Monday February 28 2022 – The day dawned with much more promising weather, although the yellow wind alert was still in force for the island (quite correctly – see later). So it was that after breakfast (including the usual very welcome couple of mugs of Earl Grey) we headed off to complete the major unticked tourist boxes for the south of the island – Caldera Colorada and the Timanfaya National Park bus tour (because you’re not allowed to walk in it).

The first part of the plan seemed to be going well when all of a sudden…. 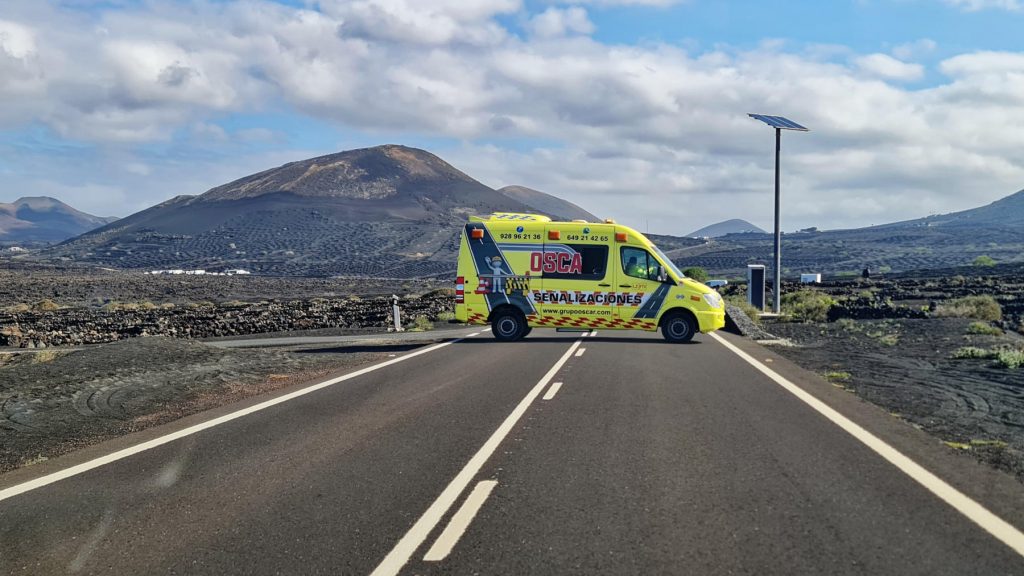 This was a temporary road block and we never quite worked out what was going on to cause it. After a few minutes the van backed away and we carried on on a completely clear road. Shortly afterwards, we parked near the Colorada crater and followed the path that led round it.

It’s quite near El Cuervo, which we walked into a couple of days ago, just a couple of kilometres as the raven* would fly if it weren’t for the bloody wind. 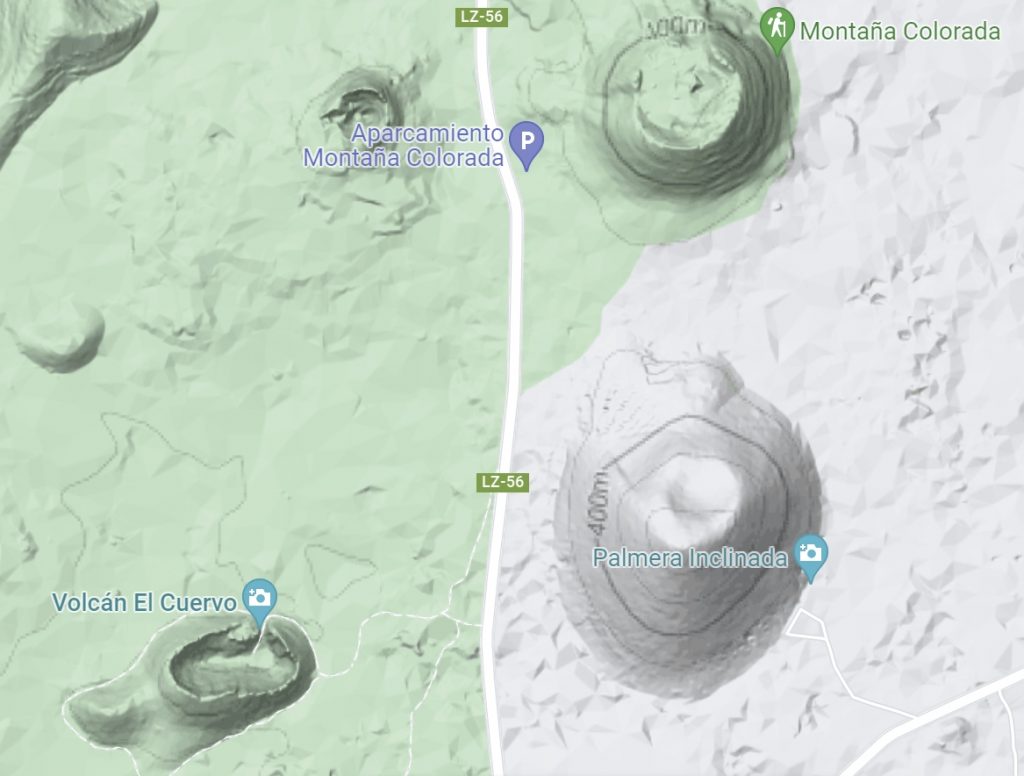 The bloody wind was practically non-stop gale force.  While it never actually blew us over, there were times it seemed near to doing so. Because of the geology (you can see from the lumps above), the northerly gale meant you were either struggling into it, or being blown along from behind, depending on which side of the hill you were.

(Parenthetical note – it’s interesting to look at the Terrain View of the area in Google Maps.  It gives a good insight into just how lumpy Lanzarote is. Colorada is marked top right and you can see Yaiza, where we’re staying, bottom left.) 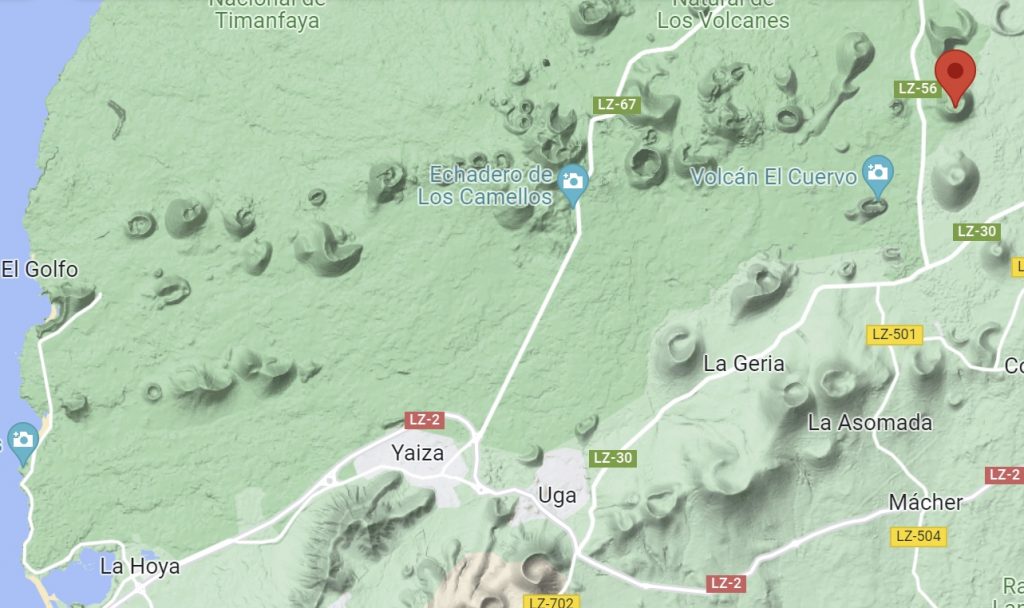 As we started the loop round Colorada, we could see Cuervo in the distance. 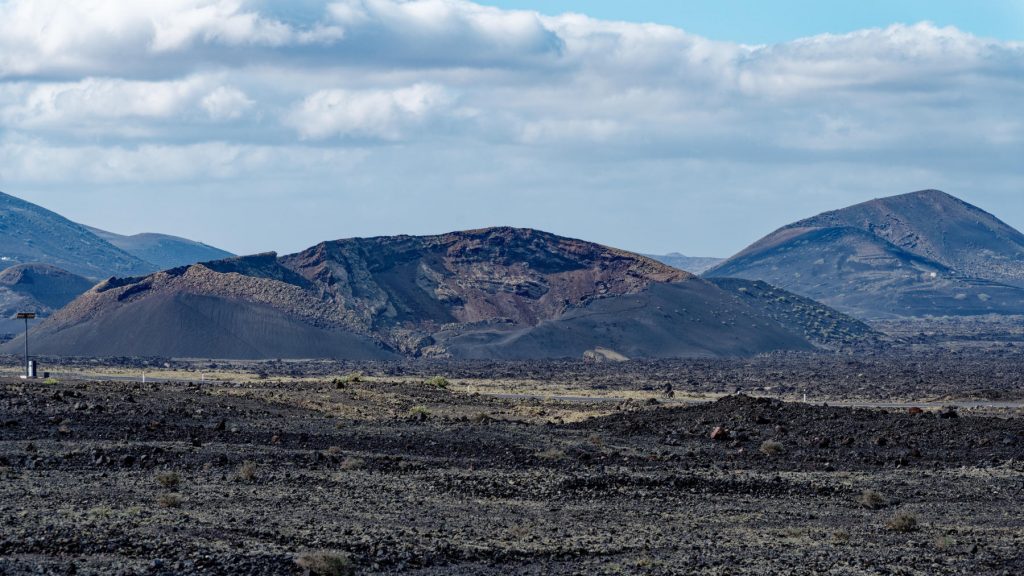 As we walked along, the coloured part of the mountain, the south westerly slope, gradually came into view. 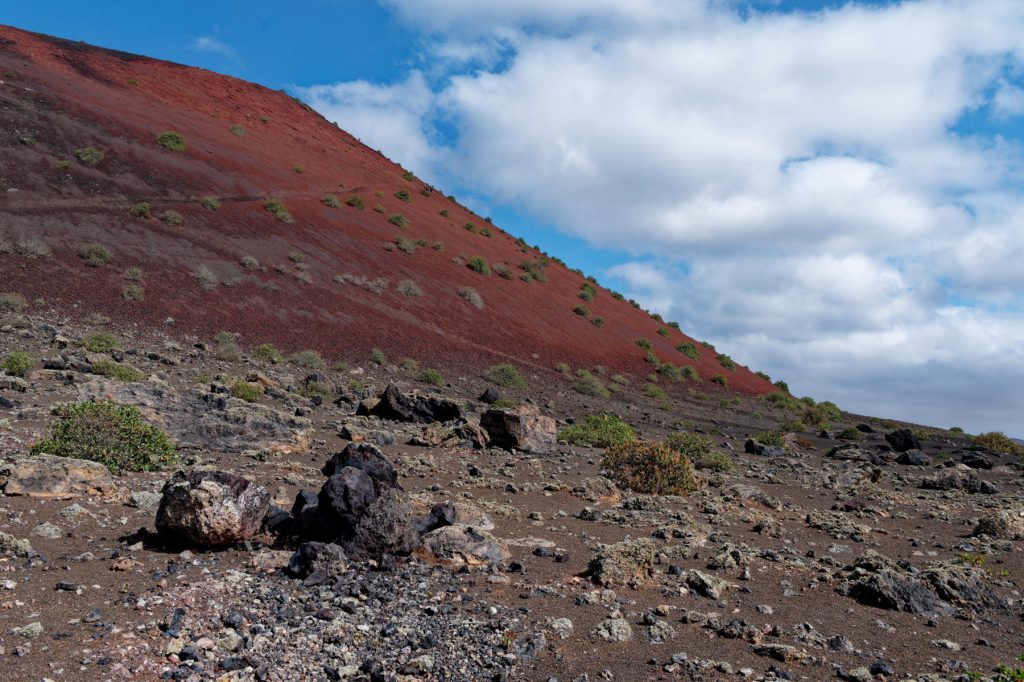 There were some people actually clambering up the side. 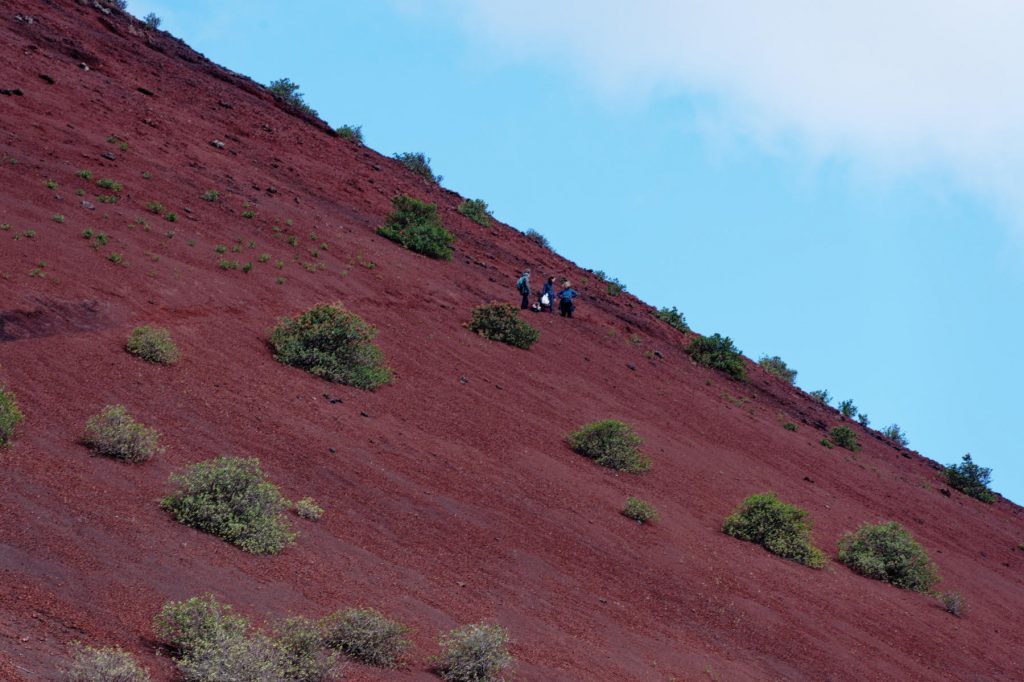 I’m not sure whether this is allowed, but there’s a sort of track leading up at an angle, so I suppose people do it regularly.  We decided against it and carried on until the full glory of the coloured slope was revealed. 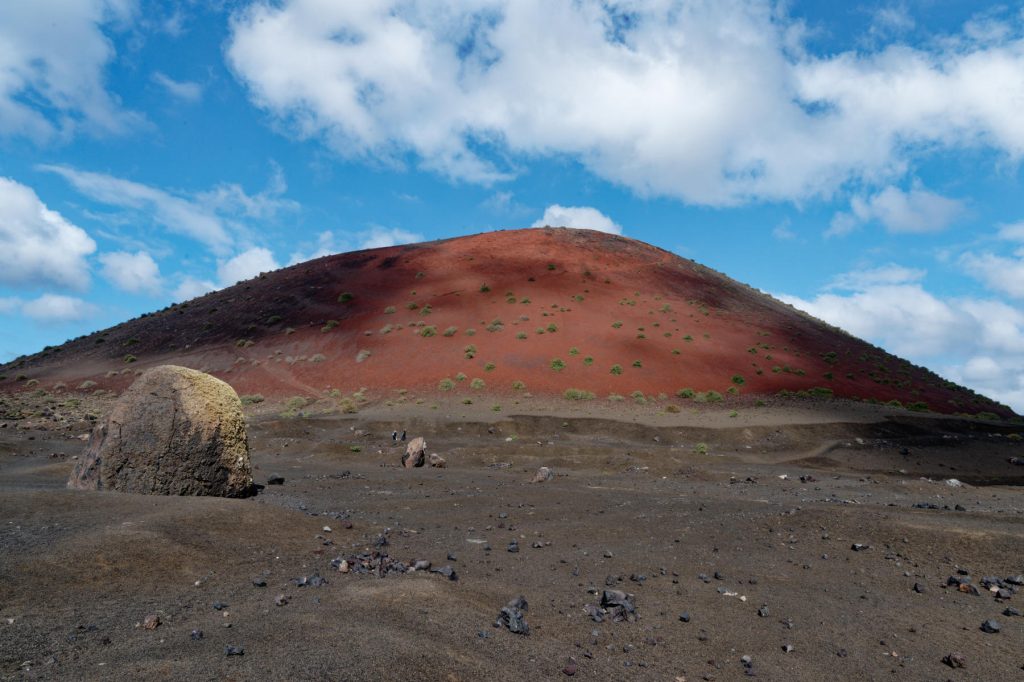 The lump in the foreground is a massive rock, called a “Volcanic Bomb”, which gives you an idea of how it got there – not something to be standing under as it came out of the sky. The red volcano’s colour is caused by a richness of iron oxide in the cinders that poured out during its eruption – among the last of the Timanfaya eruptions in the 1730s.

As you can infer from the terrain map above, the area has no shortage of substantial hills, each evidence of volcanic activity and each having a different colour cast. 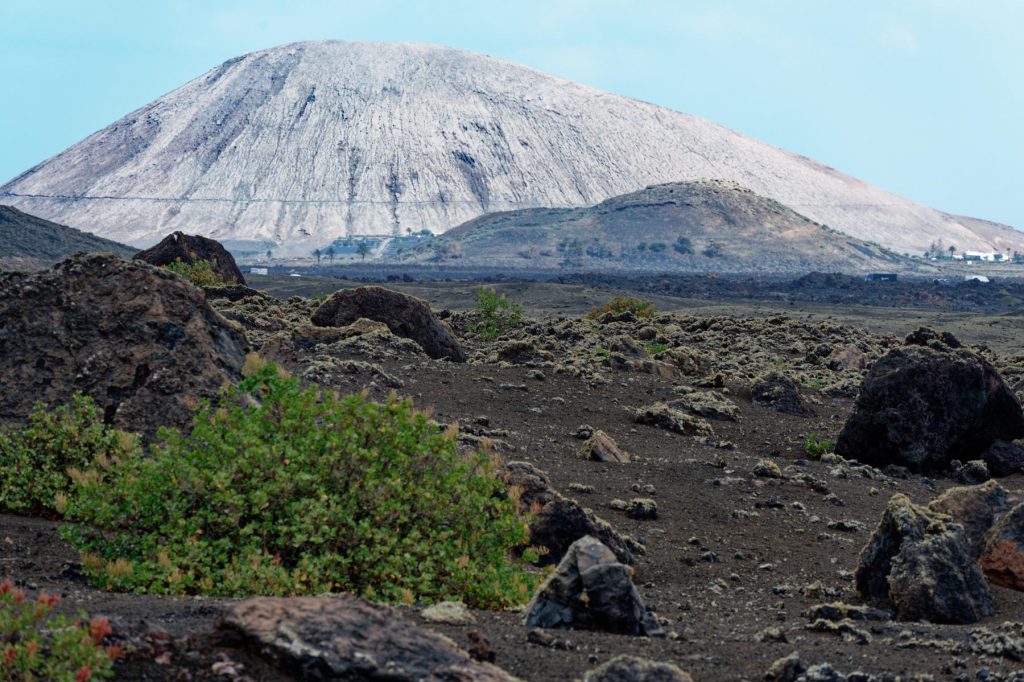 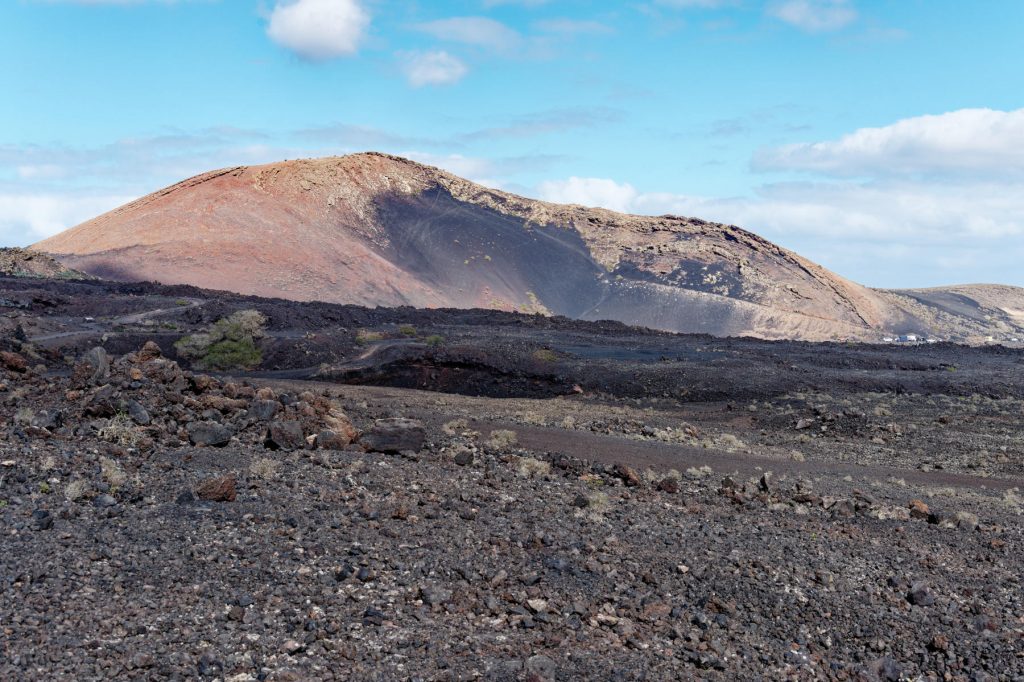 The photo above is of Montaña Ortiz (so tiz).  Almost unobserved in the foreground we spotted a pink geranium, just about holding its own against the wind. 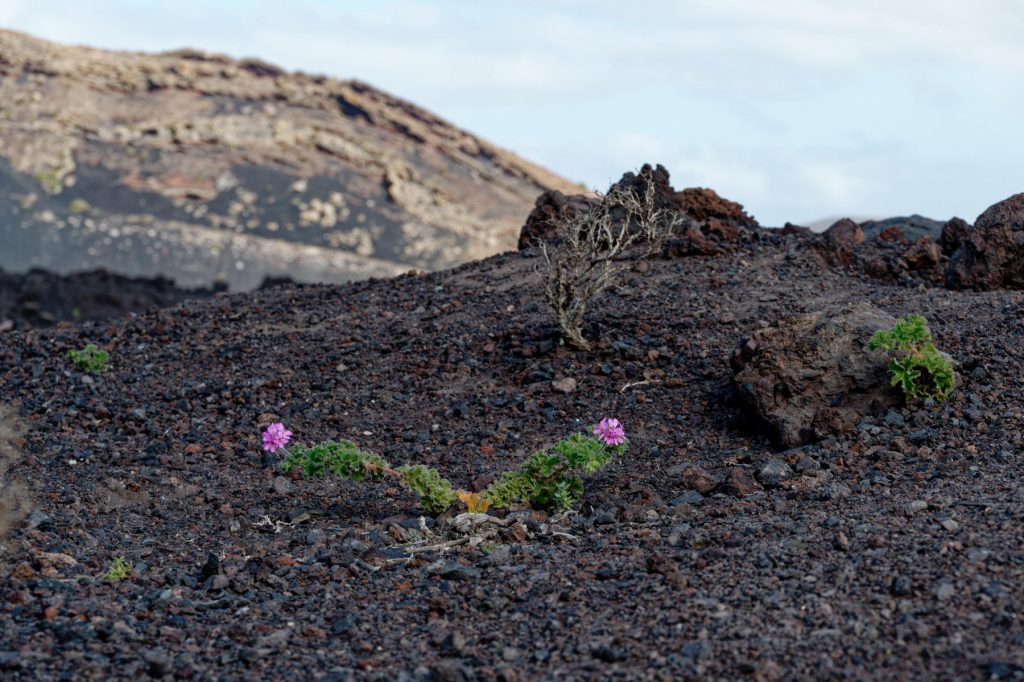 One nearby volcano, Volcán de Las Nueces, provided a final striking image for the walk. 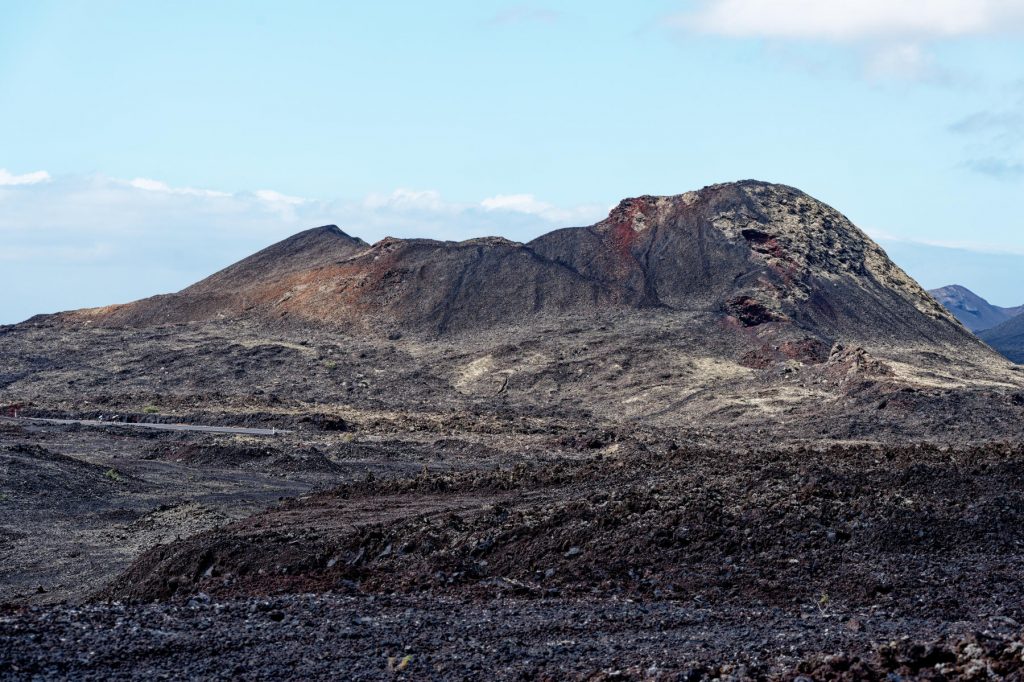 It’s a walk well worth doing; there are over a dozen information boards at strategic points around the volcano, giving insight into the geology at work and its effect on the landscape.

Our cobwebs having been thoroughly blown away, we set out to tick the other boxes – the Timanfaya Visitor Centre and the Timanfaya National Park itself.  The former is quite large and has a lot of information for those who are interested in the specifics of vulcanology, but somehow didn’t grab our attention, so we didn’t stay long. Had there been a coffee bar, we might have taken a breather, but there isn’t one.  There are toilets, though….

The day’s plan came severely unstuck some 4km down the road from the Visitor Centre, when it became apparent that the queue for the National Park was huge.  Traffic was backed up in the opposite direction for several hundred yards, so we decided that no bus trip was worth that amount of aggravation.  An early lunch seemed a good idea, and we had a recommendation of a specific restaurant – El Pescador in Playa Quemada. It turned out that getting there early (about half past midday) – without a booking – was a good idea as it soon got really quite busy.  We had a good lunch with a mixed fish grill, and we’re happy to add our vote for the place. 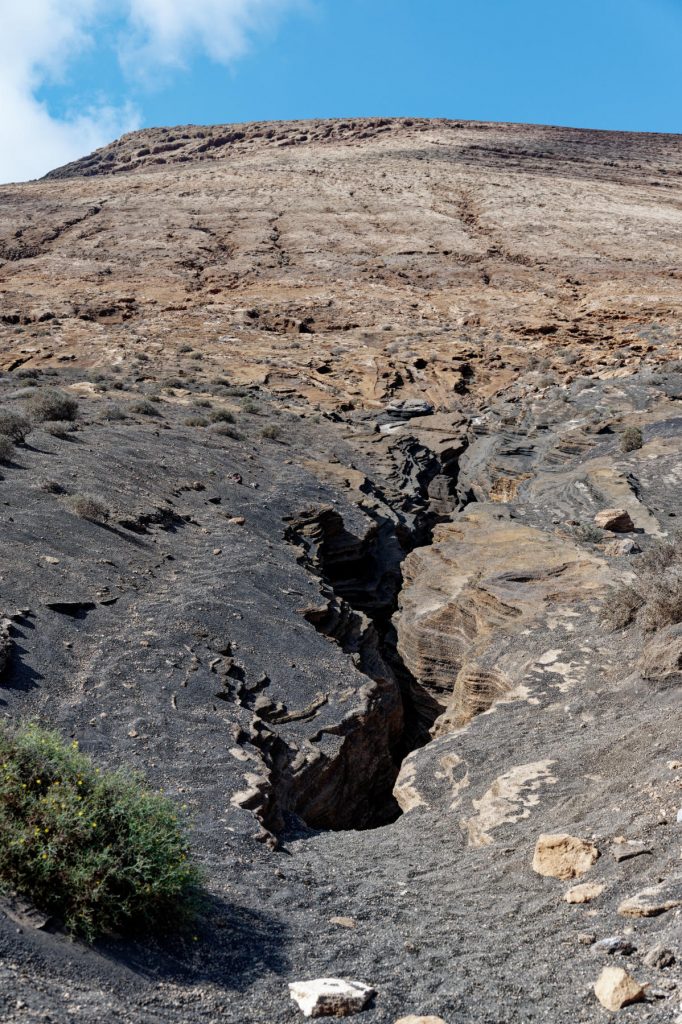 But climb in, and it’s pretty dramatic. 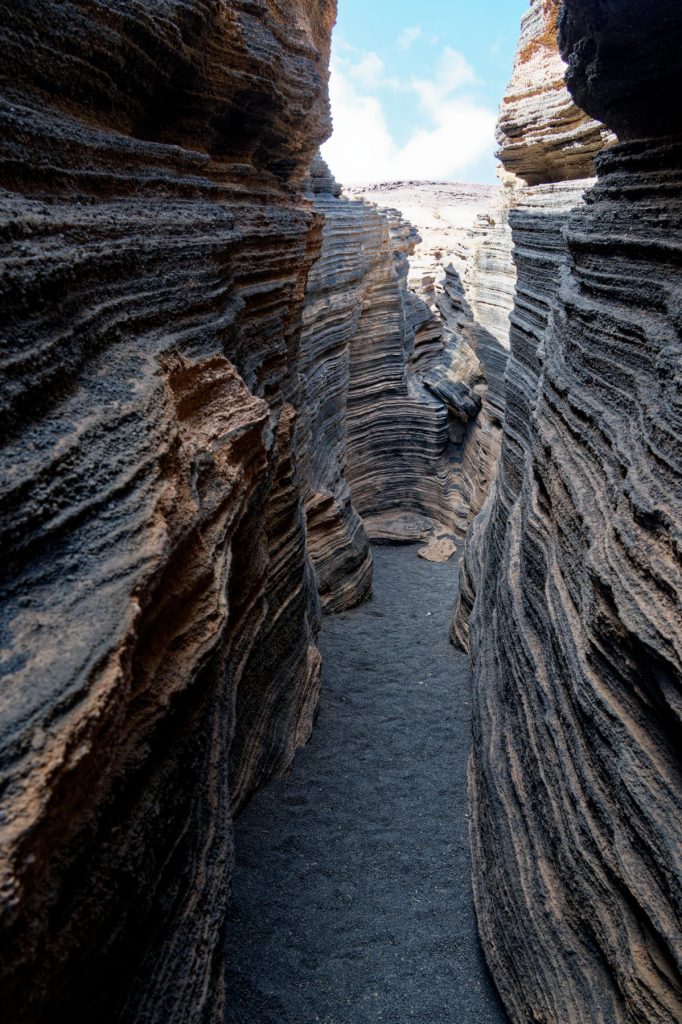 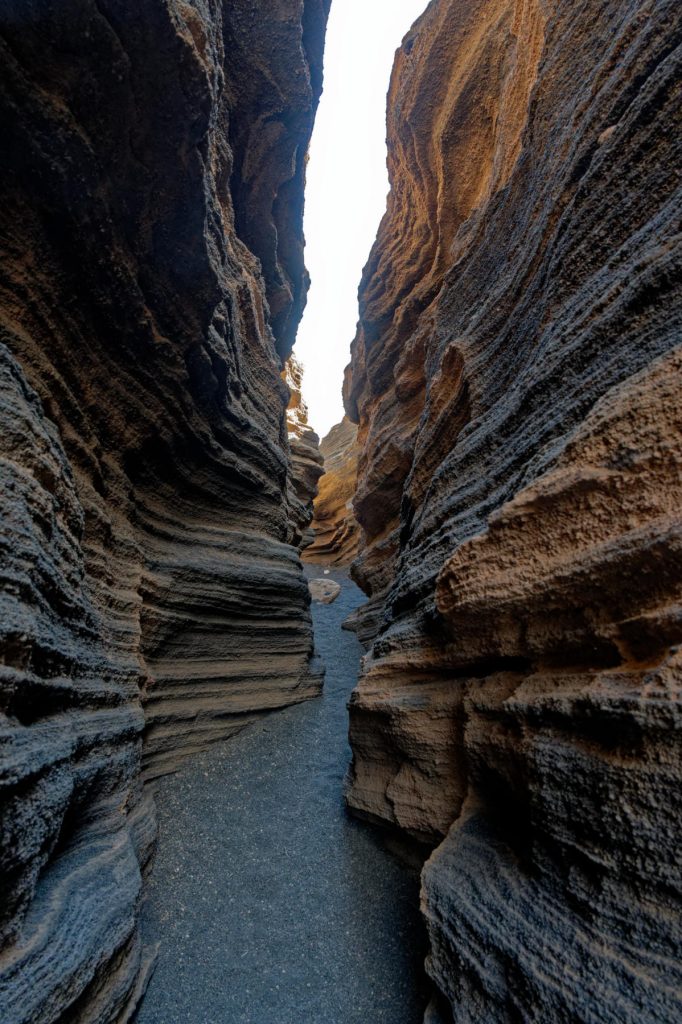 A person can just about squeeze through, and it’s a little tough to climb in the loose gravelly surface, but thoroughly worth it, even though you get shoes full of the little stones. 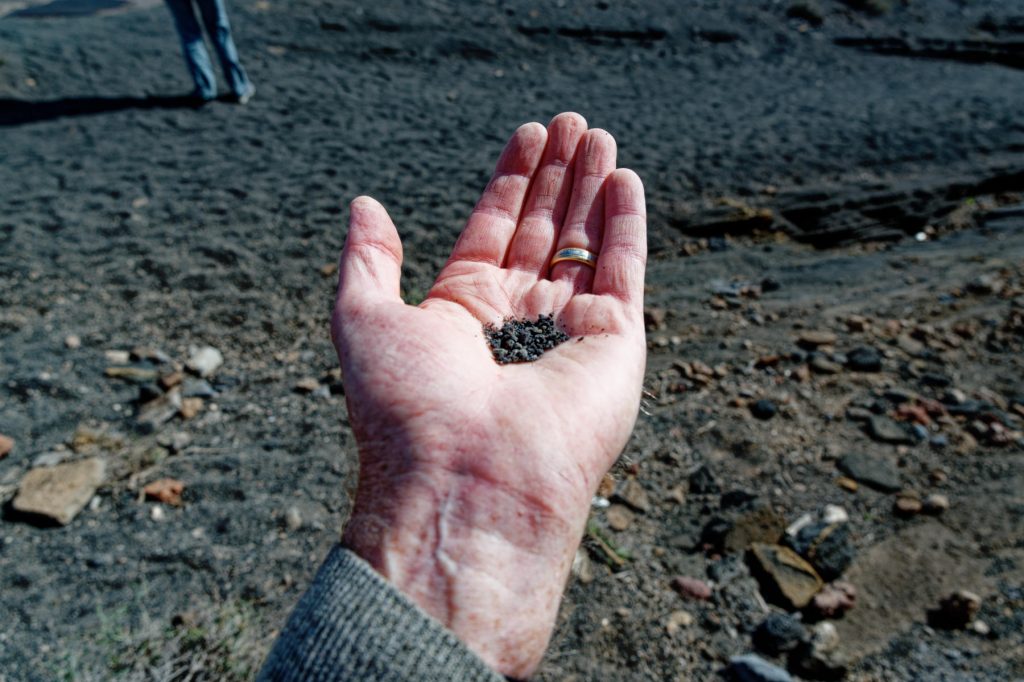 (That was just one shoe’s worth.)

As we headed back to the car, we noticed a couple of young people seemingly camped out beside it.  When we got there, it turned out that they were a French couple who had no transport.  They couldn’t call a taxi because there was no mobile signal and they asked us if we could give them a lift to the airport. They were lucky – Jane’s French is very good, courtesy of the time she spent living in Paris, and so it seemed reasonably safe to help them out – the airport was only a couple of miles away.  So that was our Good Deed For The Day – they were very grateful.  We never established exactly how they managed to get themselves to Las Grietas, but we were glad to help them, anyway.

We resumed our original plan, which had been to see some of the northerly bits, with the possibility of visiting The Other salt factory, Salinas De Los Cocoteros.  En route, it became clear that we were heading into César Manrique country, as this installation on a roundabout showed.

We were by then close to the César Manrique Foundation, set up to allow people to visit the house that was his home from 1968 – 88, and also the setting for a gallery of some of his art – and at the moment still home to a celebration of the centenary of his birth in 1919. As you might expect, it’s a striking place, with a cactus garden outside it 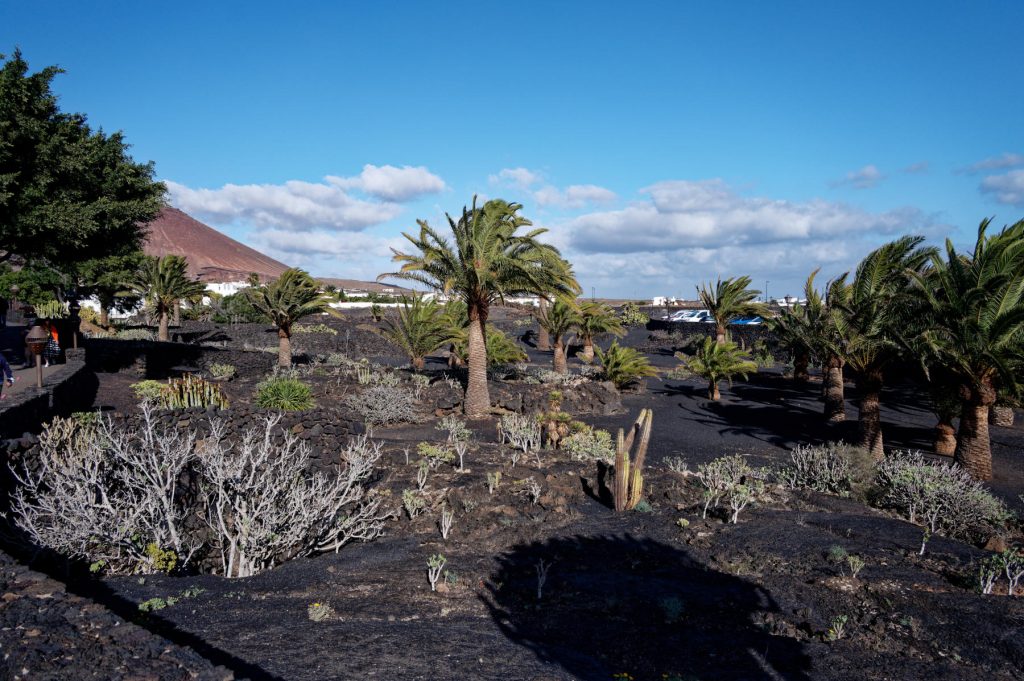 and another of his wind-driven mobile art works by the entrance. 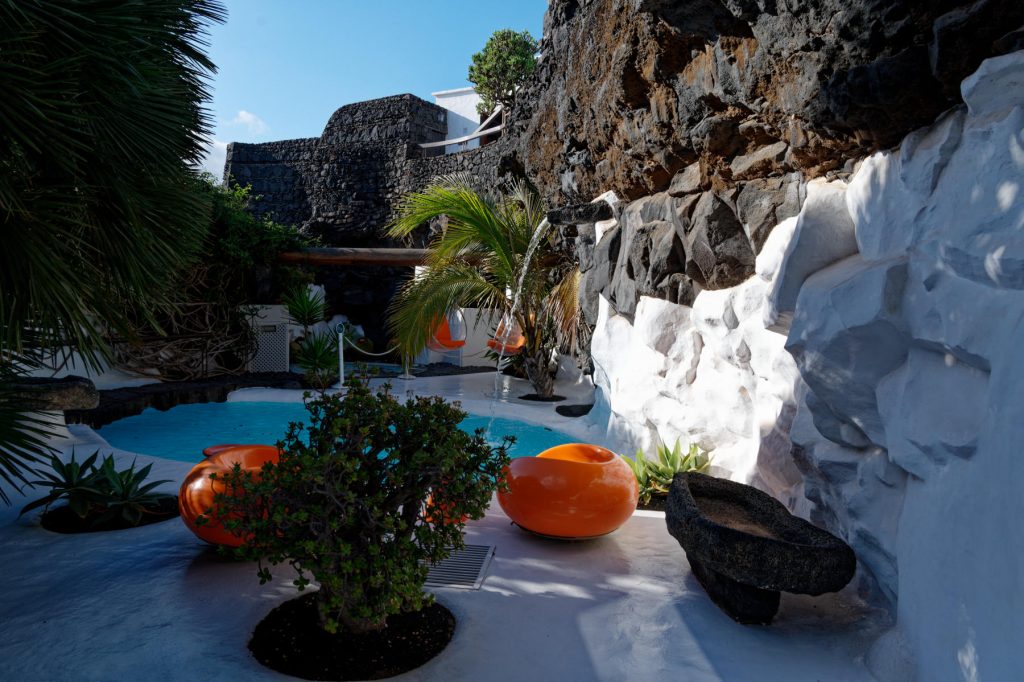 and the general atmosphere is very congenial. 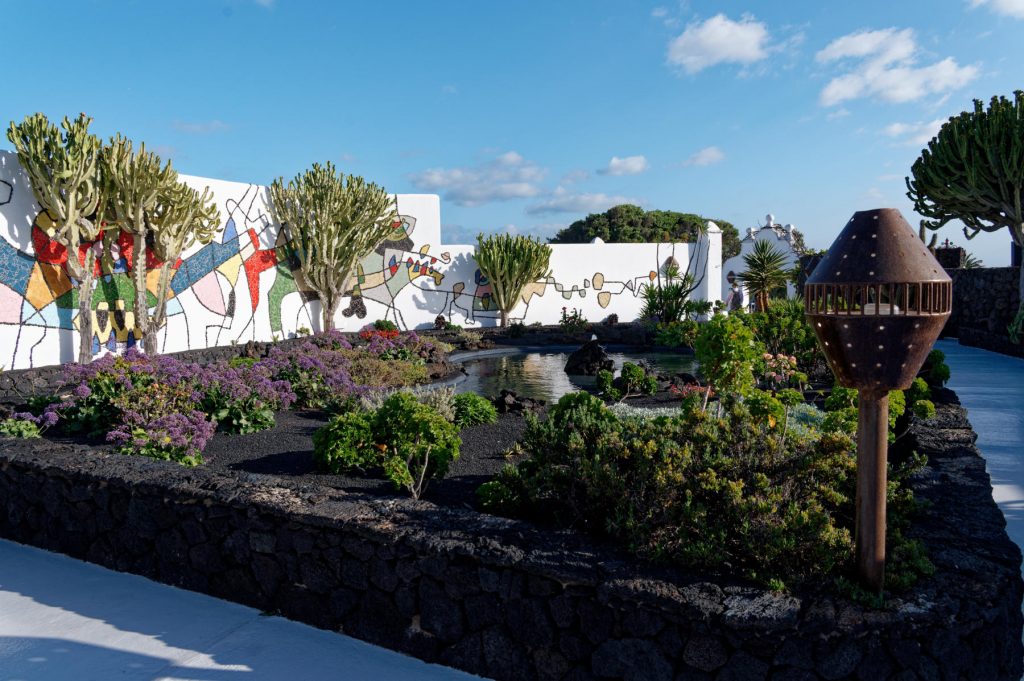 Just by the house is a roundabout where Manrique was killed in a road accident in 1992.  There are two more of his wind-driven mobile artworks by and on the roundabout to mark the scene.

Our next stop was a feature nearby called the Stratified City (known in Spanish as Antigua rofera de Teseguite), which is a large set of rocks which have been created over the course of thousands of years by wind, sun, and rain. It’s quite a sight. 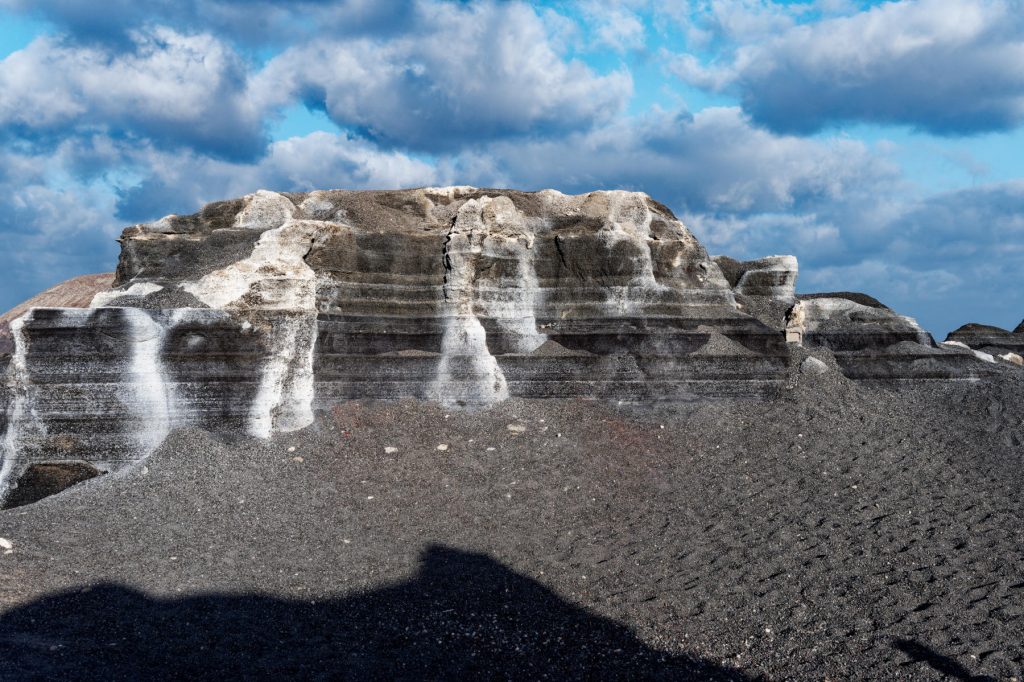 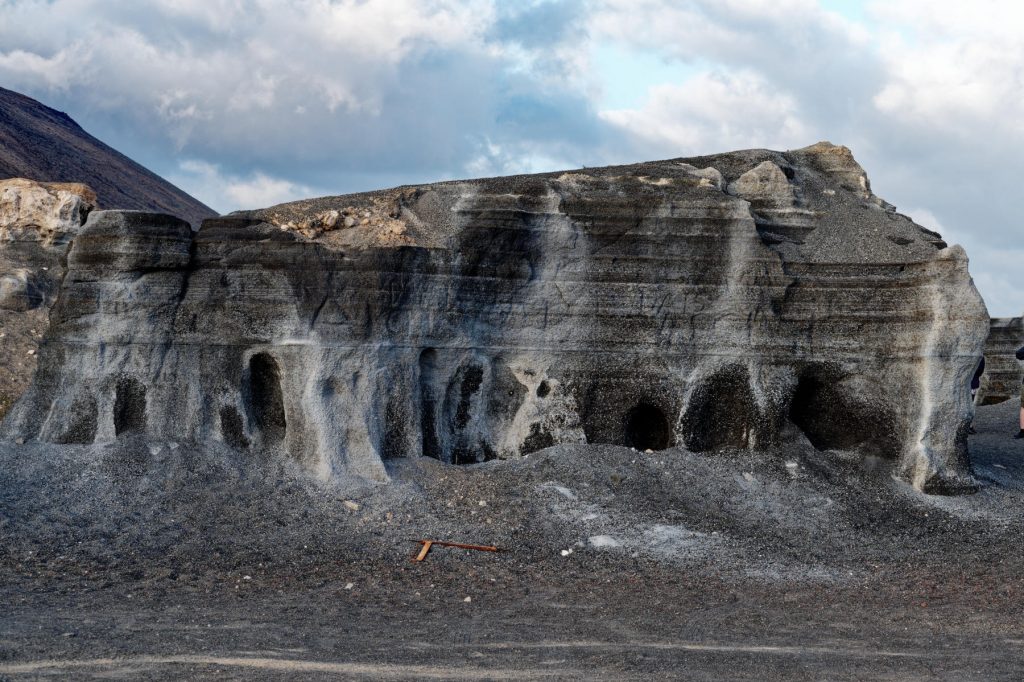 It’s also quite a site for idiots leaping about and taking selfies, but that’s just my age showing again.  I still don’t understand the thought process that says that a fabulously old geological feature can somehow be improved by having a gurning face in it. Anyway, we wandered off the main part and found a few quieter places for photos, and it’s quite an awesome place. 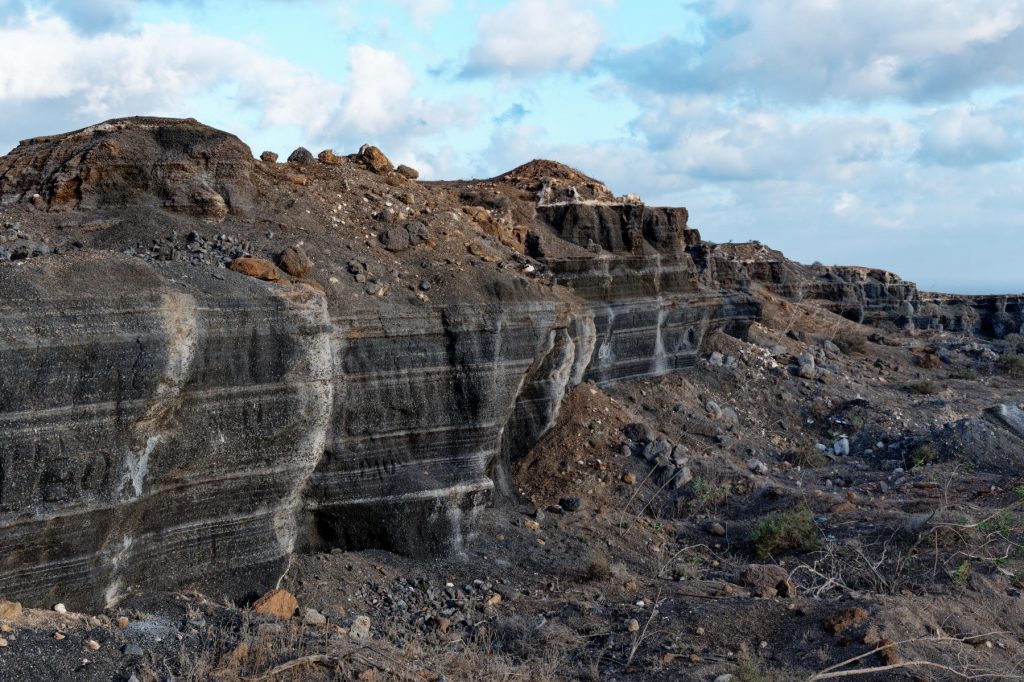 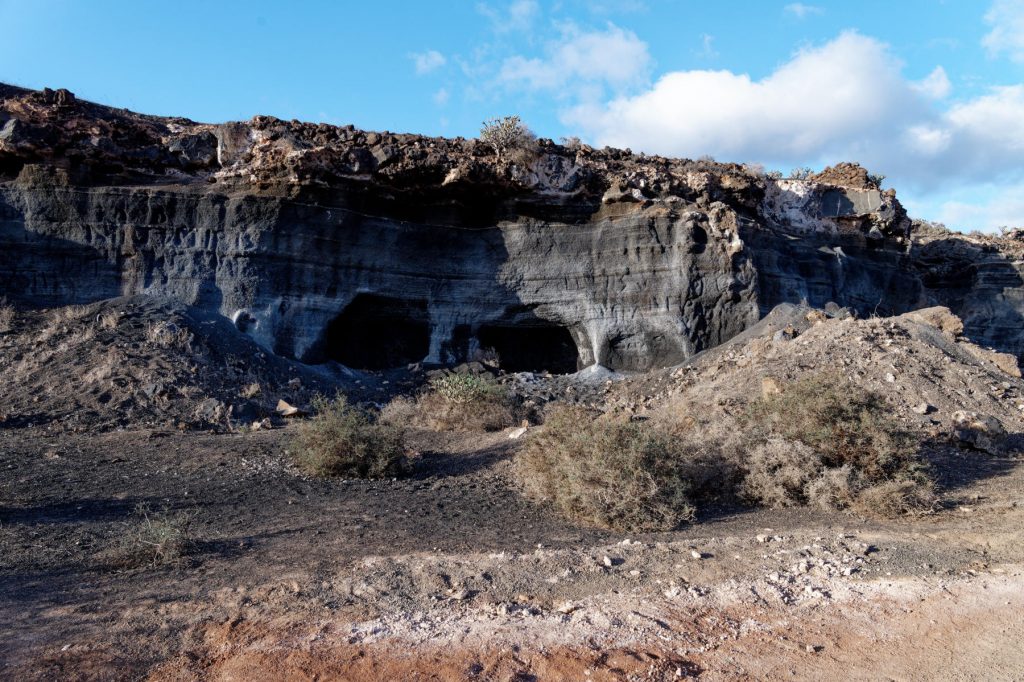 By this stage, the sun was nearly setting so we decided that Salinas De Los Cocoteros would have to wait for another day and we headed back to the hotel for a quiet evening.  We still have many, many tourist boxes to tick in the north of the island, and it looks like the weather tomorrow will be as nice as today’s – and a lot less windy.  So please check back in then and see how we got on, won’t you?

* El Cuervo is Spanish for raven…