We needed a prompt start, as we had a ferry to catch as well as a load of relentless tourism to undertake. Hoping against hope that we would have nice weather, we lifted the blinds and peeped out… 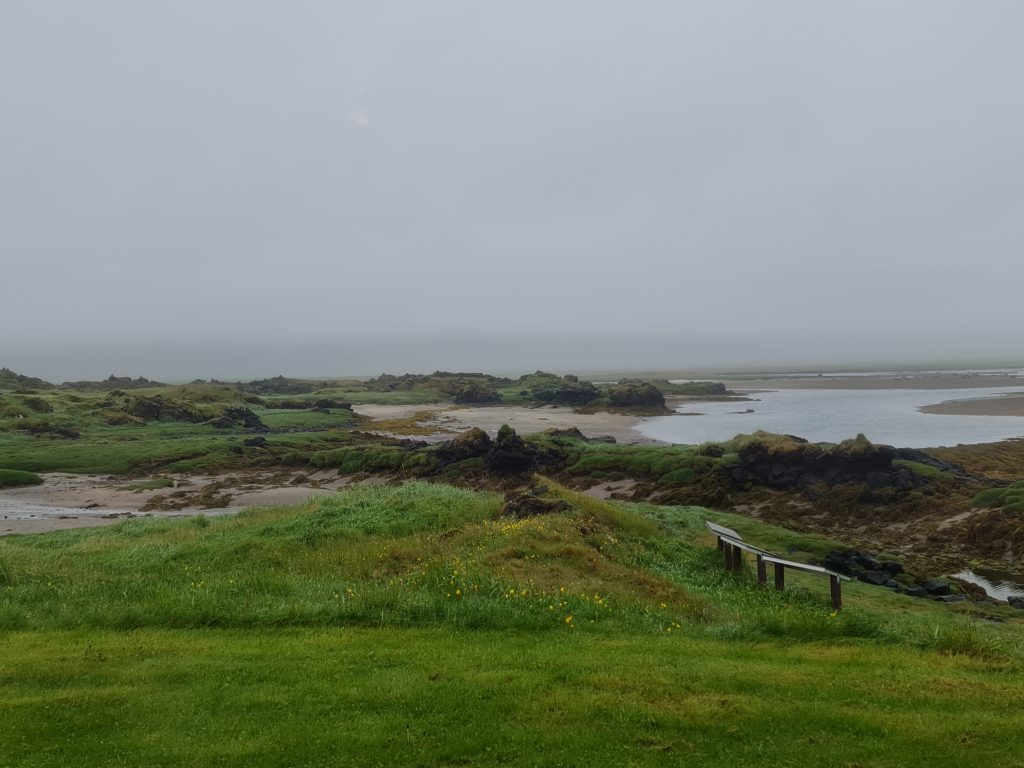 Oh, well…..the only thing to be seen were some sheep which had drifted up overnight by the hotel. 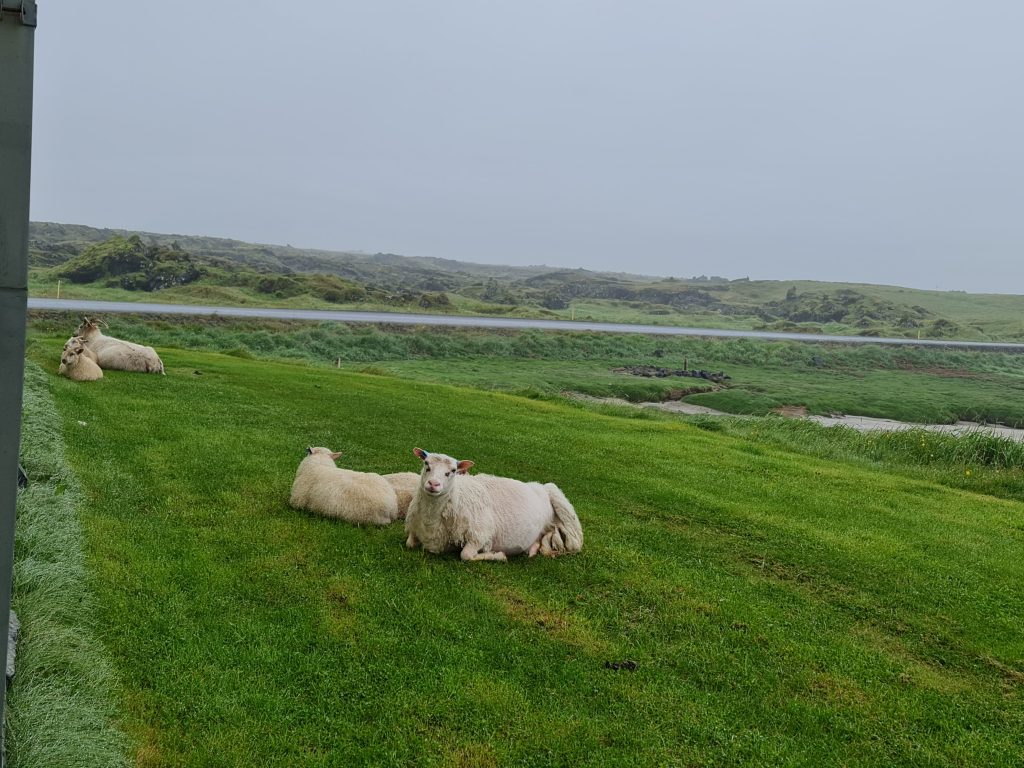 We got up, breakfasted and checked out – I studiously avoided any mental calculation of the awful truth about our bar bill – in time for a 9am start. Our first photo call was the Black Church just a short way away, which would have had a lovely backdrop of the Snæfalljökull glacier, had the driving fog and drizzle not obscured it. It left rather a desolate scene, to be honest. 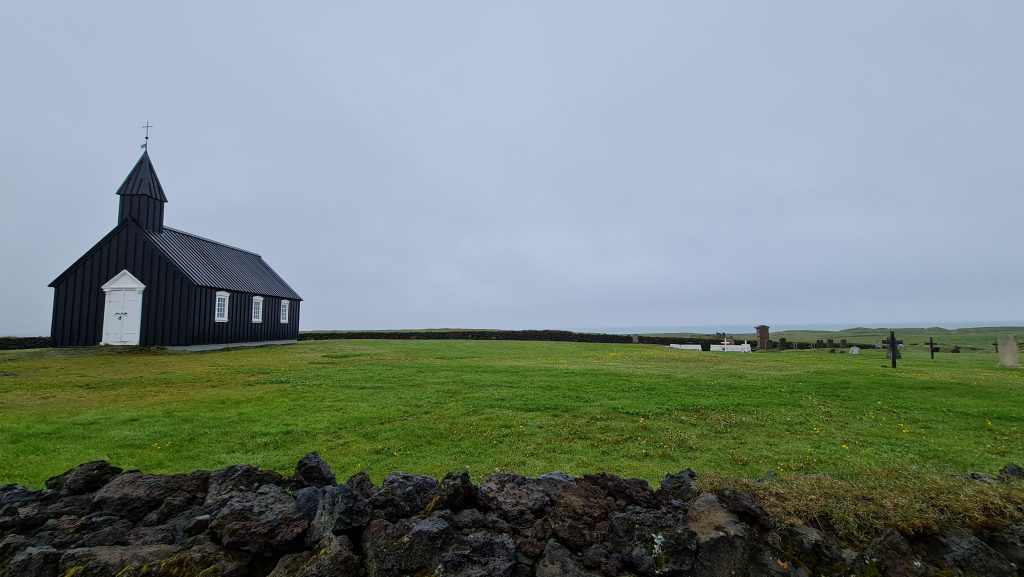 This was to be a hallmark of the morning – wind all the time, rain quite often and temperatures around 11 or 12C. Despite this, Dagur found us some interesting things to see and photograph.

For example, the dismal weather couldn’t detract from this viewpoint on the road towards a fishing village called Arnarstapi, 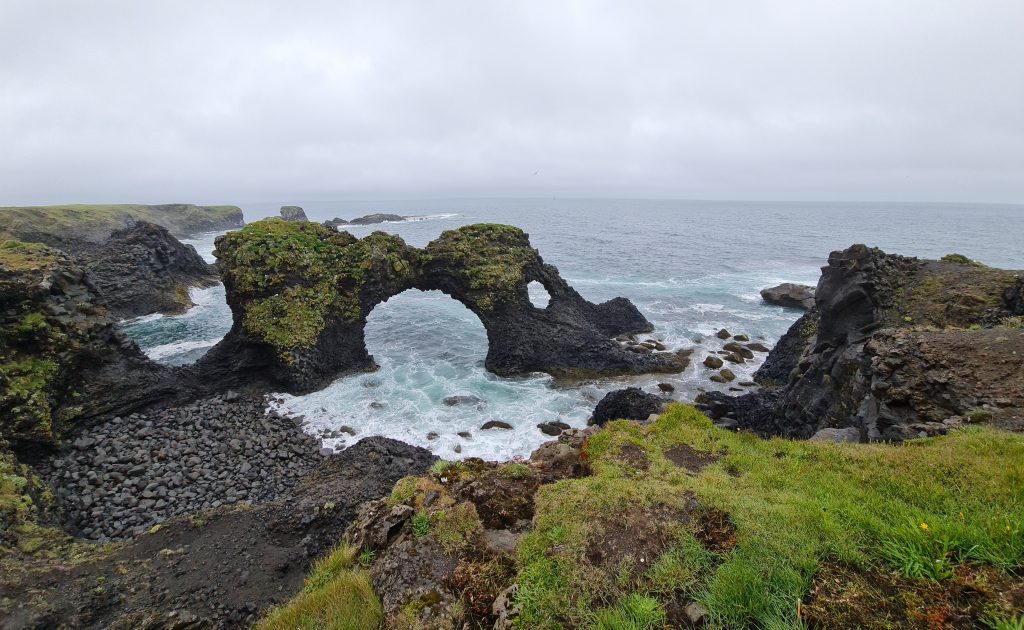 And the village itself features some enormous basalt columns 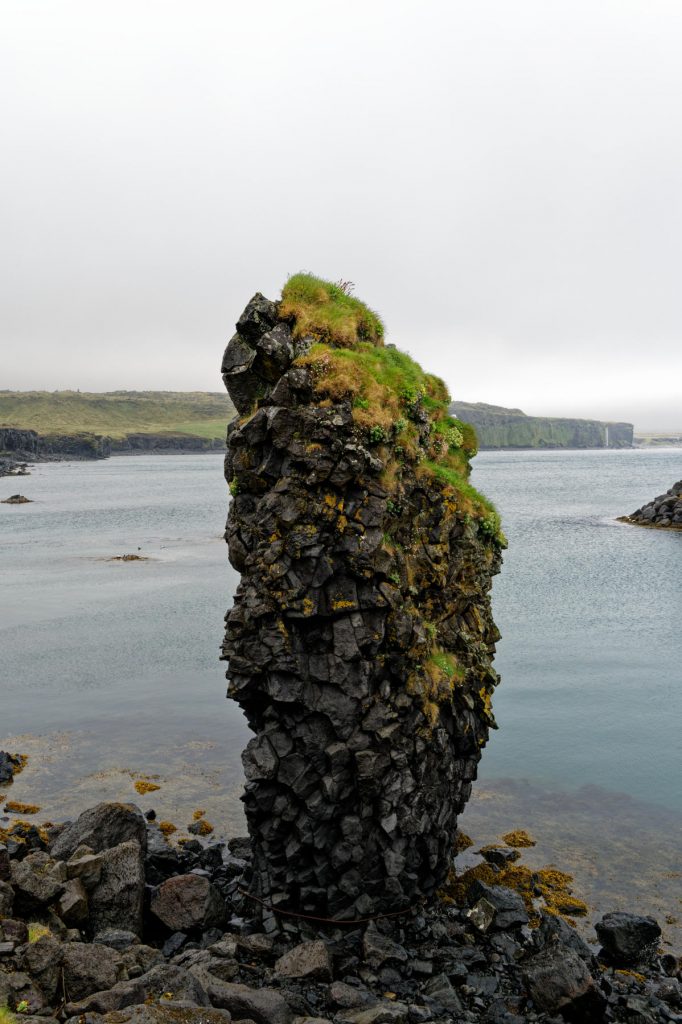 among which nestles a very photogenic cottage – one of the most famous in Iceland, Dagur said, because of its location. 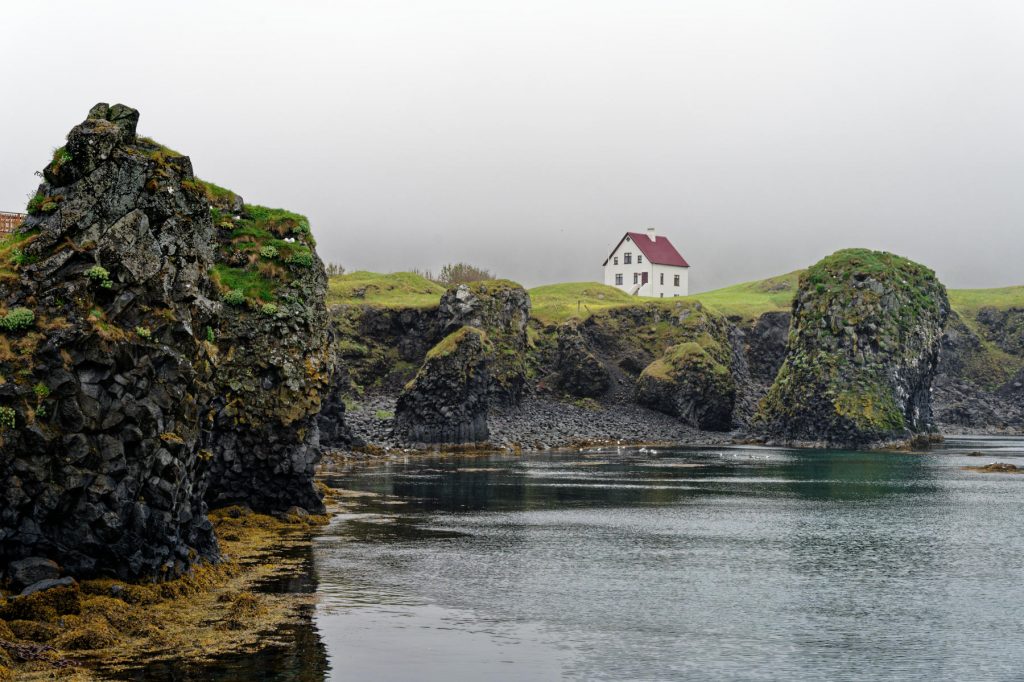 This visit gave us the first example of one of the other hallmarks of the day – cliffs lashed by the sea and crowded with nesting seabirds (guillemots, kittiwakes and various sorts of gull). 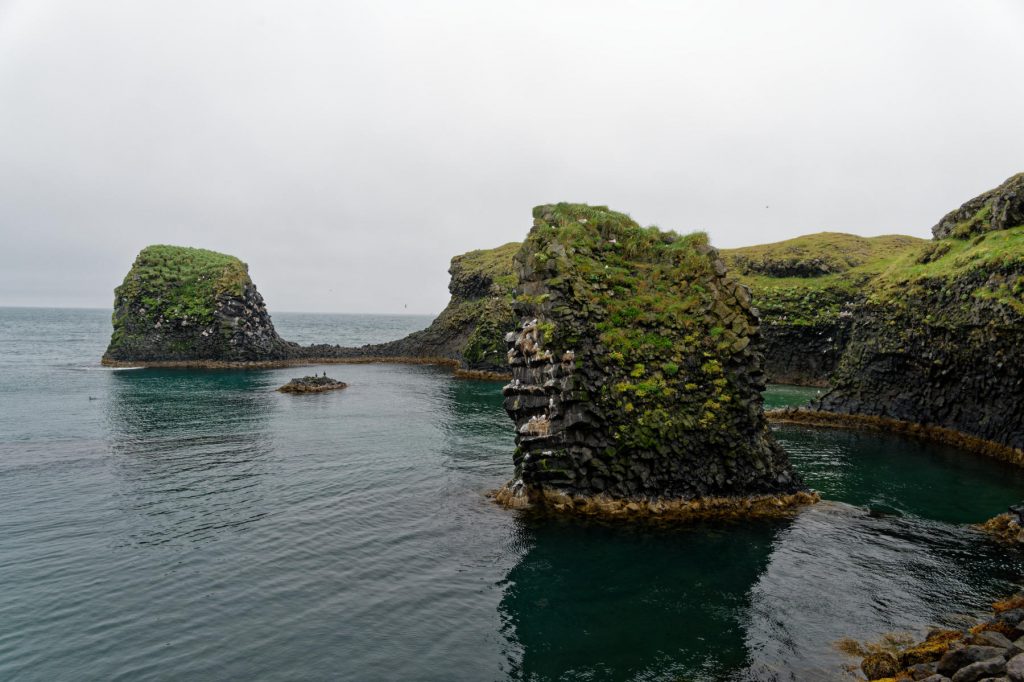 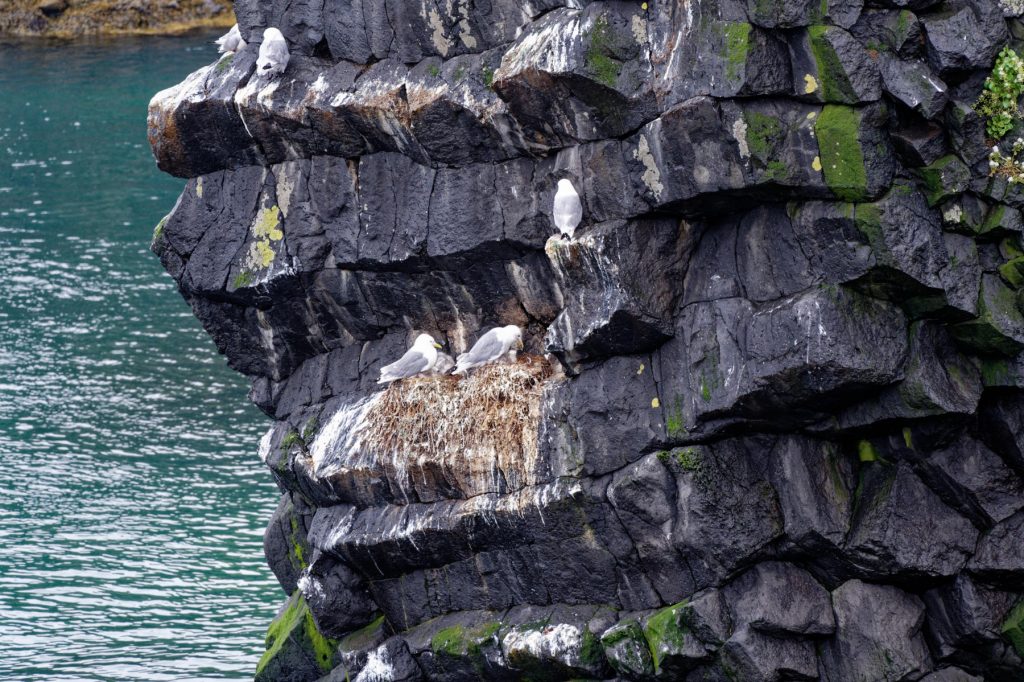 A seal was playing around in the harbour and popped up to take a look at us. 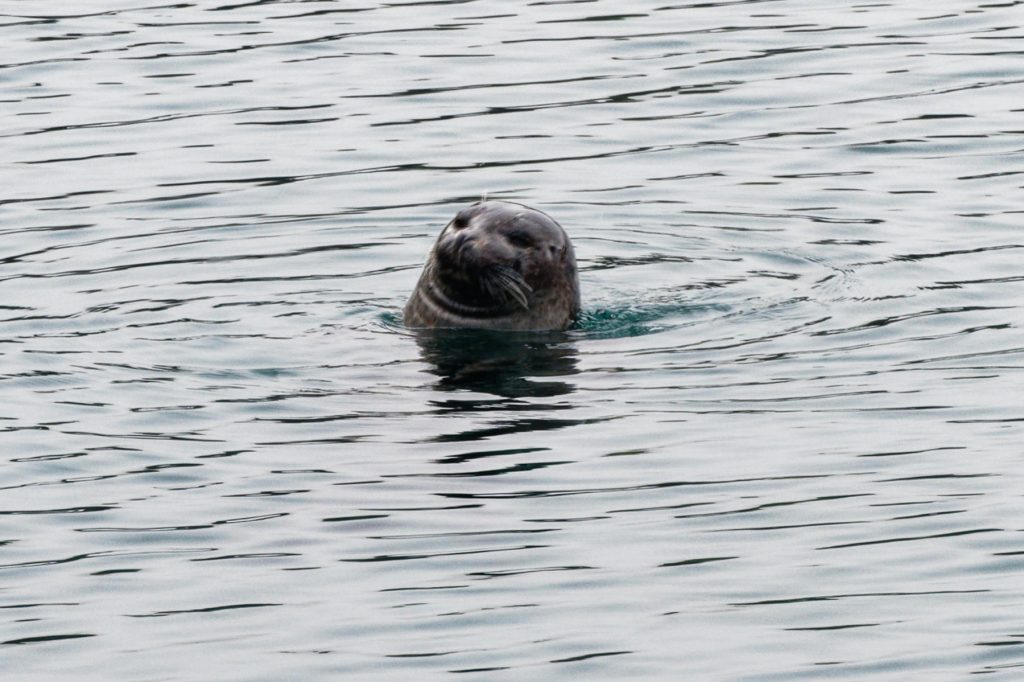 Just down the road could be found a giant troll statue, of Bárður Snæfellsás – the Mythical Protector of the Snæfellsnes Peninsula in West-Iceland 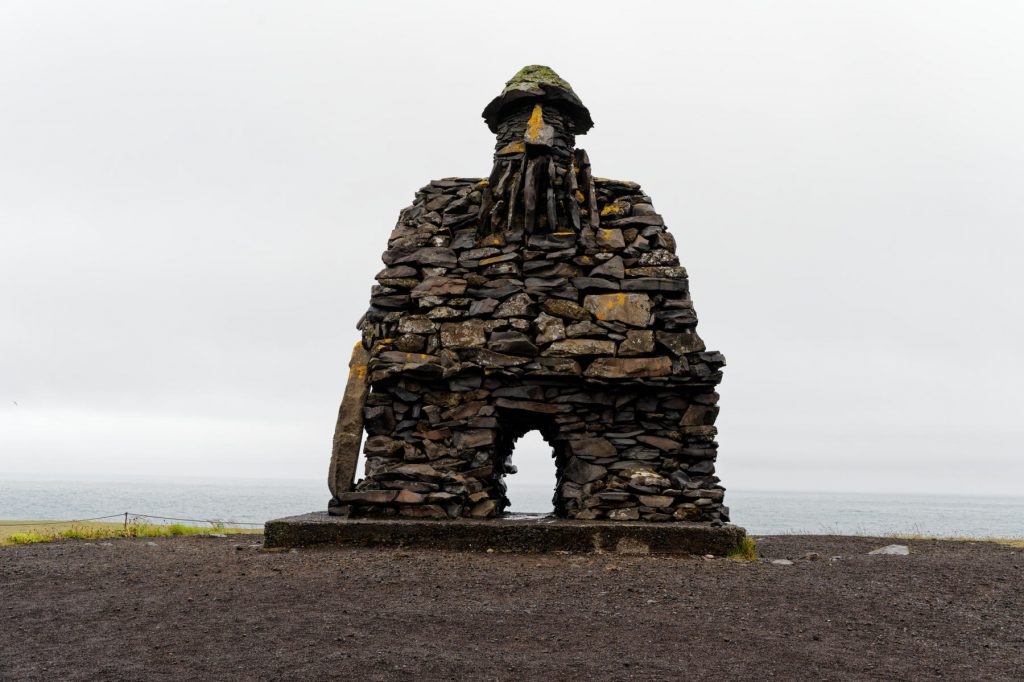 It is said that it is lucky to go through the tunnel underneath, so Jane immediately went through whilst I decided to take the risk of bad luck instead; it would have been very undignified for me to get stuck, which seemed a distinct probability to me.

Basalt cliffs with seabird colonies are two a penny around these parts of Iceland, but this one, near old Bárður, is pretty striking – you can see seabirds flying in and out of the cave which forms part of this stretch. 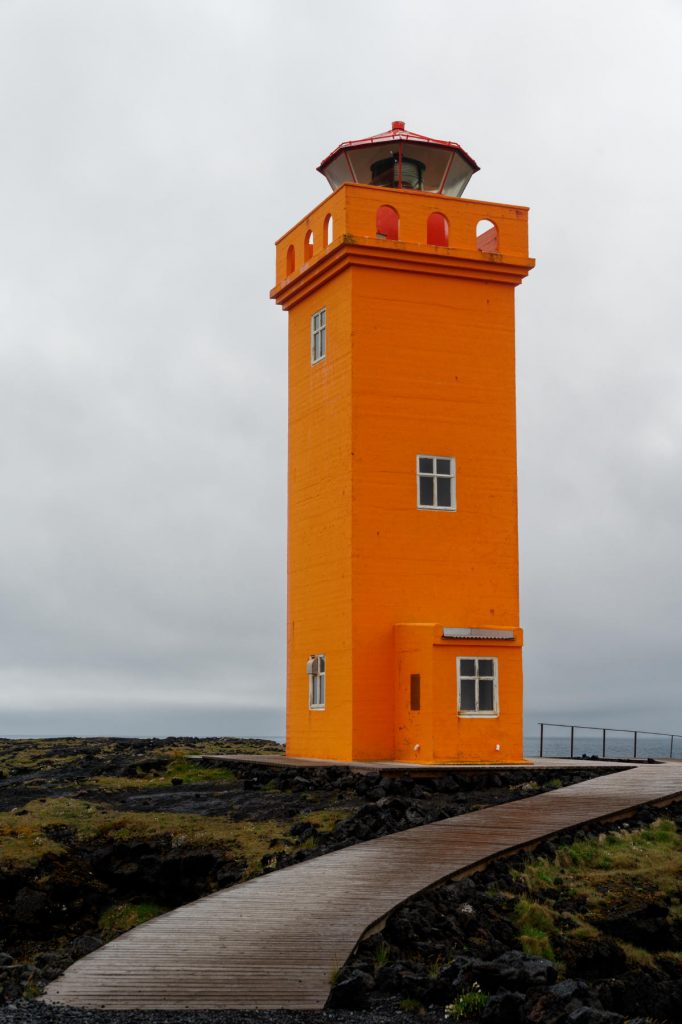 (which, by the way, has a baby brother just down the road) 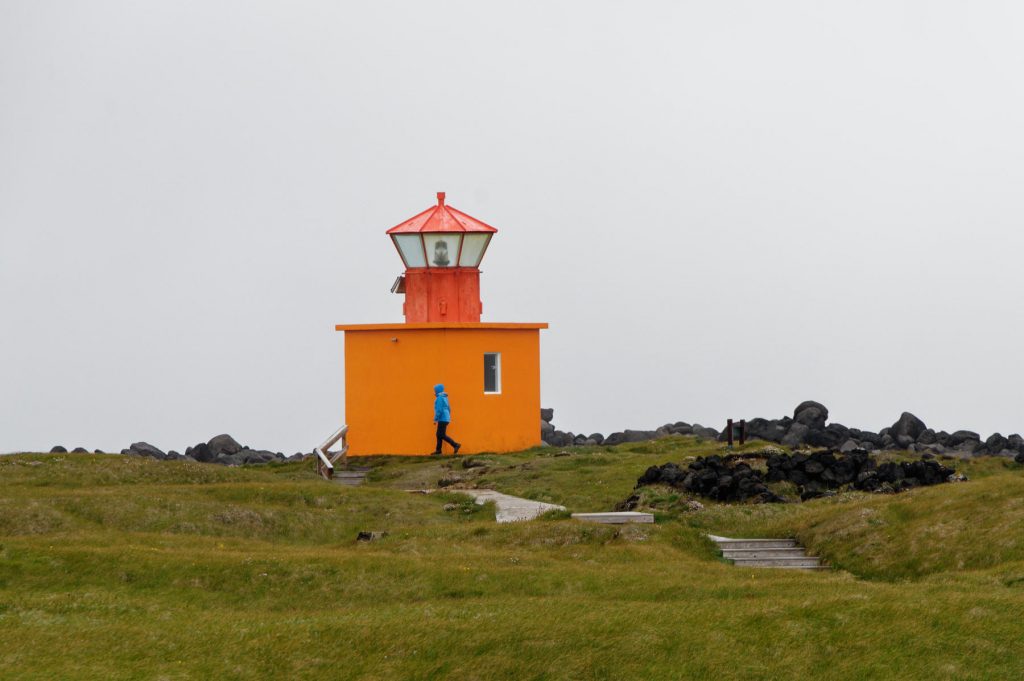 It’s a good location to show the waves lashing in. 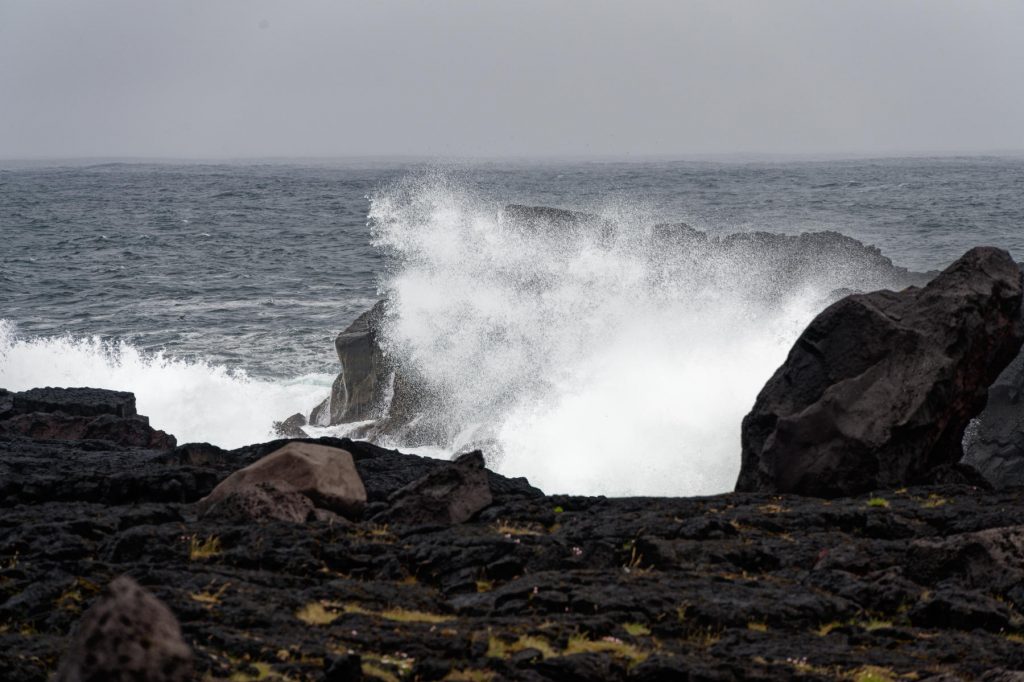 Generally speaking, this part of Iceland, the Snæfellsjökull National Park, is a pretty desolate landscape, consisting largely of black lava and yellow moss 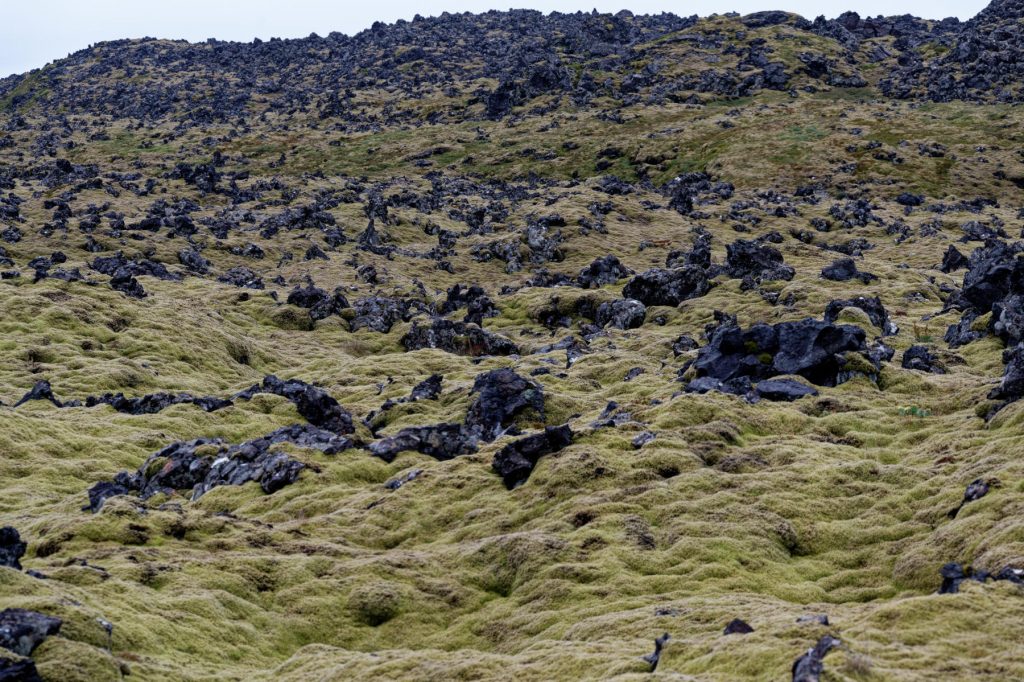 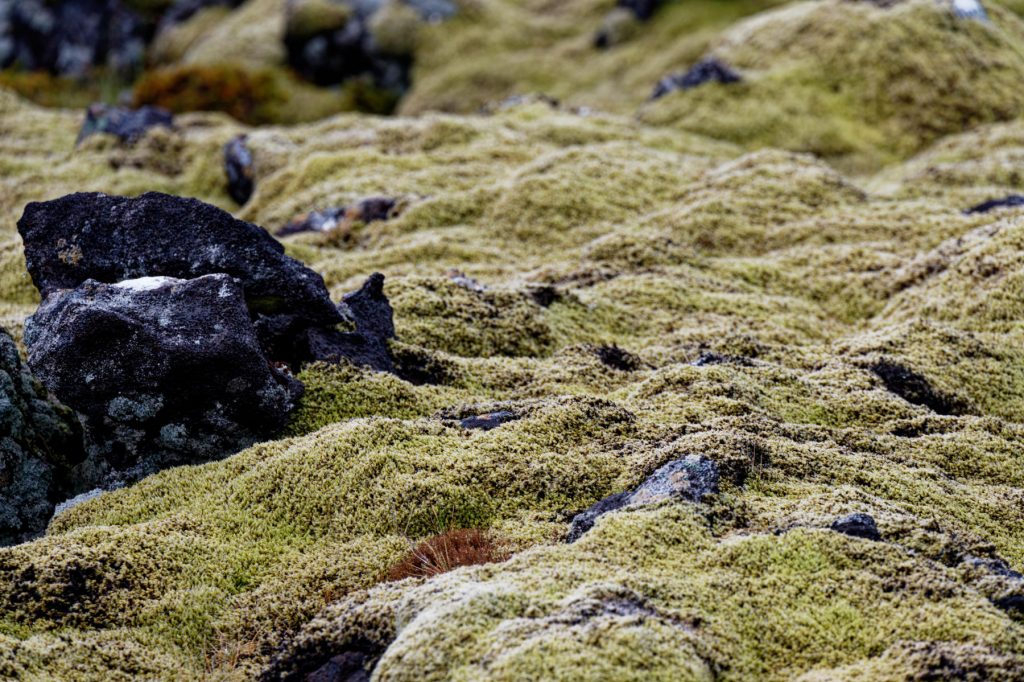 Because this is just lava, it’s not fertile enough to sustain the growth of grass or other plants – volcanic ash makes for fertile earth, but lava doesn’t.  Only moss can grow, and the land can’t be used for anything agricultural at all.

The cliffs occasionally have an unusual feature such as this, which tremulous locals once thought was a troll. 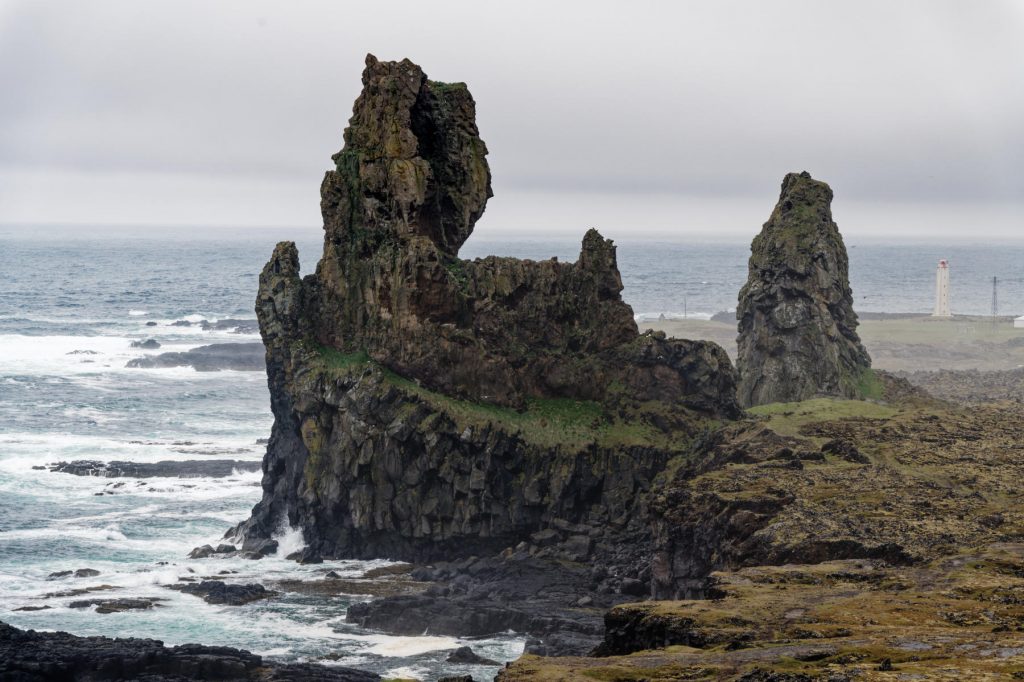 but otherwise the landscape was bare, apart from a visitor’s centre, which actually showed a picture of the Snæfellsjökull glacier.  So, even though we couldn’t see it, we had some idea of what it might look like if the fog lifted.

Our next port of call was a fishing village, Öndverðarnesviti, which featured some extraordinary building art. 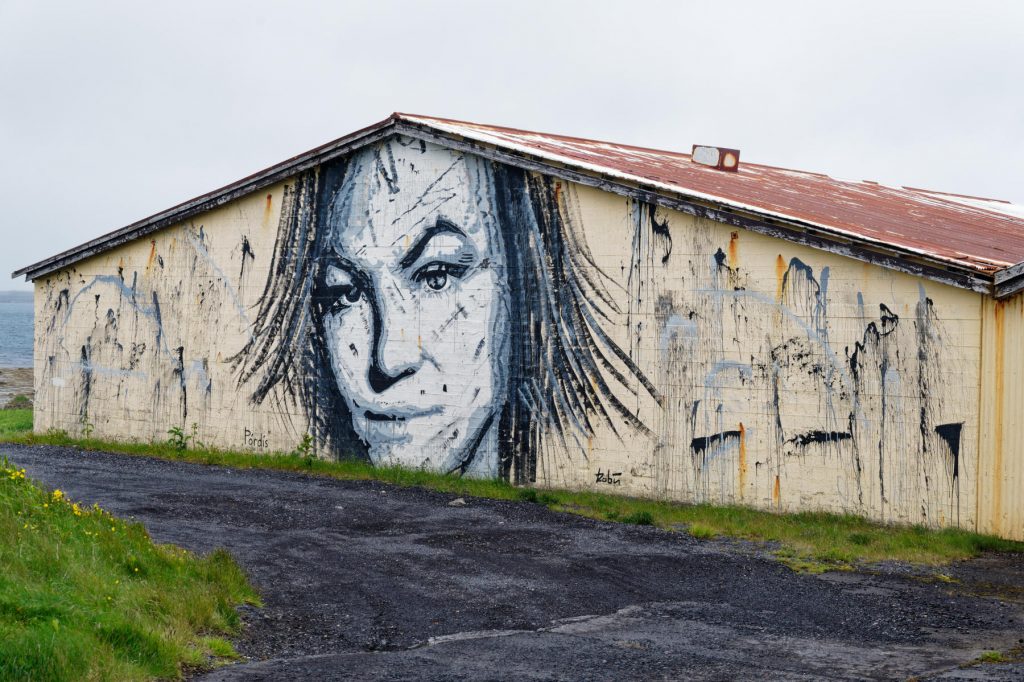 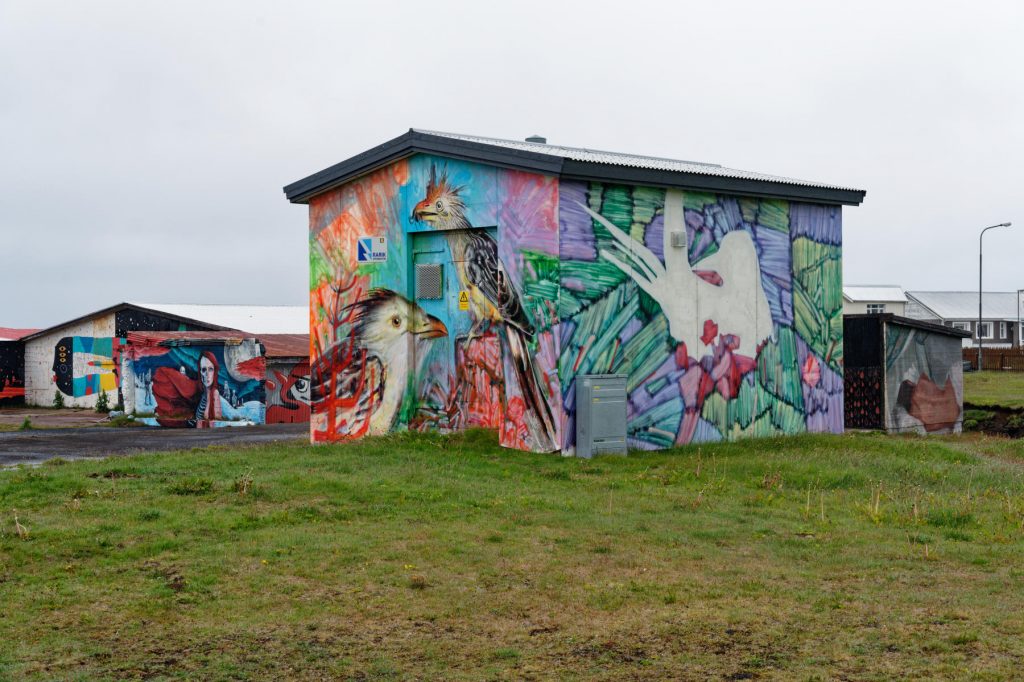 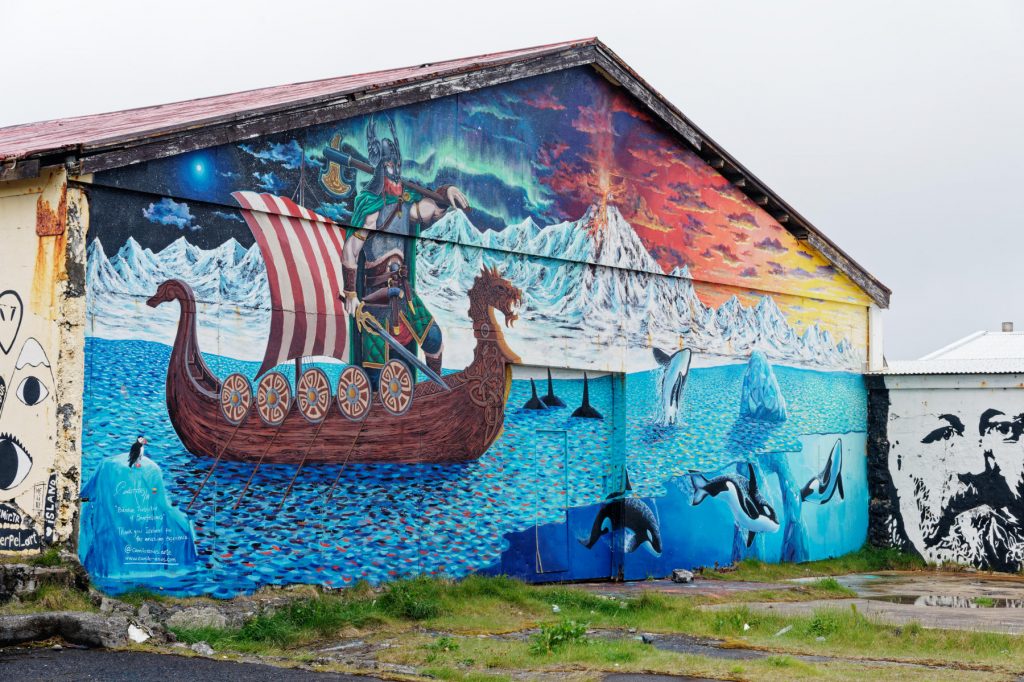 We carried on around the peninsula and, very gradually, the fog started to lift and the sun to peep through.  Eventually, we could even see the glacier which the fog had hidden so completely that morning.  We thought that Dagur had driven past the point where we could actually see the glacier, but he turned off and took us past the official viewpoint car park and along a very bumpy track 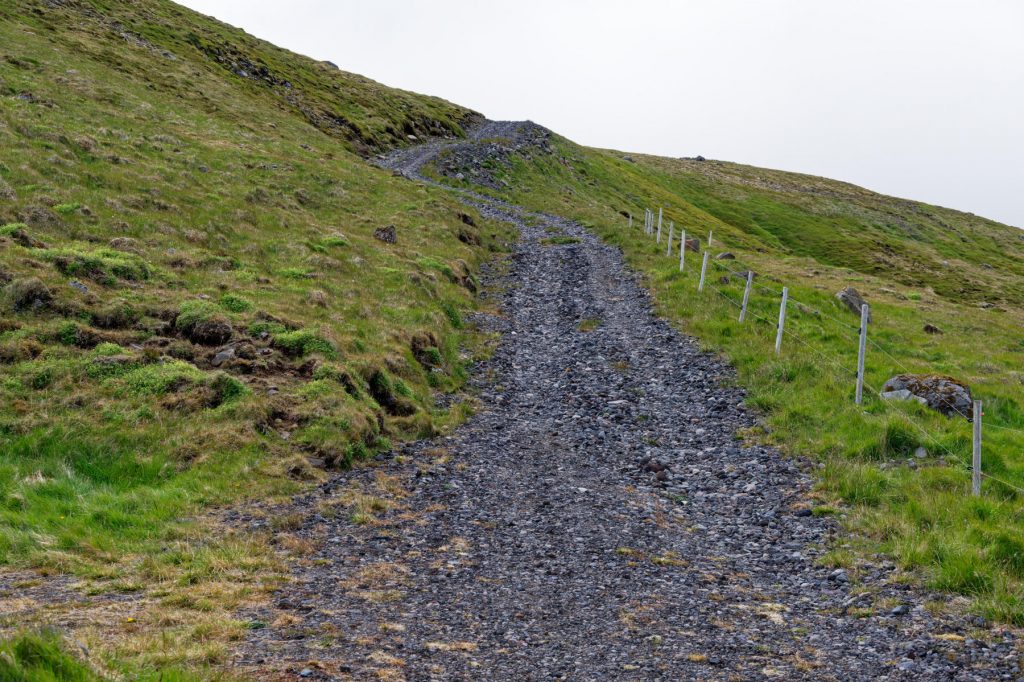 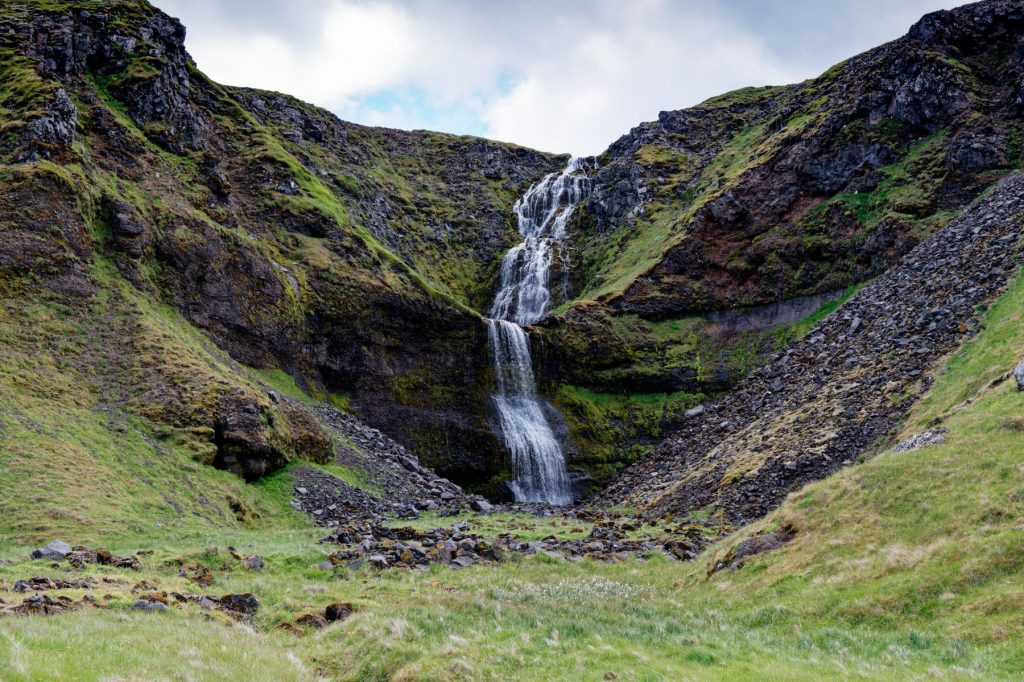 and eventually, there we were, with a prime view of the Snæfellsjökull glacier! 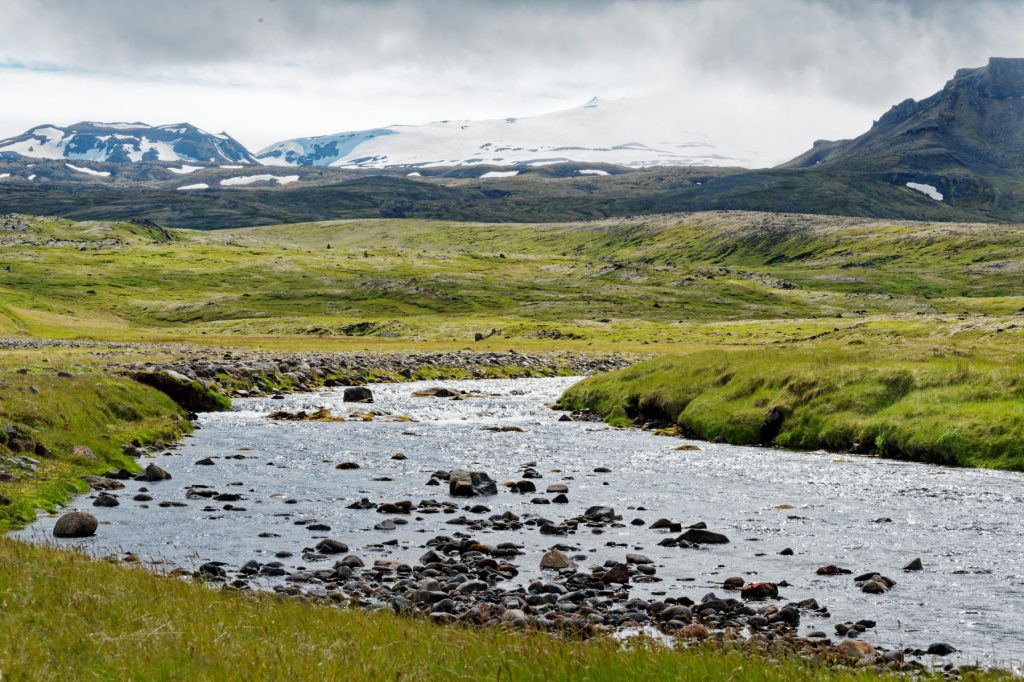 As you can see, the sun was beginning to shine.  It was still very windy and there were still occasional bursts of horizontal drizzle, but fundamentally the weather had changed for the better.  It even enabled some shots of a church near Hellisandur, which in itself was quite photogenic, but it also gave a further opportunity to show the ubiquity of the lupins. 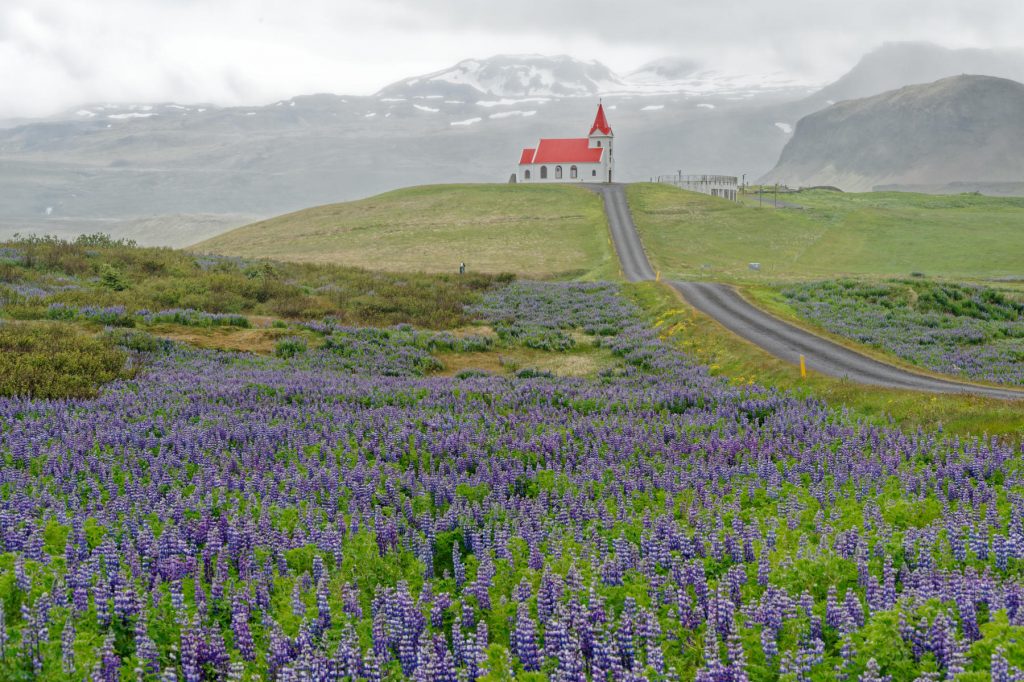 We had two final stops before a ferry journey towards our hotel for the night.  We struck really lucky for the first one.  The local mountain, Kirkufell, had been shrouded in fog, but this lifted, the sun came out and so it was a really worthwhile stop to capture a classic photo of it. (Apparently, single mountains are rare in Iceland, so this is a fairly unique sight.) 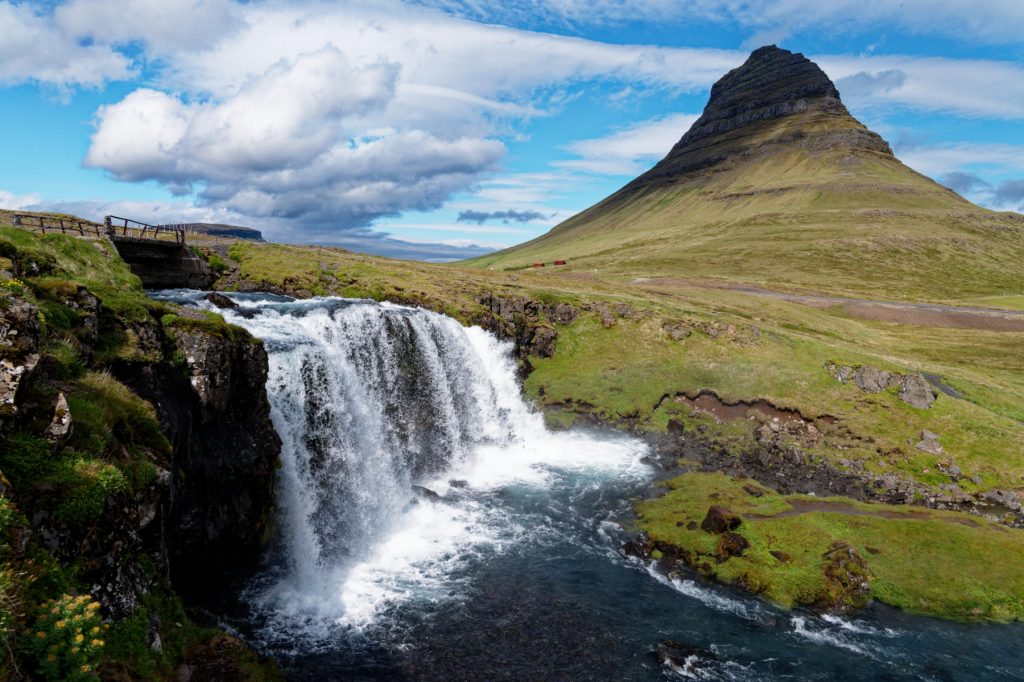 The waterfall is called Kirkjufellsfoss, and although this is a picture taken a million times by a million photographers I was very glad to get such a clear shot in such good conditions.

The final photo was taken in some haste as we made our way to the ferry at Stykkishólm.  Although the town has a perfectly normal small church, for some reason “an architect fuelled by cocaine”, in Dagur’s words has somehow got permission to build Stykkishólmskirkja, which was, erm, dramatic. 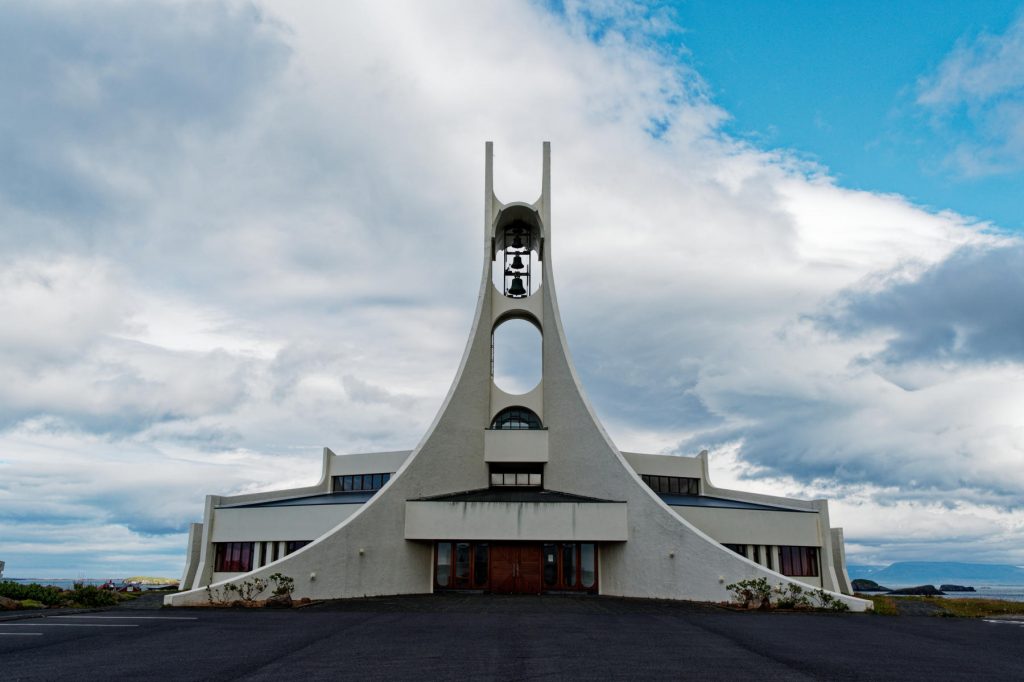 Unsurprisingly, opinion is deeply divided about whether this is a good addition to the town or not.  I quite like its arresting style, personally.

After this, we simply made our way to the ferry, a two-and-a-half hour journey to Brjánslækur, itself just a short drive from the hotel in which I sit writing this, the Hótel Flókalundur.

We had a swift drink and then a simple (but delicious) dinner in a dining room which to start with was full of an Icelandic care home coach outing, including one old guy who was wandering around being extremely genial because extremely drunk and taking swigs from a bottle of neat spirits of some kind.  He was eventually bundled into the coach and quietness returned to the dining room whilst we finished our meal.

If you’ve stayed with this post thus far, then well done!  We covered a lot of miles and sights today.  Tomorrow promises to be the same; I have no idea what the weather will be, but I’m sure Dagur will dig out the best sights for us to take in and pictures of.  So please come back tomorrow, when I hope I’ll have more photos to share with you.