Monday 7 March 2022 – While the hotel we’re staying at is a very nice environment, I think we might need to Have A Word Or Two about some of the catering.  The restaurant on the day we arrived was a little patchy in its service and food prep, and the breakfast today was not properly organised; the lady in charge was too busy behind the scenes to notice that items on the buffet needed refreshing until someone pointed it out. We might give the restaurant another chance; after all, it was only its first or second day after reopening. But it’s a shame that such a lovely environment lacks a bit of care and attention in places.

Never mind – we managed to construct a reasonable breakfast and then headed out for the day’s travels.  The weather forecast promised that early cloud over the mountains would dissipate and so we headed out with the idea of making the central peak, Pico de las Nieves, the central part of the day, then head over to the west before wending our way back home round the north of the island.  Because of its geography, or possibly geology, or indeed maybe both, the best way to cover any significant distance on Gran Canaria is to drive round the major road which rings the island to the point nearest your intended destination and then head inland.

Let’s do a worked example.  Our first port of call today was a town called Teror. Our last, before we hightailed it back to the hotel was a village called Agaete.  To do that as efficiently as possible, Google maps suggests this:

On the other hand, you could go over the middle of the island, and this is the route we took.

According to the god of online maps, that route is 85 km, and would take 2 hours and 12 minutes, which equates to 39kph. And that, reader, would be going some; the Sunflower book of Gran Canaria walks and tours suggests a planning assumption of 15-20 kph on the mountain roads.  It would take fierce concentration and sphincters of steel to average 39kph.

Anyway, we took all day.  It was still buttock-clenchingly tense at times, but we escaped without any accidents and with several photos, to see some of which please read on.

We started in Teror, because it held the promise of some handsome buildings with an interesting variety of balconies.  And it delivered on these promises, erm, handsomely.

Here, for example, is the Calle Real de la Plaza. 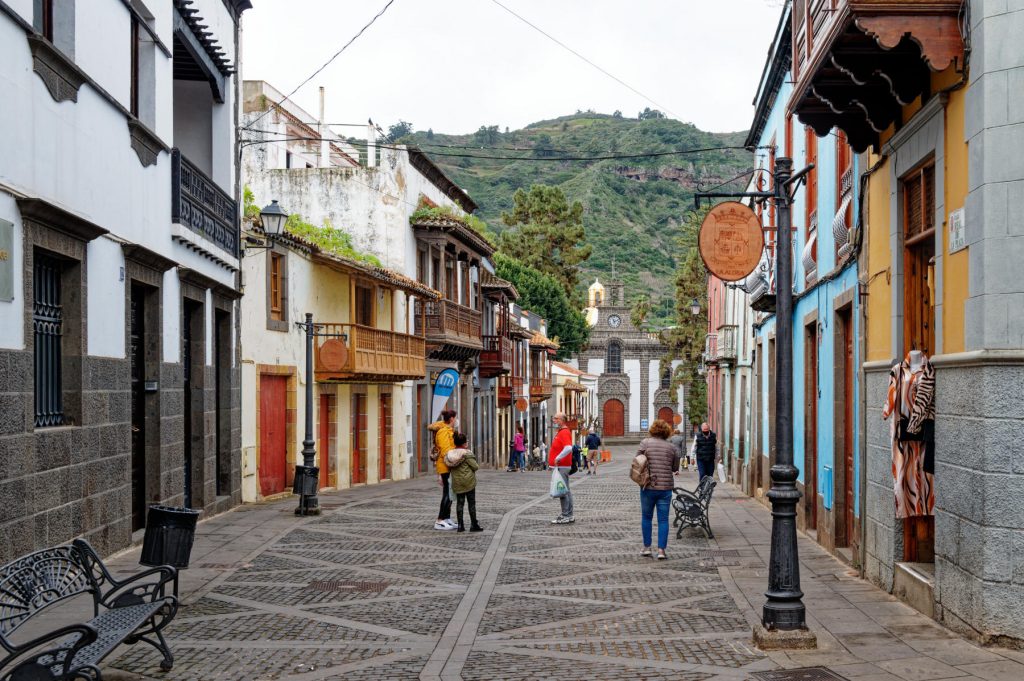 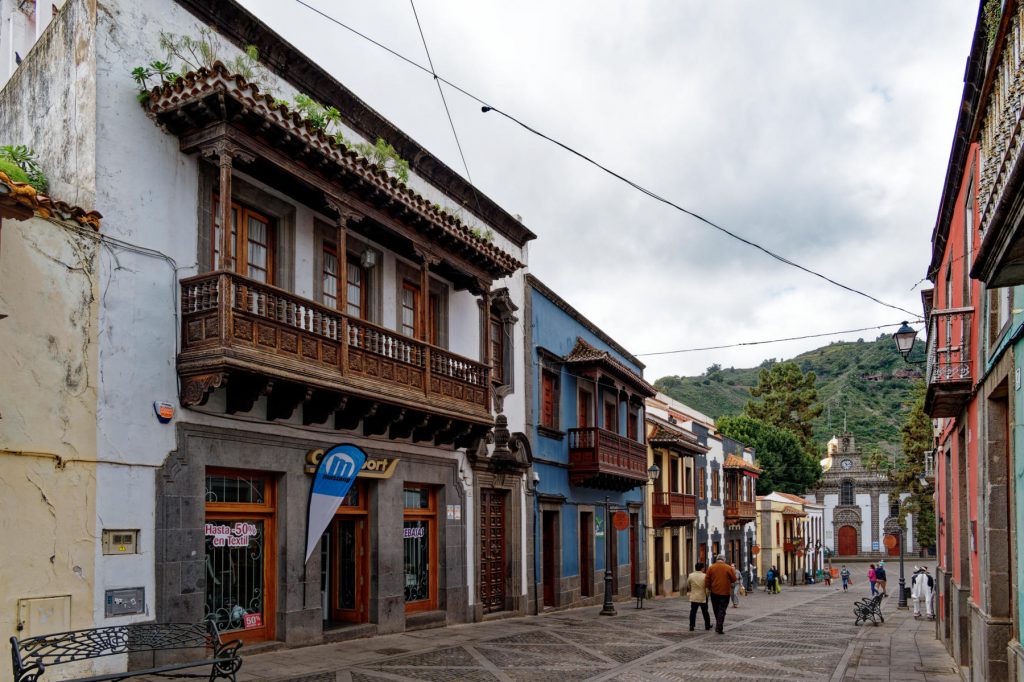 As well as some lovely balconies, it has some interesting buildings, such as this one, which is covered in tiles. 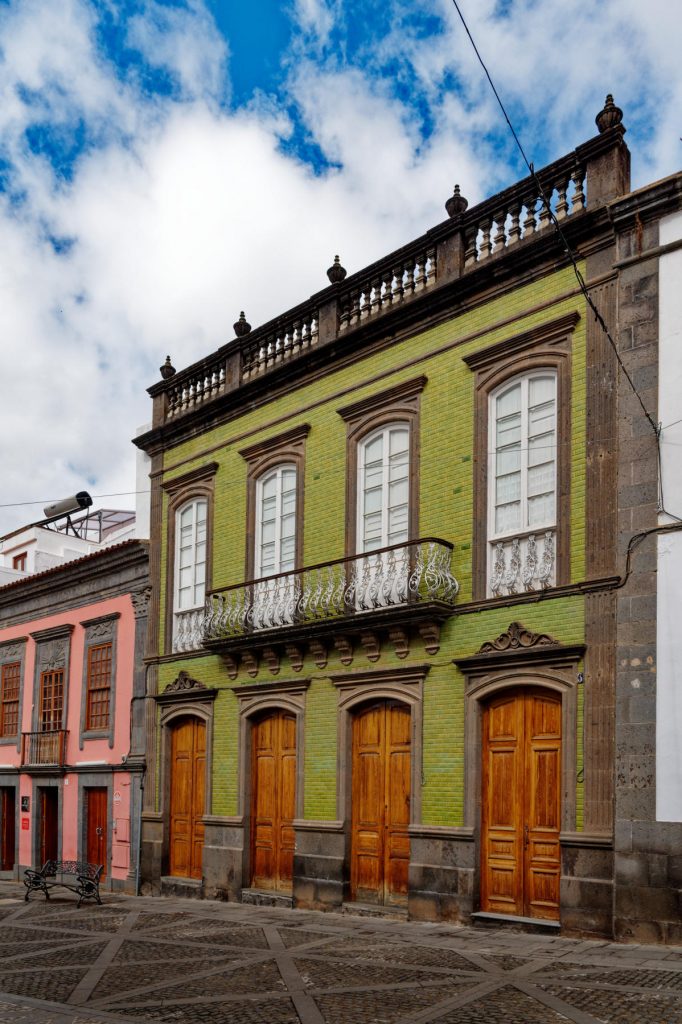 The church is an imposing building 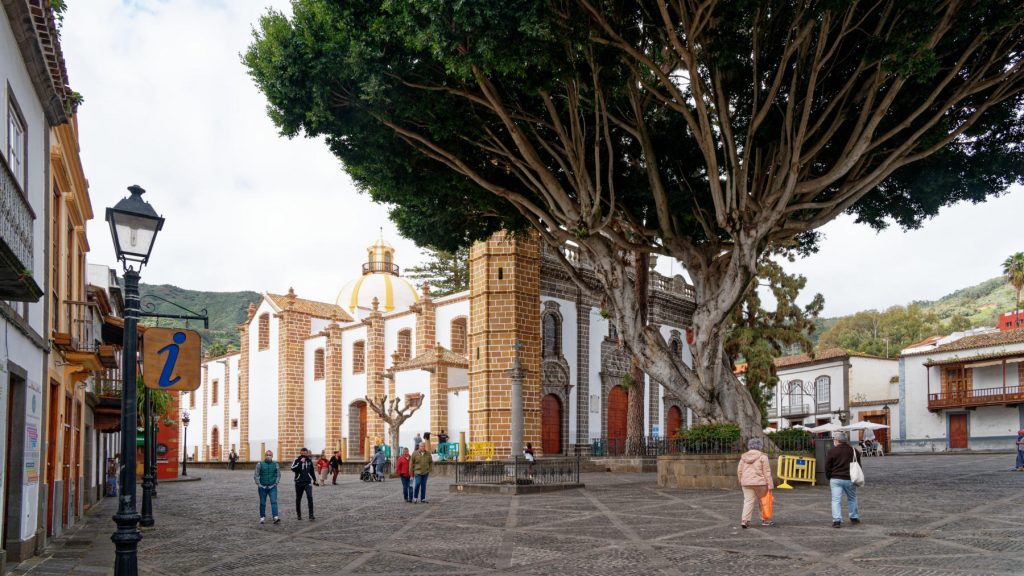 (sadly closed on Monday mornings for cleaning) and there are plenty of other interesting sights. 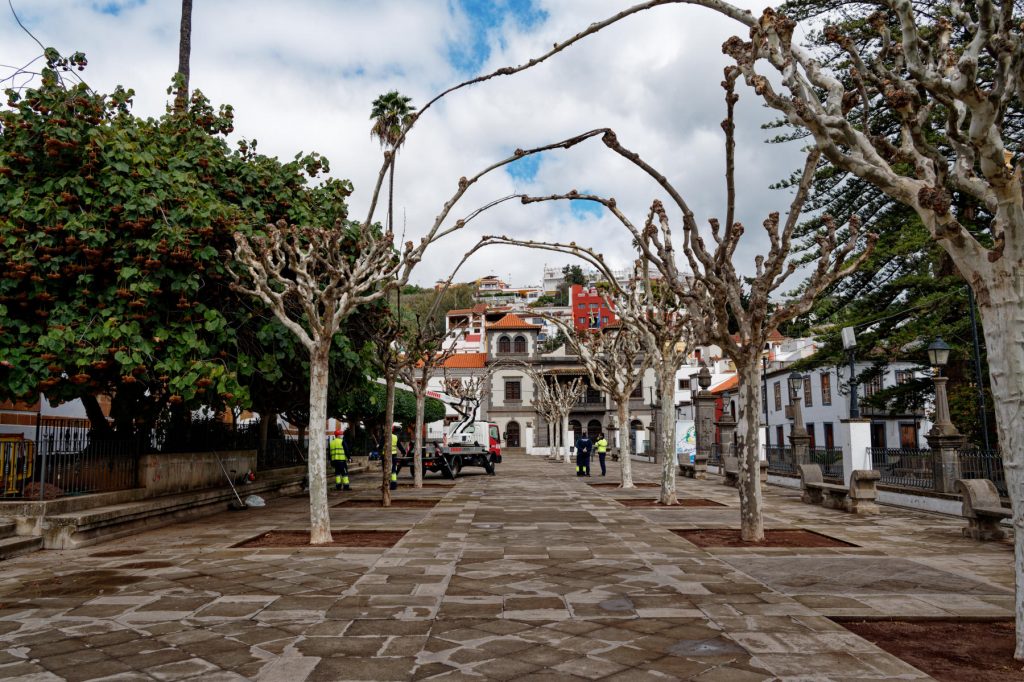 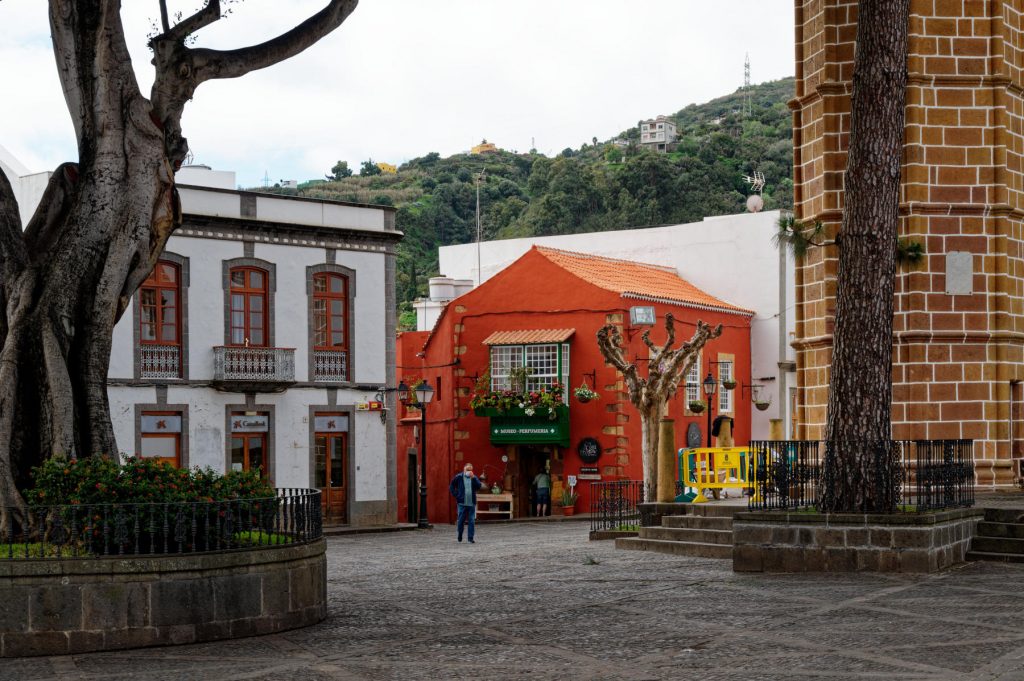 Among all this interestingness we noticed one thing which seemed a bit unusual; everyone was wearing masks all the time, even outdoors.  It didn’t seem compulsory. We started walking around maskless and no-one, not even a chap dressed in official-looking uniform, asked us to mask up or motioned that we should.  But the discomfort we felt at being the only unmasked individuals was greater than that of wearing a mask, so we completed our walking around wearing masks.

Jane had read about a particular thing, a water feature, she wanted us to see, so we trailed about looking for it, and…. 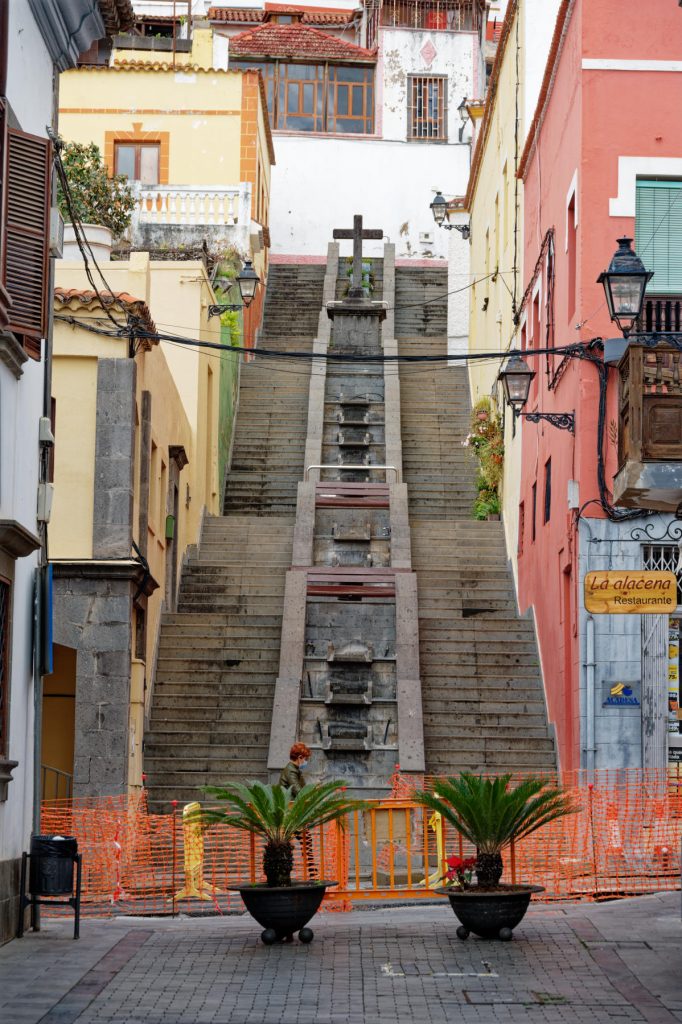 it wasn’t running. We consoled ourselves with a coffee and then headed back to the car, past the very imposing town hall 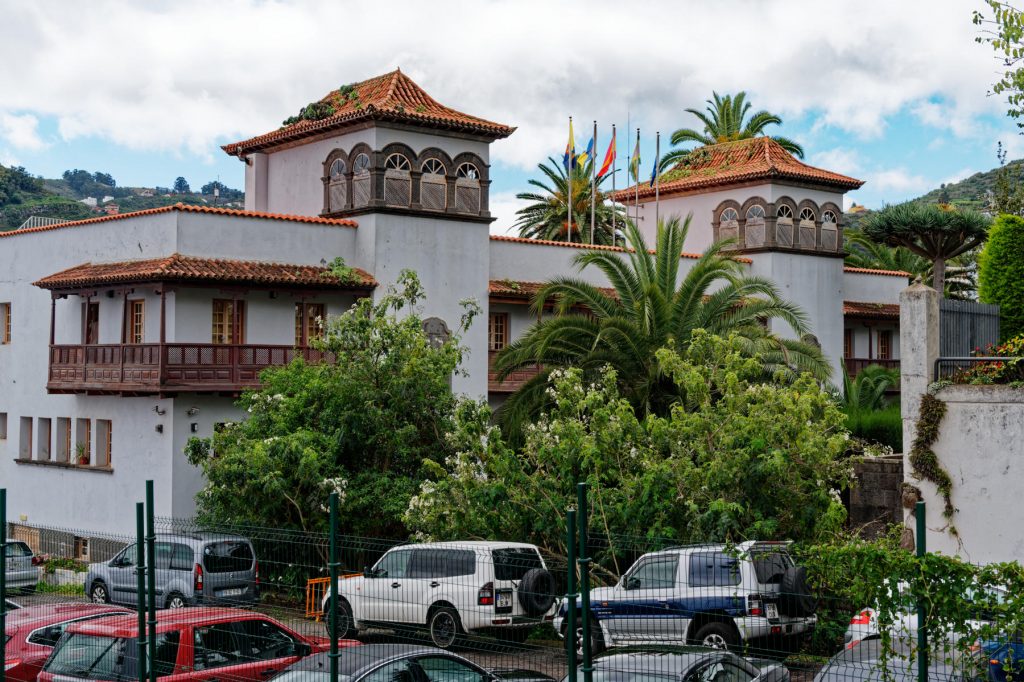 before heading out.  It wasn’t long before we came to the first viewpoint of the day, the Mirador de la Vuelta de los Pájaros 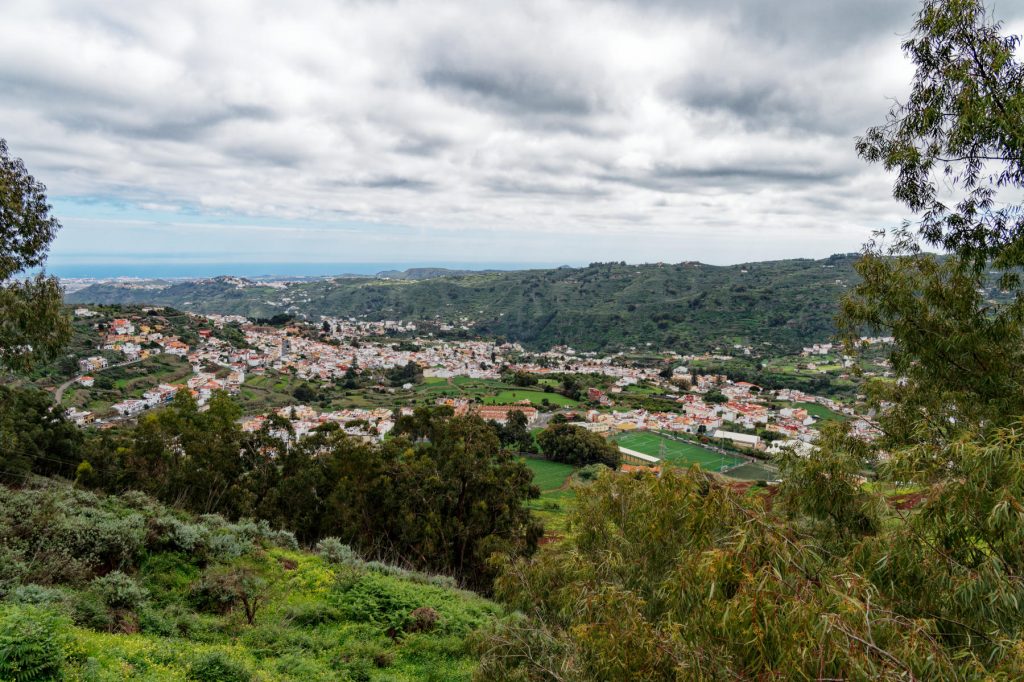 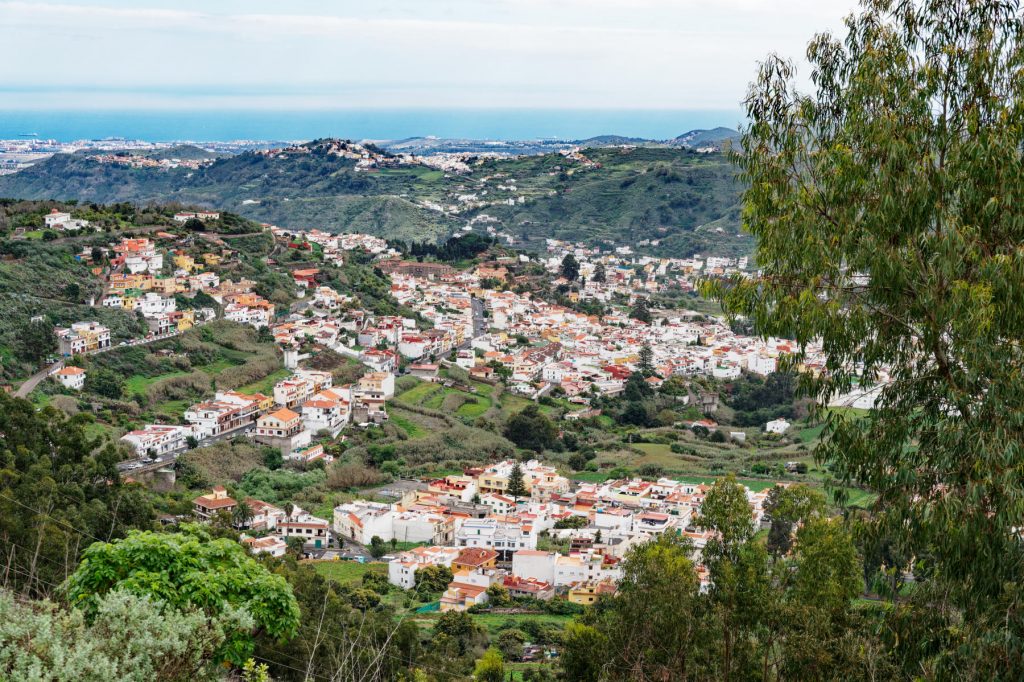 after which we carried on further up into the hills.  The original plan had been to head to the highest point on the island, but that depended on the clouds clearing, which it began to look like a distant prospect. 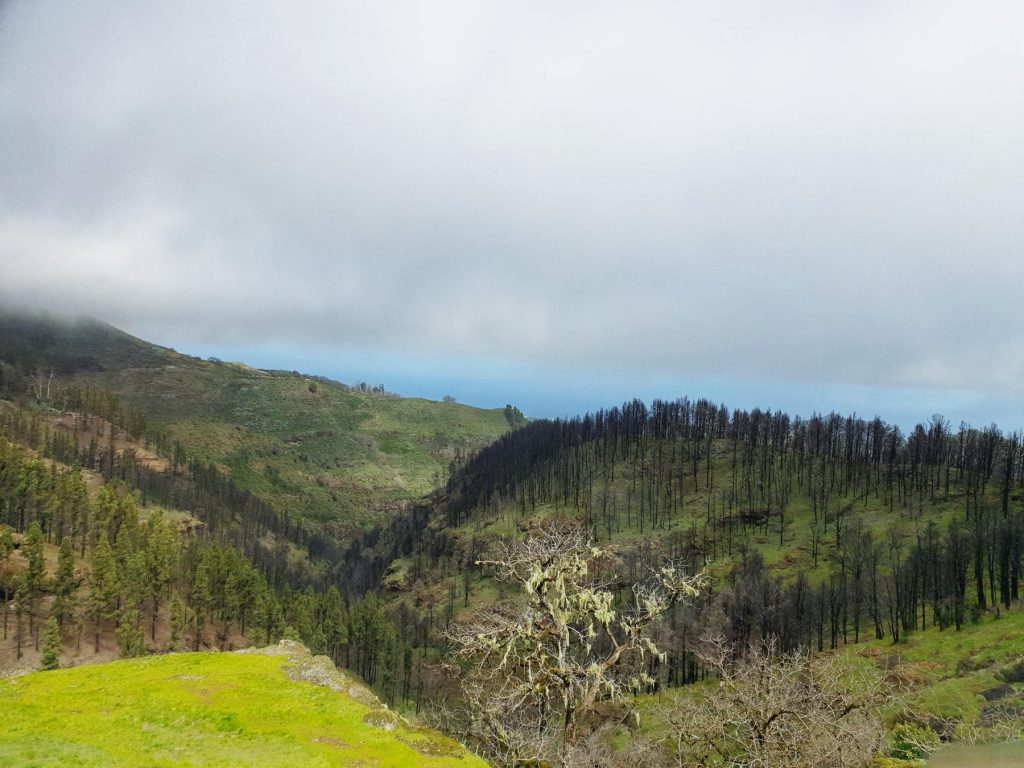 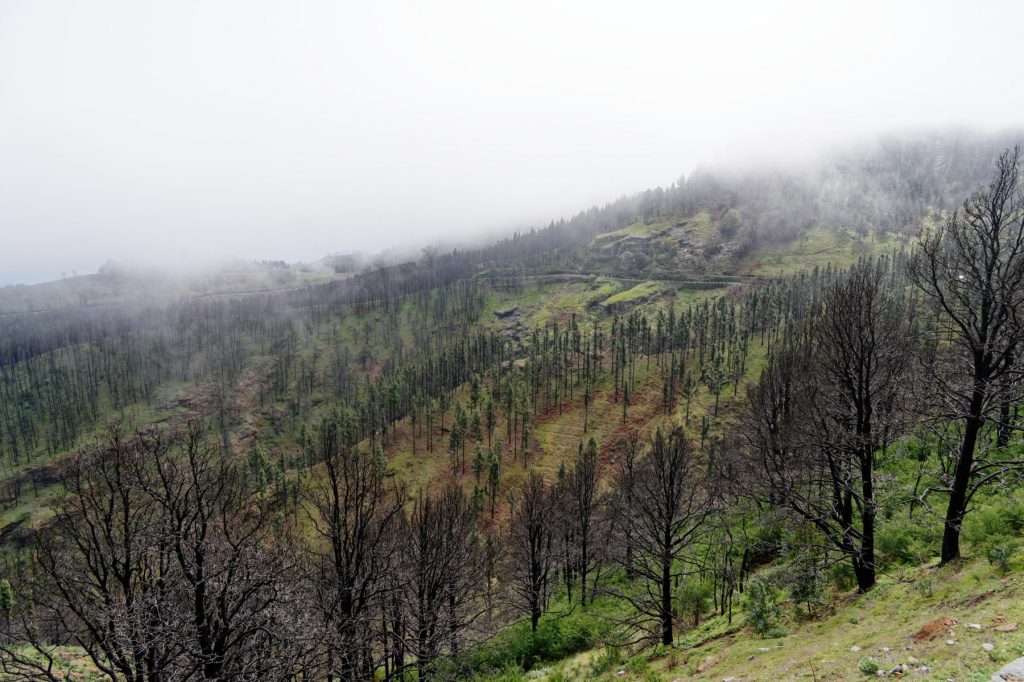 The Canary Pines in the photos above had been the site of pretty significant fires in 2017 and 2019, and you can see the demarcation between the areas affected and not. We read that the pines are pretty resistant and should survive.

A little further on, another “astronomica” viewpoint on the way persuaded us that perhaps heading any higher would be optimistic 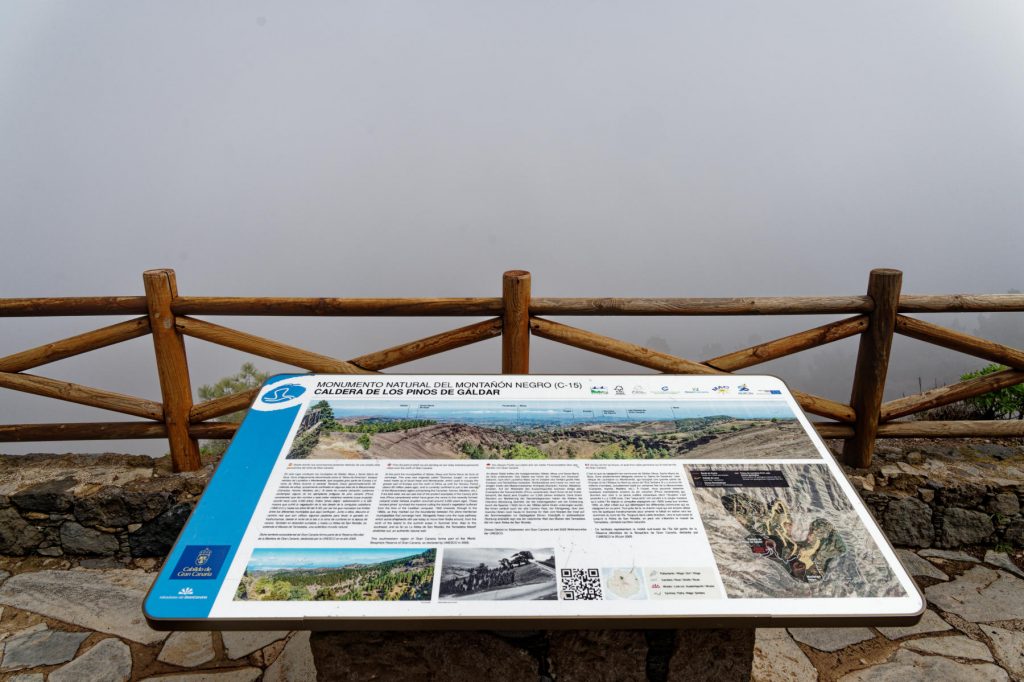 and so we rather headed down; soon after the above scene, we saw this

which is pretty much the view we would have had from the formal viewpoint, but you can see where the cloud starts.

Having decided to avoid going higher, we headed off across the island, with the distant destination of La Aldea in mind.  En route we passed some attractive scenes. 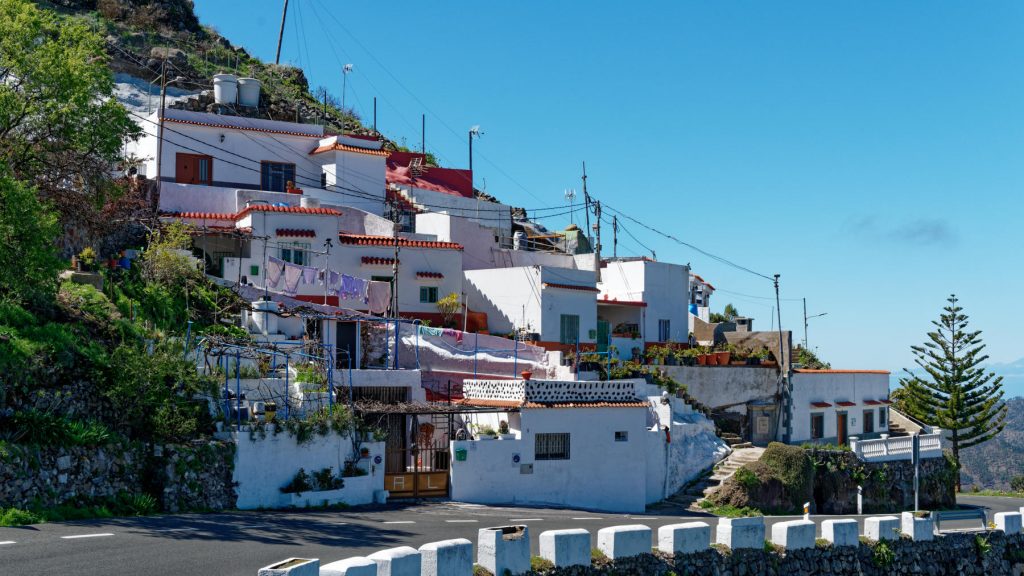 Above is Candelaria, which is very attractive but utterly remote. We wondered how the people who lived there managed for schools, shops, doctors and such. 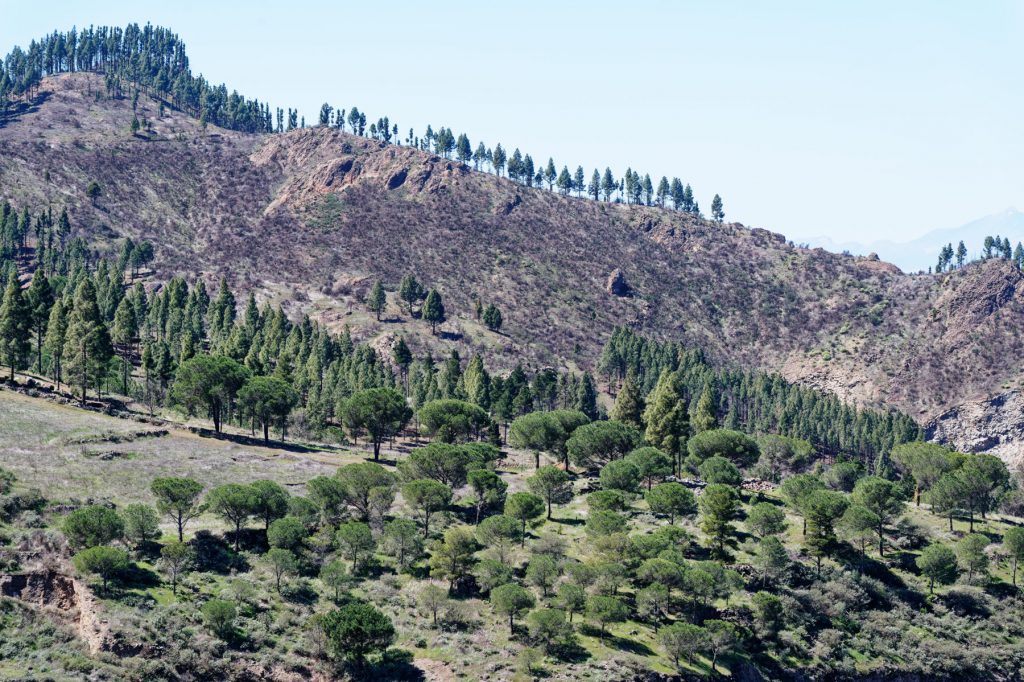 I took this picture at a mirador called la Atalaya.  Overall, the views were not that  fabulous, but I liked what looked like a fringe of single trees on the horizon, like injuns about to spring an ambush (can one say that sort of thing these days?). 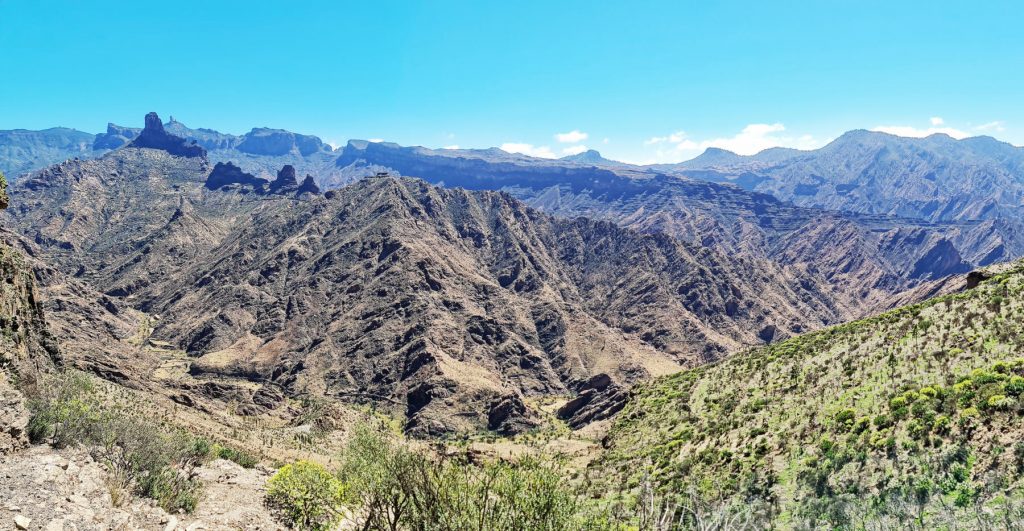 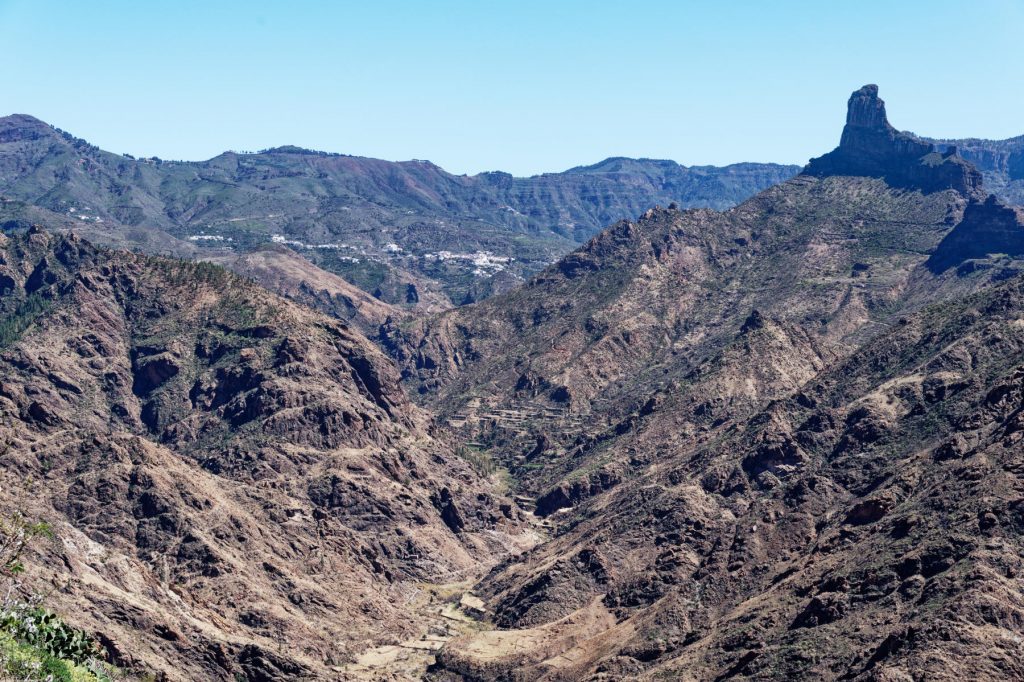 We passed a viewpoint called the Mirador del Molino, mainly because it had the remains of a mill there. 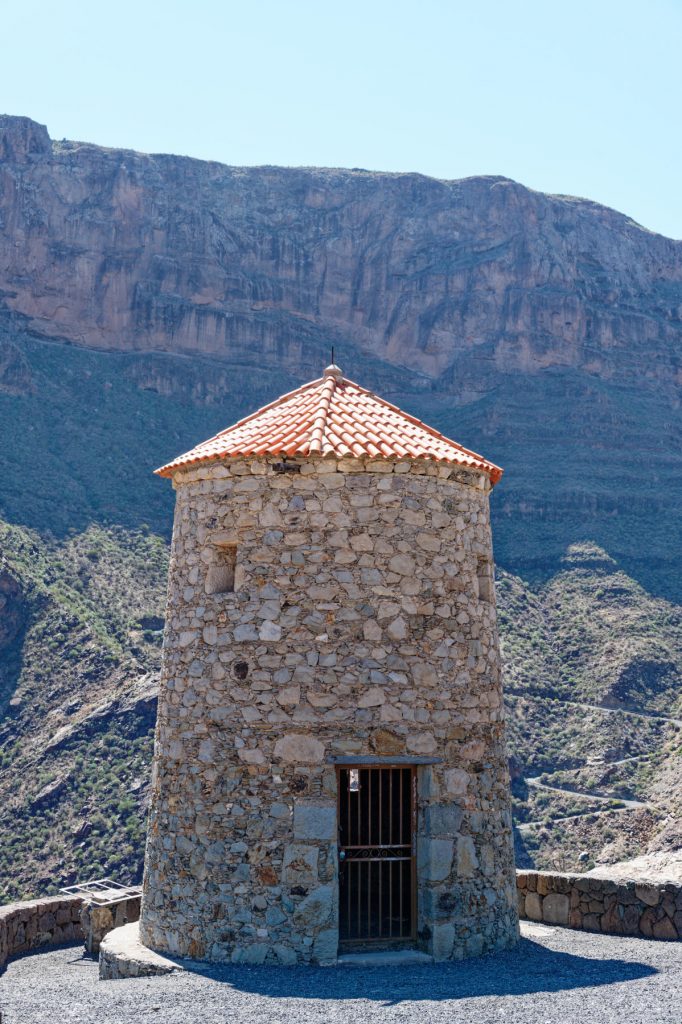 More to the point, it had rather a spectacular view over a lake called Presa del Parralillo. 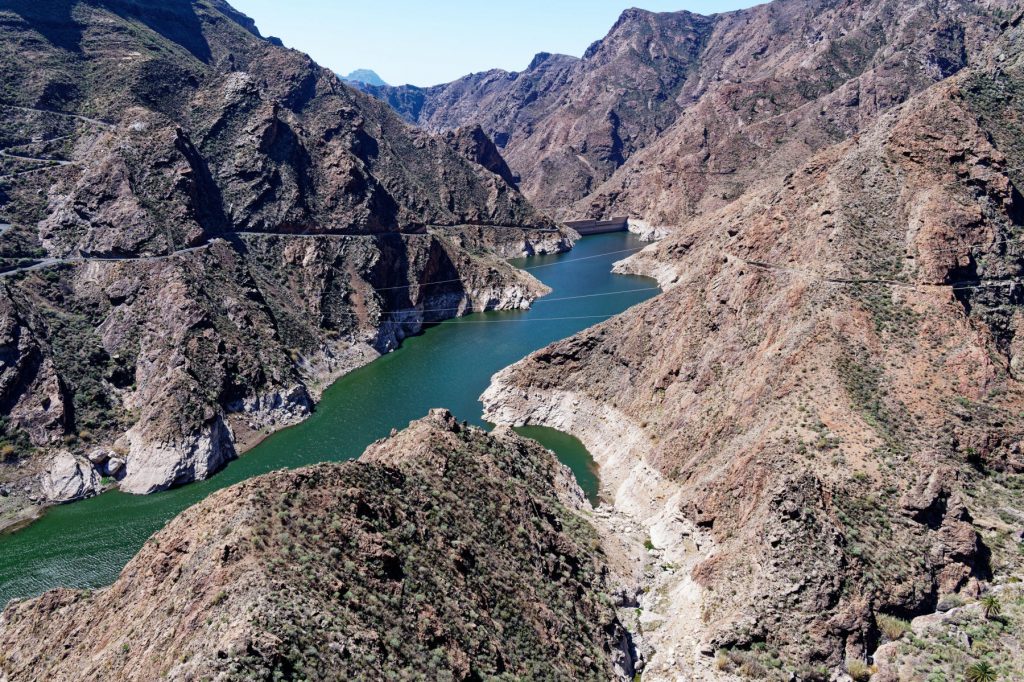 If you look at the left side of the photo, you can see the road running downhill towards the dam at the end of the lake.  When you get down there, you can look back and just about make out the mill. 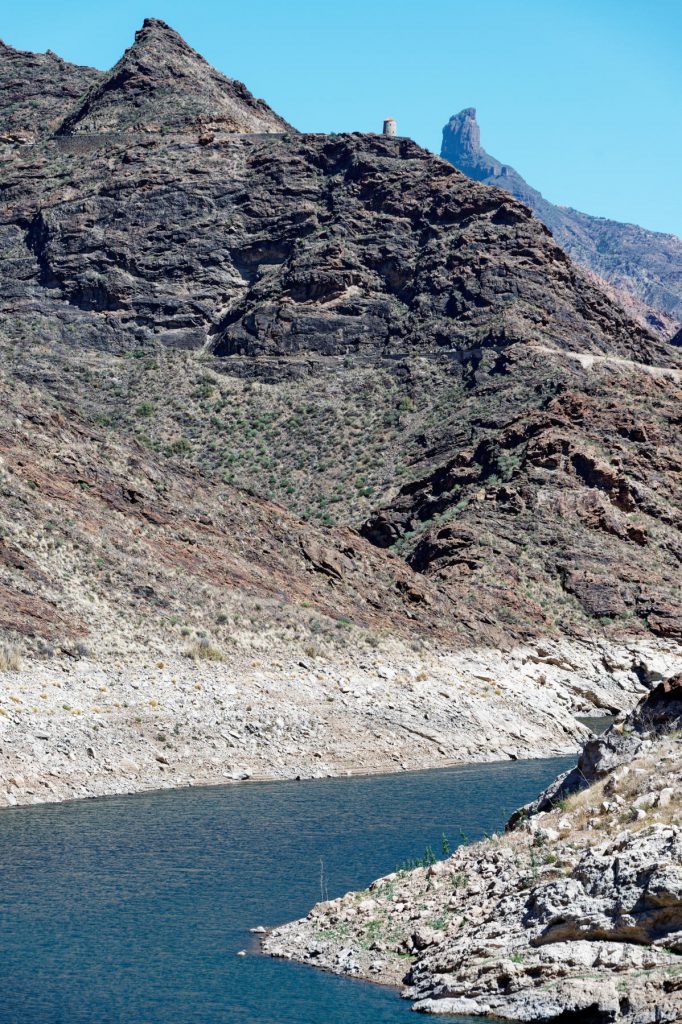 The road led past the dam 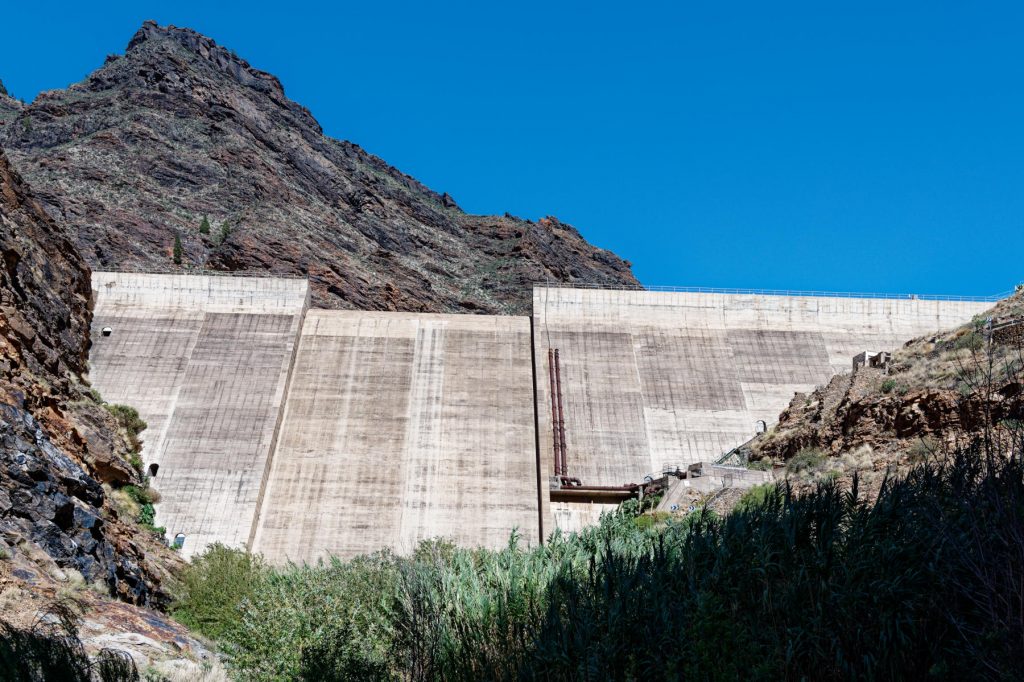 at which point, some 25km into this precipitous, narrow and winding road, The Powers That Be put up the most spectacularly uncounterintuitive sign. 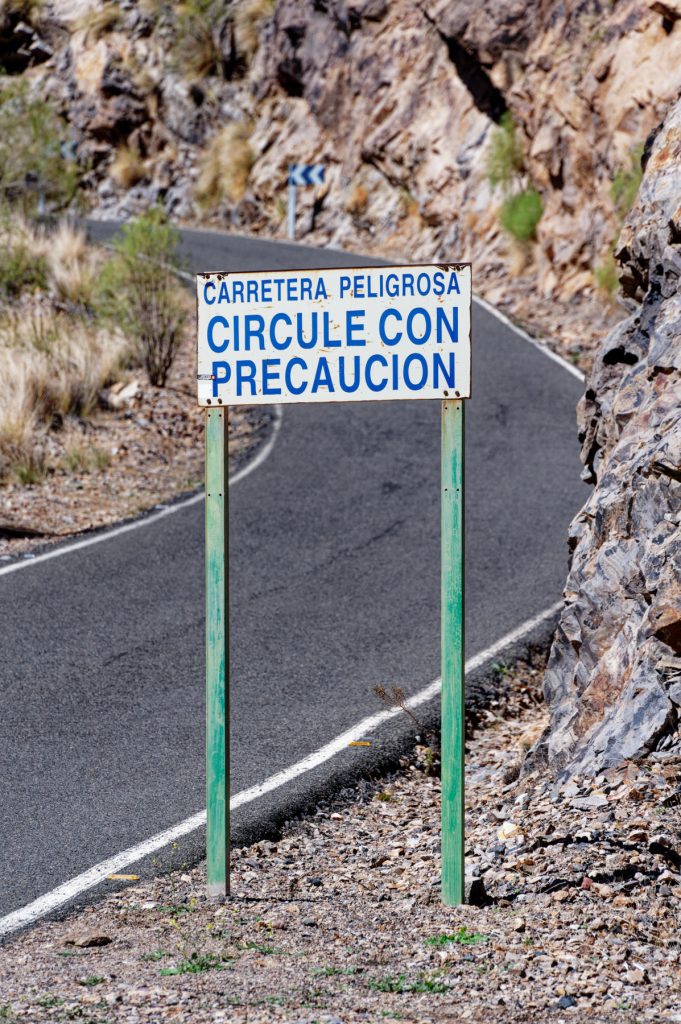 Mind you, they might have been referring to the cyclists, who were alternately toiling up and whizzing down the road in completely lunatic fashion.

We stopped for a late lunch in La Aldea and I tried my hand at yet another arty photo of the scene just by the café. 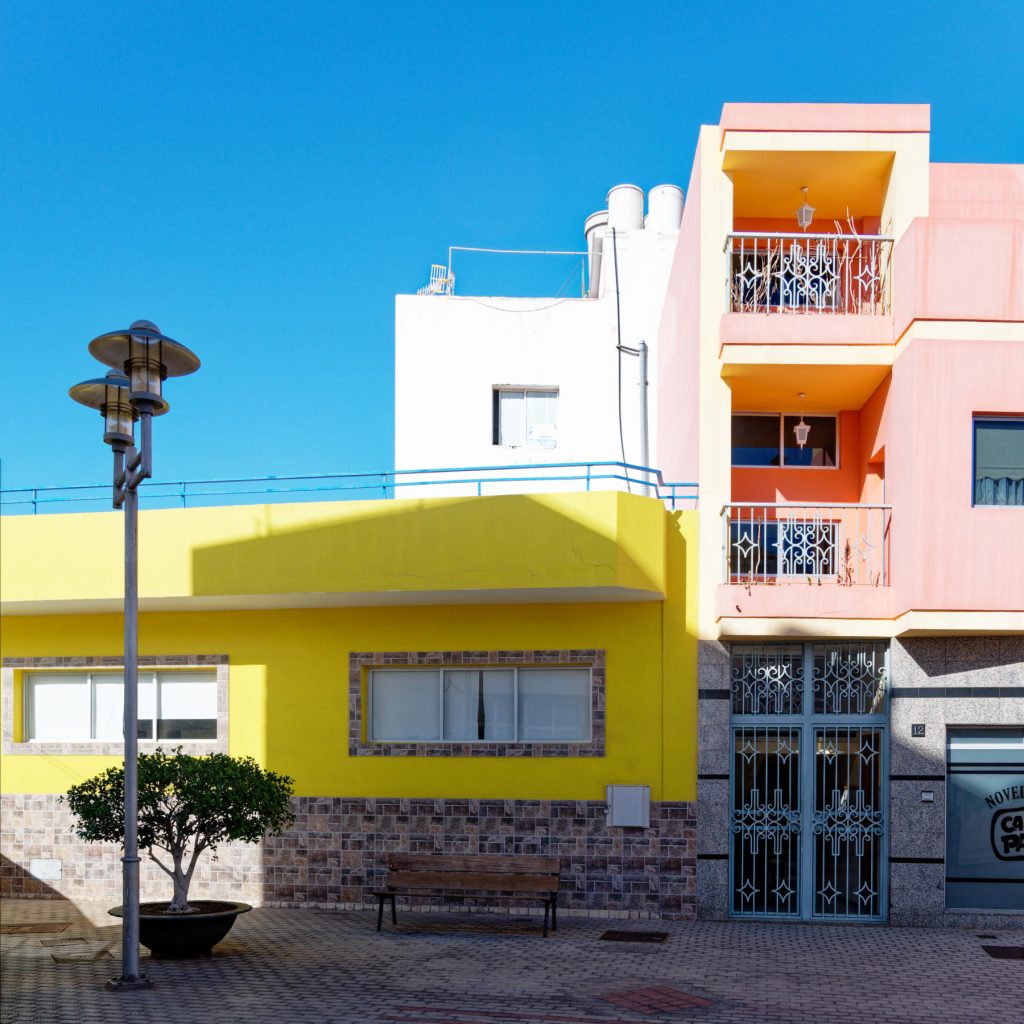 Then we carried on towards the end of the mountainous part of today’s excursion.  Not, it has to be said, without some more buttock-clenching moments. 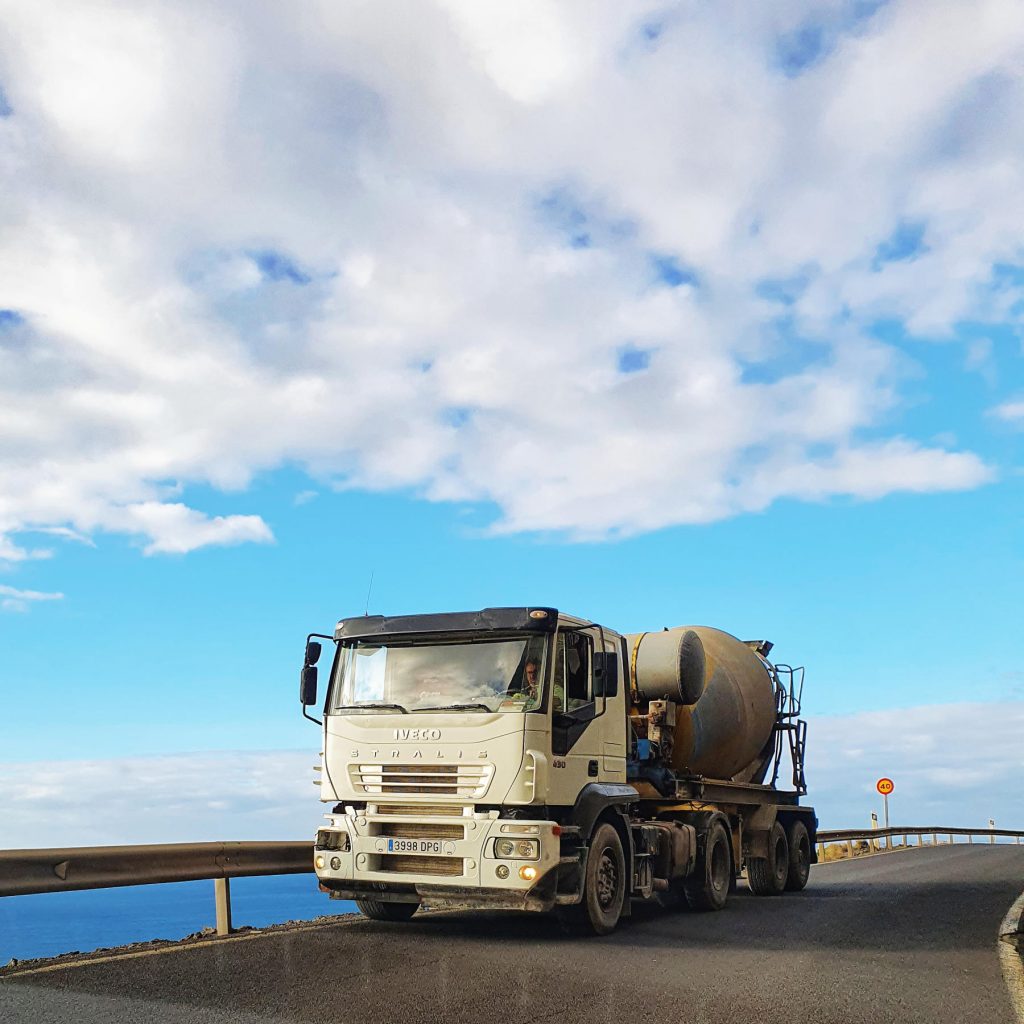 This lorry was one of what seemed like an endless stream of heavy vehicles headed in the opposite direction.  We think it has to do with creating a tunnel to bypass the twisty bits.  The tunnel is complete in places, and I must say that it’s a lot more relaxing to drive in than the roads it is due to replace.

La Aldea, where we had lunch, is the centre of the fruit and vegetable growing part of the island, and as we took the road out of it, we got a sight which shows the extent of the area given over to growing stuff. 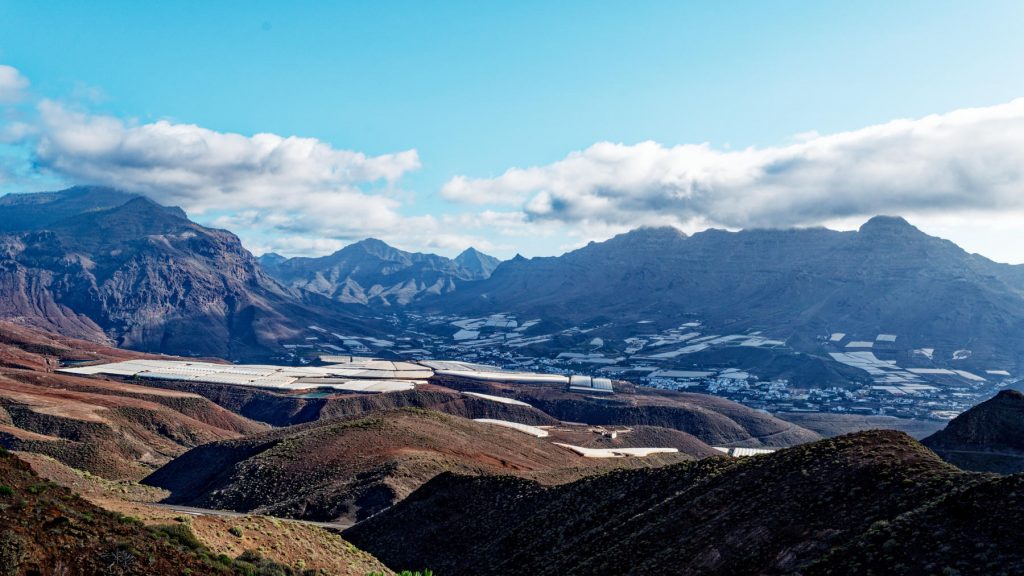 The whole basin of the valley is covered in vast areas of netting to protect the crops – an extraordinary sight.

We rather thankfully headed towards the tunnel, but, before we went into it, diverted to a noted viewpoint, the Mirador del Balcón. Actually the view from it was so disappointing that I didn’t bother to take any photos, but it seems that its main purpose is for people to behave like tourists on it – who gives a crap about the actual view when you can arse about in front of it, eh? 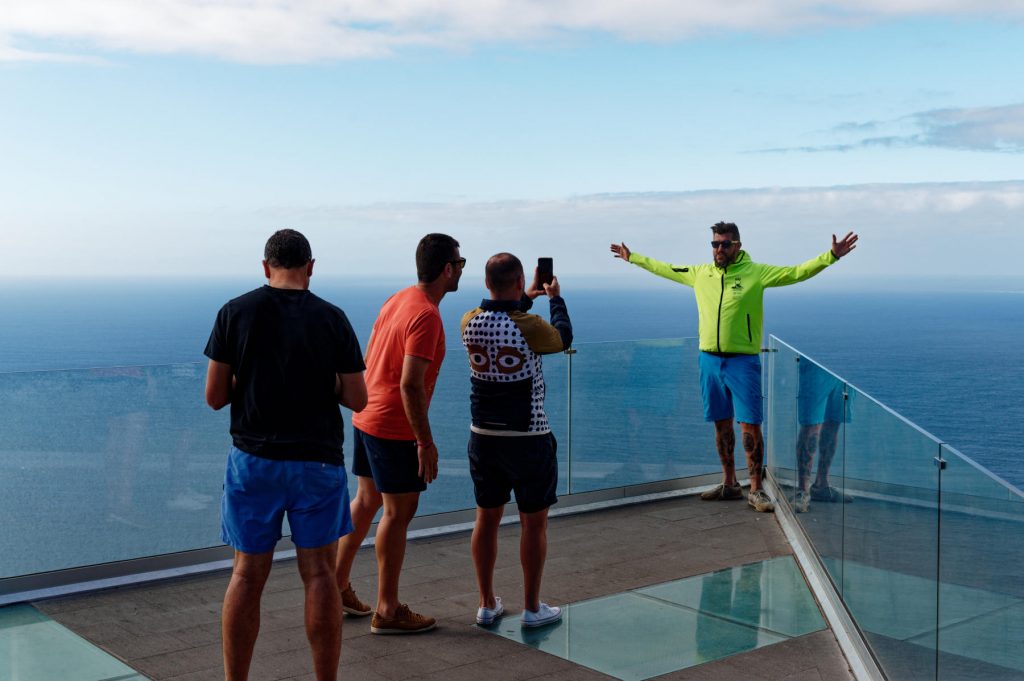 Before we hit the final stretch of the main road home, there were a couple of interesting vignettes: 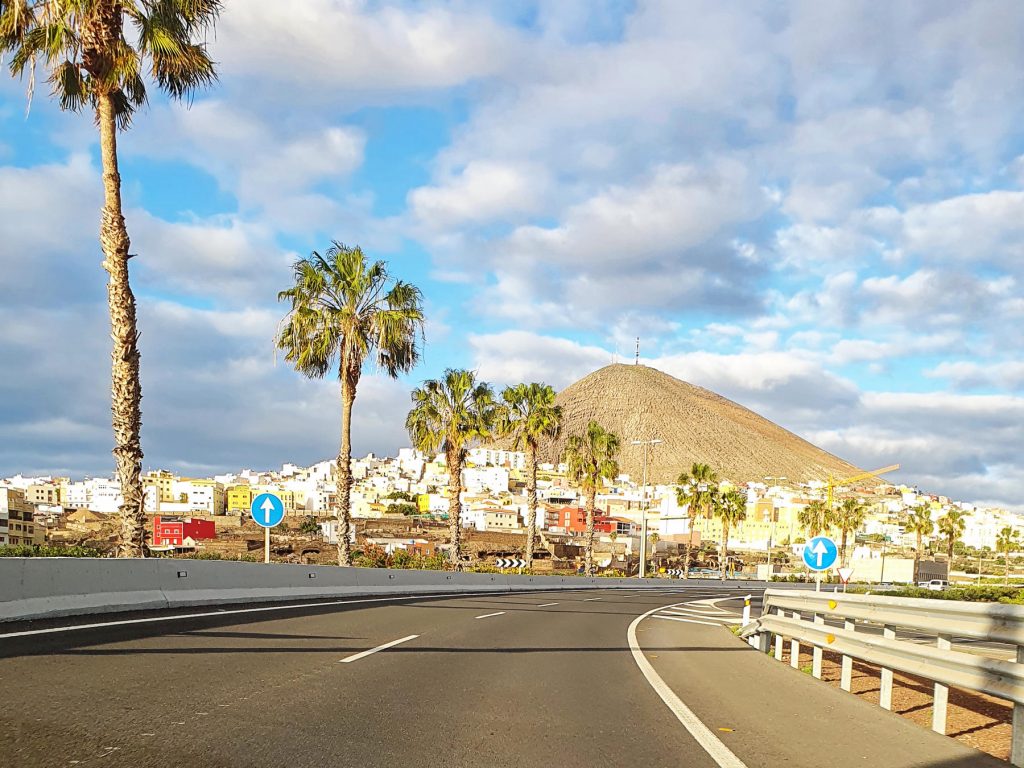 Above, the village of Gáldar, clustered round the base of a volcano; and, below, a couple of shots of parts of the town of Algaete 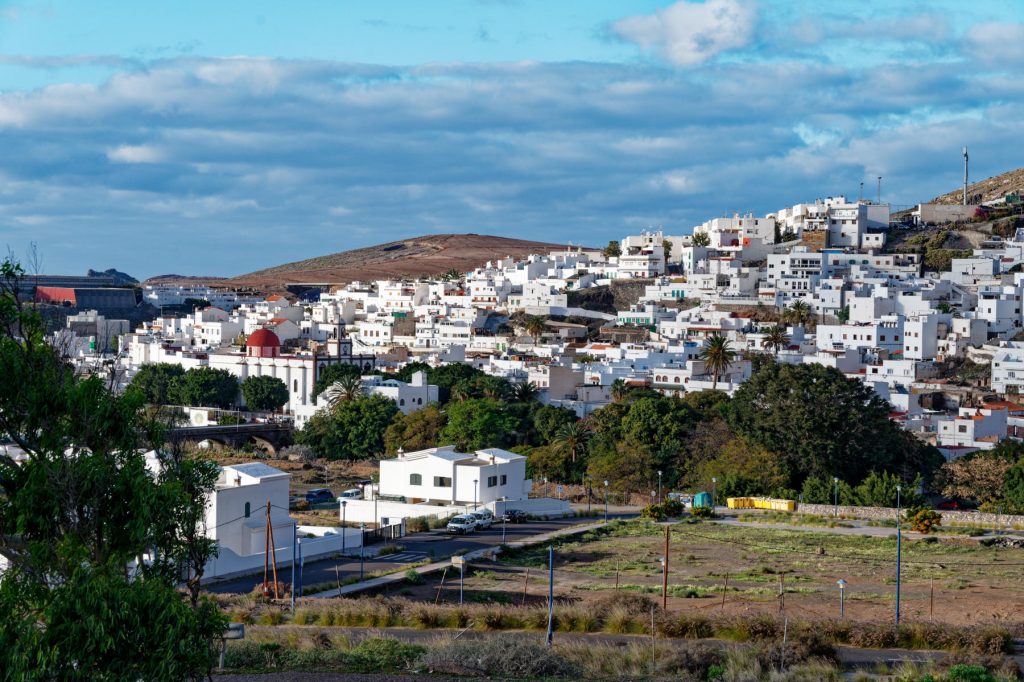 including this slightly strange complex of buildings. 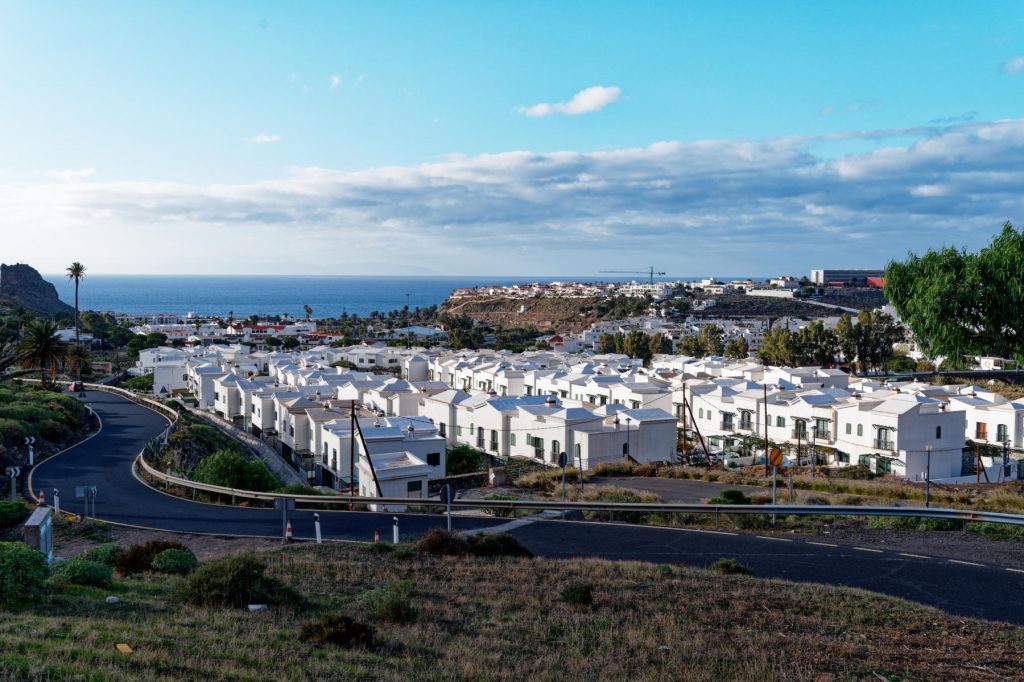 And that completed the day’s touring – some lovely views, big scenery and terrifying roads.

We’ve covered quite a lot of ground over the last three days, but there are still lots of possibilities for new and exciting things to do tomorrow – Gran Canaria certainly offers a varied mix of scenery, history and culture to be explored. We haven’t decided what we’ll aim for tomorrow, so you’ll just have to come back and find out for yourselves what we got up to, won’t you?