Wednesday 22 September 2021 – In my haste to share with you my angst about the weather yesterday, I forgot to mention something terrifically important about the start of the day, which was the breakfast in the hotel. The food on offer was perfectly good, delicious even; but the selection was extremely regimented: one juice or water; one sandwich to be selected from what was on offer; one pastry ditto; one piece of fruit or pot of yogurt; and tea or coffee. We are undecided as to whether this is a Covid precaution, or to stop cheapskate hikers taking enough to make picnic lunches… So, while we were able to construct the life-affirming pot of Earl Grey for the day, a vital piece was missing….

….toast!, for the Marmite I had carefully taken with me! I don’t wish to exaggerate the ghastly nature of this crisis, but, frankly, like the rest of the day, I manfully put up with it without whingeing. Well, not too much, anyway.

Now I’ve got that off my chest, I can continue to regale you with the story of today’s walk.  If you want just to see the route and photos rather than read my chunterings, then they are, as usual, viewable on Relive.

Obvs, we were concerned about the forecast for the day.  I studiously ignored the siren call of the local website which had so traduced me yesterday and referred to the good ol’ Met Office.

The day’s weather looked major peril-free (and so it proved, I’m glad to say) and so we geared ourselves up and started the Stage 11 walk from the hotel. The official end of the stage is at a place called Cap d’Artrutx, but we called it Asterix as a convenient shorthand, because we’re British and we can do what we like with Foreign Names.  The walk was due to be quite short – 13km/8 miles – and with a lot of walking on paved roads and very little discernable ascent in it; our pickup at Asterix was due at 2pm, so we left the hotel at about 0830 knowing that we had plenty of time in hand for refreshment whilst awaiting transport back to the hotel.

Because we were out and about quite early, it was a nice opportunity to capture a couple of photos of Ciutadella whilst it was quiet. 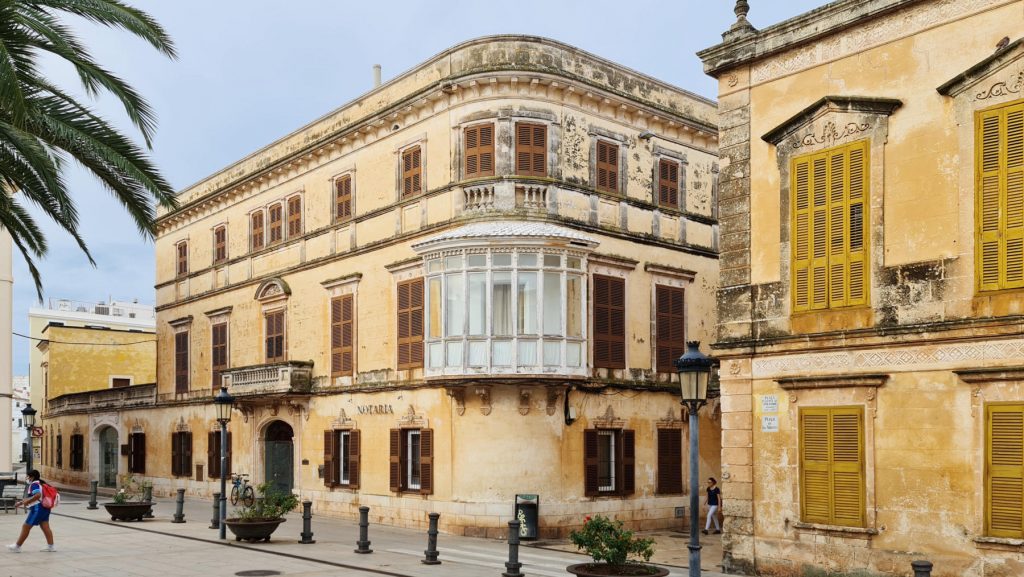 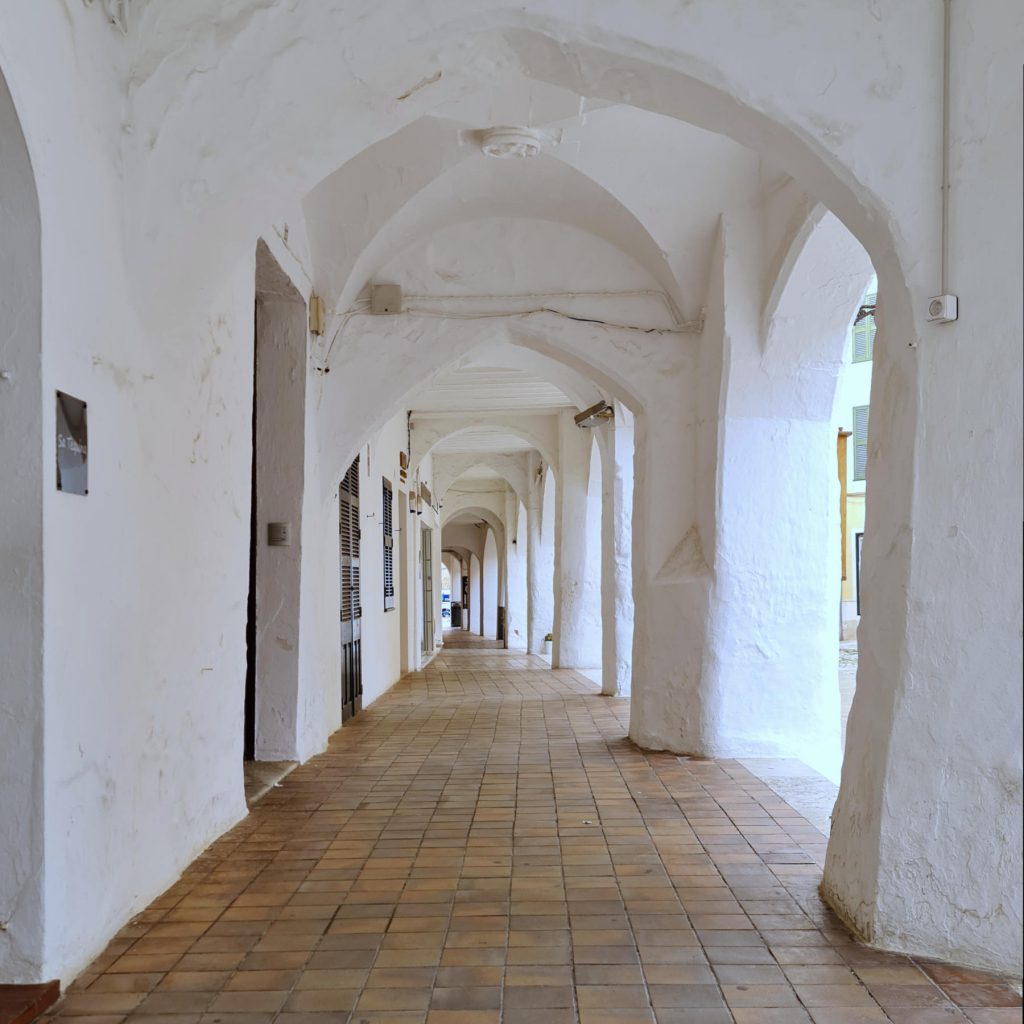 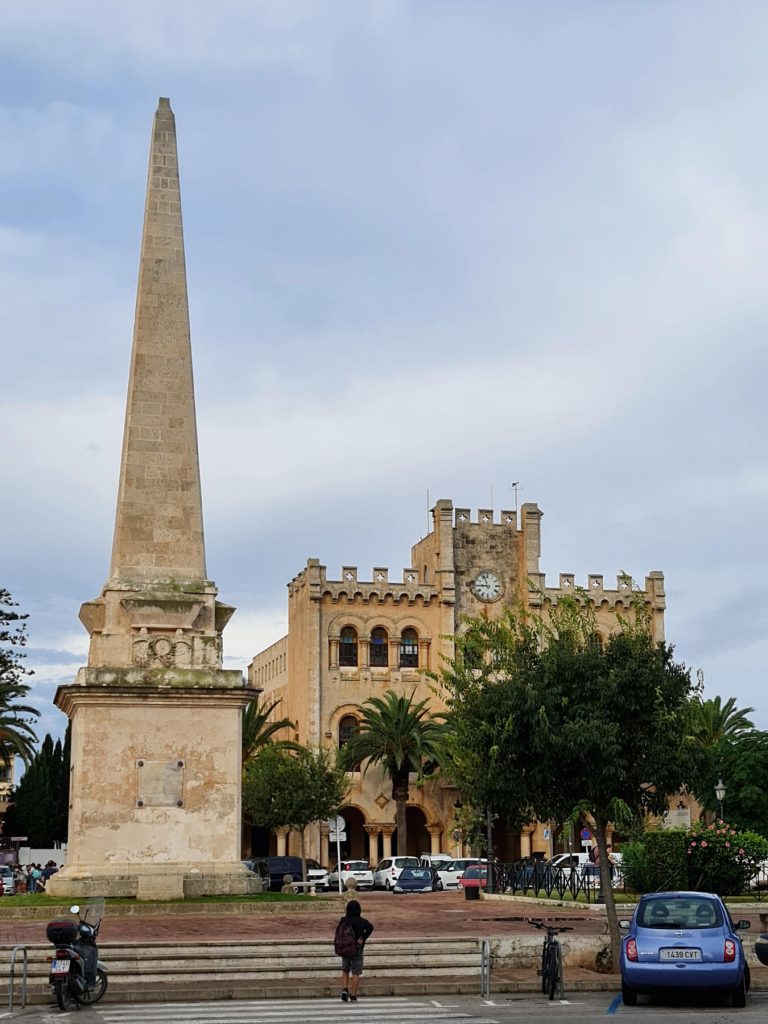 We continued along the Cami track, going out of Ciutadella on the south side of its harbour, past various inlets 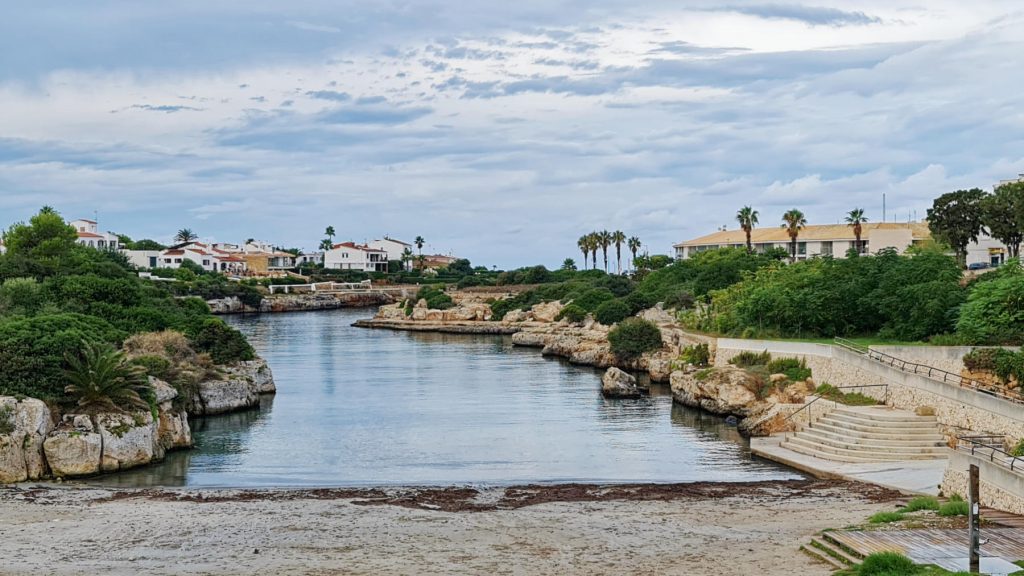 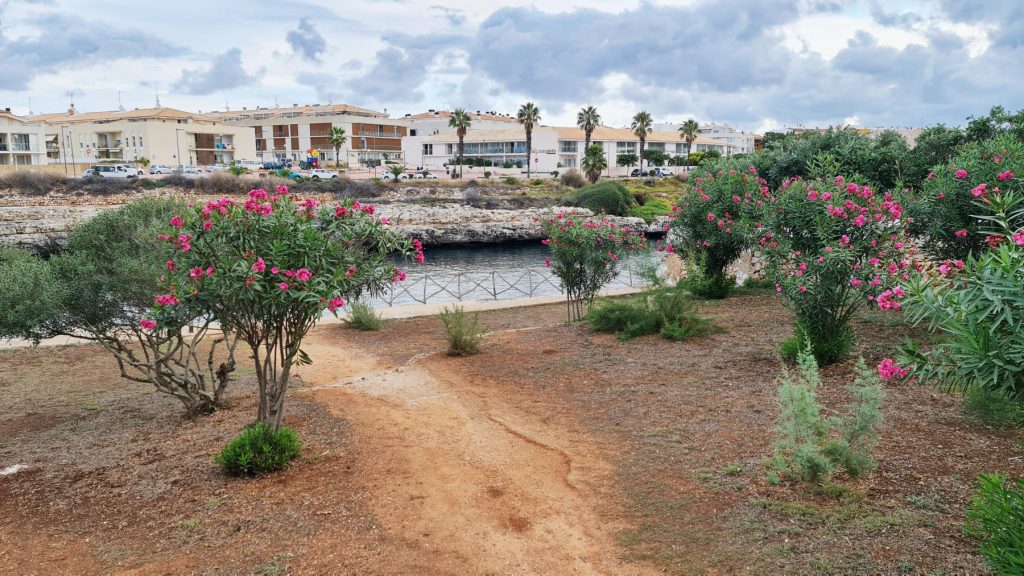 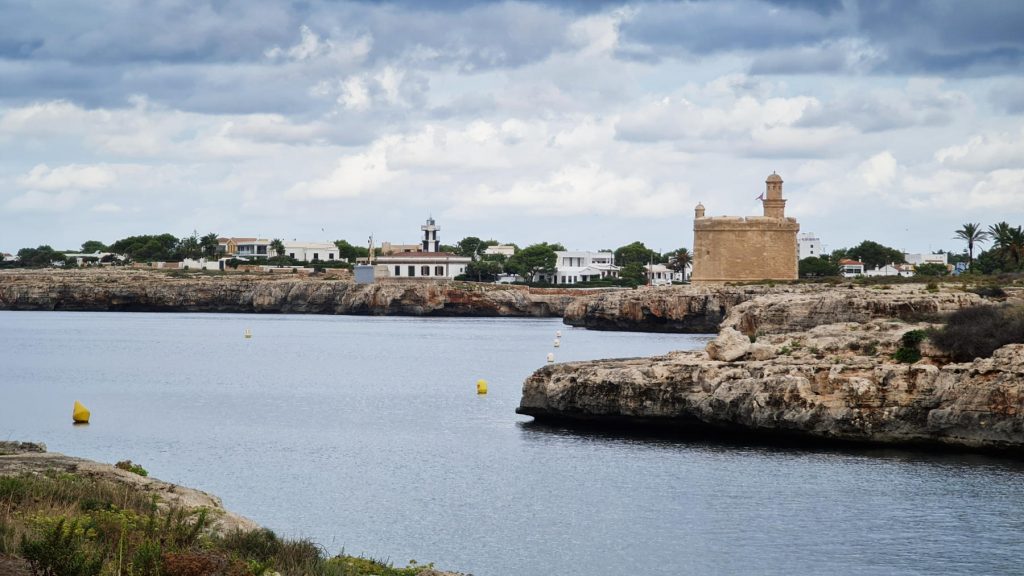 (this last one showing the fortification, which I now know is called Castell de Sant Nicolau, and the lighthouse in the reverse order from yesterday), past the ferry terminal where the boats from e.g. Mallorca arrive, 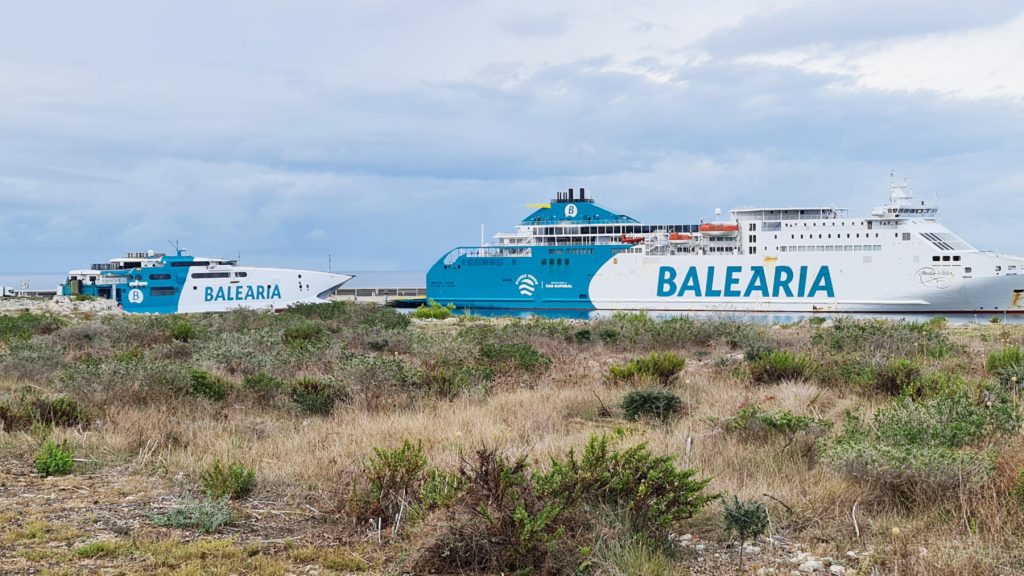 and past another fortification called the Torre Santandria

which had an eponymous Cala. 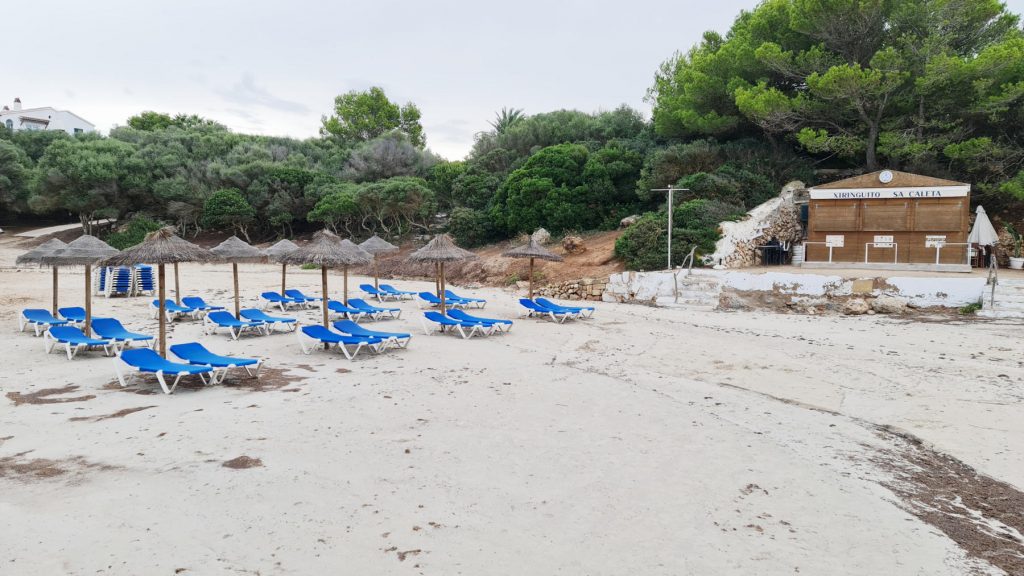 After this, we got to a path 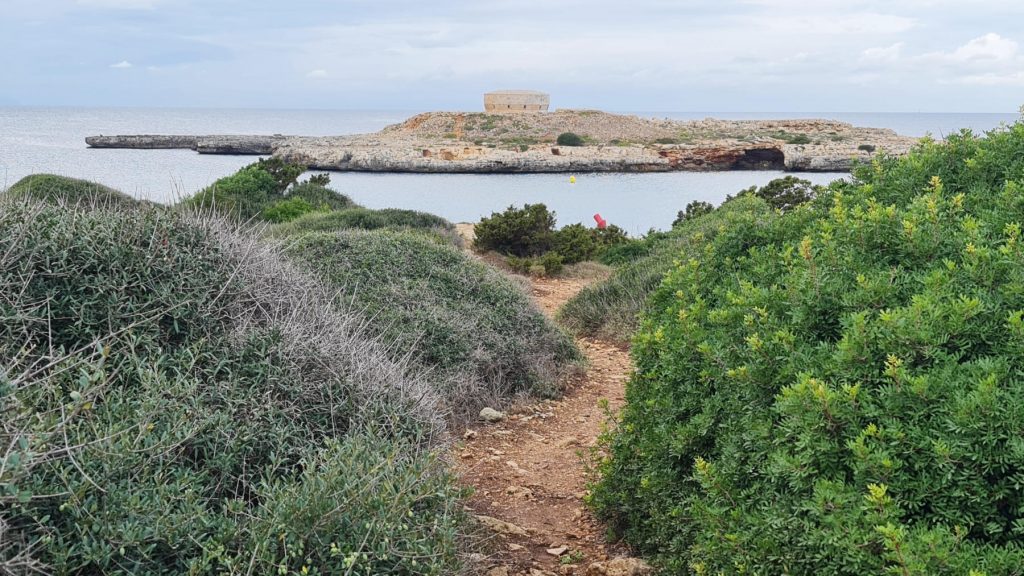 which had a surface just like the one which we found so horrid yesterday.  Today, there being no lashing rain or howling gales, it had sunk to being merely tedious and not very comfortable to walk on rather than actively unpleasant.  With the exception of one surfacing past a neighbourhood called Cala Blanca 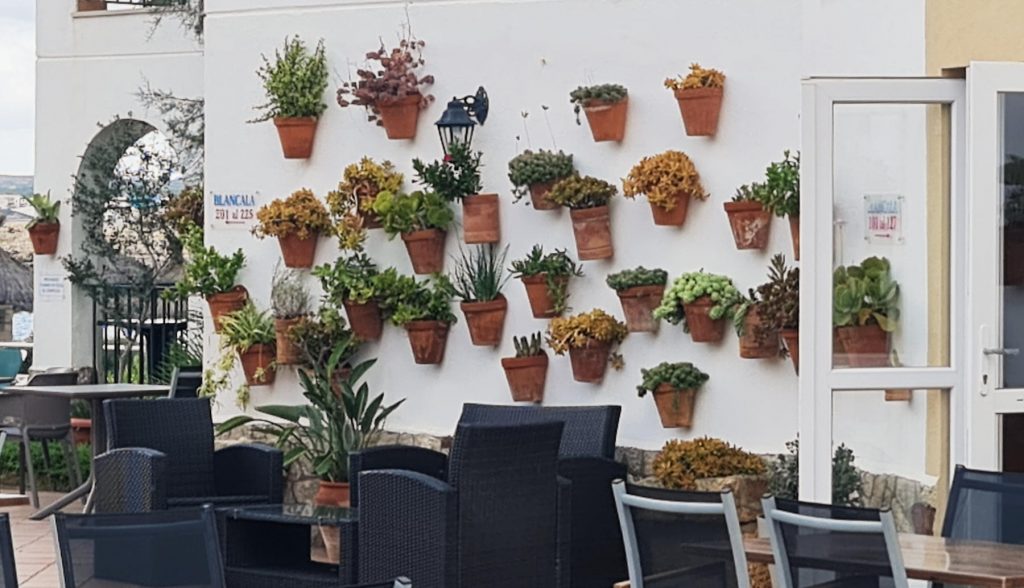 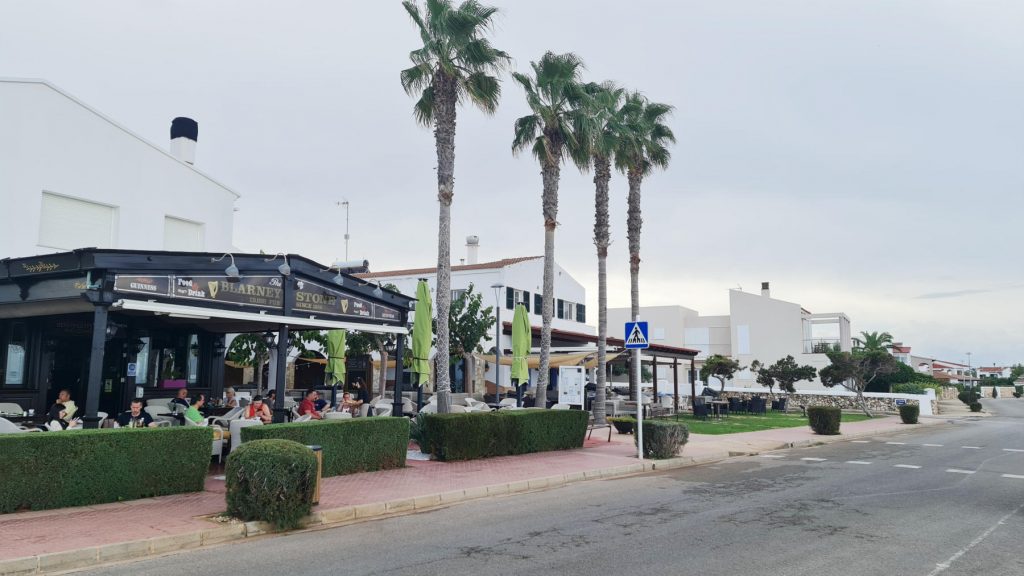 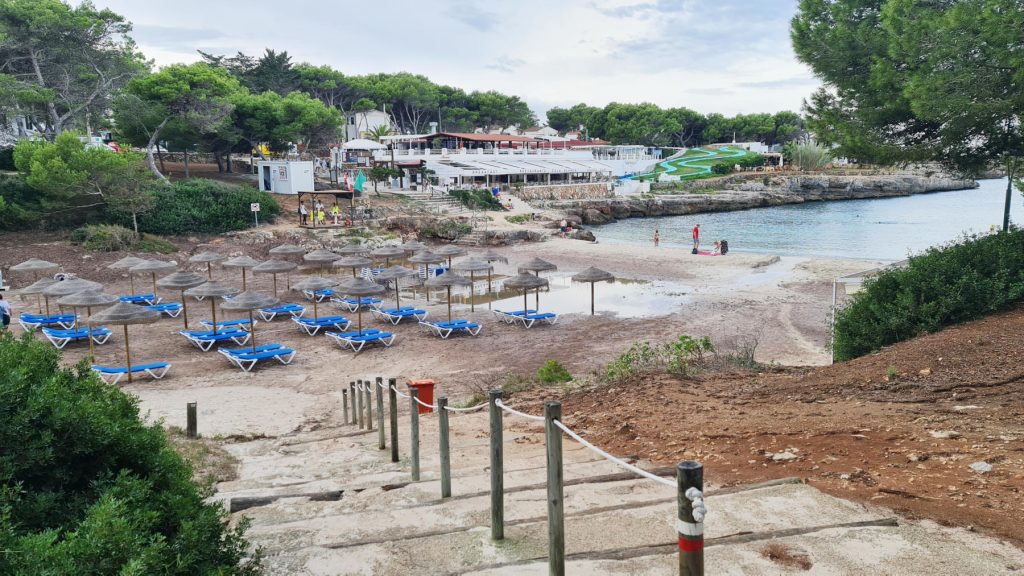 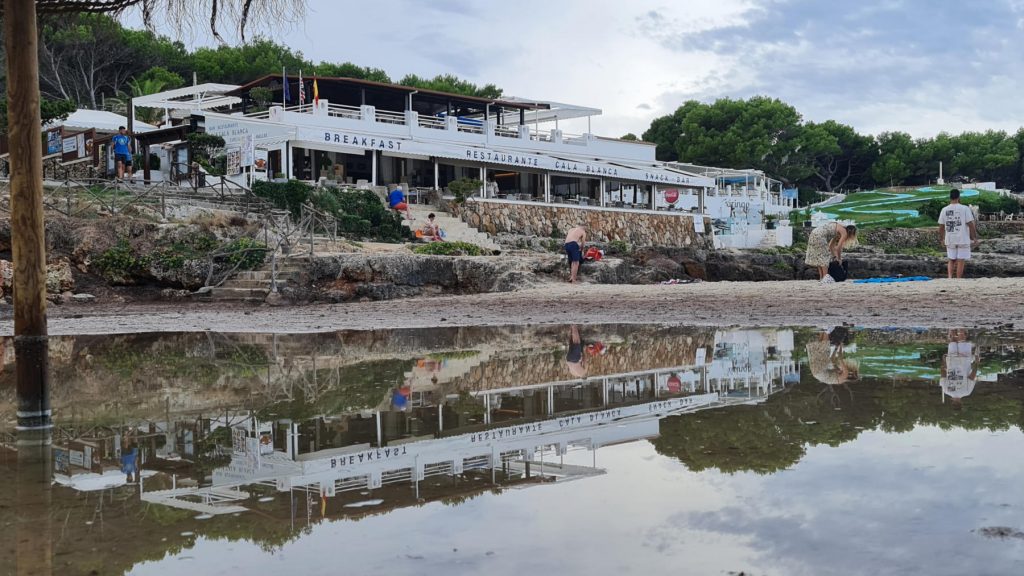 this path was to be our constant underfoot companion from this point until we reached Asterix. OK, Cap d’Artrutx. Sorry.

There’s not a lot of variety of scenery on this part of the track.  The odd occasional stone hut 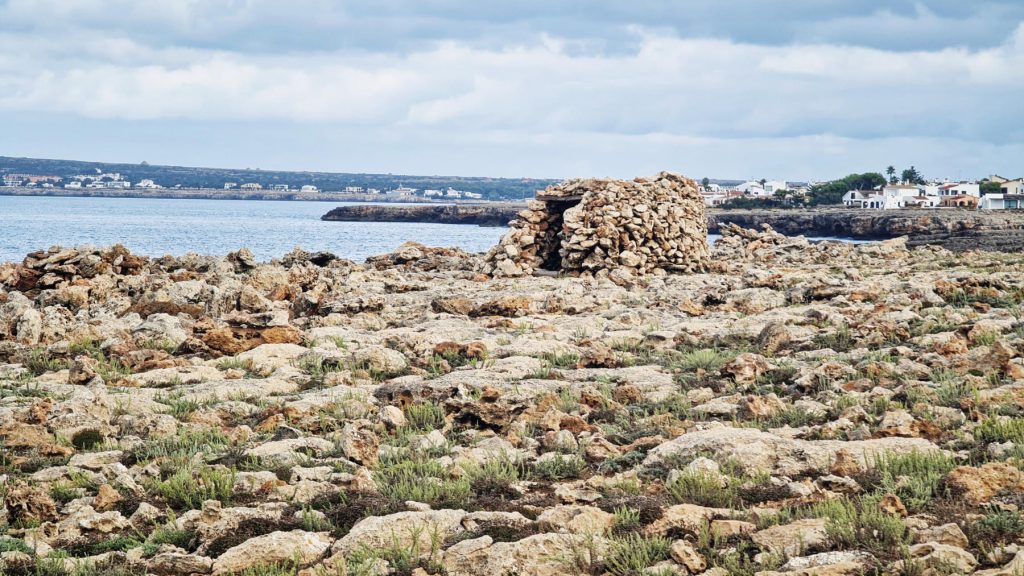 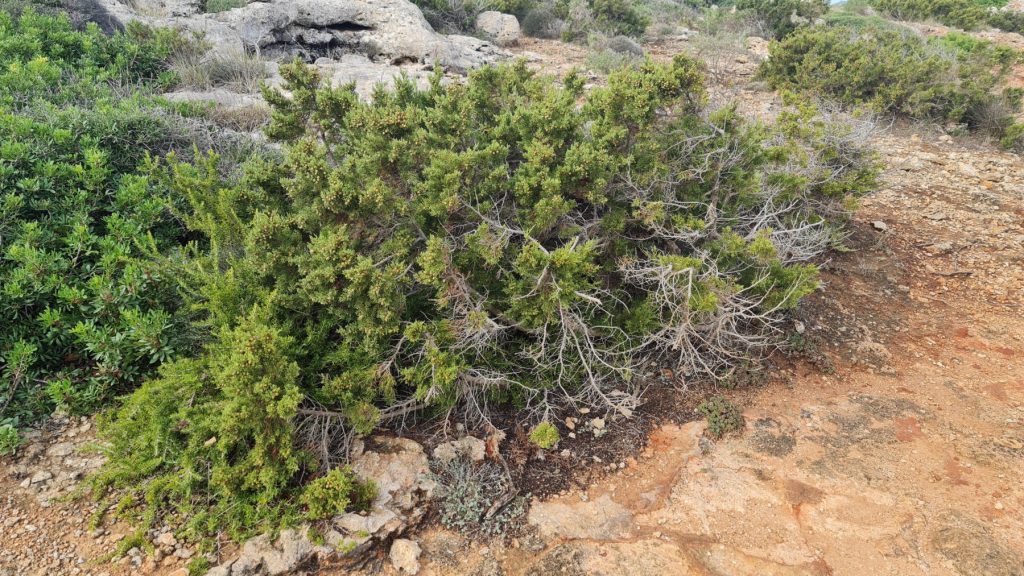 is about it (is this raw material for the local Xoriguer gin, we wonder?). However, unvarying as it was, there were quite a few groups of people walking the track 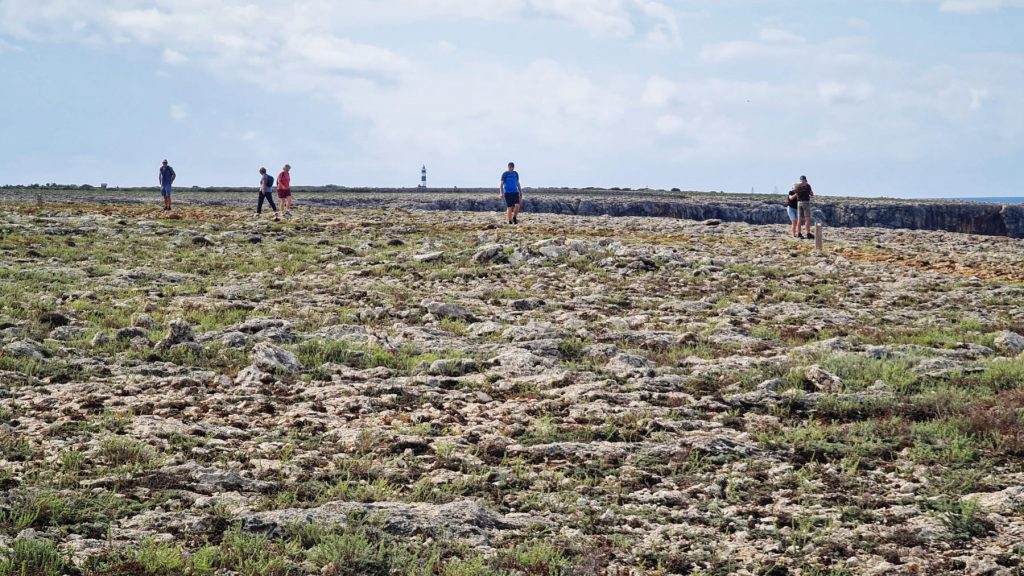 which made it a popular pathtime.* In the distance, you might be able to make out the lighthouse at  Cap d’Artrutx which was to be our first objective.  Eventually, the neighbourhood around the lighthouse came into view, too 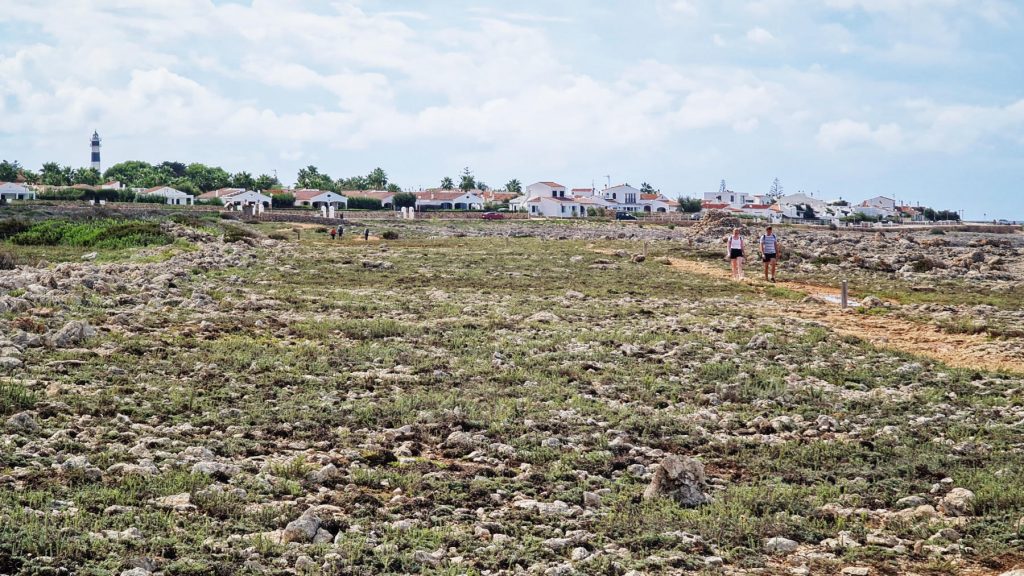 and shortly thereafter finished the official stage 11 of the Cami.  However, our objective lay a little further on, in Cala en Bosc, where we were to be picked up, so we soldiered on in what had now become quite a hot sunny day.

Cap d’Artrutx has some posh houses 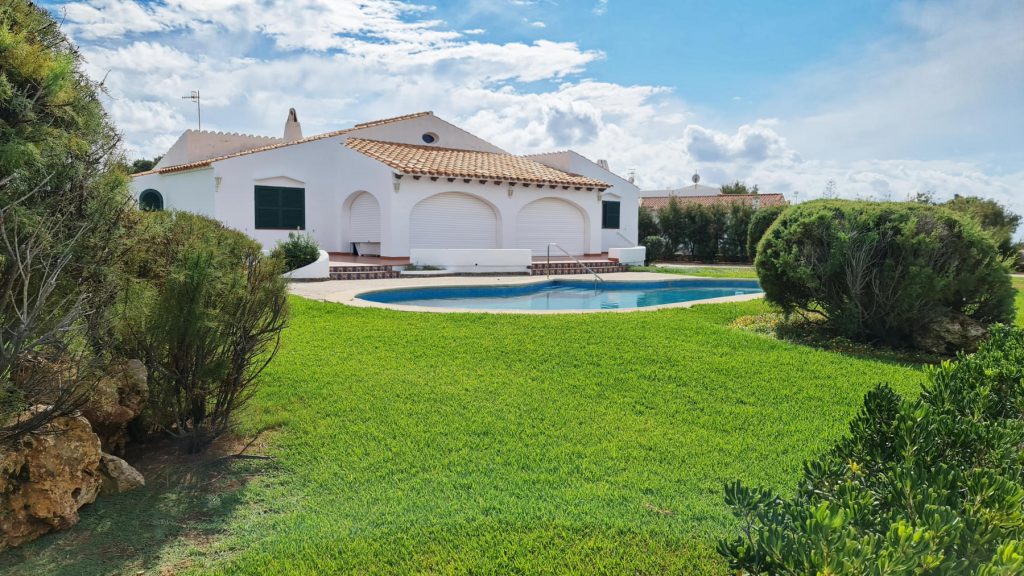 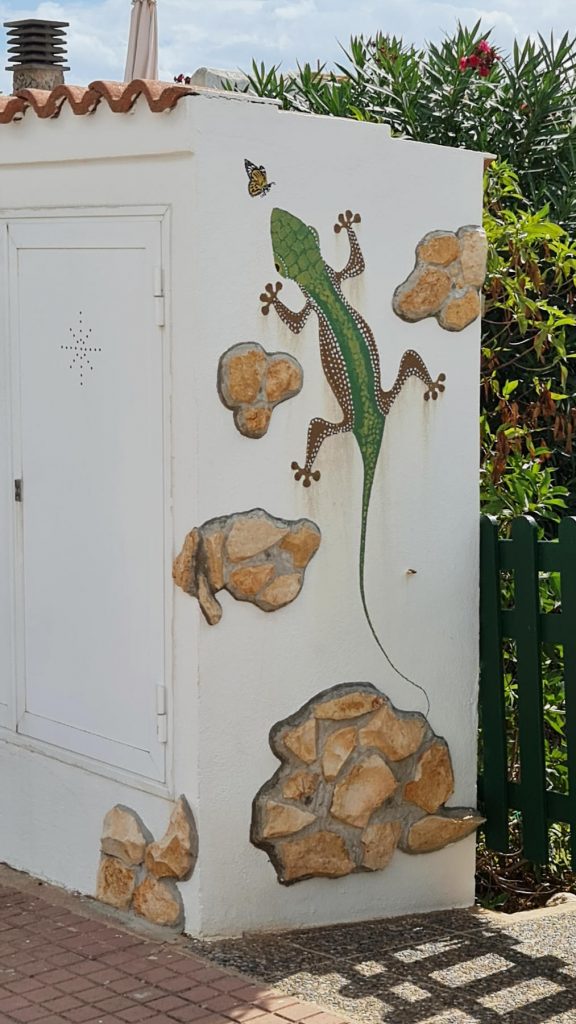 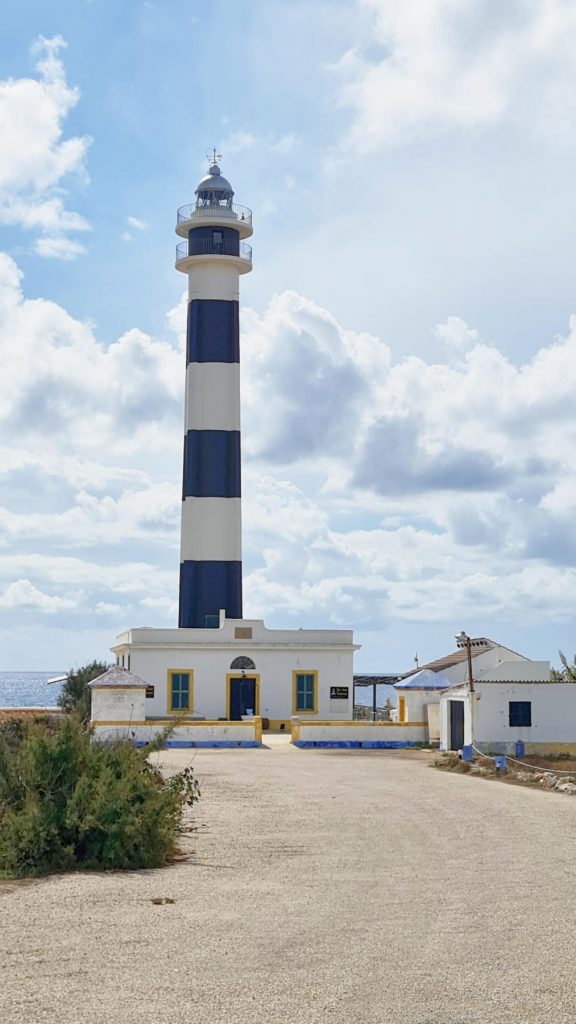 and, of course, the lighthouse itself. The road carries on towards Cala en Bosc 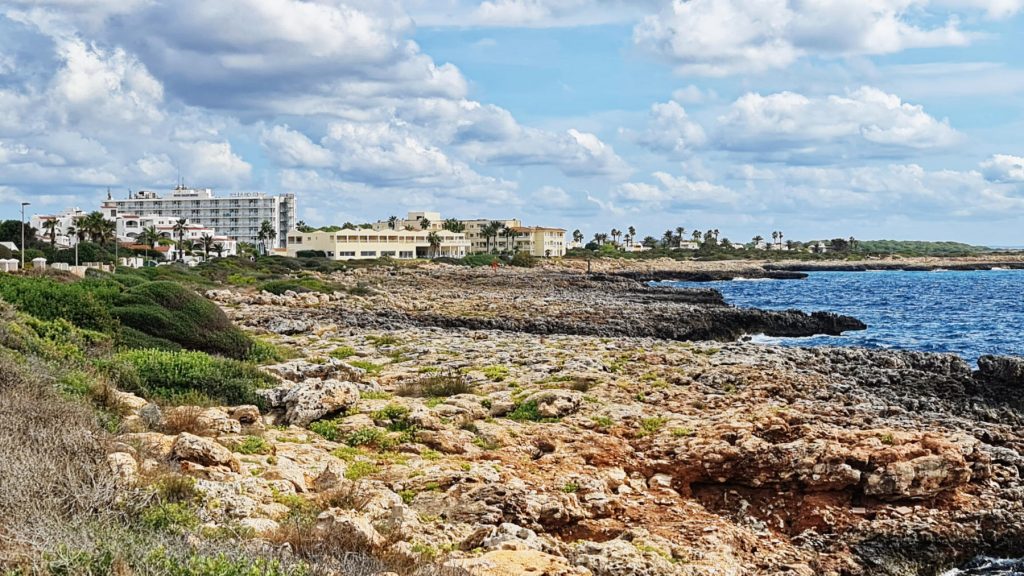 which welcomes one with quite a dramatic arch bridge 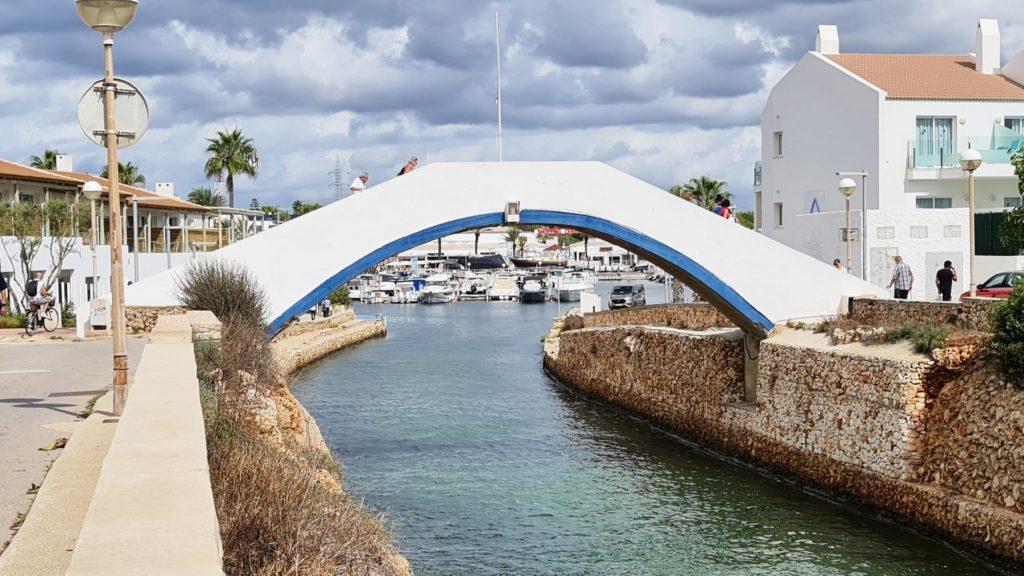 after which we found the car park that marked the formal end of the day’s walking.  We had just over an hour to wait for our pickup so we retired to the tourist paradise that lies just behind this welcoming bridge. 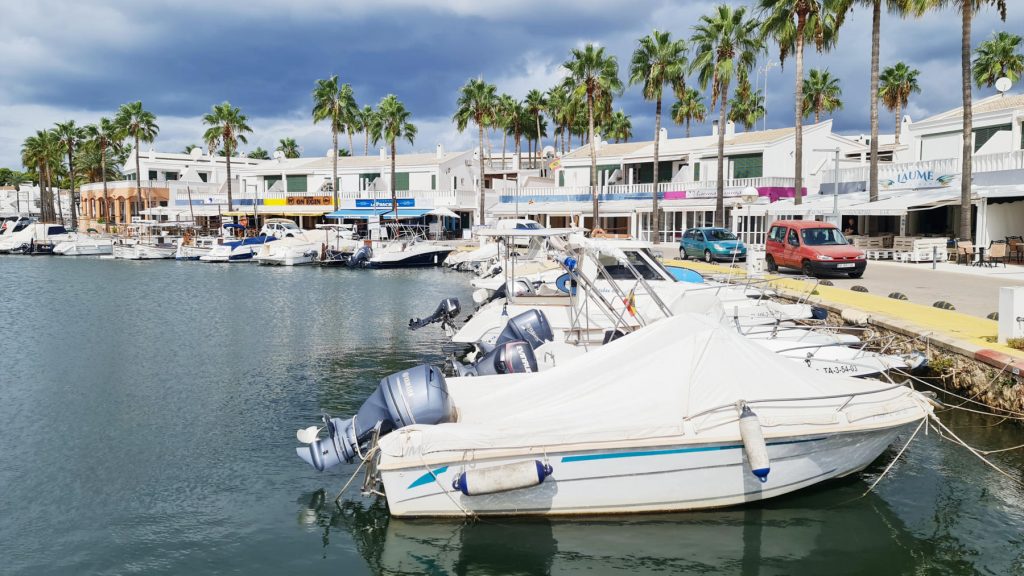 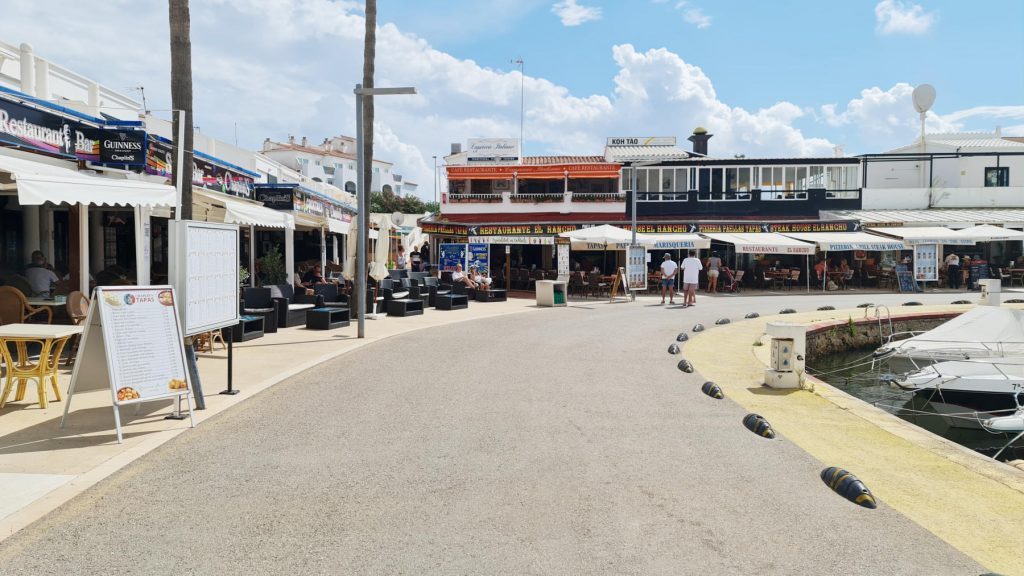 On our way there, we’d had a bit of a dialogue with Diego in the Cami360 team, from which we started to realise just how impactful yesterday’s weather had been; several groups had been unable to complete their stages because paths had been washed away or submerged. Diego sent us an aerial shot of Binimel-là (you’ll remember – the start point of the Brutal Day, Stage 6), which showed the amount of mud being washed out into the bay there and along the coast. 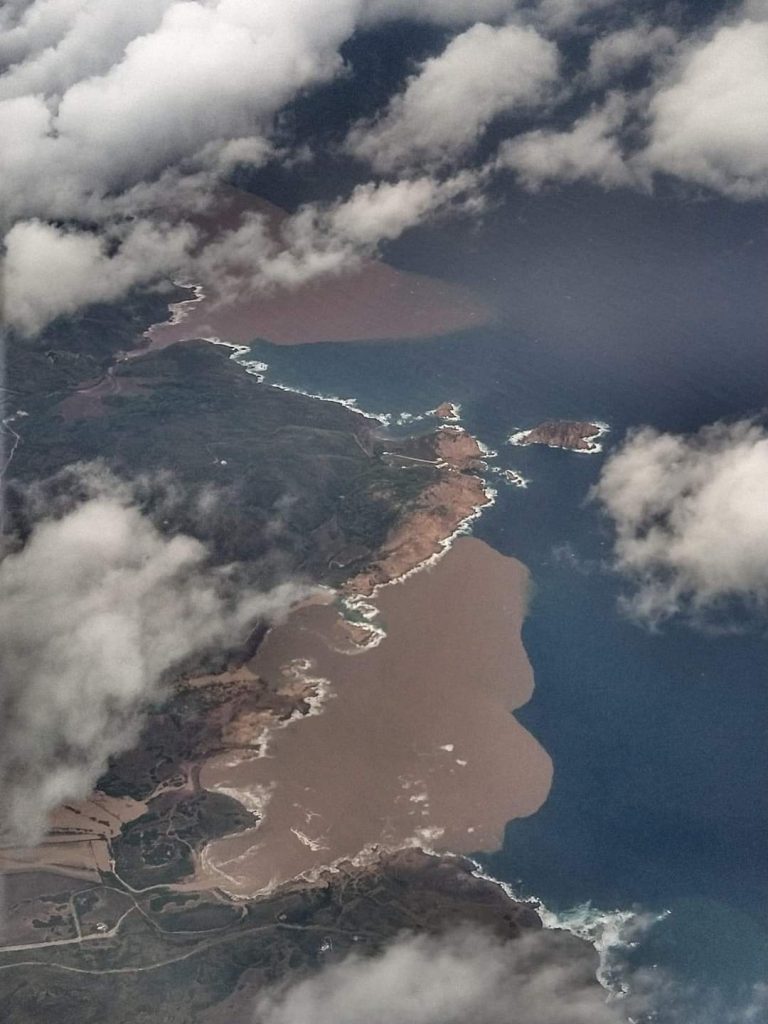 Basically, roughly 20% of the expected yearly rainfall had fallen in that one day; so the poor guys in the Cami360 team were frantically trying to work out logistics to keep things under control and moving on.  We learned that now there were actually some 50 groups that were walking or biking the trail and so one can imagine the difficulty of trying to make sure that people were retrieved from/deposited in the right places.  In the end, we were lucky and our original pickup schedule was OK, but at one stage there was talk of us trying to find a taxi back to Ciutadella (I was buggered if I was going to walk back, and that’s a certainty).

Anyhoo, we were able to settle ourselves in a classy (!) establishment called Chaplins Bar, and had a couple of drinks and some very good salads until it was time to be returned to  Ciutadella.

And that’s the day so far.  Some tapas beckons as a late afternoon meal before we have to pack up and say good-bye to Ciutadella tomorrow.  But We’ll Be Back, after either we’ve finished the Cami or it’s finished us.

At around 7.15pm, we headed out into Ciutadella in search of tapas, and discovered various things:

This is a “gastrobar” set in a farmhouse which features a windmill, and which now does multiple duty as a cocktail bar, a tapas bar and full restaurant, and, it would apear, a main thoroughfare between a car park and the town centre.  It is delightful inside.

but wasn’t due to serve food until 8pm, so we contented ourselves with a G&T whilst we took in its surroundings.

2. Evenings start at 8pm in Ciutadella

We walked past Es Pou and its companion restaurants in Plaça Nova, and headed for a set of umbrellas we’d noticed the day before.  It turned out to belong to a tapas restaurant called Maramao.  it looked inviting; but it turned out that it, too, didn’t open until 8pm.  However, by this time it was nearly that time, and they offered us a drink, so we had a cocktail whilst awaiting service.  So it was that we were the first to take a seat in the little alleyway outside; and no sooner had we done that then all its outdoor tables seemed to be taken.  They should have offered us a discount for bringing the punters in.  The tapas there is delicious, so we had slightly too much before heading back to our hotel.

3. There’s a lovely evening buzz in Ciutadella as well

This Insta post covers both this lovely atmosphere in the Plaça Nova and the alleyway outside Maramao.

From here on in, our walks take us from place to place with no pickups, so our schedule is ours after tomorrow’s 0845 start, when we are returned to Cala en Bosc to pick up where we left off today and do two further stages of the Cami, nos. 12 and 13.  That’s a total of about 17.5km, so quite a long day beckons, although not too much up and down is stated to be involved.

Before I leave you, here are some stats for today:

So we’re still on track to average 10 miles a day, having completed now over 82 miles in 8 days. Come back tomorrow and find out how our journey progresses – it’ll be nice to have your company.