Friday 24 September 2021 – We had an Apartment Morning! Nice Cup Of Tea First Thing!! Toast!!! Marmite!!!! (For Jane, Natural Yogurt! Fruit!!) With such small pleasures is a worthwhile life truly completed.

Then it was time to get going, so we packed our cases and prepared to move out. Jane heard the voice of Maria, one of the Cami360 drivers who had been taking us to and from places, and so we were able to hand over our cases to her so that they could be transported to our next accommodation, at Sant Tomàs, some (officially) 11.56km away. The accommodation was also to be an apartment, which gave us the very real prospect of a Nice Cup Of Tea when we arrived there. For old fogies such as us, this counts as an incentive, and since the trail contained the greatest ascent of the south island stages (241m), we needed all the help we could get.

If you want to see a video summary of the route and some of the photos, it is, as usual, available on Relive.

The trail today was basically through, along, up, down and across various ravines (barrancs, you’ll remember from yesterday, because you were paying attention, weren’t you?). This was clear right from the start as we went through Cala Galdana town.

We passed the town beach 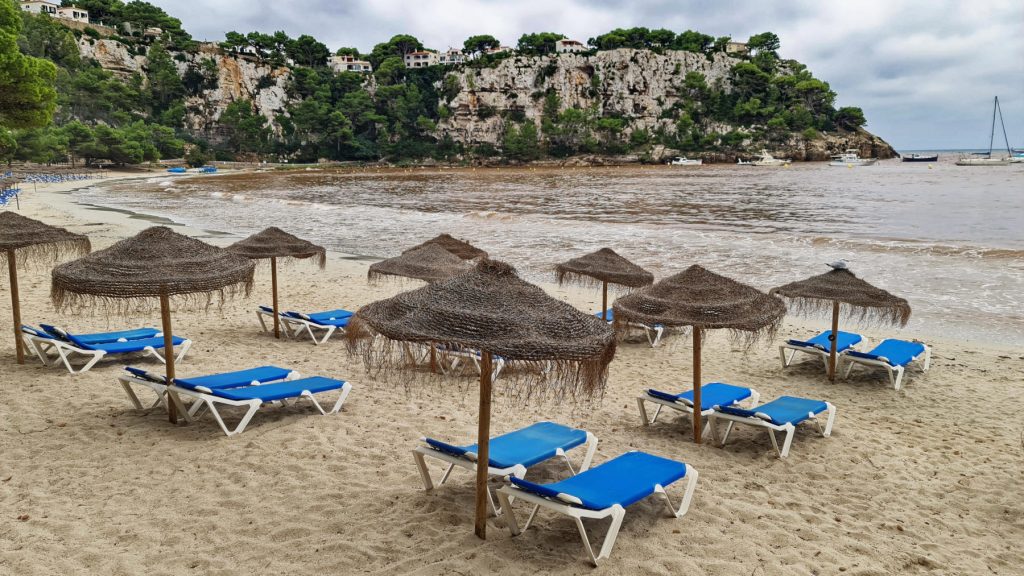 and started up the side of the ravine by the town. This involved steps. Lots of steps. 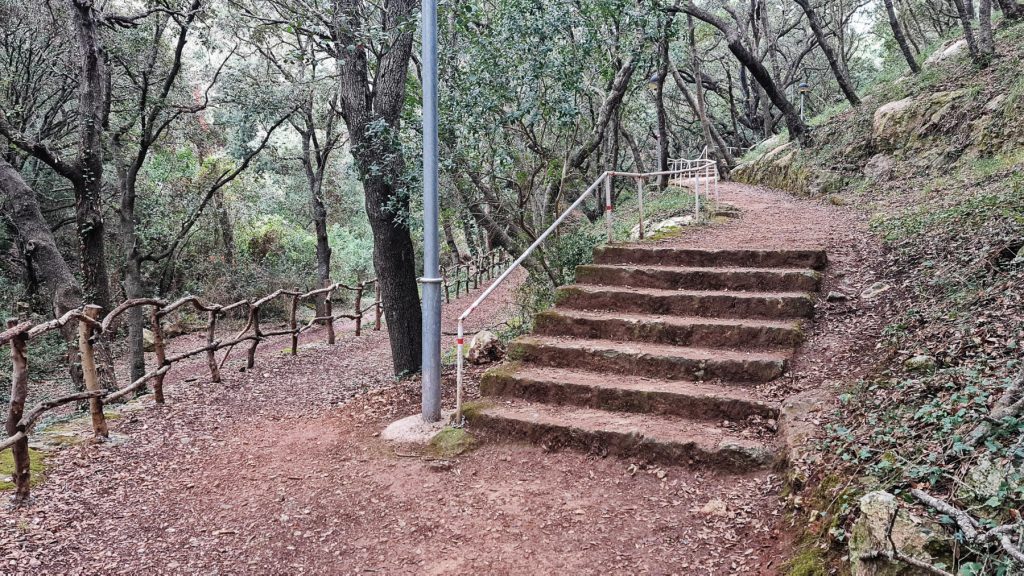 Once we got to the top of these, we were at the formal end of Cami stage 13 and therefore at the start of, erm, 14. The track was even vaguely reminiscent of something you might find in the Surrey Hills. Generally, from here on in, the going underfoot was largely much nicer than the ceaseless rocky paths we’d had since Cala Morell, some 40 slipping, stumbling and swearing miles ago. Since the day was not scorching hot but very humid, this was welcome. We never actually saw the sun, but it was still sweltering and the easier going was a definite bonus. 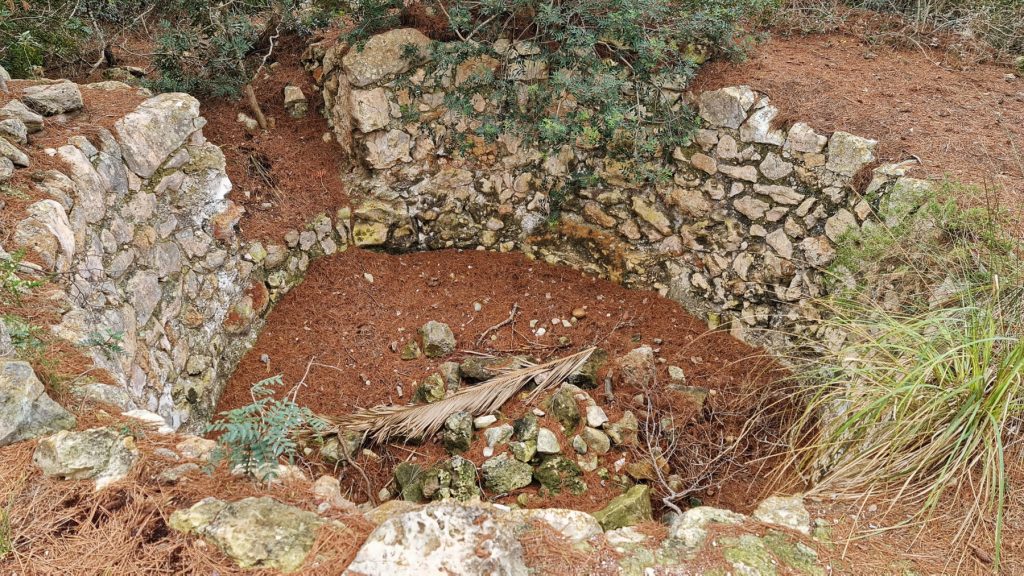 and Cala Mitjana, which was actually much more remarkable than Cala Son Vell had been a couple of days ago. The surging waves really pounded in with a deep bass note (which, sadly, the microphone on my phone couldn’t to justice to, hence here’s a still). 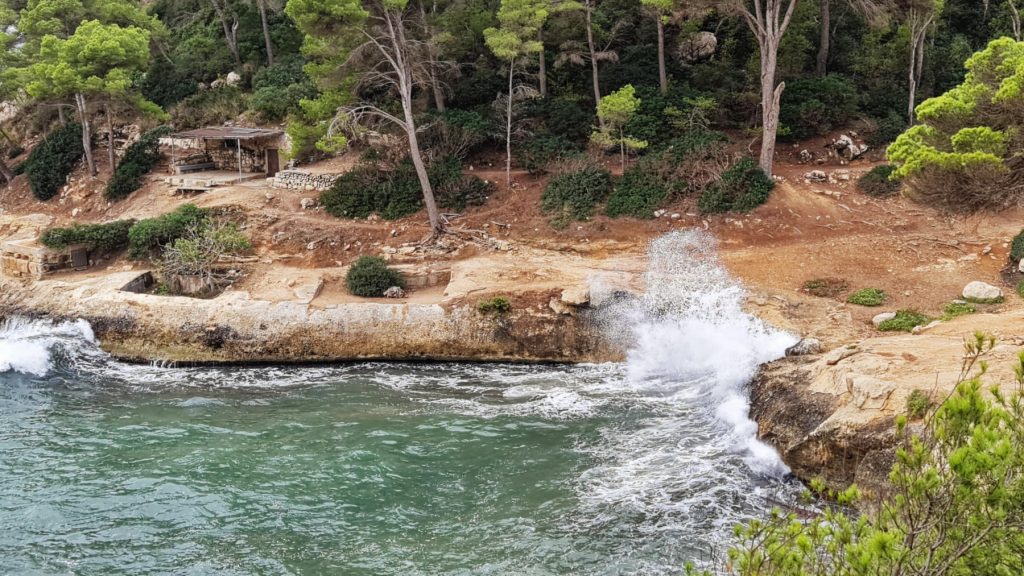 On the far side of the cove you can see a Spanish Civil War-era bunker. 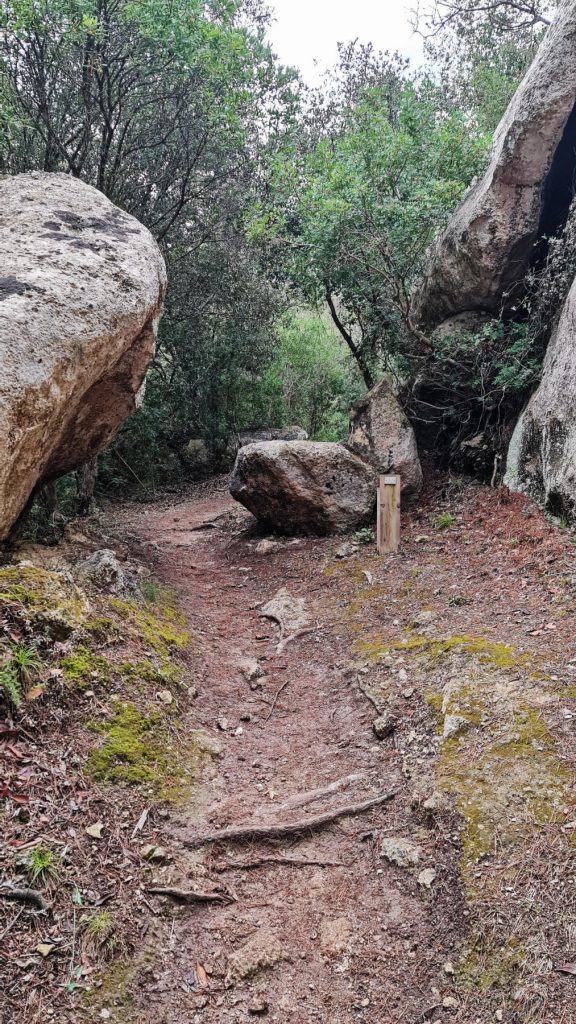 and we passed Mystery Object #2 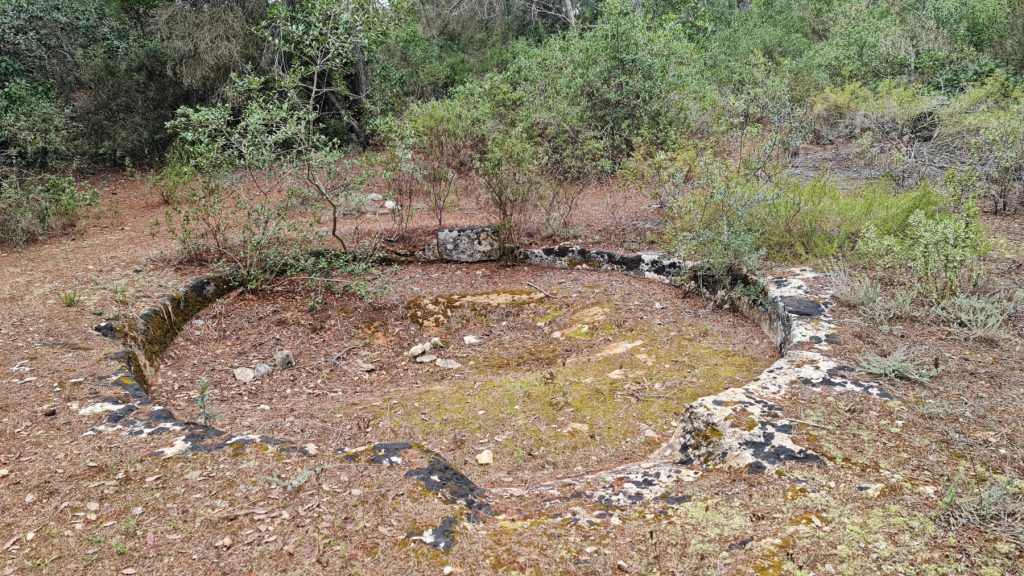 The ravinous (!) nature of the scenery was quite spectacular in places. 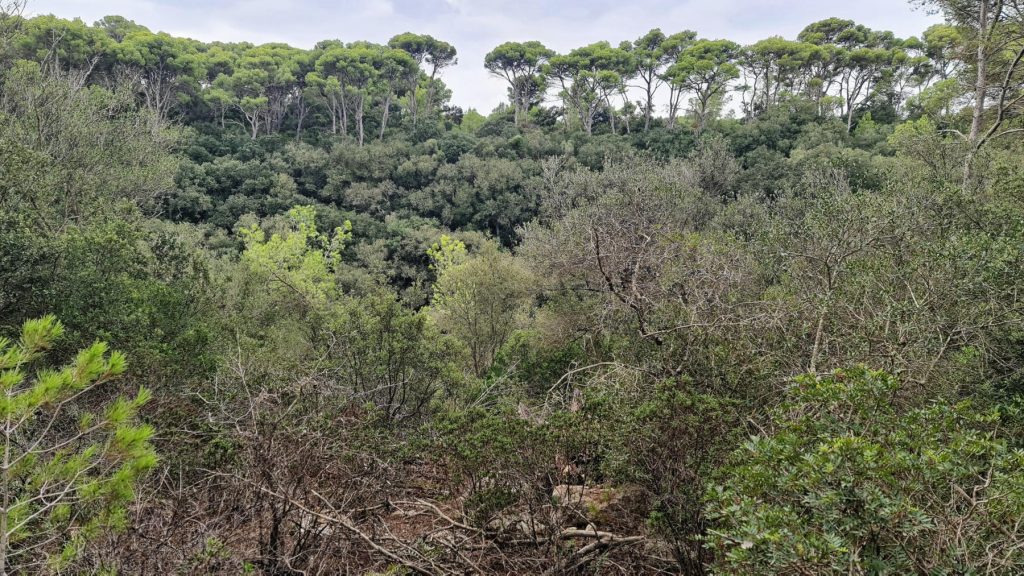 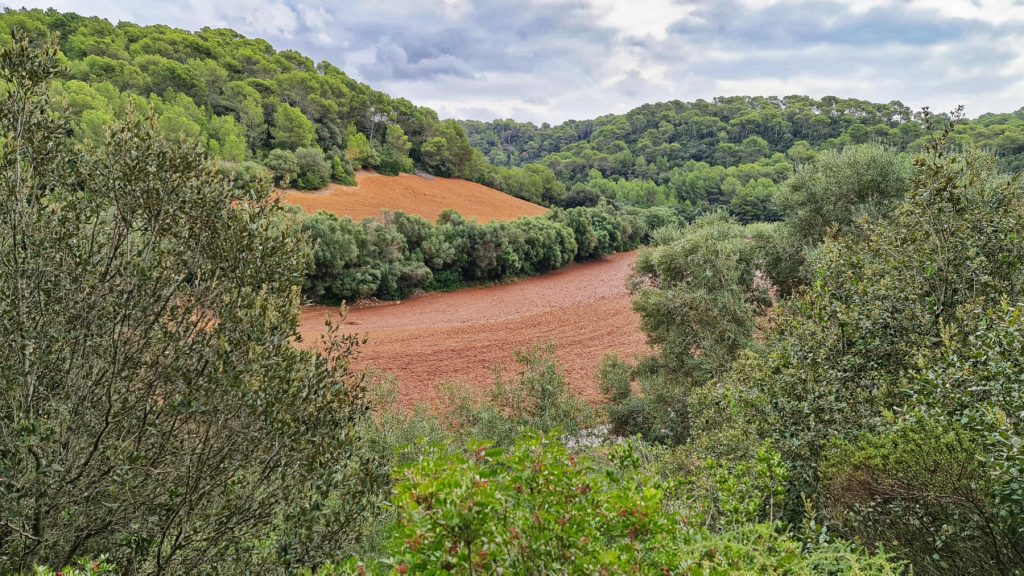 We crossed the lower field in this picture as we came down one side of a ravine and before going up the side of the next one. 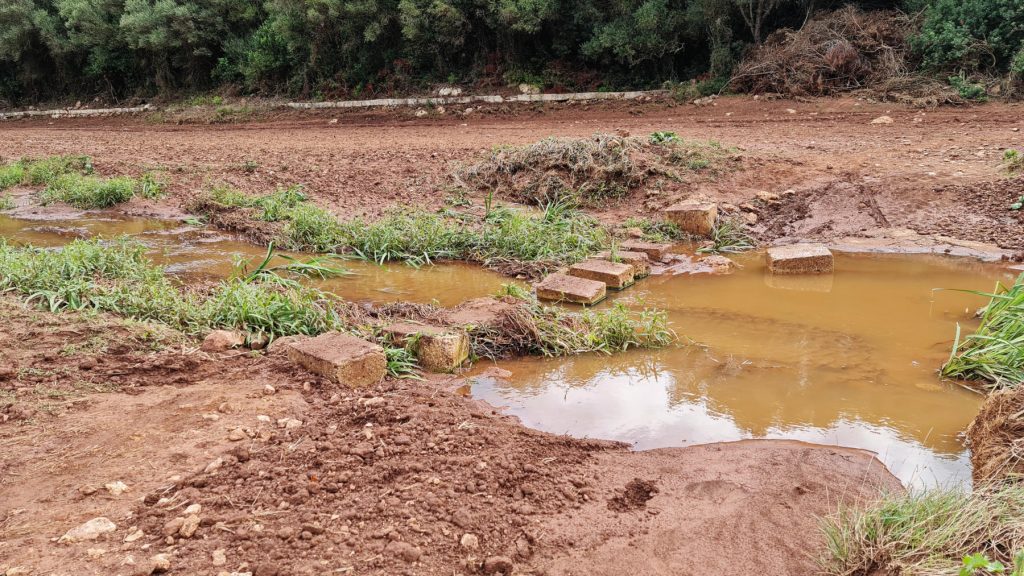 and wondered, as we passed, what exactly was the crop to be grown in this obviously prepared terrain? Stones? 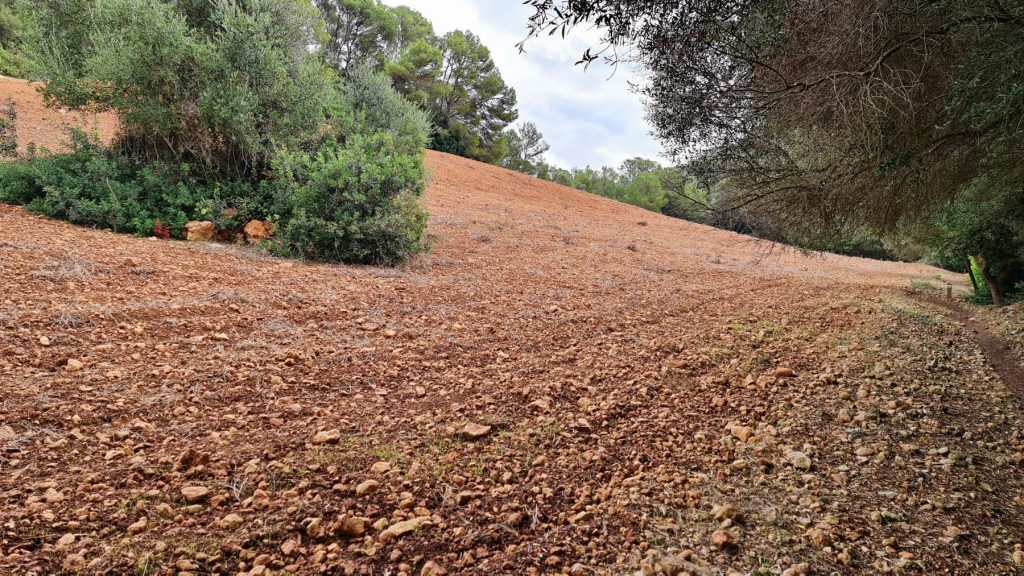 Anyway, the views were great. 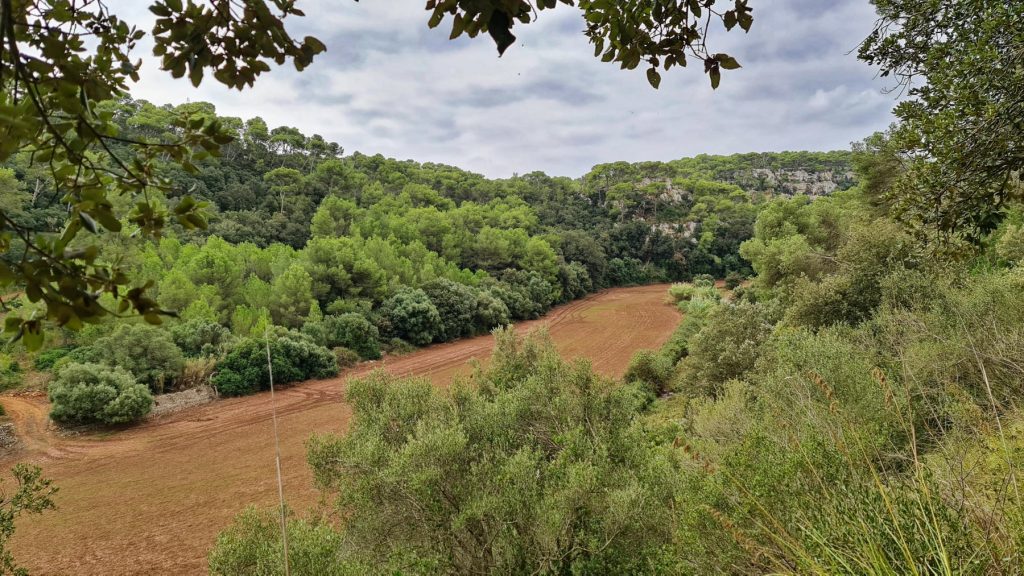 We moved from forest into open country for short while 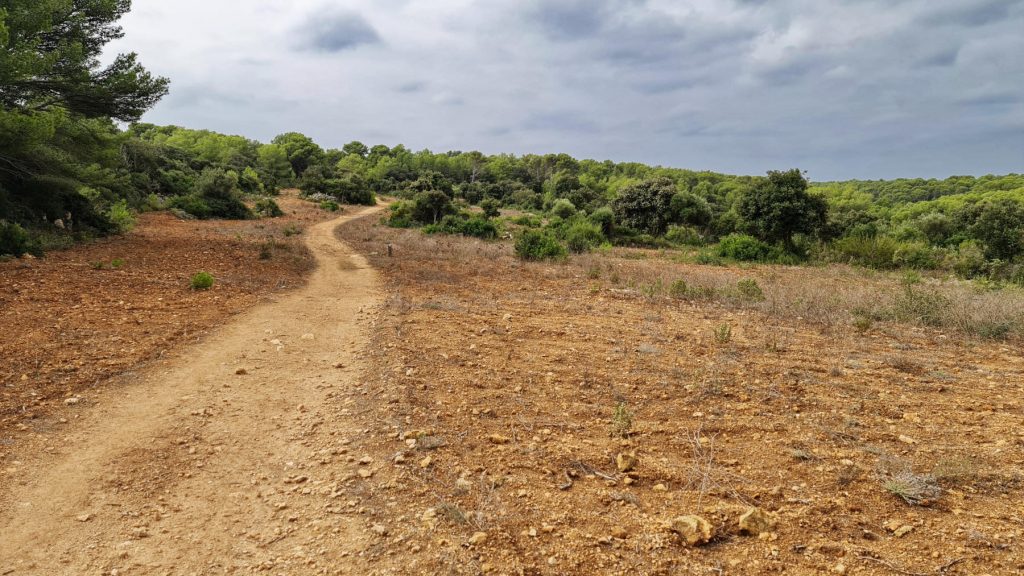 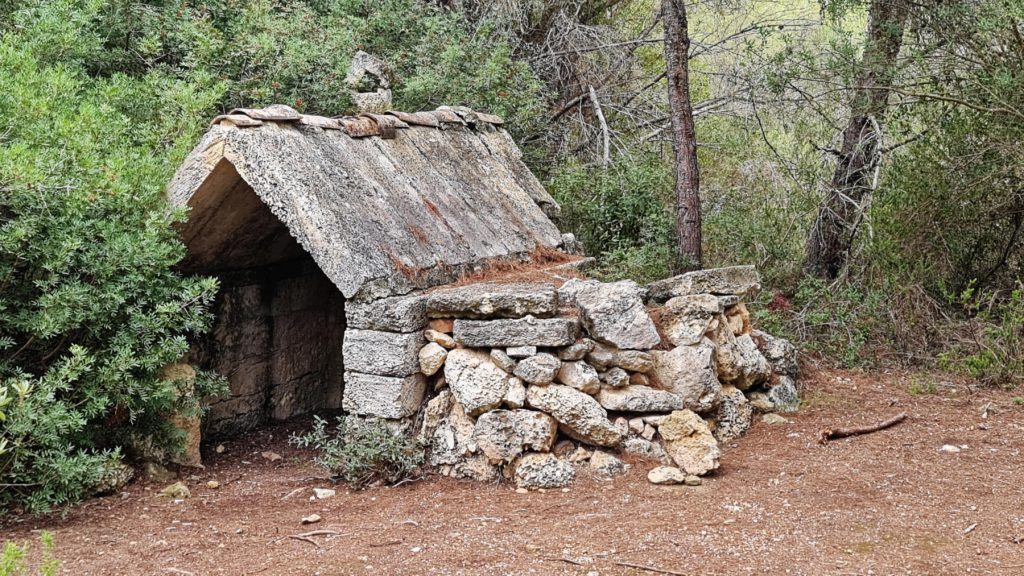 (yes, I can see it’s a hut, but it’s little larger than a dog kennel, so what’s it for?) The views continued to be quite impressive across the ravines as we crossed them. 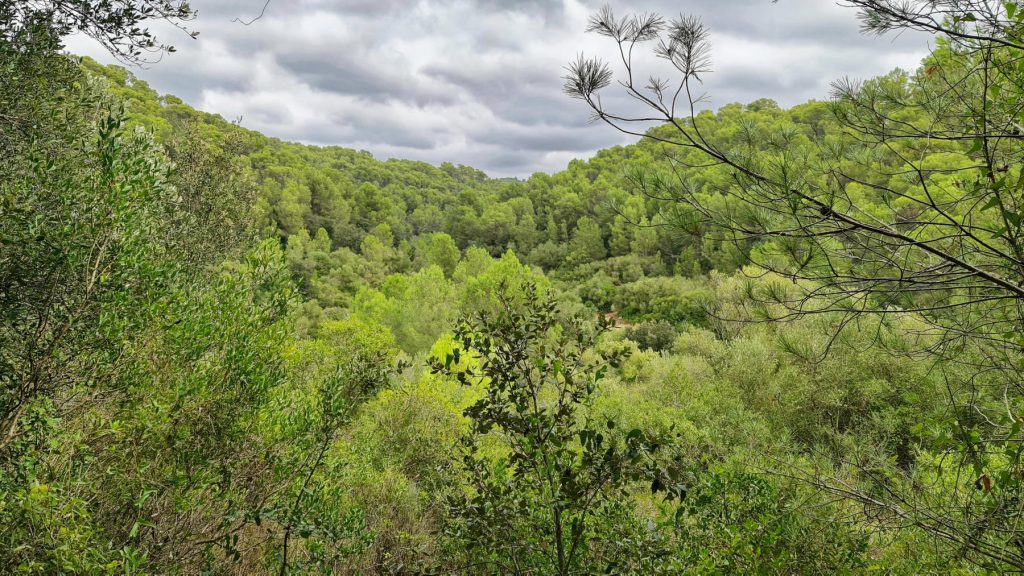 and then we came upon post number 187 on the route, which signalled a possible diversion. So we left the formal Cami trail and followed a “Variant for Hiking”. 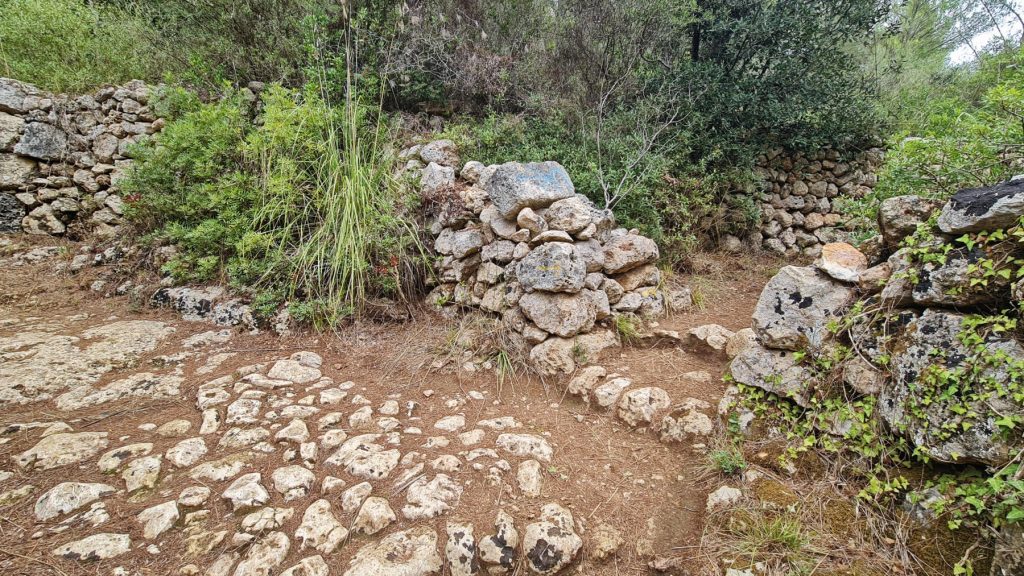 The blue writing on the wall here says “Cova”, by the way. This took us along a track past various signs telling us about the flora to be seen. I was amused by one 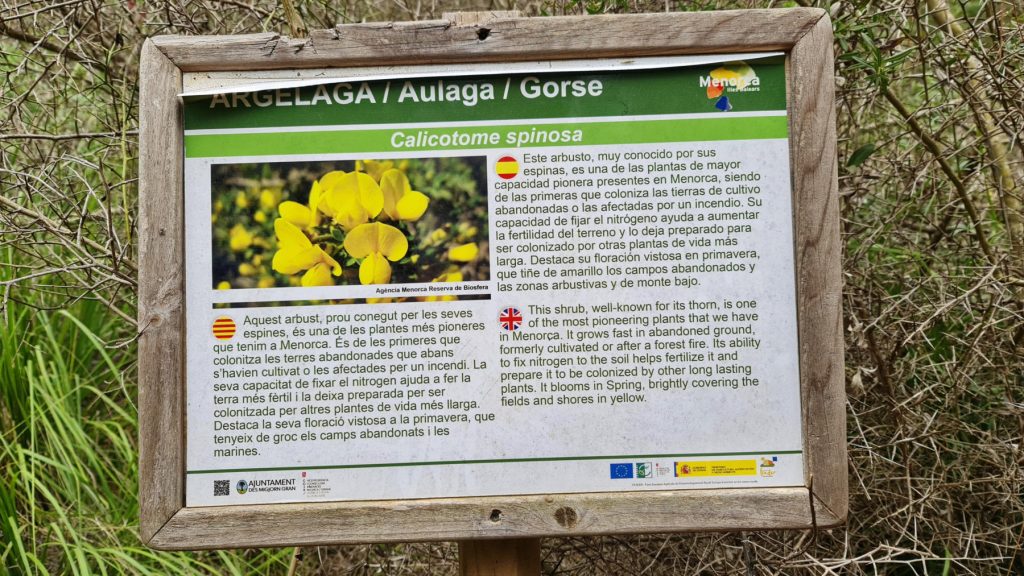 as we live near Chobham Common where gorse has revealed its true colours as a (yellow) pernicious, invasive nuisance which takes ruthless culling to keep under any vestige of control. The locals here will learn this in due course, I predict. 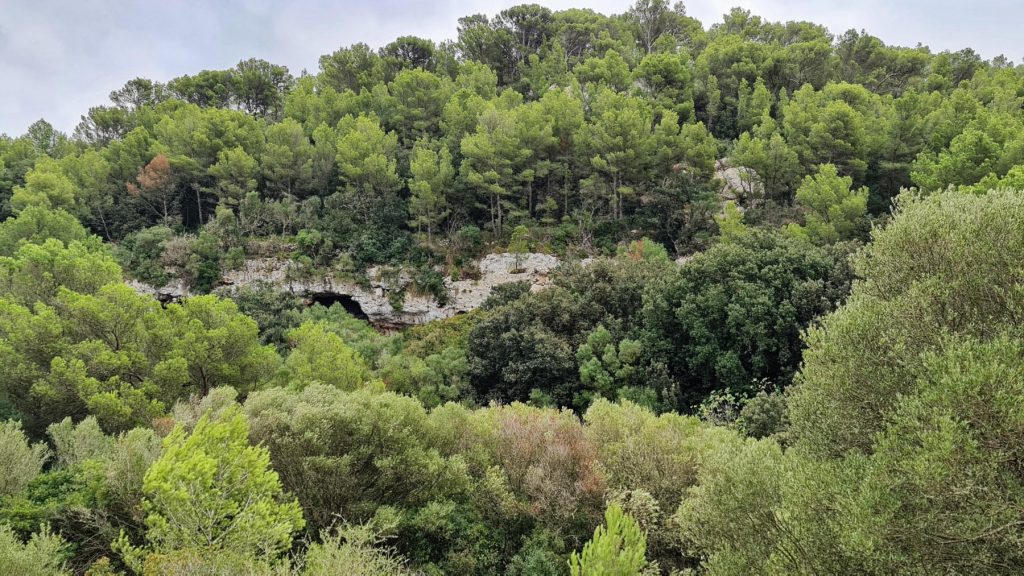 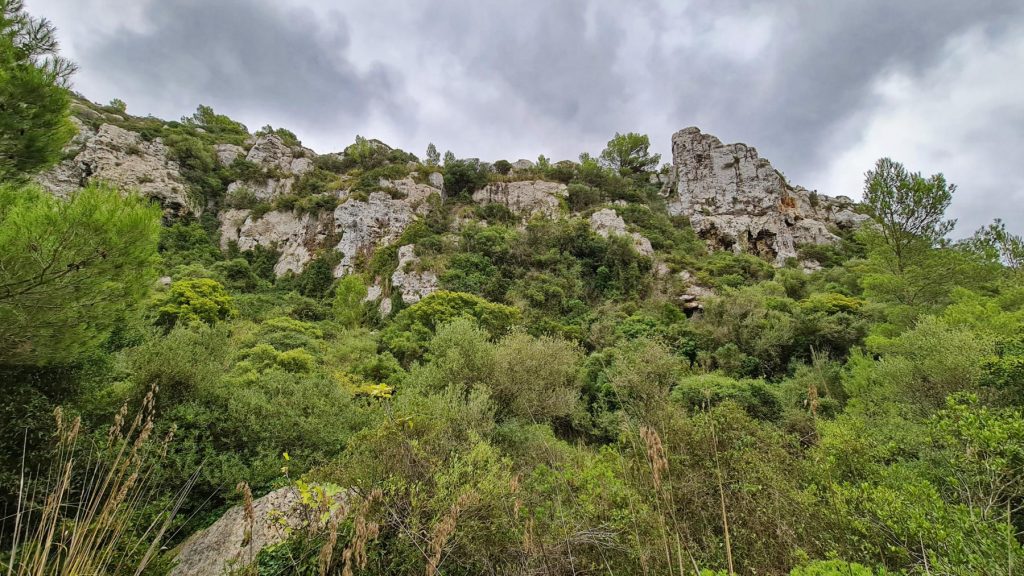 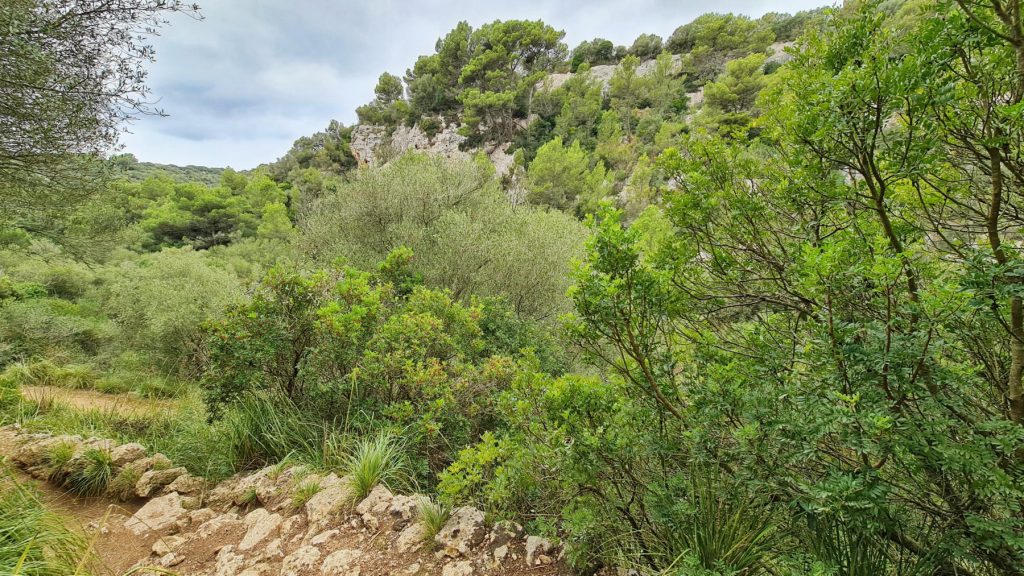 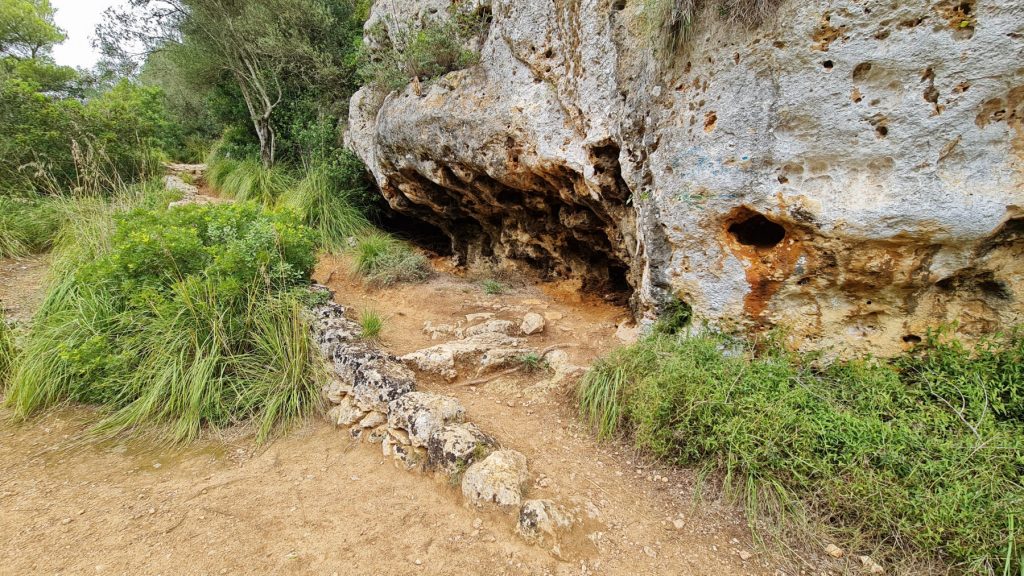 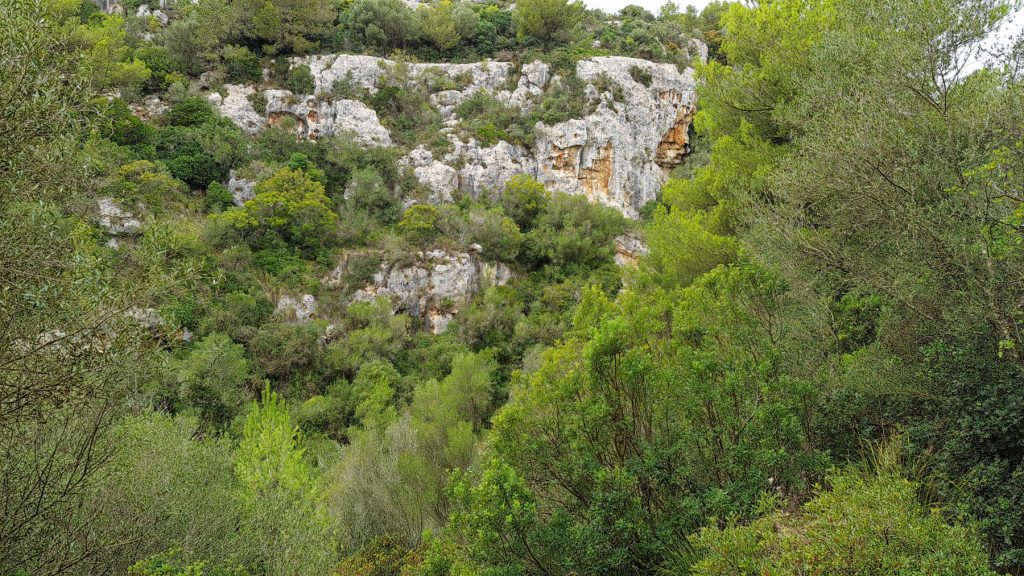 but the real interest lies a little further along, where a right turn, again (and very badly) indicated “COVA”, takes you to the Cova des Coloms, the Pigeons’ Cave.

Here are some stills, also. 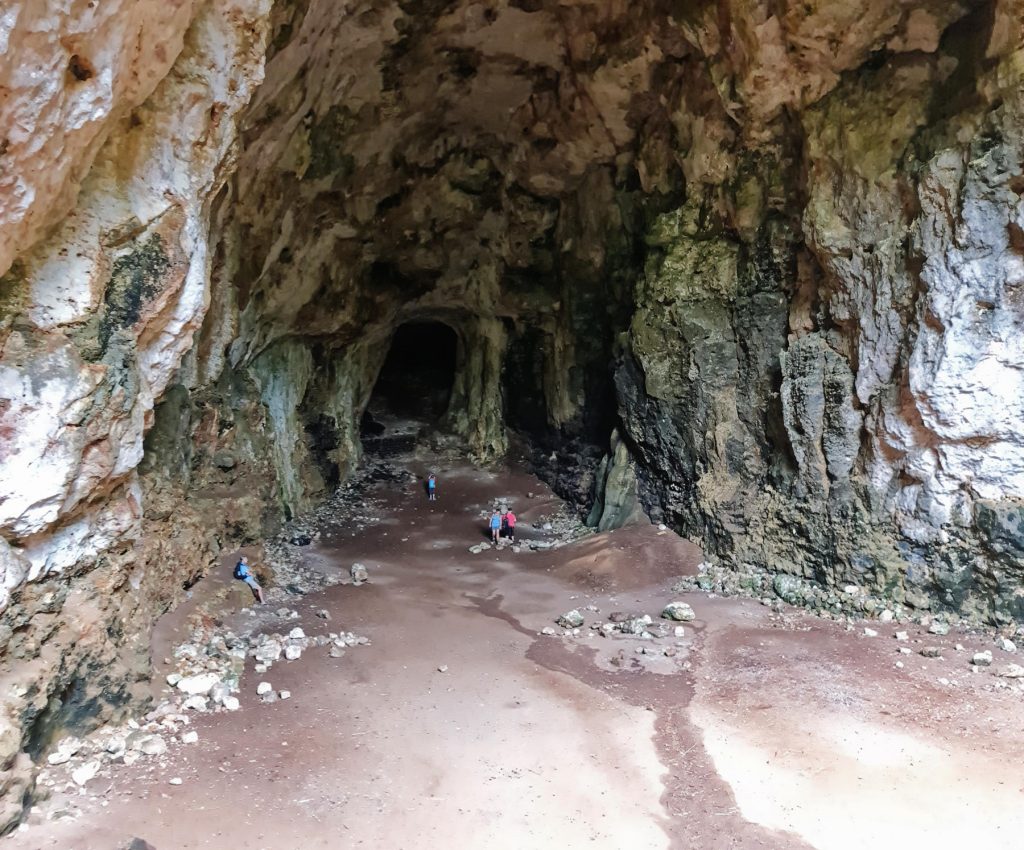 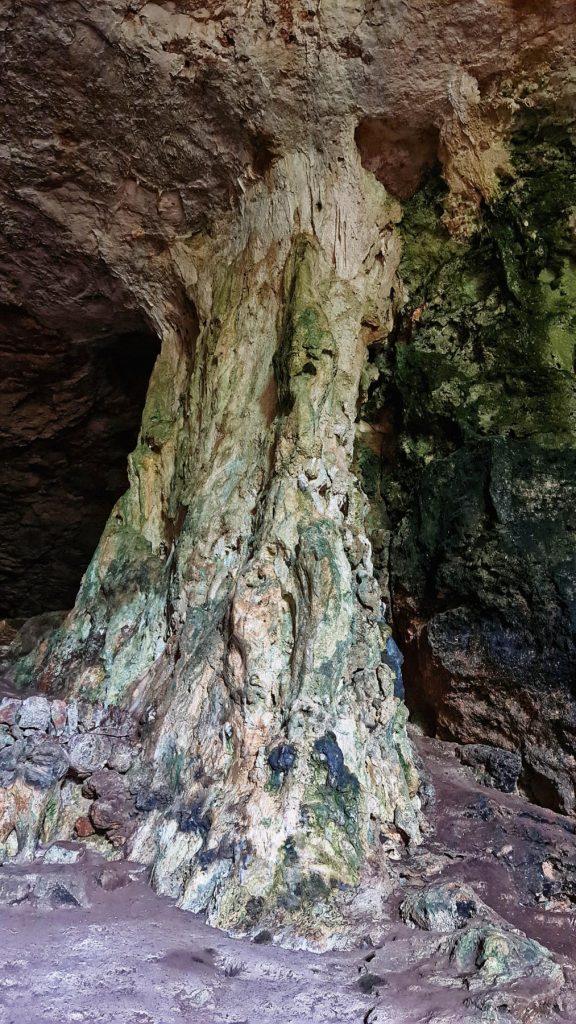 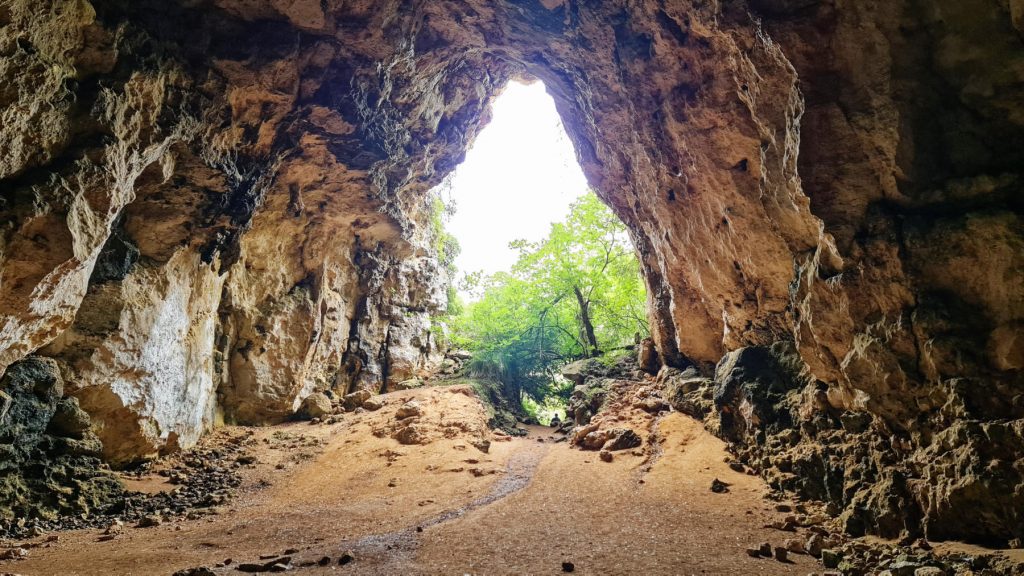 As you can see, this is quite spectacular.

It’s a karst cave, formed as water dissolves limestone when it percolates through. It’s about 25m high and 110m deep. Research indicates that the prehistoric Talaiotic people on the island used it for burial rituals; you can understand how they might have found this an awe-inspiring place. Delightfully, as its name suggests, pigeons were flying, roosting and cooing all around us.

The diversion to the cave adds about 3.4km to the overall length of the route, but it’s very much a worthwhile digression.

We went back to the Cami track and completed the short distance into Sant Tomàs, passing a nearby beach 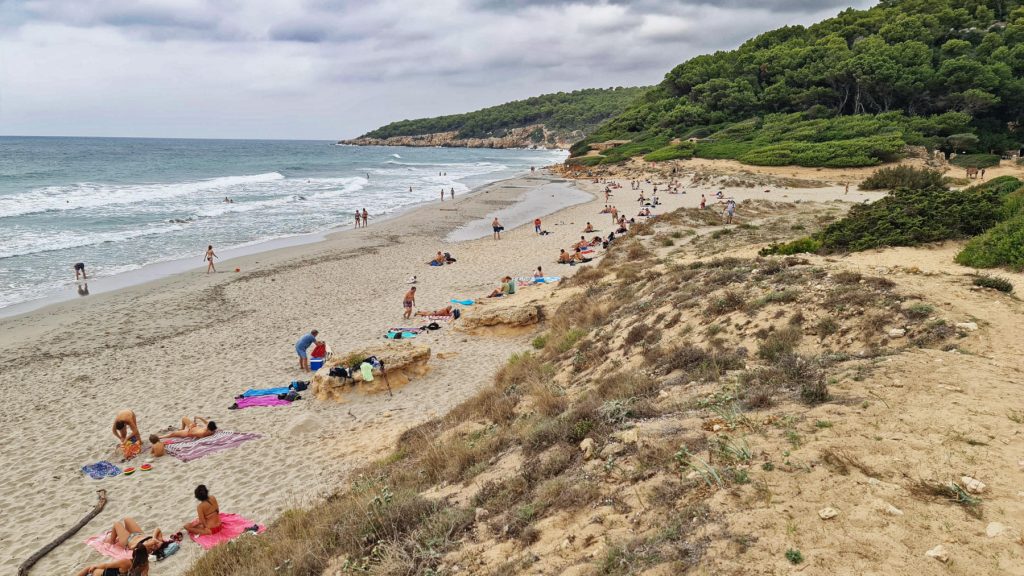 until we caught sight of the town itself. 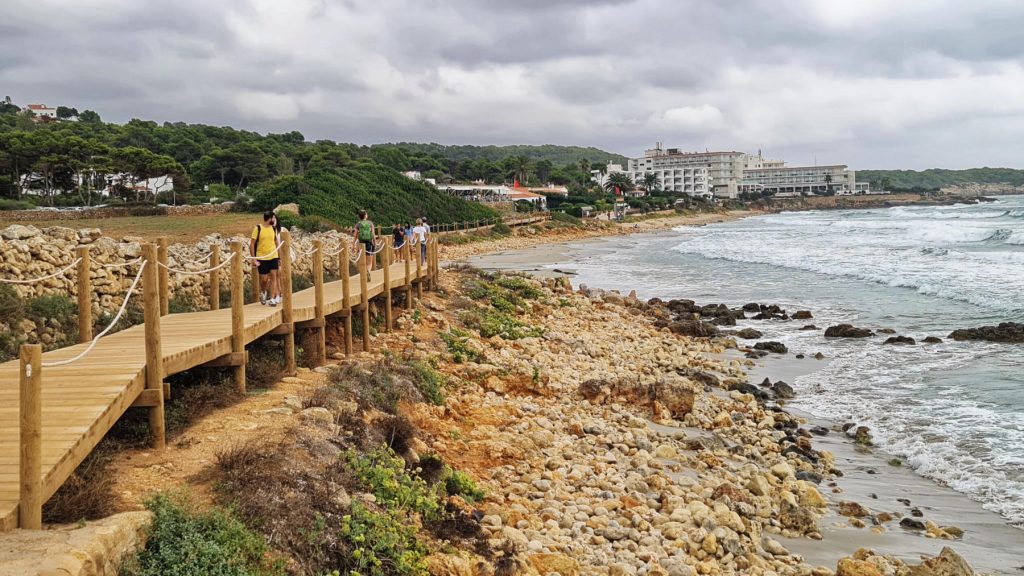 It’s very much a tourist town (like most of the towns we’ve passed on the south coast of the island). We completed the stage 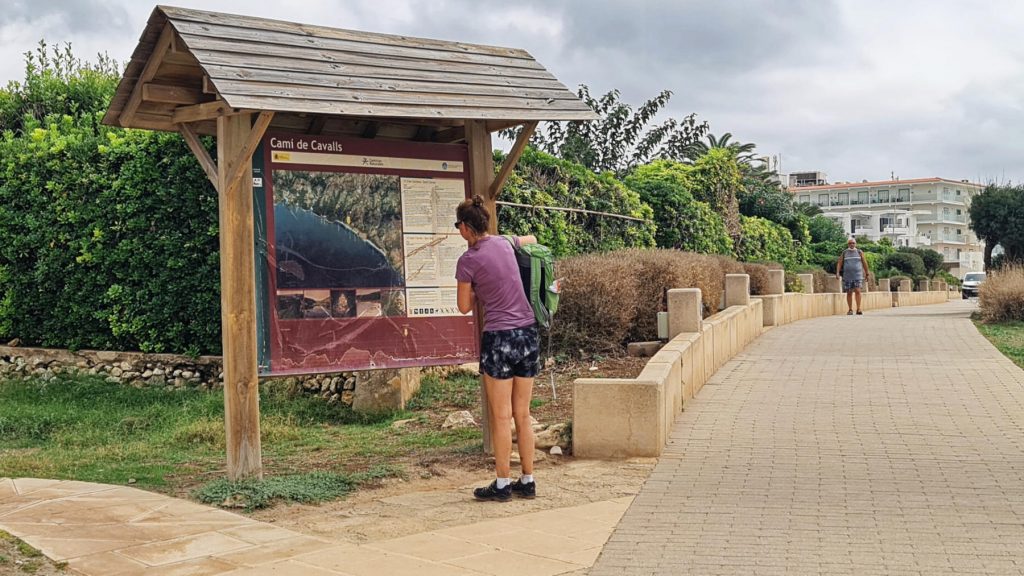 bumping into the lady pictured looking at the sign here. She was staying at the Alfons III in Ciutadella, and, like us, walked from Cala en Bosc to Cala Galdana yesterday, during which time we encountered her a few times. As we walked along today’s route at the start, we met her again, and discovered that she was due to walk a long section today. She shot off into the distance, and so it was rather a surprise to see her at Sant Tomàs, as she still had another 15km to go on the schedule she was walking to. But she’d taken a coastal trail which was flooded (we were warned about this, as was she) and so had to turn back. It was slightly strange to have met her so many times over the last few days. We hope she made it to Cala en Porter OK.

There was one slightly odd moment, soon after we arrived at our accommodation, the Hamilton Court apartments. We needed to buy some water (I don’t like doing this, but the tap water in the apartment really tasted poor) and I noticed that the apartment block has a mini shop. I went in, plonked my bottles of water on the counter and waved my phone at the lady behind the till. Unfortunately, I had come to the first place we’d come across that was cash only – very odd, as literally all other transactions we’ve done here have been contactless via the mobile phone.

The apartment we had? I can’t honestly say I was taken with it. It flattered to deceive. It was huge – larger than the apartment that I lived in for early three years in Sweden – with two bedrooms and two bathrooms, and even its own little garden outside. But there were sufficient drawbacks to make the experience of staying here less than satisfactory: a spectacularly ill-designed main bathroom, large, but with nowhere to put stuff like wash bags; a complete absence of soap or detergent (we had soap with us but this doesn’t help much with the washing up); an uncomfortable bed; and uncomfortable chairs in the lounge. A shame, really; I was glad we had only the one night there.

The rest of the day fell into a familiar pattern:

Jane had identified a nearby restaurant, Es Pins, which seemed to offer the sort of lunch we were after and so we went there. It was a lively place – a nice atmosphere, if a bit clattery for my taste, and with an open terrace overlooking the sea. We had a good meal, but made a tactical error in our choice of both starter and main course. My main course was lamb done Menorcan style and it is only because of my religion that I’m not sharing a photo of it with you; it looked like a whole shoulder of lamb. With mangetout. And potatoes. It was delicious. But vast! Jane had sea bass done Menorcan style and that was a generous portion, too – but again delicious.

So we’re basically stuffed to the gills; at the moment, I’m not sure I’ll need feeding at all tomorrow.

Before I talk about tomorrow, let me give you some stats for the day:

And so to tomorrow. We are due to cover two stages as we walk from here to Cala en Porter, a distance, as I say, of about 15km. Our destination is a hotel as opposed to an apartment, and I discover that it’s a medieval castle built in 1971, which doesn’t have its own website; on Google Maps it’s described as a one-star hotel; another website I found describes it as a 5-star hotel. It has a bar and air conditioning; those at least will be very welcoming, whatever the other surroundings are like. You’ll just have to come back and find out, won’t you?