Monday 28th June 2021, evening. We spent some three and a half hours acquainting ourselves with our hotel room whilst we anxiously awaited the outcome of our Covid tests.  In the distance, we could hear the tinkling of a piano.  Well, it as more a crashing than a tinkling.  I wondered if it was someone practising, Jane thought it was just rubbish. But it gave us something to get slightly distracted by whilst we waited……

At 8pm, the all-clear came in the rather prosaic and anti-climactic form of an SMS text saying “Screening could not detect COVID-19”.  No fanfare, no chorus of angels, just the beep of an incoming message.  But good news, nonetheless, as we were both getting a bit sharp set.

So we decided it was time to go out and explore our surroundings somewhat, not least because, against all odds, the sun was shining – not something we felt we had any right to expect.  We took an interim stop in the hotel bar, which was useful in several respects: firstly, getting to know Viking beer, a decent local lager; secondly getting a steer from the barman as to somewhere to eat (see later); and thirdly, to meet, briefly, Chris Foster, a friend of Jane’s from her folk-singing days. I would say “dim and distant” but if she reads that, she’ll slap me. The cost of spirits being what it is in parts Nordic, we’d brought a decent scotch and thus were able to present it to him.  We plan to meet him again when we return to Reykjavik en route home.

The Sand Hotel is set in Laugavegur, one of Reykjavik’s centralised, largely pedestrianised, streets, and very charming it is, too.  You can see at a stroke the quirky nature of this street, as well as the ubiquity of the electric scooters which make life as a pedestrian more tense than is strictly necessary. 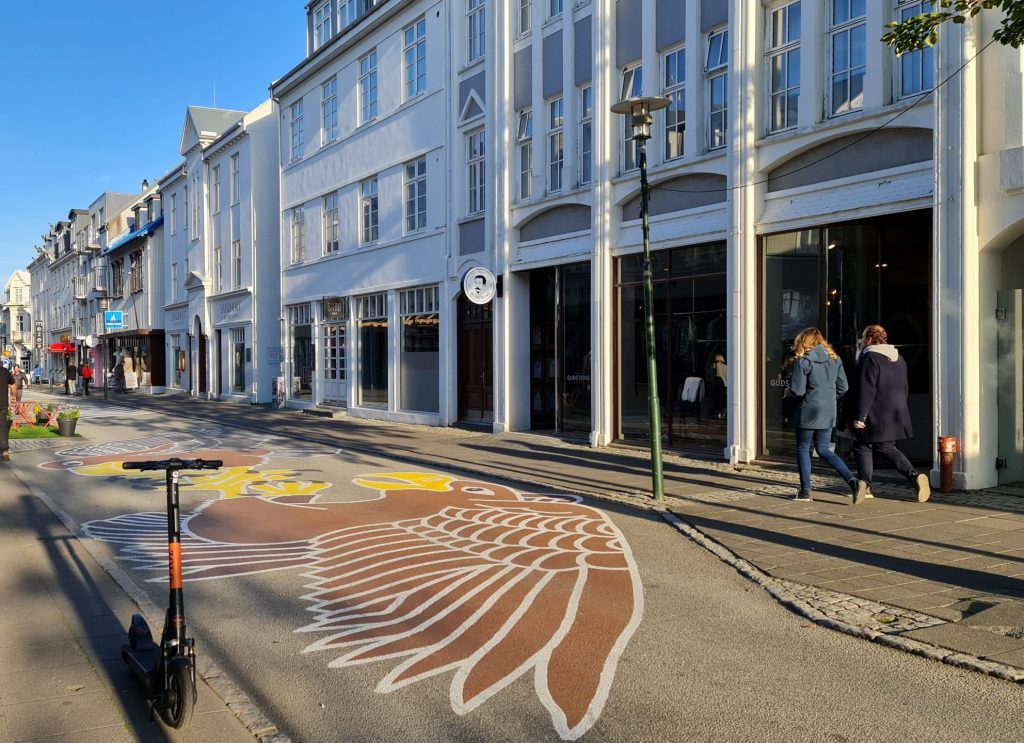 As I took this photo, it became clear where the piano “music” was coming from. Up the street was a piano player who had extraordinary technique but could only muster appalling results.

We pottered in the direction that the barman said contained a good burger bar, noting the artworks adorning many of the street’s buildings 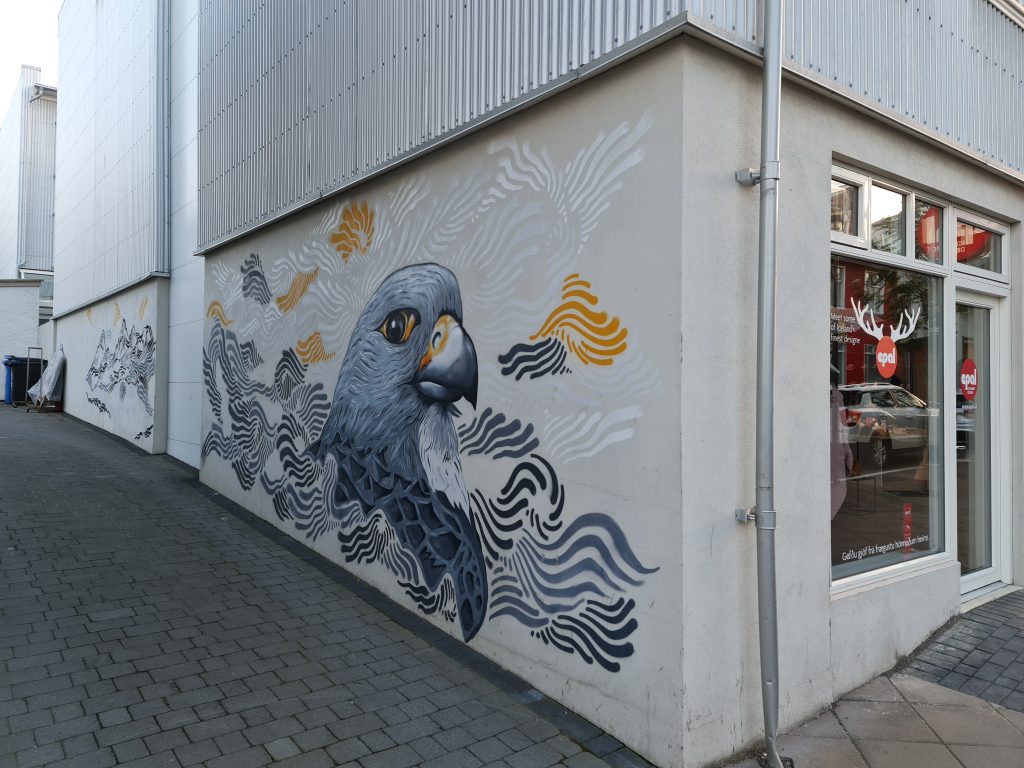 and spotting, in the distance, the hint of an impressive spire. 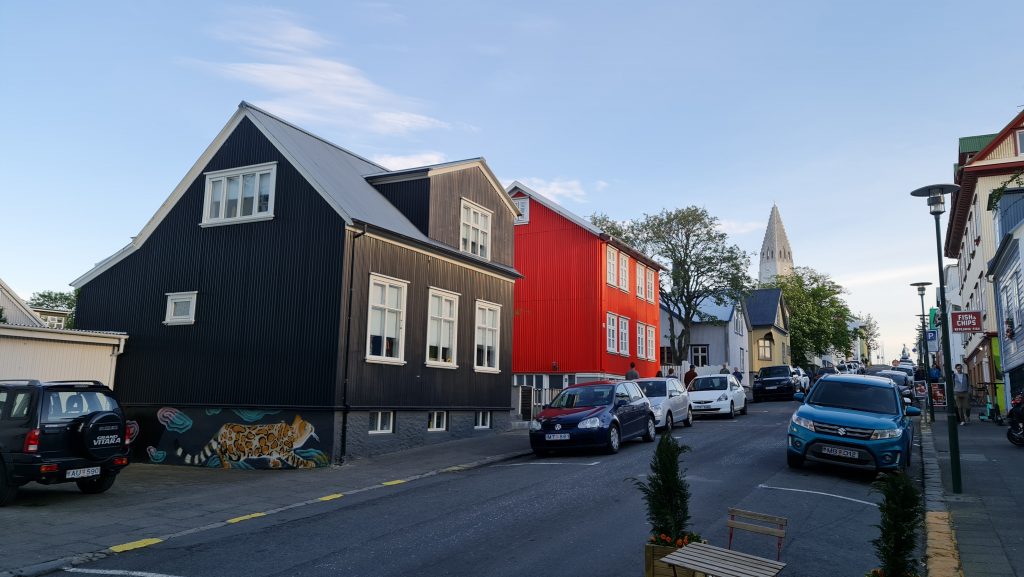 We eventually found the burger joint that our barman recommended 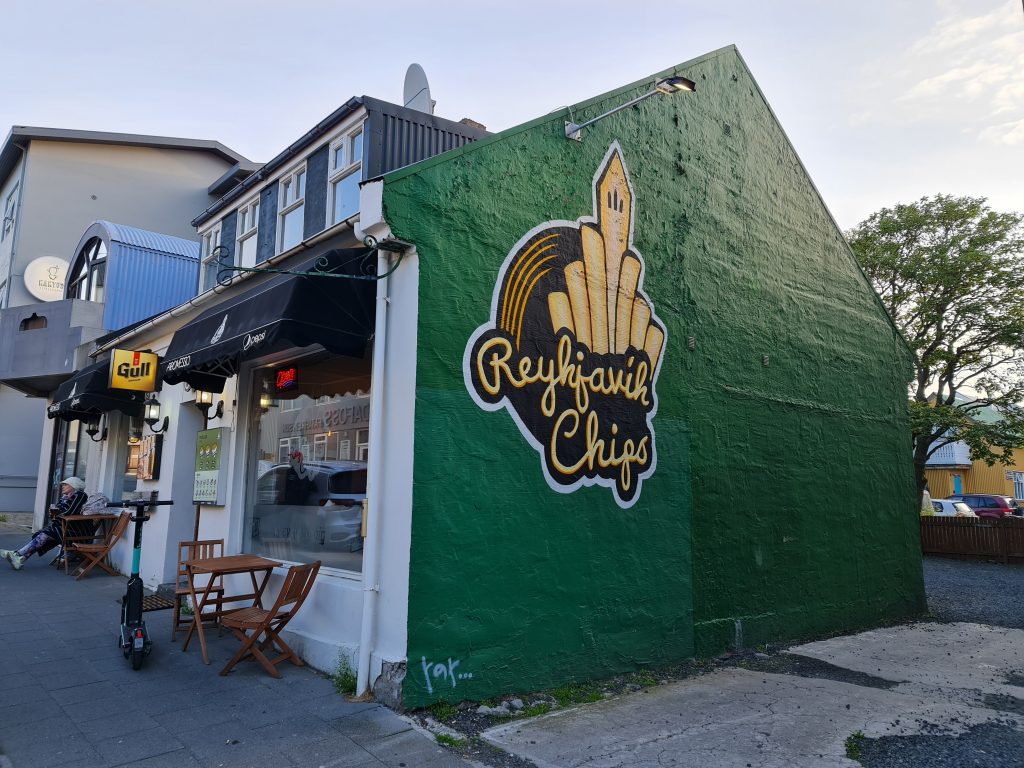 and it’s entirely in keeping with the quirky nature of the neighbourhood.  The burgers are OK, but the chips are stellar!  Walking back to the hotel, we detoured to explore the spire, and found it belonged to a quite remarkable building. 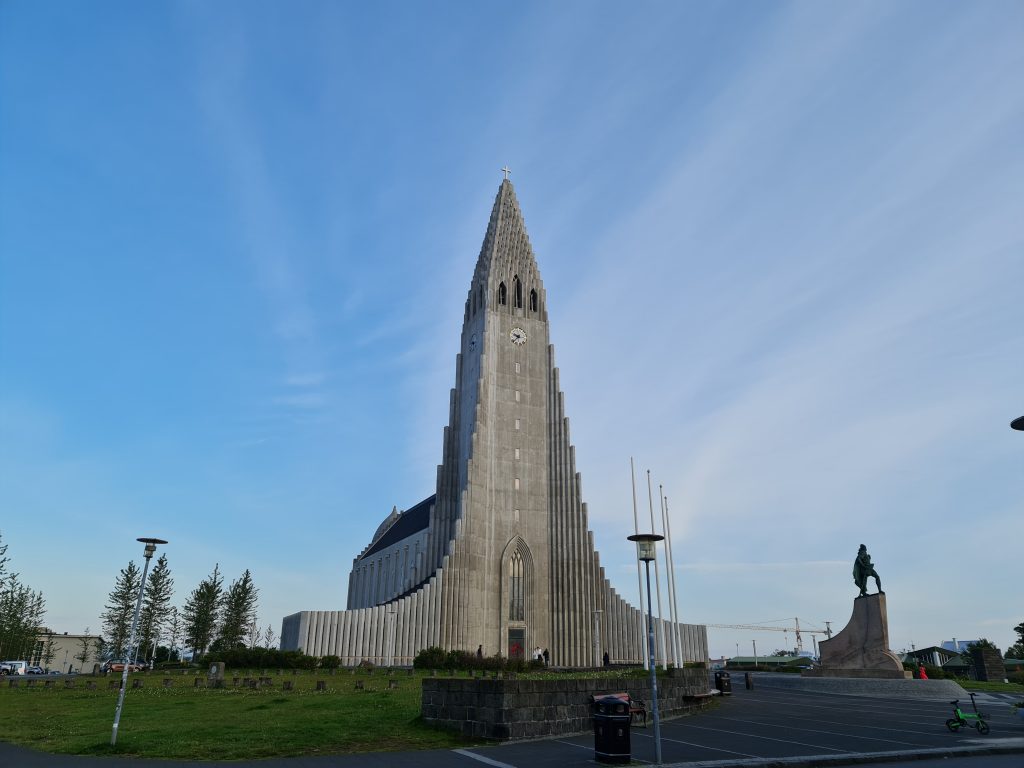 It’s called Hallgrímskirkja, locally referred to as the “Space Shuttle” and can be visited during the day; perhaps we will get a chance to look inside on our return to the city.

By this stage, it was getting a bit late and cool, so we wended our weary way back to the hotel and so to bed.  The day was a disconcerting mix of strange and familiar, and we felt the need of getting some sleep to help us be ready for whatever tomorrow might bring, and who knows what that might be?  Come back and find out!