Wednesday 25 May 2022 – With the dawning of the day (always welcome at Feynan, as it means you can see where you’re going for a change) came the dawning of two realisations: 1) my digestive system, although less disruptive than 24 hours earlier, was still mutinous; 2) I was now developing a more ubiquitous crop of mouth ulcers than ever I had experienced in a youth dogged by the buggers.  The obvious suspect was the suspect herbs from the avuncular Arab yesterday.  They say don’t look a gift horse in the mouth, but when the horse is an Arab, perhaps I should exercise more caution.

I was at least feeling well enough to wander round Feynan Ecolodge and take some photos, because it’s a striking place. 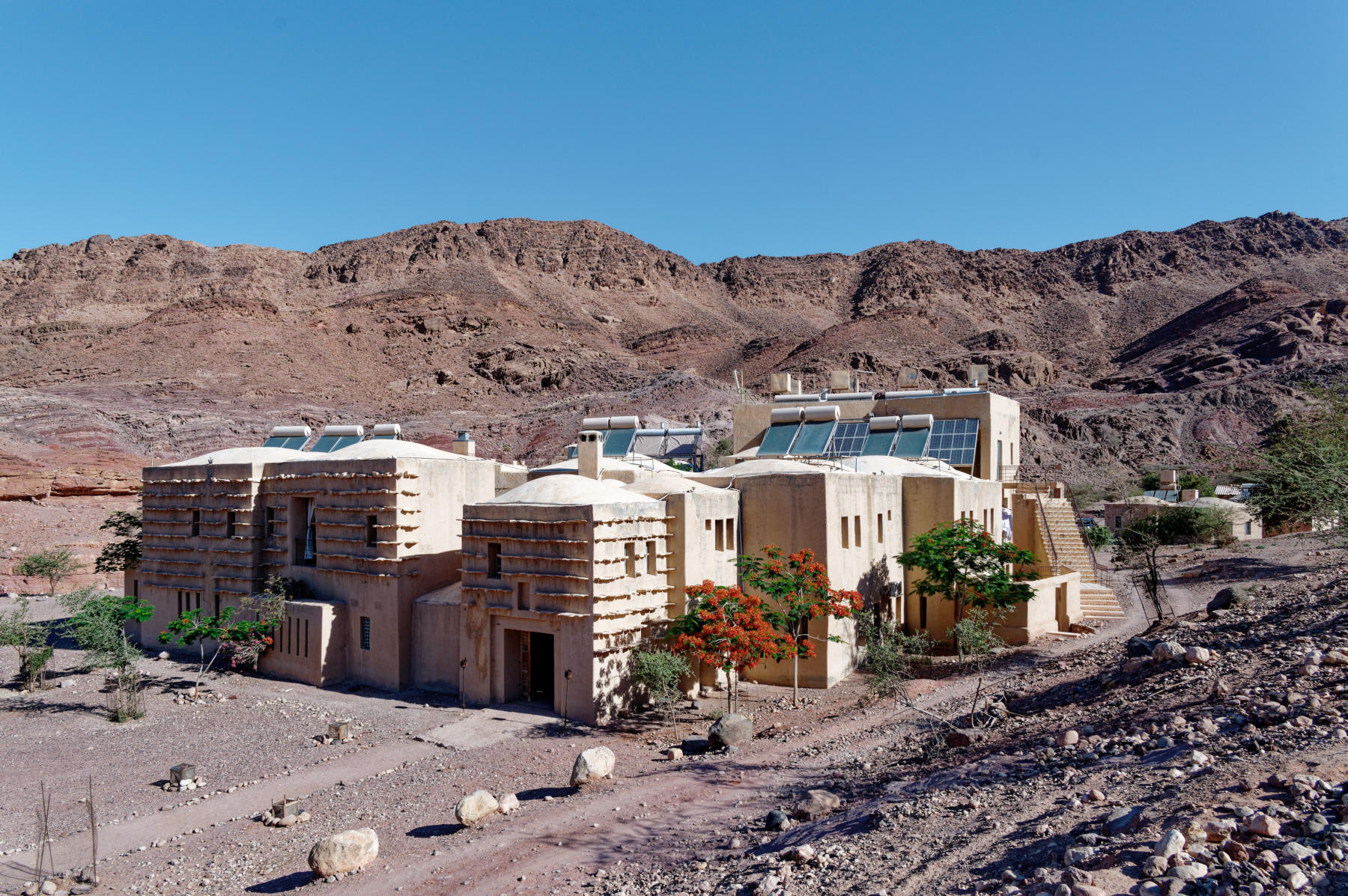 It’s part (the jewel in the crown, I think) of the Ecohotels portfolio. “EcoHotels is a privately owned Jordanian company that provides escapes embedded in beautiful natural areas, with a rich local culture, and offering unique memorable experiences” goes their website. Well, it was being fucking memorable as far as I was concerned, that’s for sure.

Cheap shots aside, it’s a remarkable place and a good example of something that eco-tourists will find a rewarding place to visit, as it’s a great base for hiking as well as learning to knit your own yoghurt and other sustainable pursuits.  It’s undeniably photogenic in the morning sunlight. 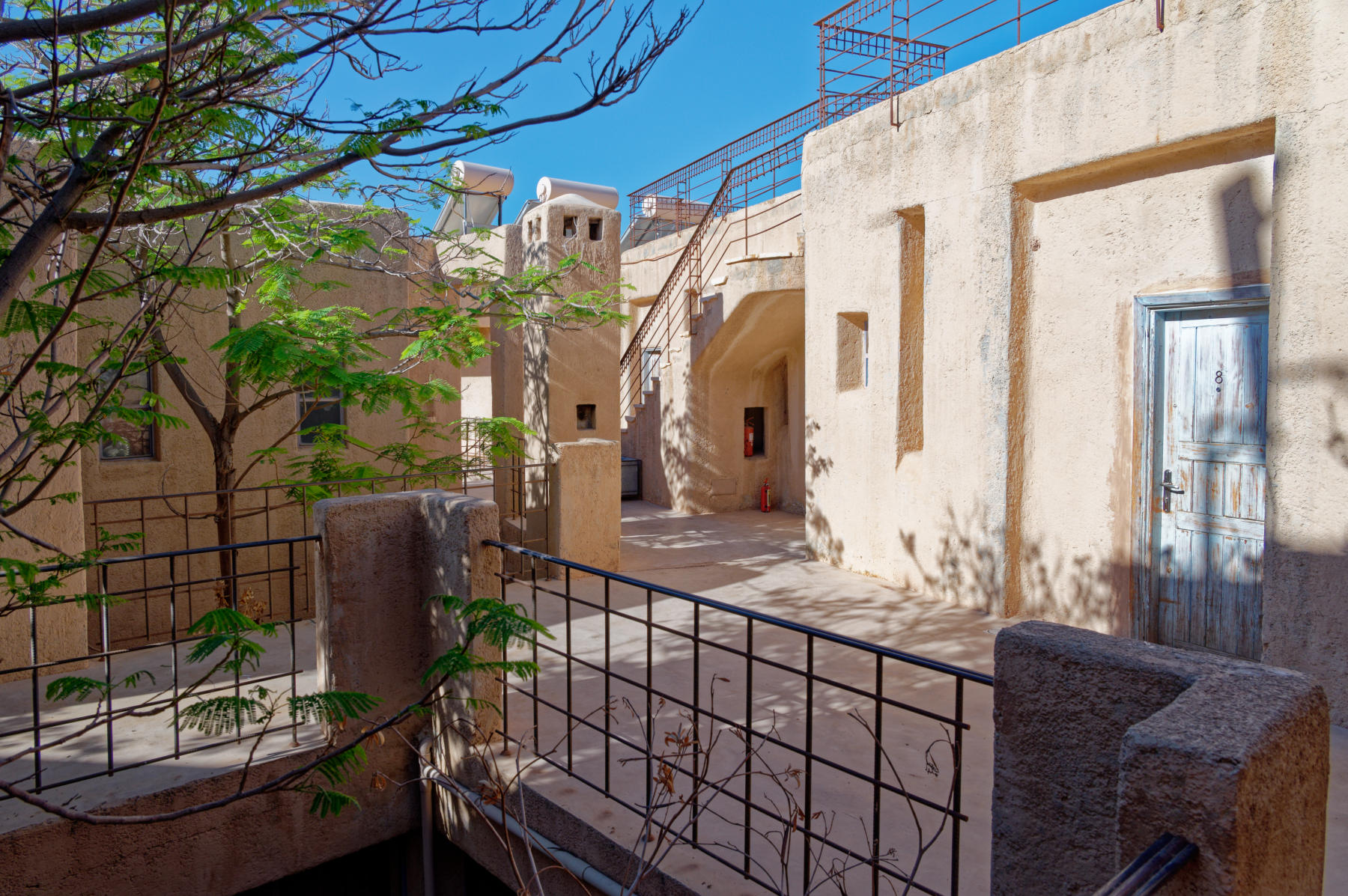 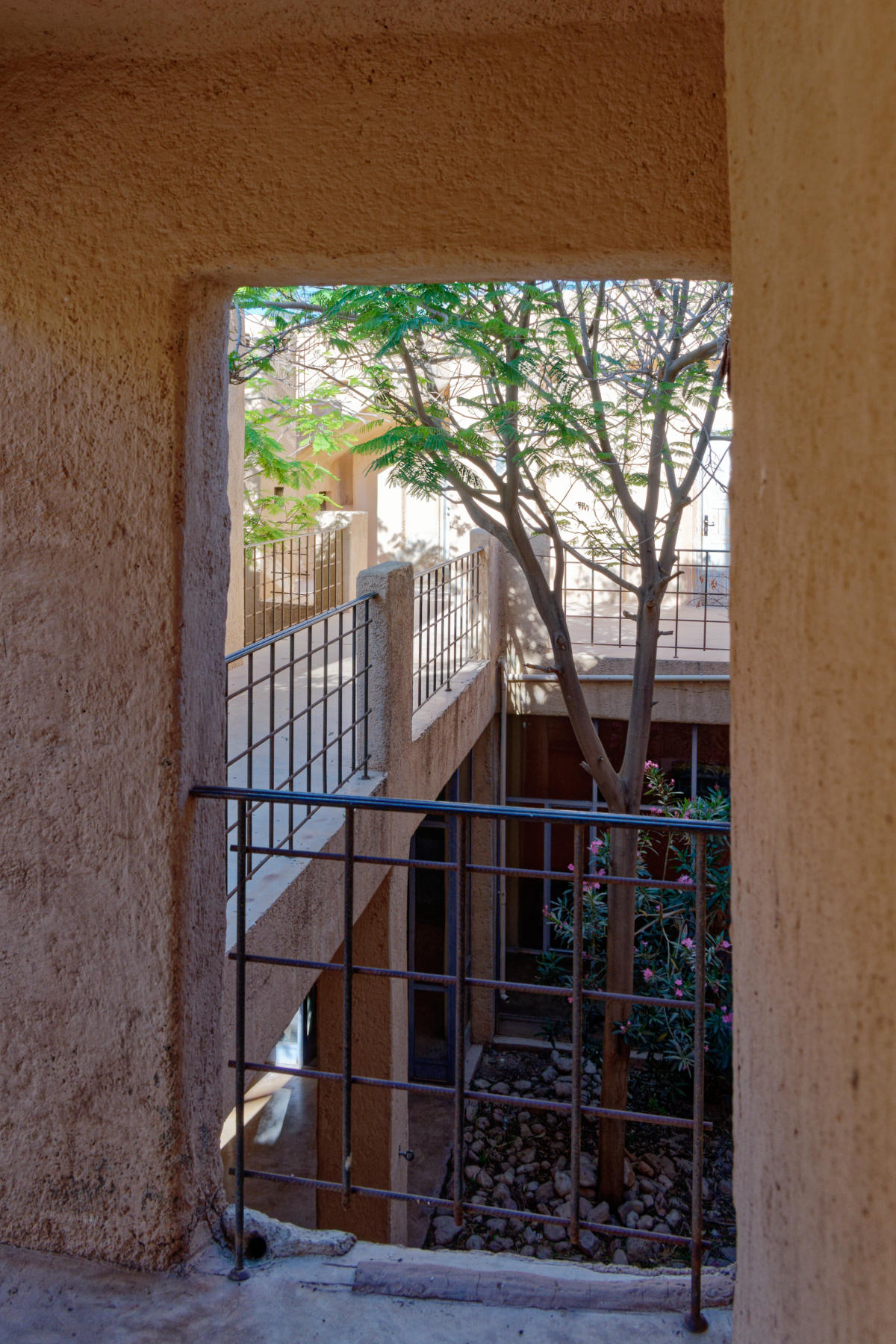 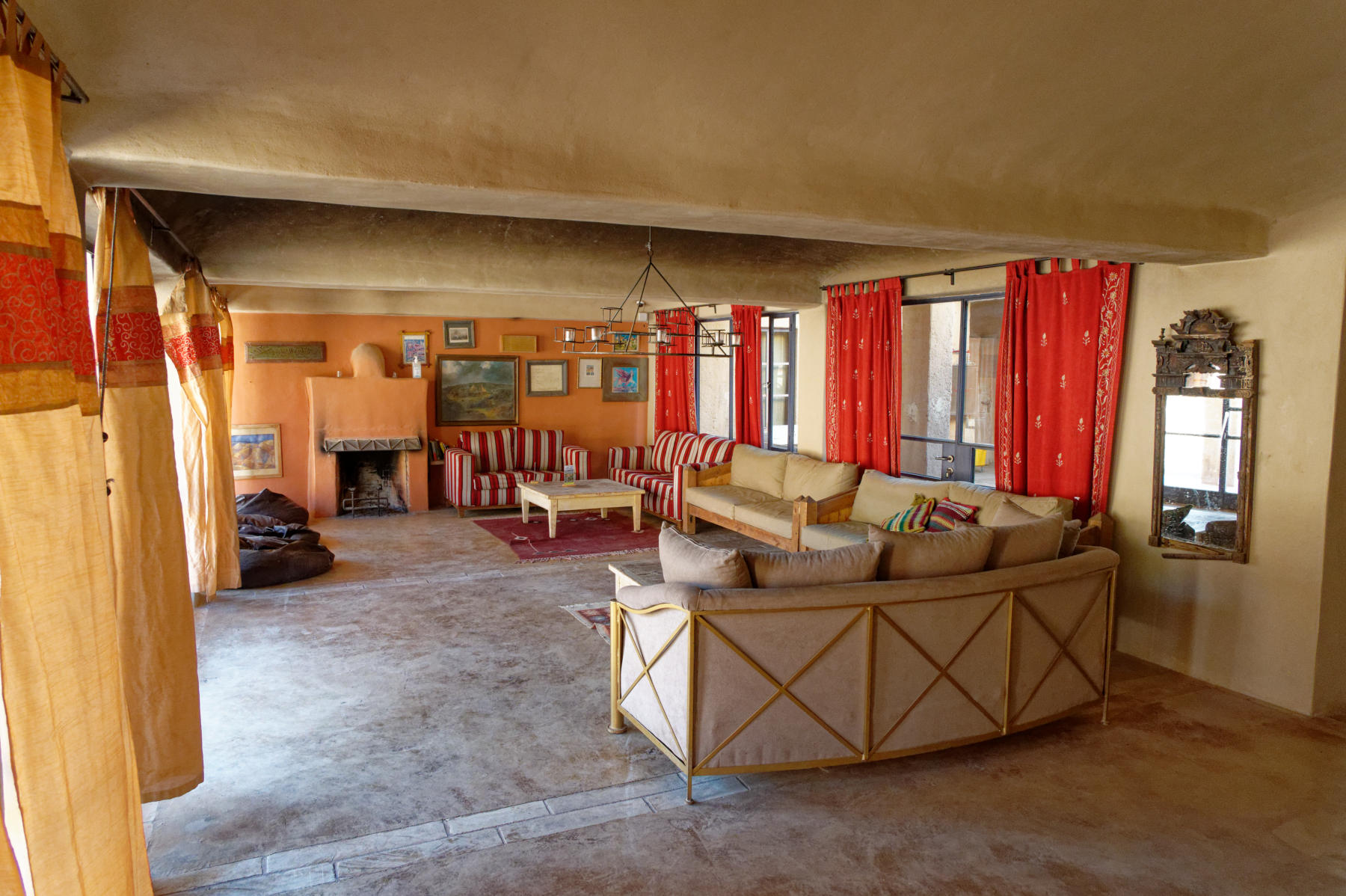 they take their sustainability seriously 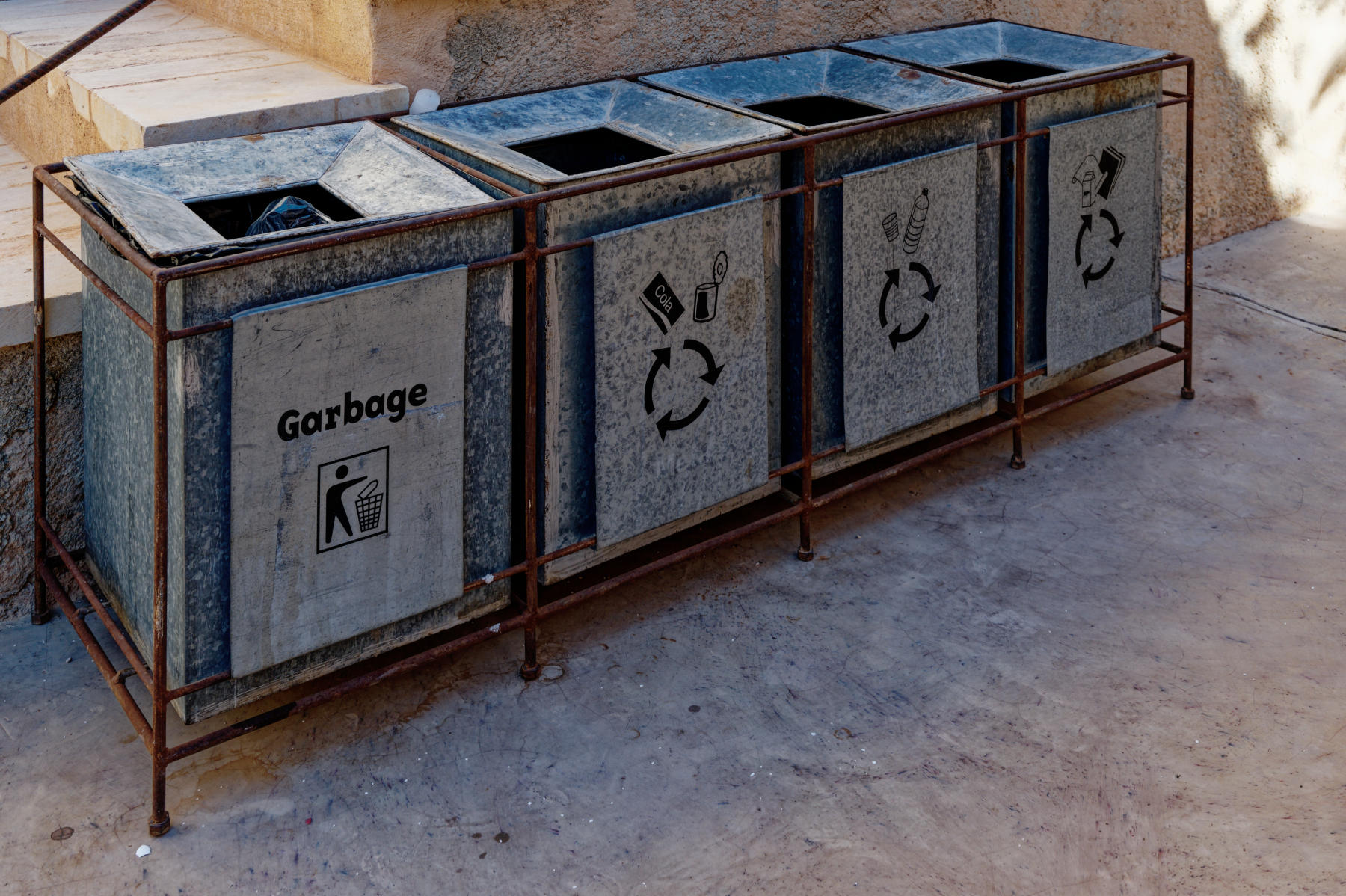 and there appears to be scope for activities which betray a tenuous grip on sanity. 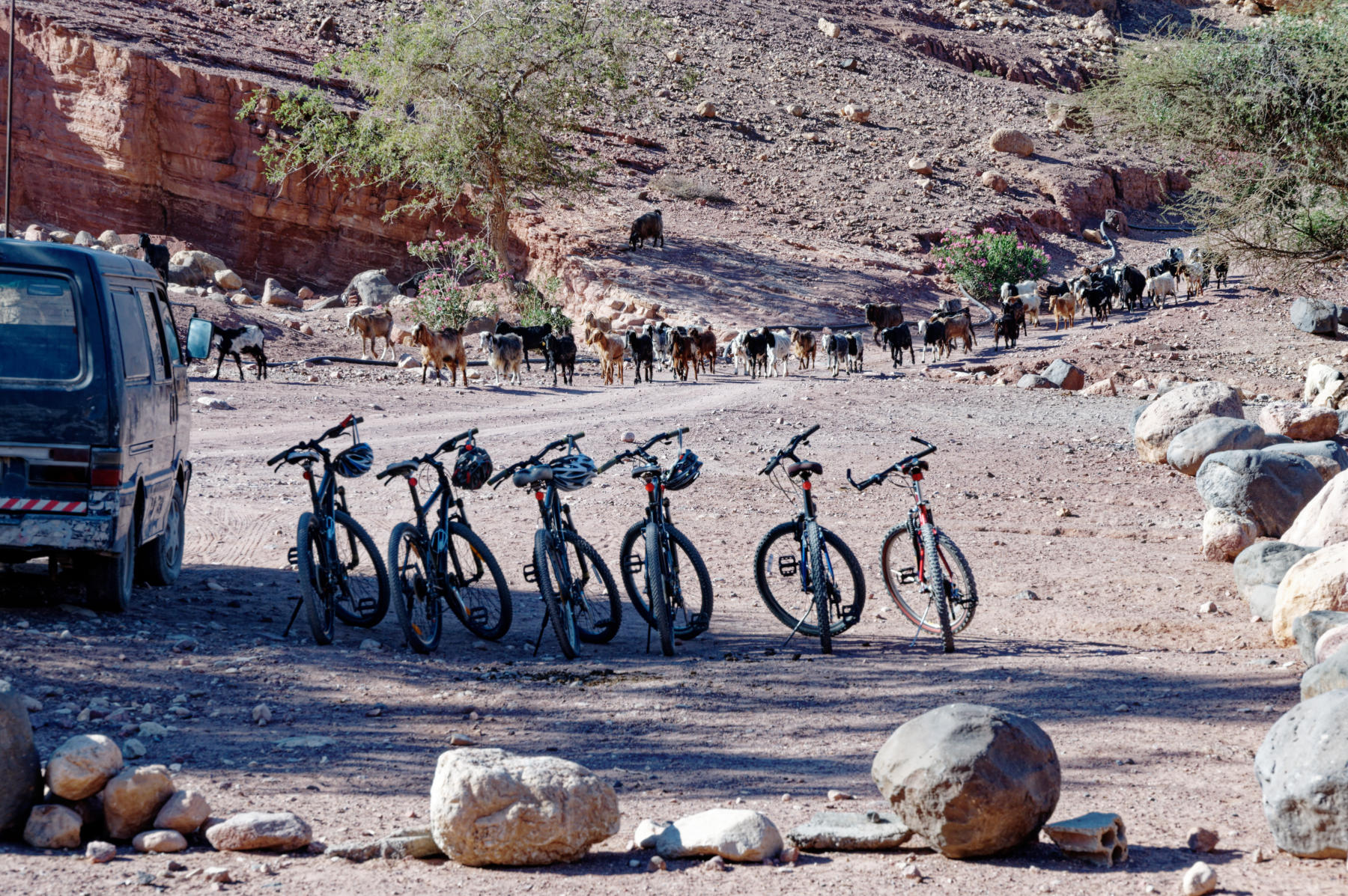 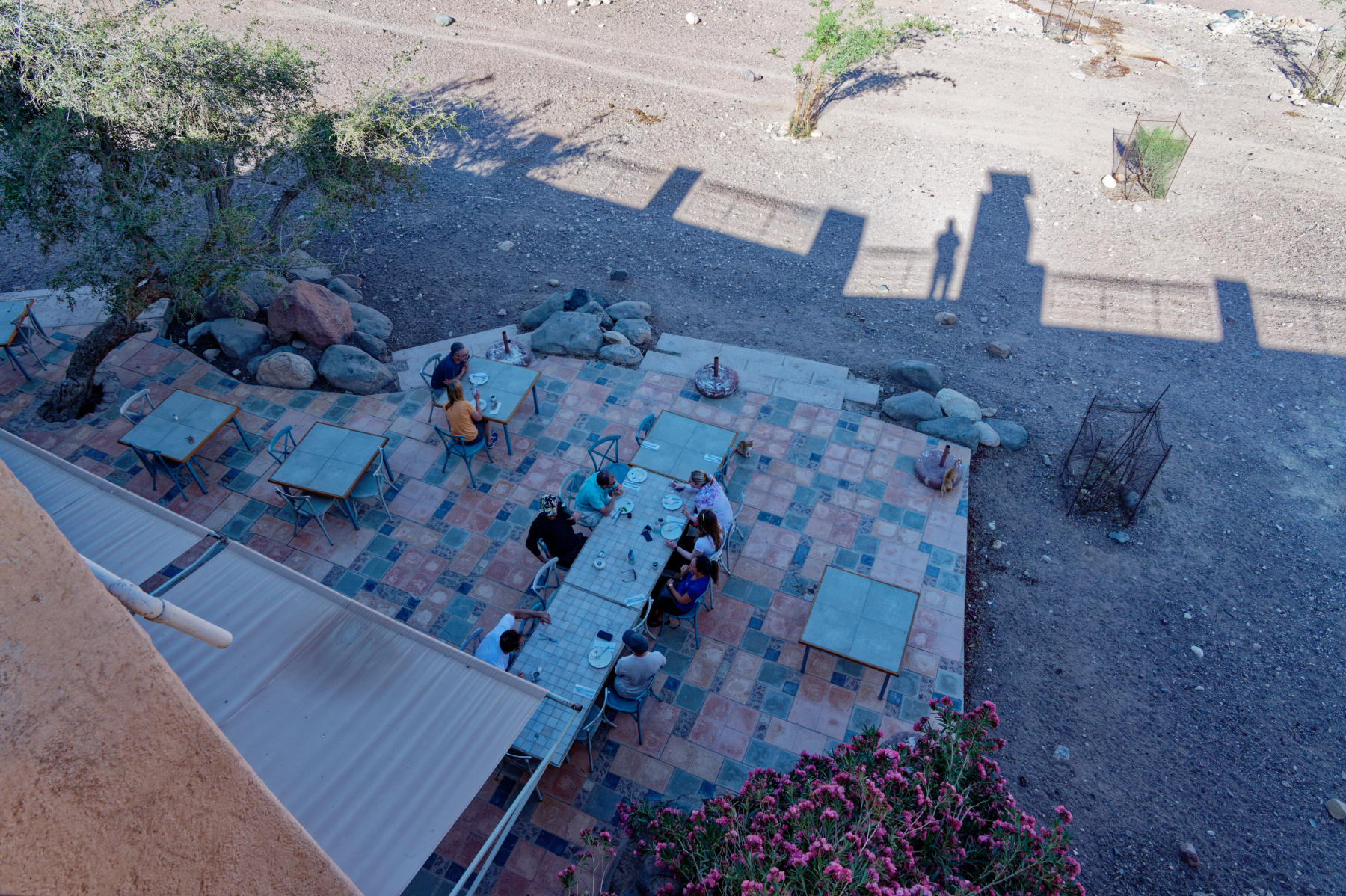 and there are quirky touches, both planned 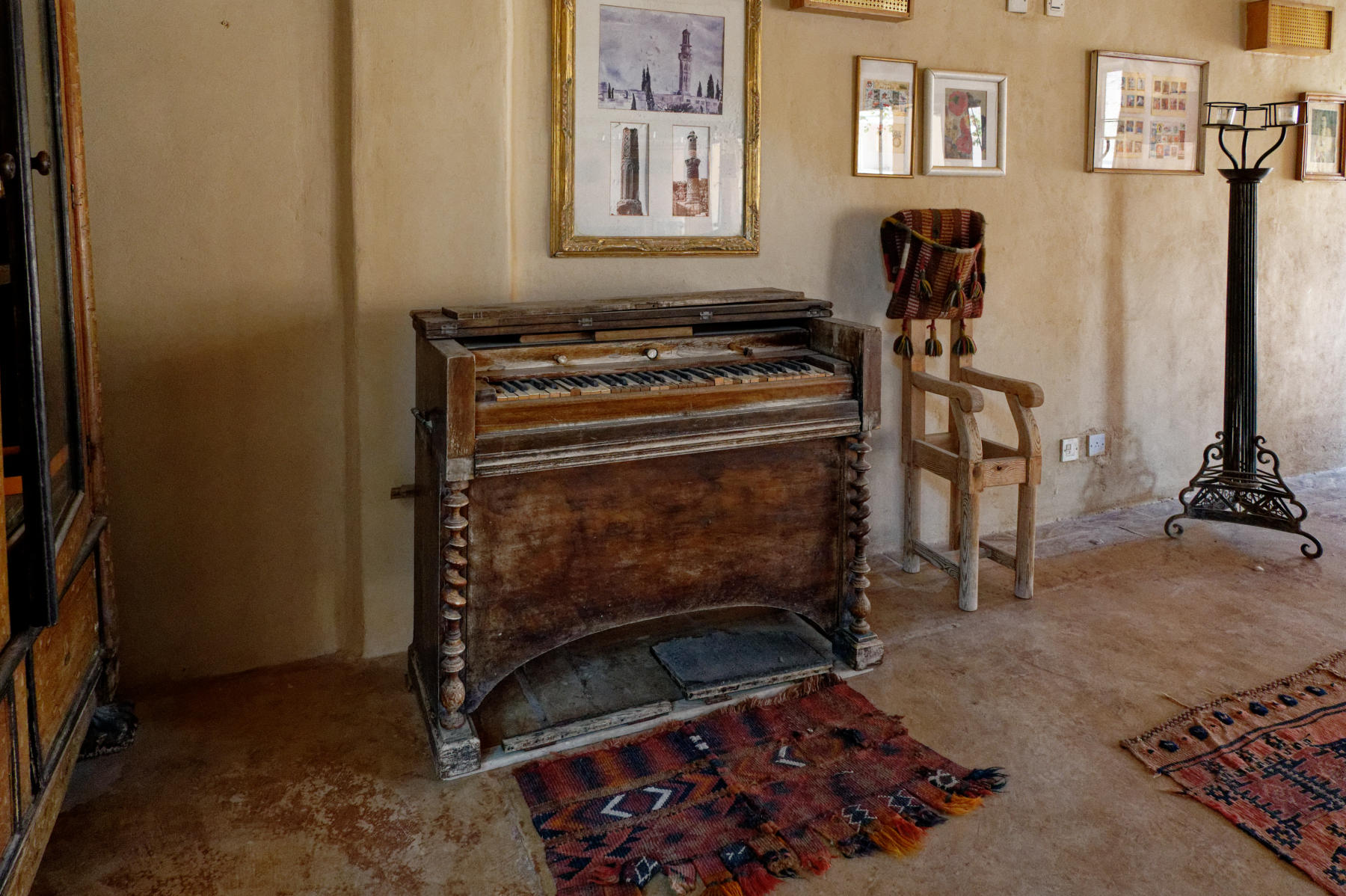 and not so much. 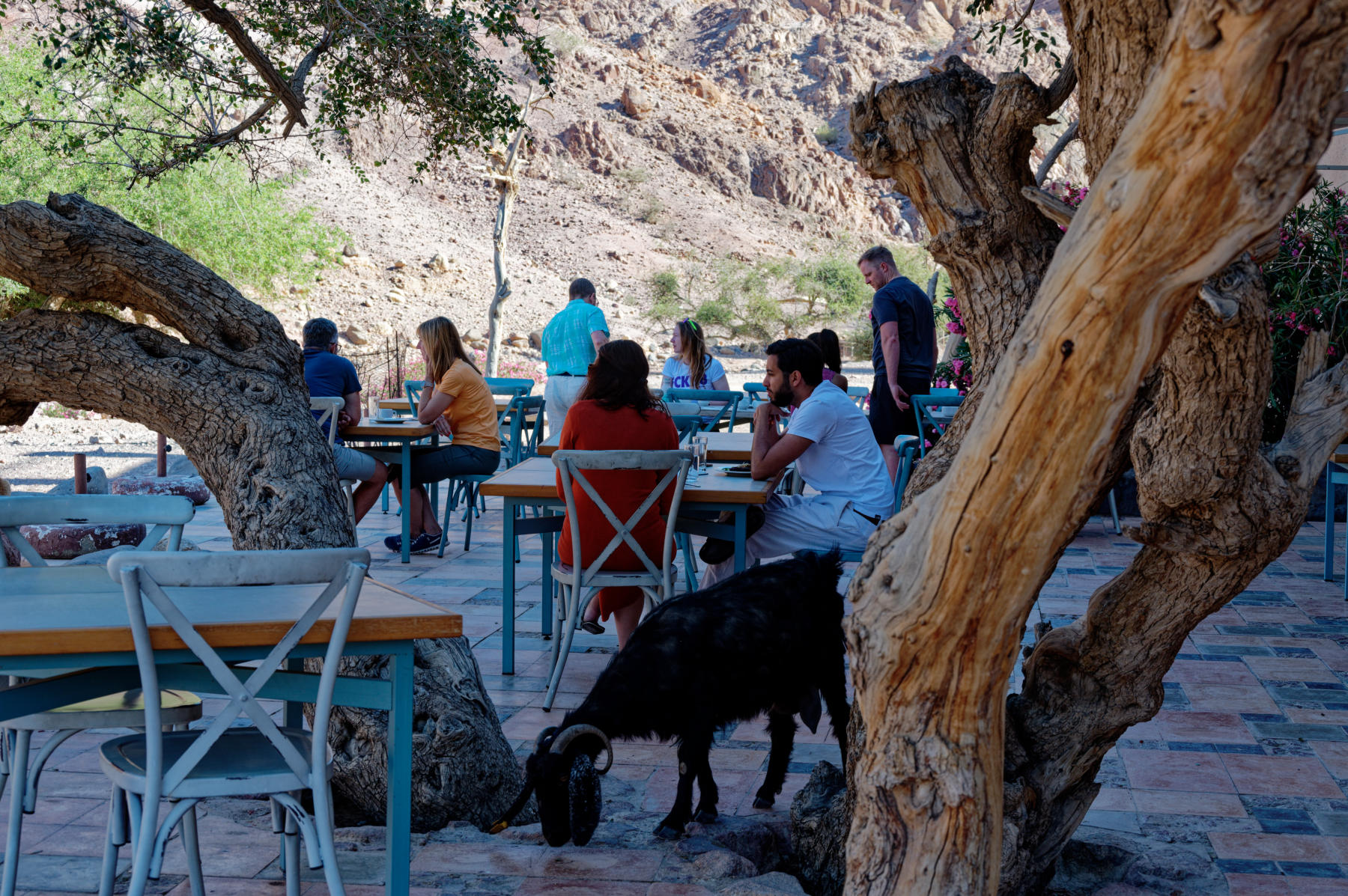 There’s also scope for some arty photos, which, of course, I couldn’t resist. 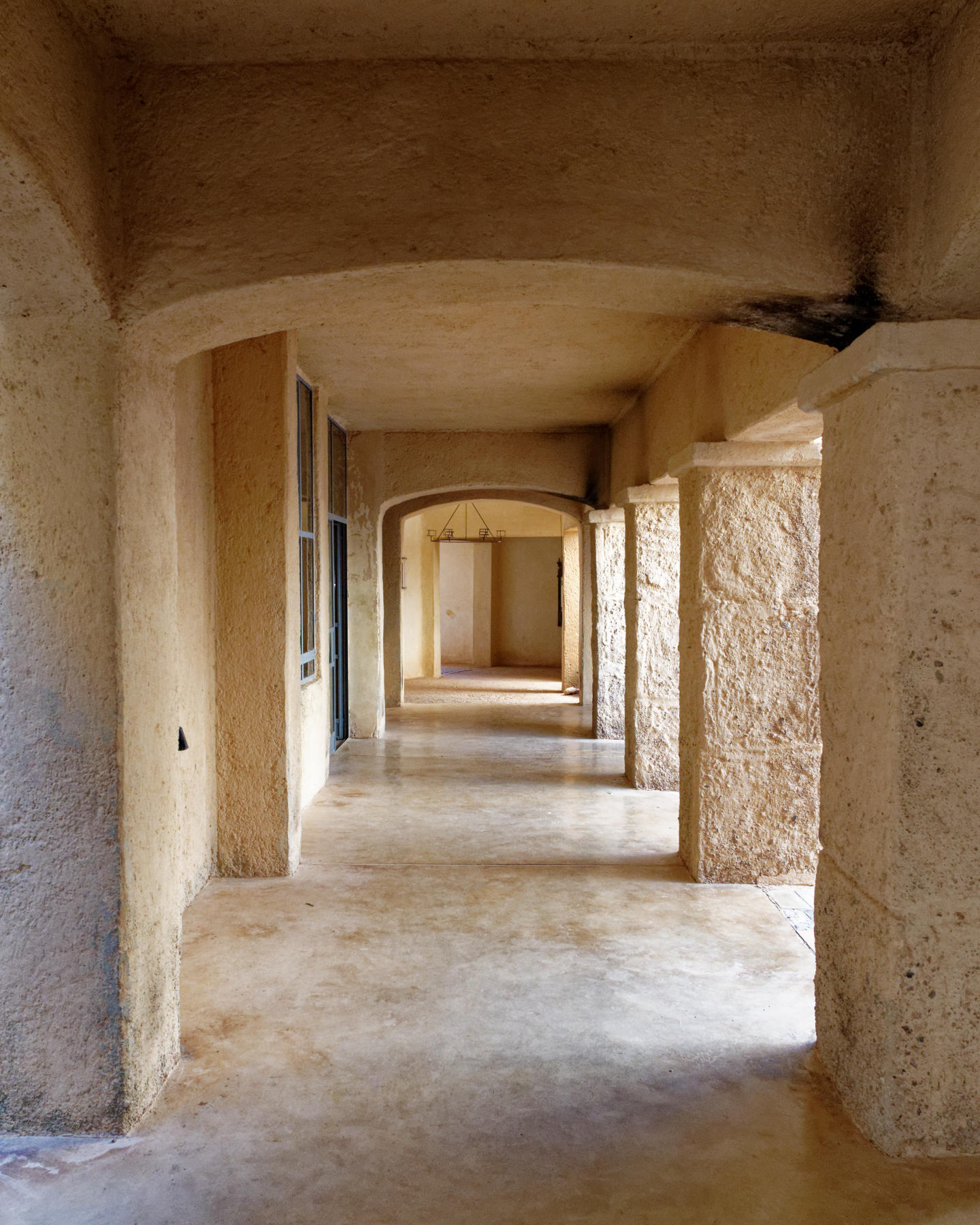 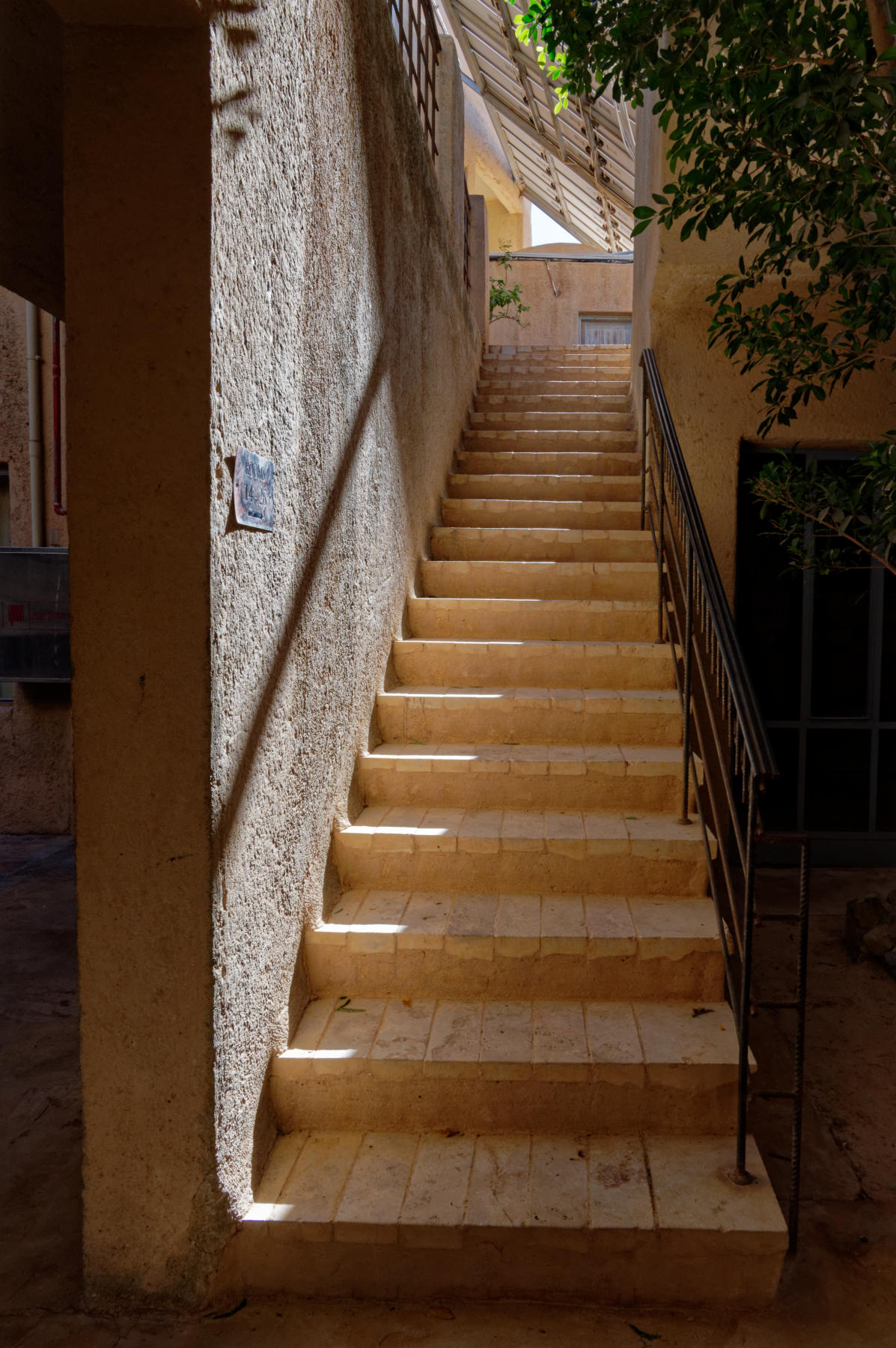 Breakfast and packing done, it was time to bumpety-bump our way, despite a desert traffic jam, 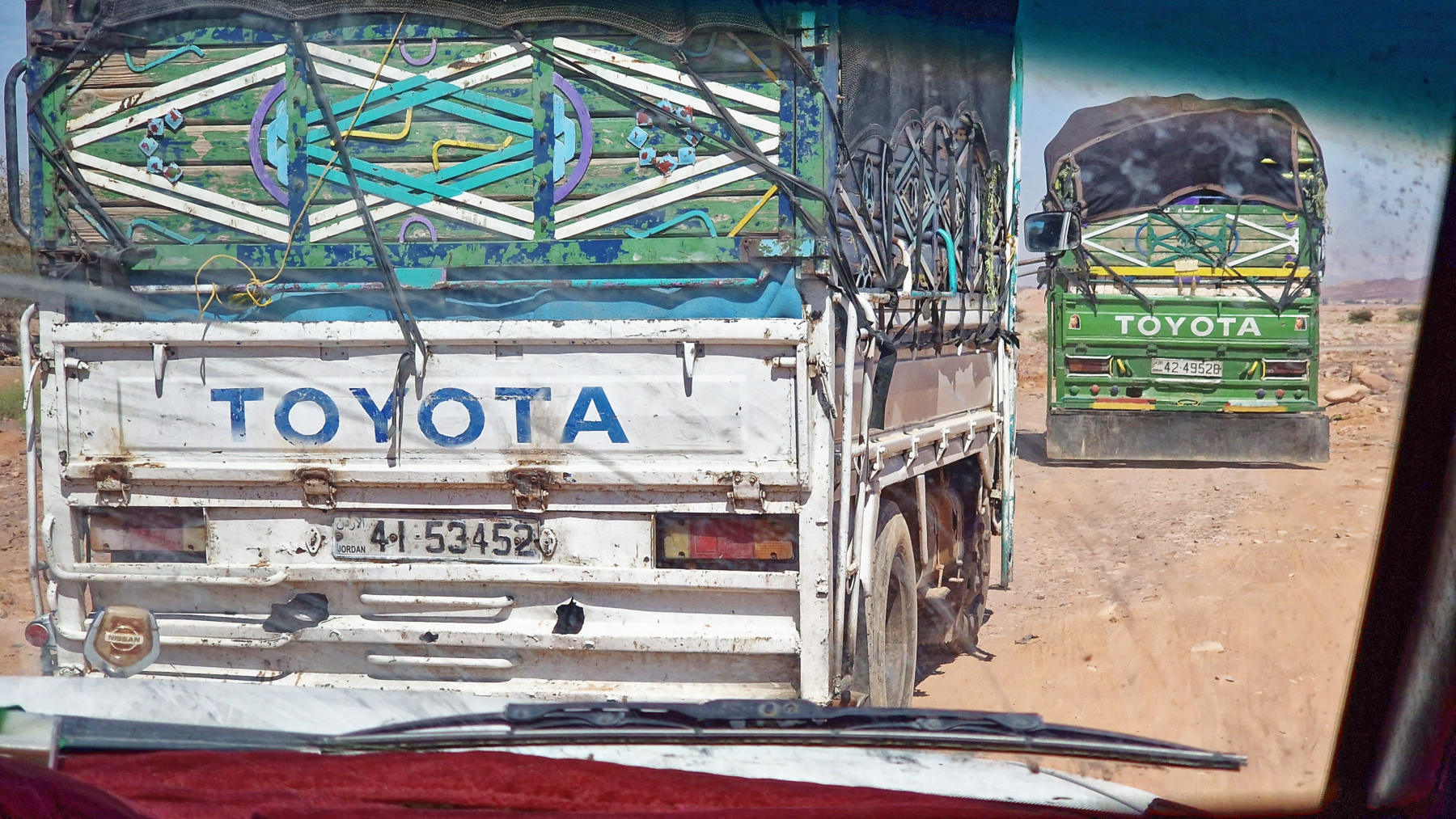 to reception to meet Saeed to take us on our way to our next and, airport excepted, final destination; the Kempinski Ishtar hotel by the Dead Sea.  En route, he found us a pharmacy which was able to supply us with some Imodium, as I had, erm, run through our original stock.

We passed a few scenes of note, such as this crop of mulukhiyah, or jute’s mallow. 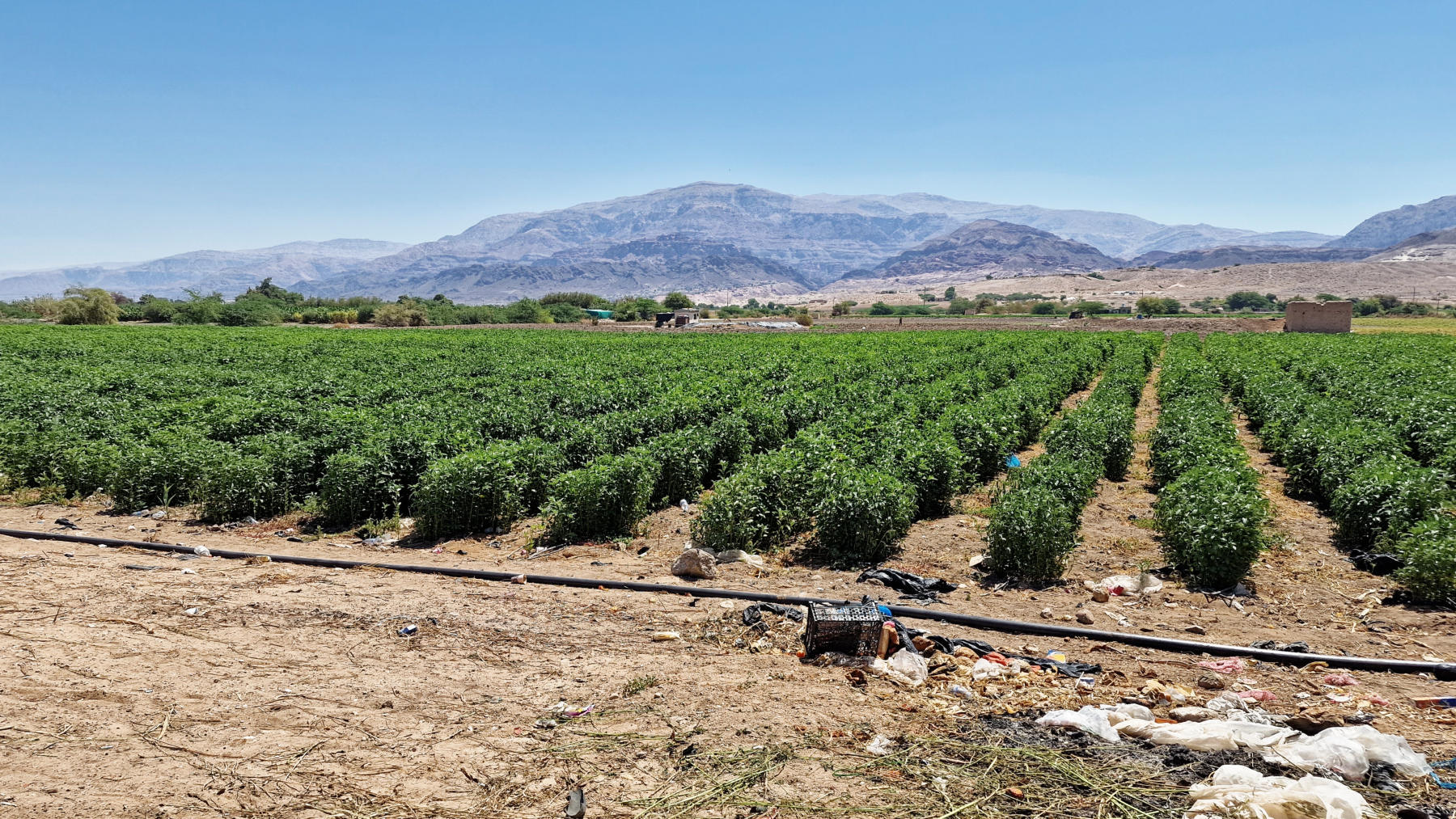 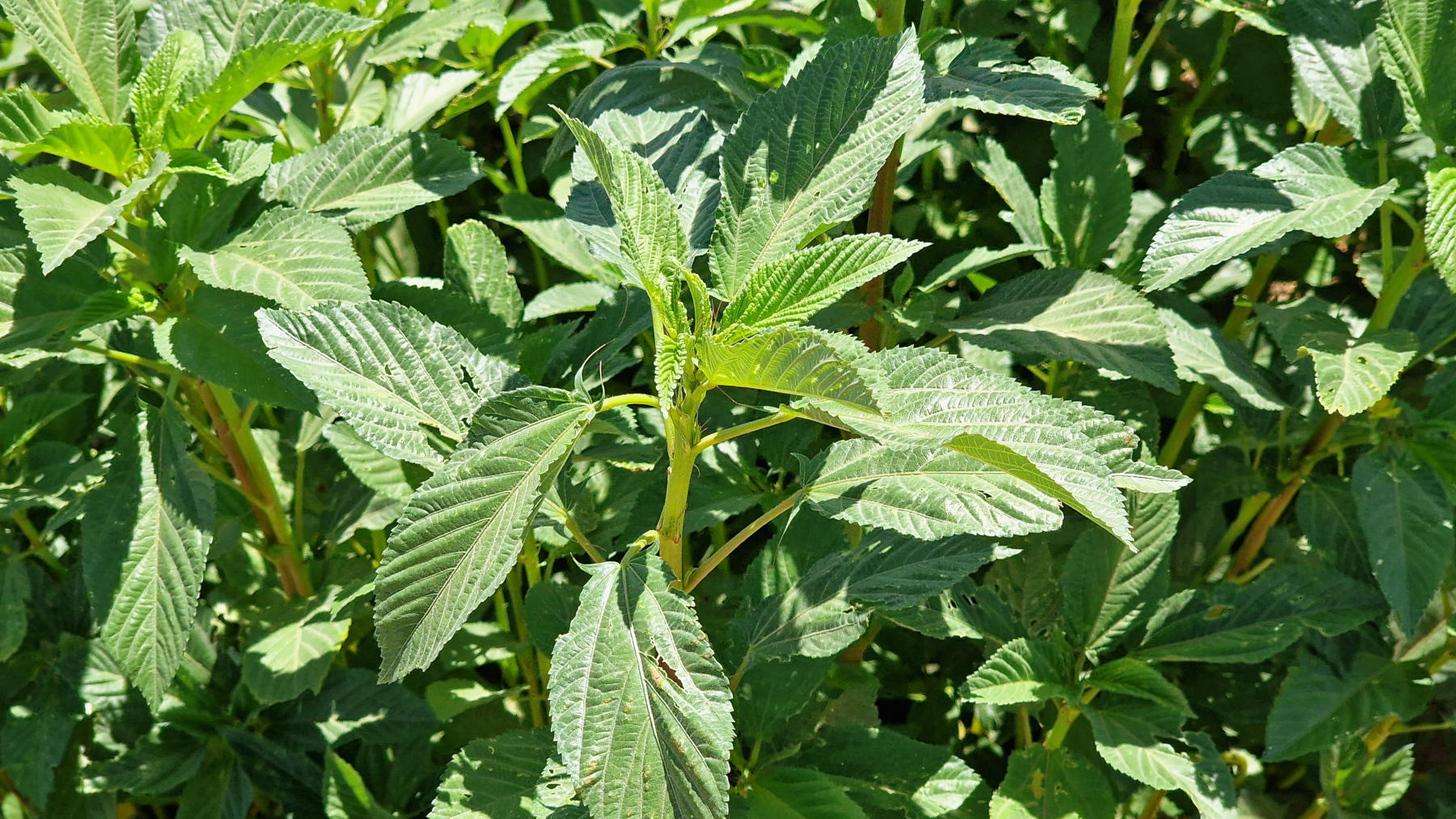 (whose name originates from mulukia, meaning food for royalty) which apparently cooks up well in a not dissimilar fashion (I’m told) to okra. Saeed obviously esteems (!) it – he bought 10 kilos of the freshly cut vegetable to take home to his family and neighbours… 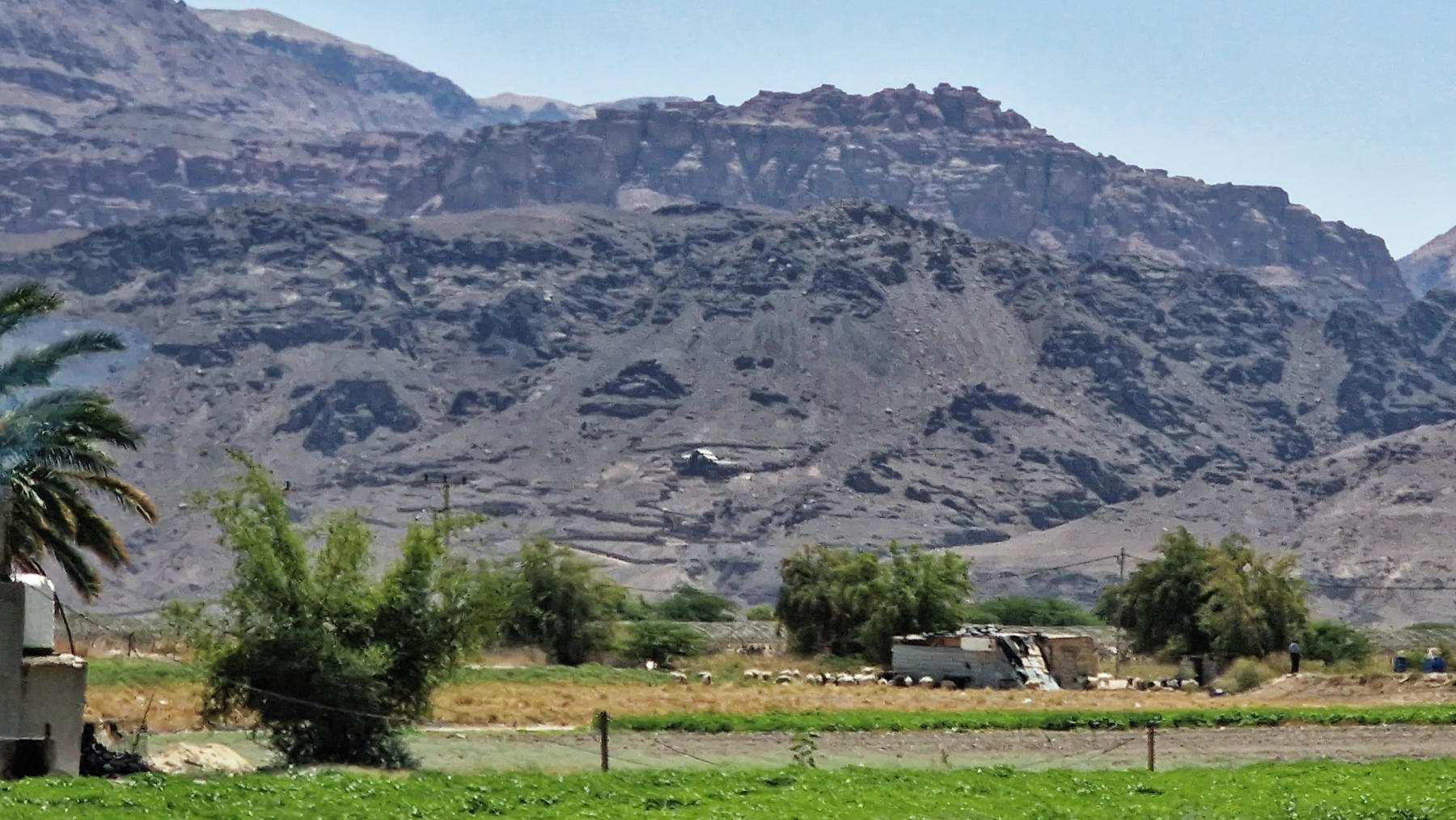 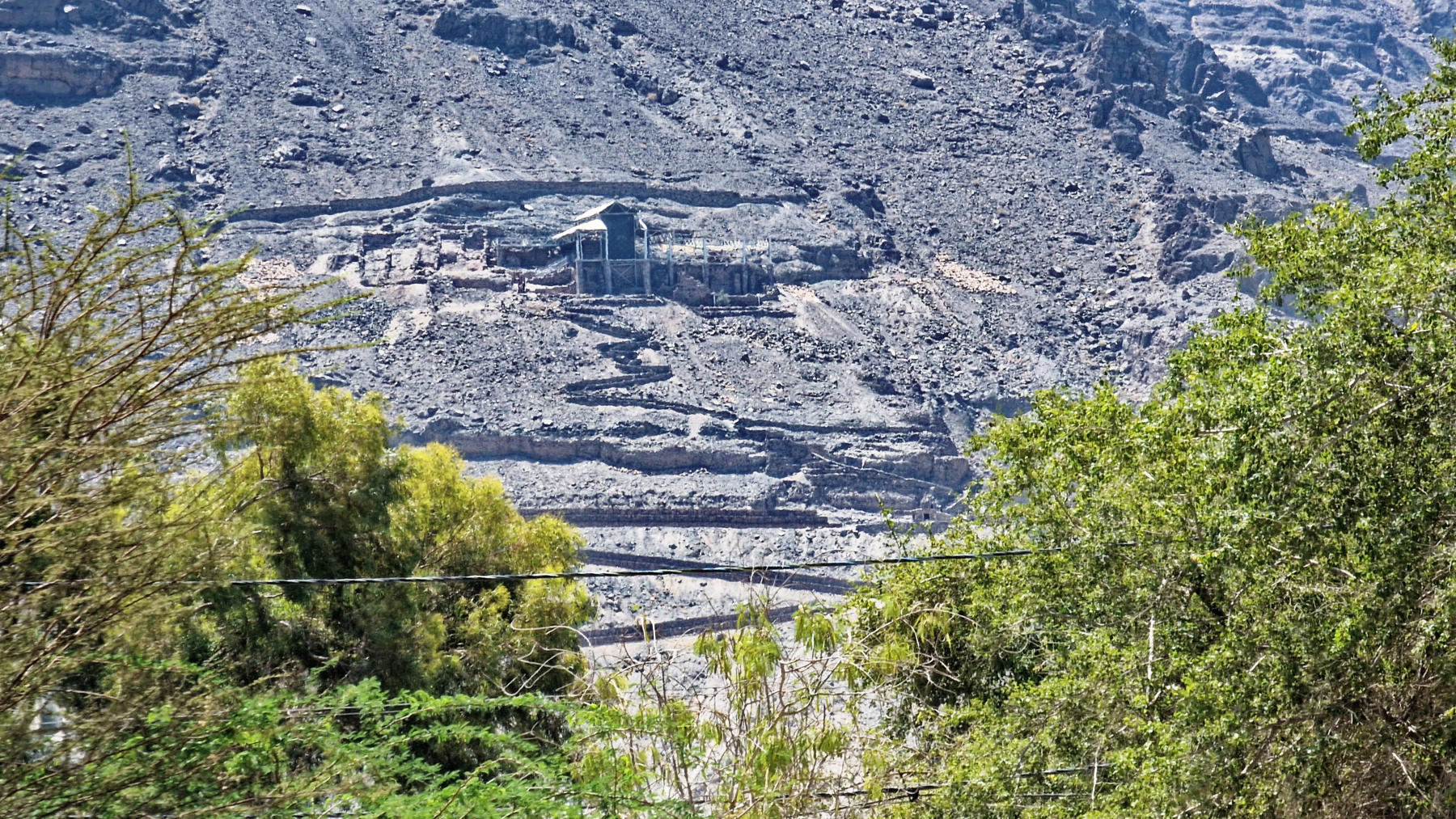 (see later) and we got various intimations of the scale of exploitation of the minerals that fringe the Dead Sea. 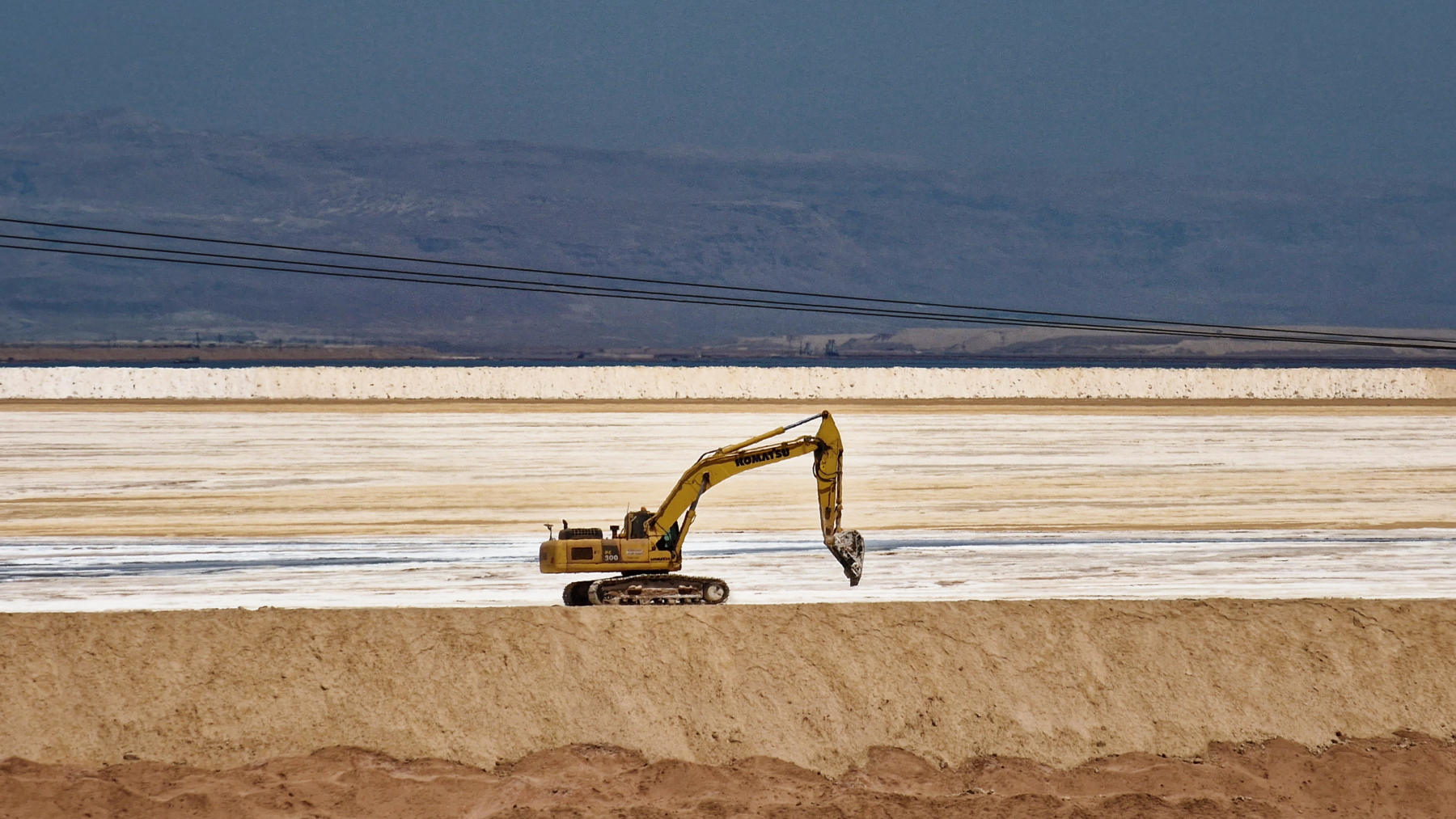 It’s not just salt, apparently; various minerals, such as potash, manganese and magnesium can be separated and shipped out; we saw a couple of potash lorries (which have replaced the trains which used to carry this freight) and they were big buggers.

Saeed found us a viewpoint where we could clearly see the salt fringing the shore. 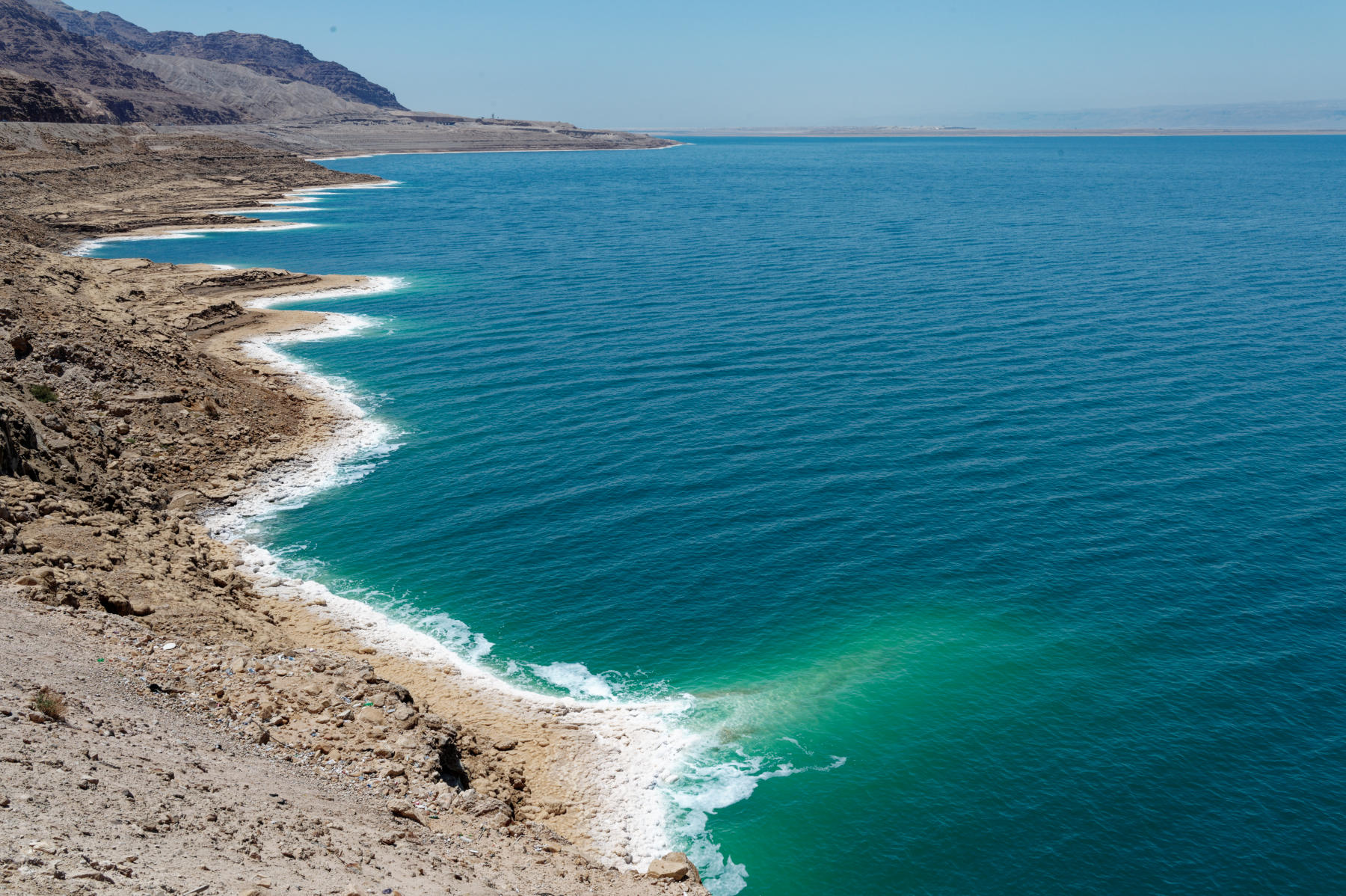 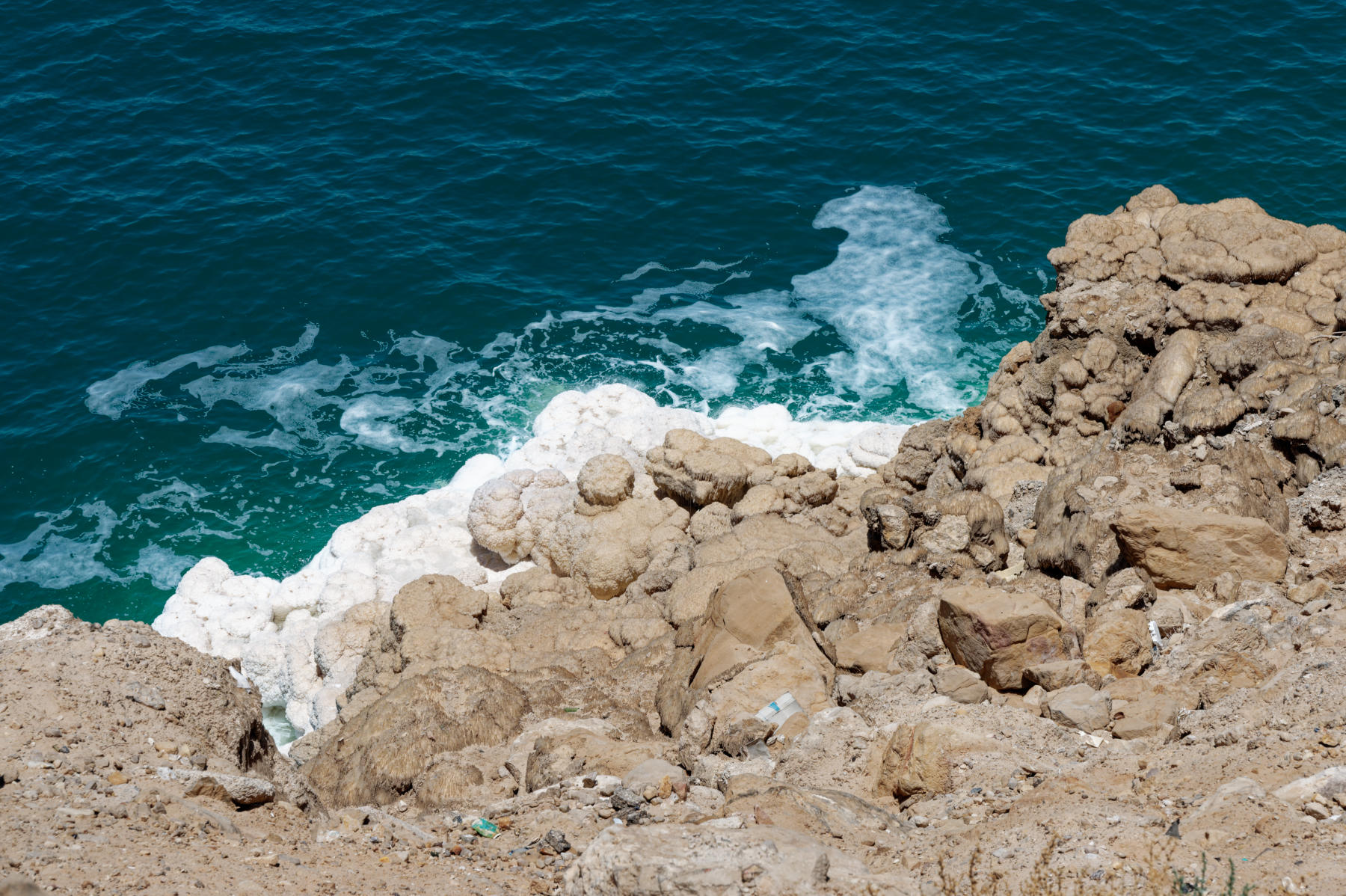 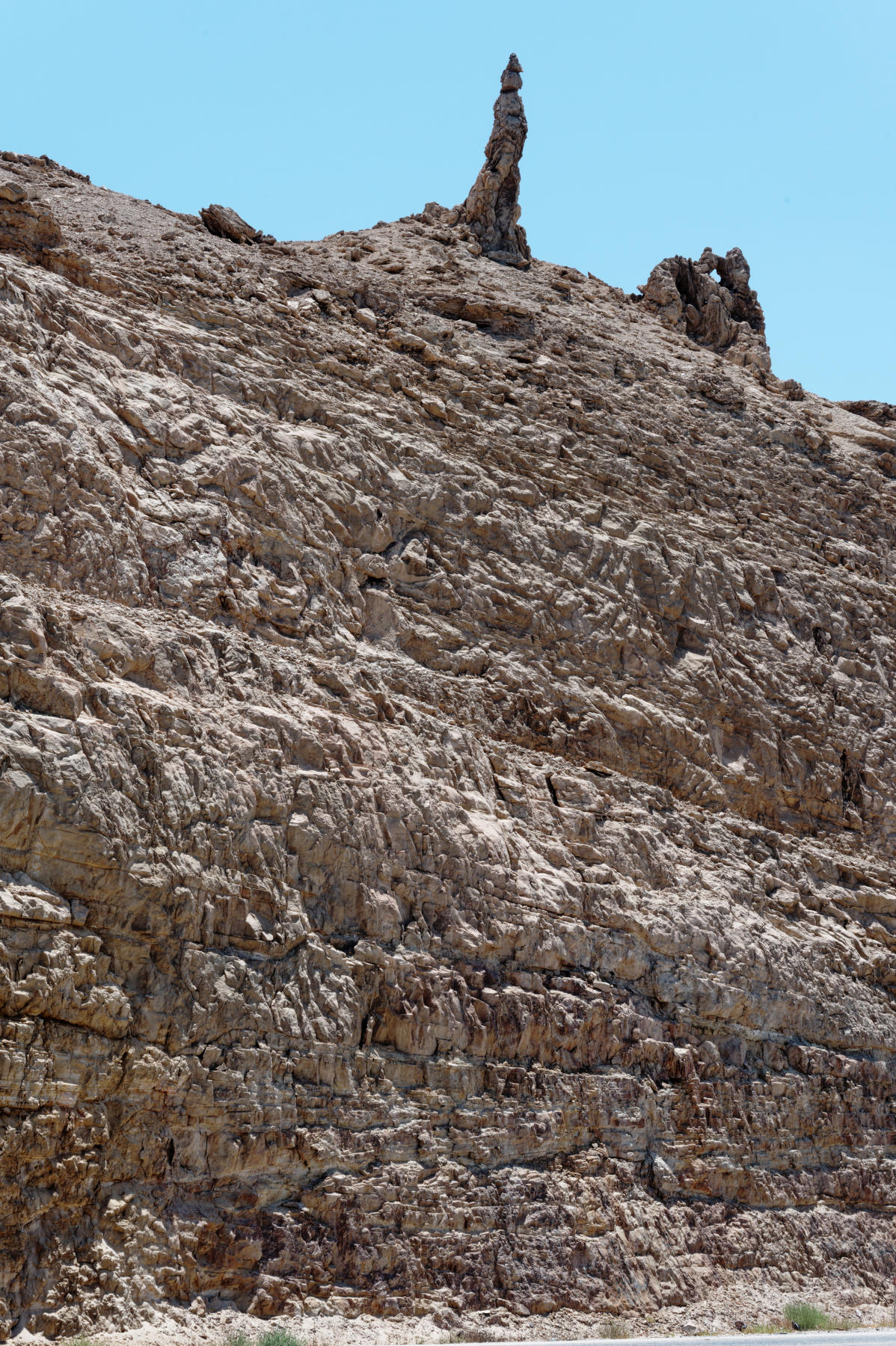 ah, you remember the story now, the one who was turned into a pillar of salt when she turned back to look at the destruction of Sodom and Gomorrah.  After this happened, Lot went off to that cave, which is now a cultural exhibit, “Prophet Lot’s Cave”. I suppose “the Prophet Lot was not a nappy one”. Thank you.  Thank you for reading my joke.

We had one more thing to look at before we got to the hotel area of the Dead Sea, which was Wadi Mujib, a place where one can go canyoning (after, presumably, some kind of unfortunate mental episode).  Saeed engineered an opportunity to go in to the adventure centre there and take some photos.  It’s a nicely set up place 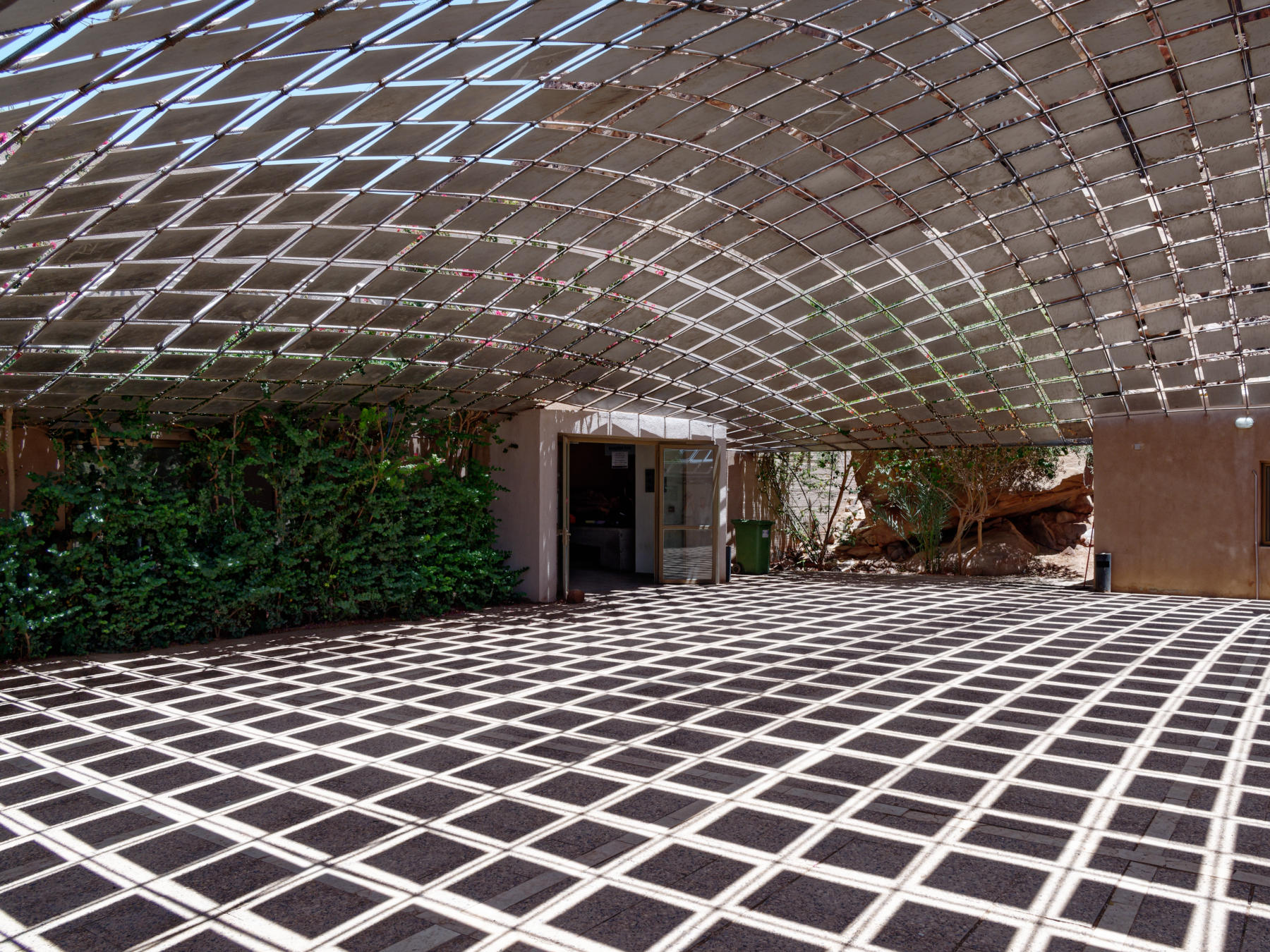 and we crept along towards where people can, despite their better judgement, plunge through water as they walk along a canyon. 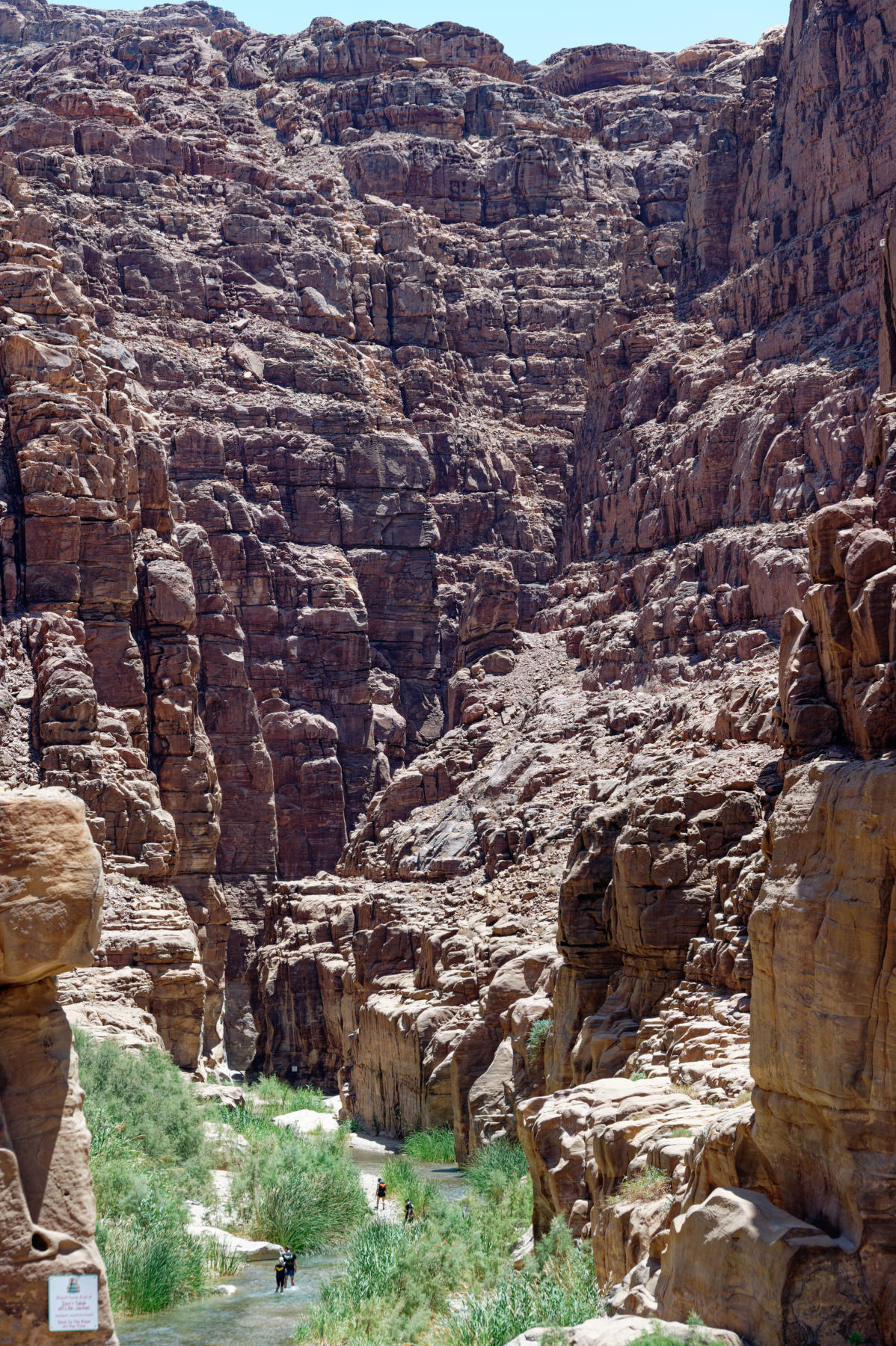 I’m a sucker for scenery, but I have reservations about going this far to see things. Jane, however, is firmly up for having a go at it at some point, which makes me feel very insecure.

Then we reached the hotel, which seems to take security quite seriously and was the first place that bothered to run a mirror underneath the car. Obviously it was clean enough so we were let in, and allowed to walk unmonitored through a security scanning arch.

At this point, the utter perfection in the execution of the arrangements made by Audley in the UK and UTA in Jordan showed just a tiny crack.  The UTA agent, Amer, had insisted that we go direct to the hotel, thus not leaving time to visit the Dead Sea Panorama Complex which had been our original plan.  But when we got to check in, we found that our room was not going to be ready for another hour, so we could have made that visit.  OK, it was an excuse for a gin in the lobby, but it means that we were inconvenienced to suit the schedule of the UTA agent, who was clearly in a hurry to get on to the next thing, but that’s not how things should work.

Anyway, we eventually made it to our room, which is lovely.  It has a balcony with a view 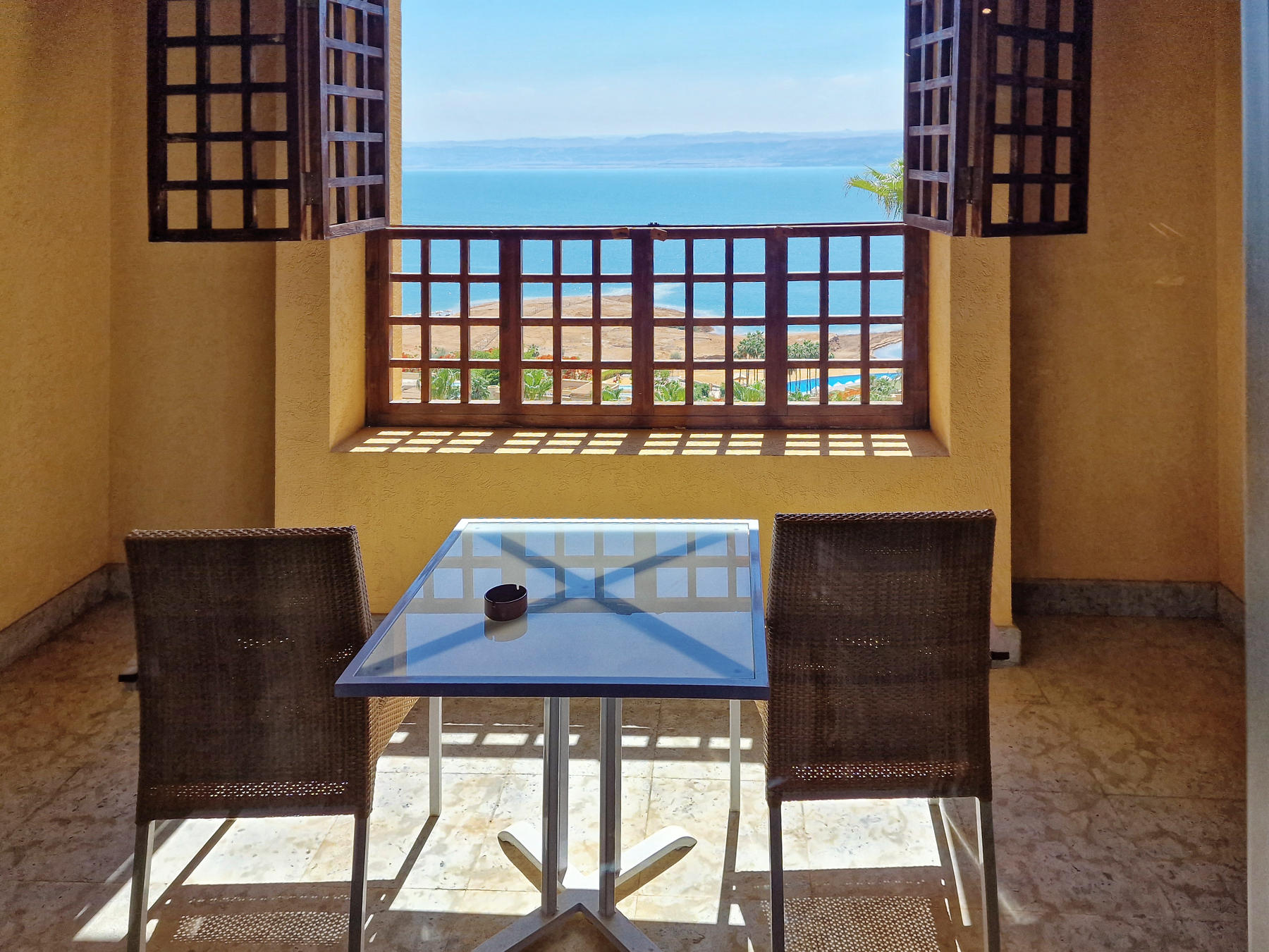 (not that you’ll find me sitting out there during the day – it’s 38°C out there as I type, and this trip is enabling me to gather further evidence that my cut off for being able to function is a good 10° cooler than that) and the view is of a very posh, but still resortish, resort.

Having reacquainted ourselves with air conditioning and internet, we strolled out to explore the place a bit and to find a bite to eat, settling on a restaurant offering “Mediterranean” – mainly Italian – cuisine just in time to order before the end of their lunch time service. 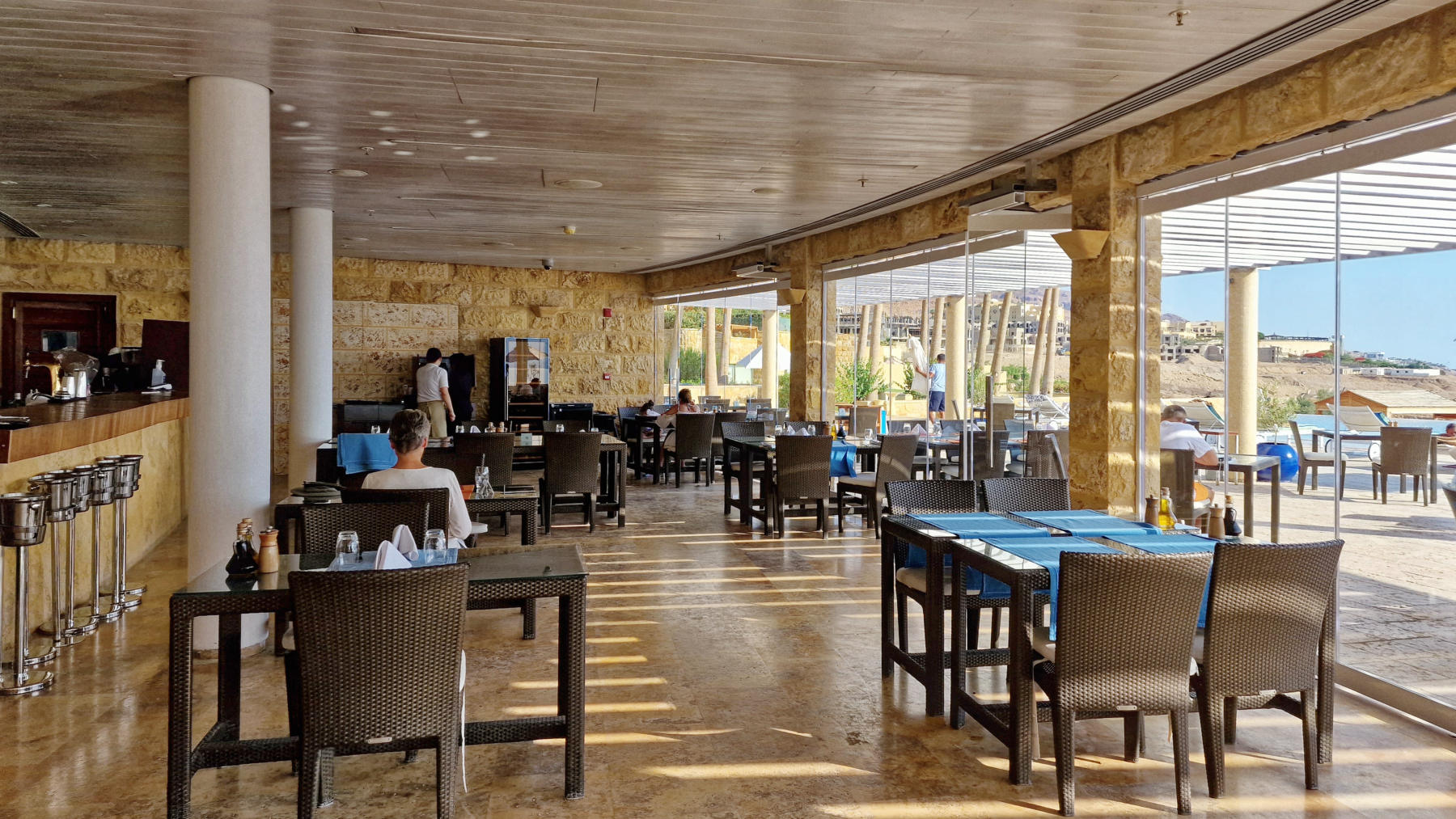 Afterwards we went back to the room and brought the blog up to only a day behind as the sun set. 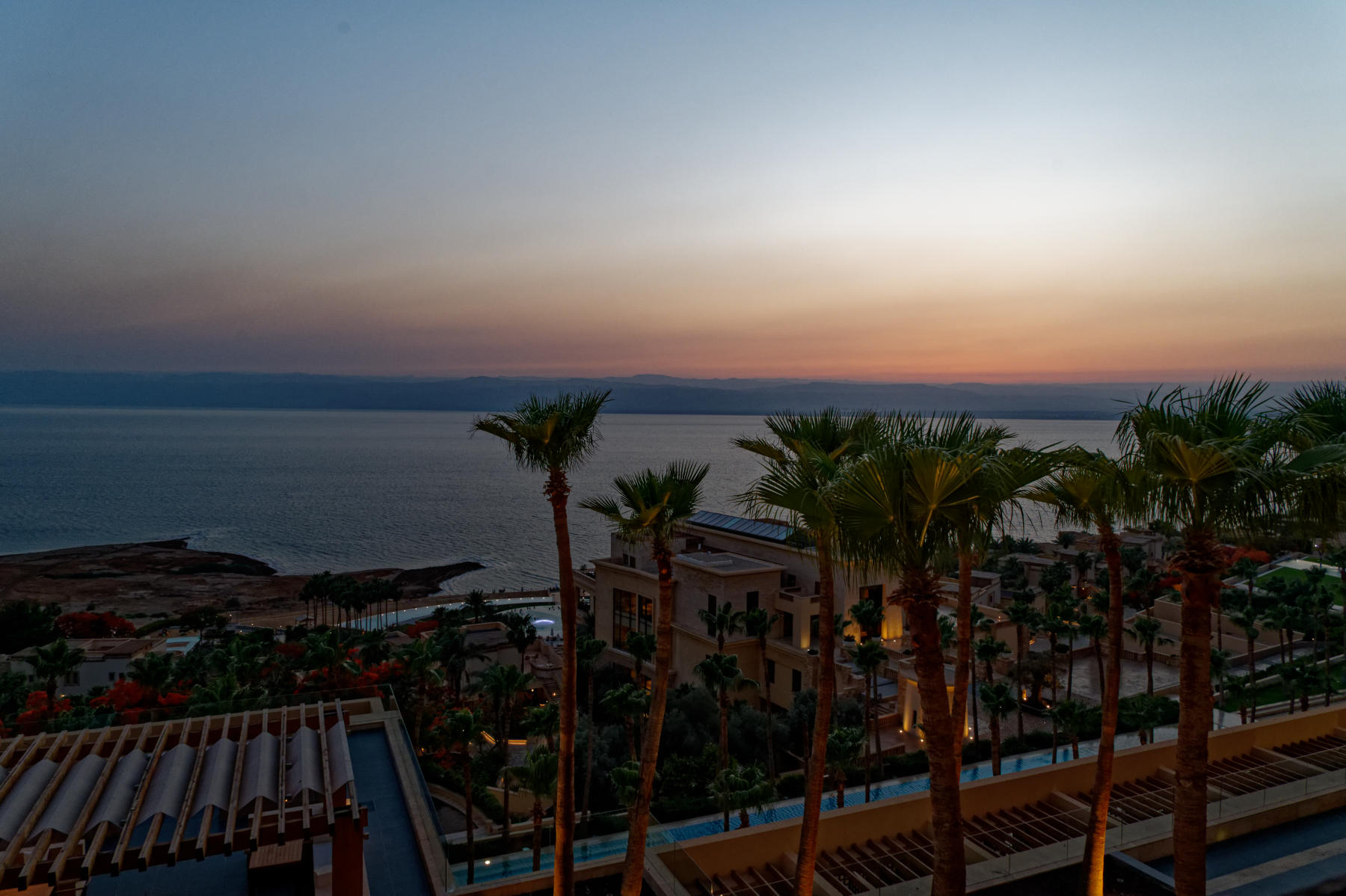 People who understand cricket and message training for press relations will understand the term “dead bat”, meaning to take the sting out of a delivery safely.  Whilst sitting on the balcony, Jane found out about another interpretation when she was disturbed by a small thump: 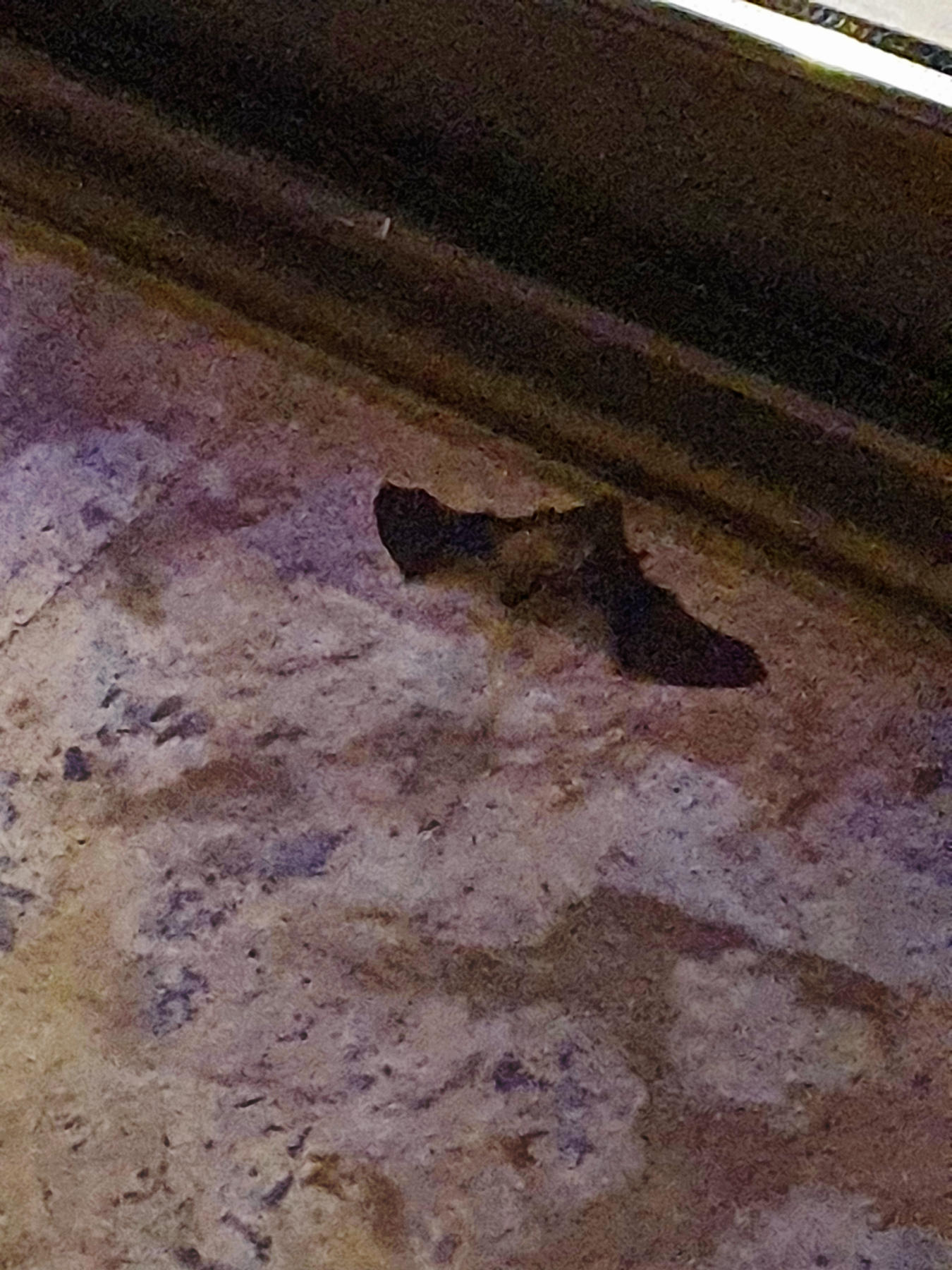 A bat had, for some reason, flown into the enclosed balcony and hit the glass doors, which is very unusual.  Anyway, as it turned out, everything was OK and no bats were harmed in the rather tortured production of this paragraph – it upped and flew away about its batty business, unaffected as far as Jane could tell. 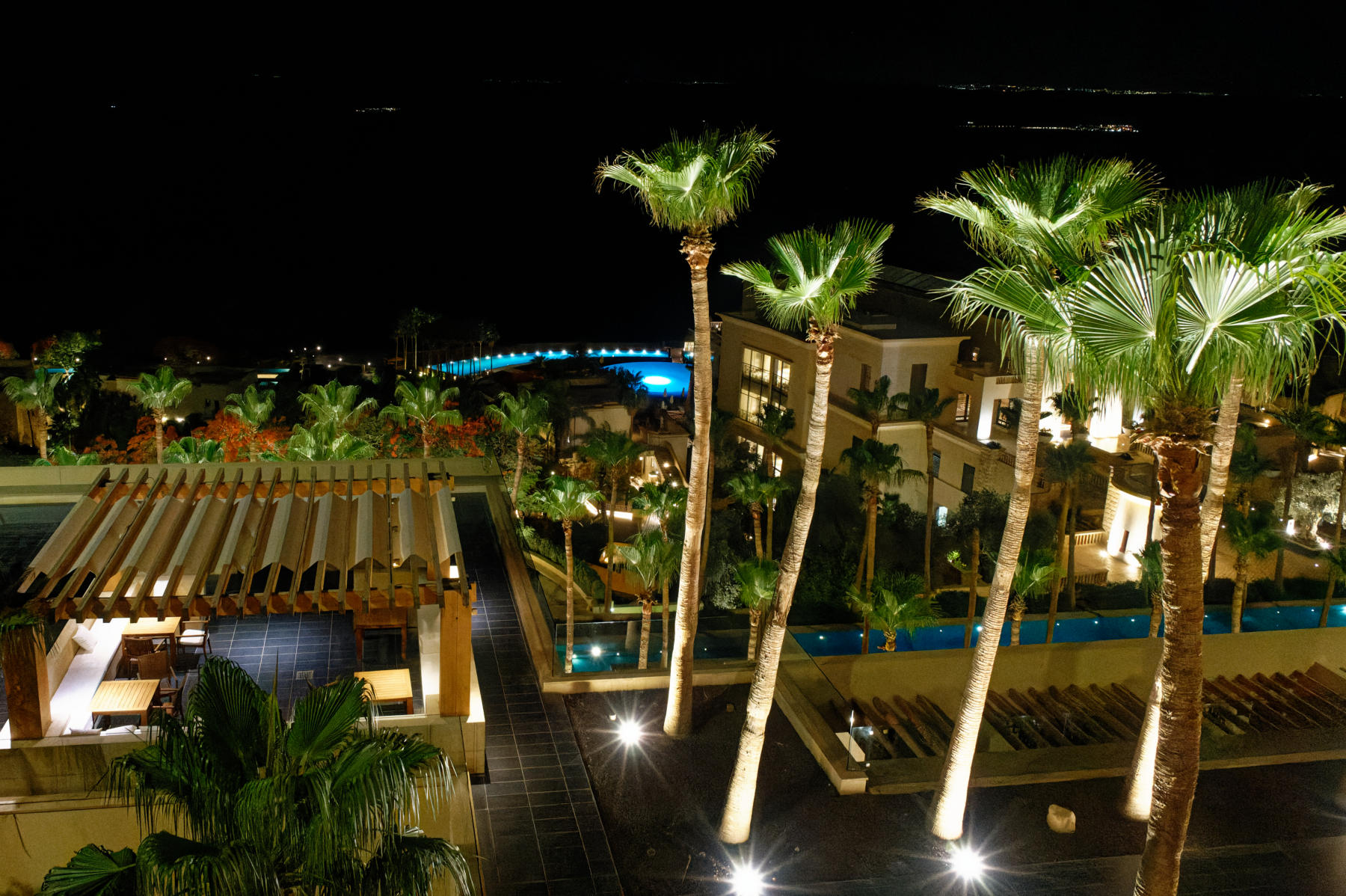 and so it seemed a good idea to get our heads down in readiness for the next day’s excursion – to Bethany, the site of Christ’s baptism. So please come back to read about how that went, won’t you?