Saturday 3rd July, 2021.  One gets to be obsessed with the weather while on holiday in Iceland.  It’s not a conversation-easer like in England; here, it really matters.  The forecast for the day was hopeful.

but the reality was much better. 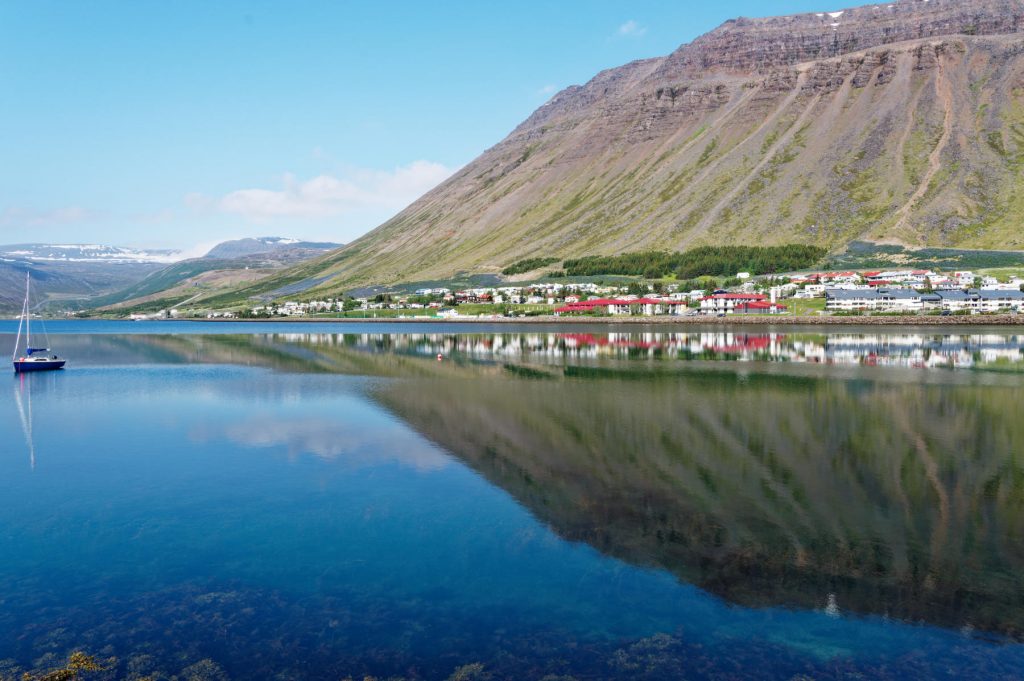 Ísafjörður looked lovely in the sunshine; and Jane pointed out that it also has an unusual-looking church. It seems to be a thing here. 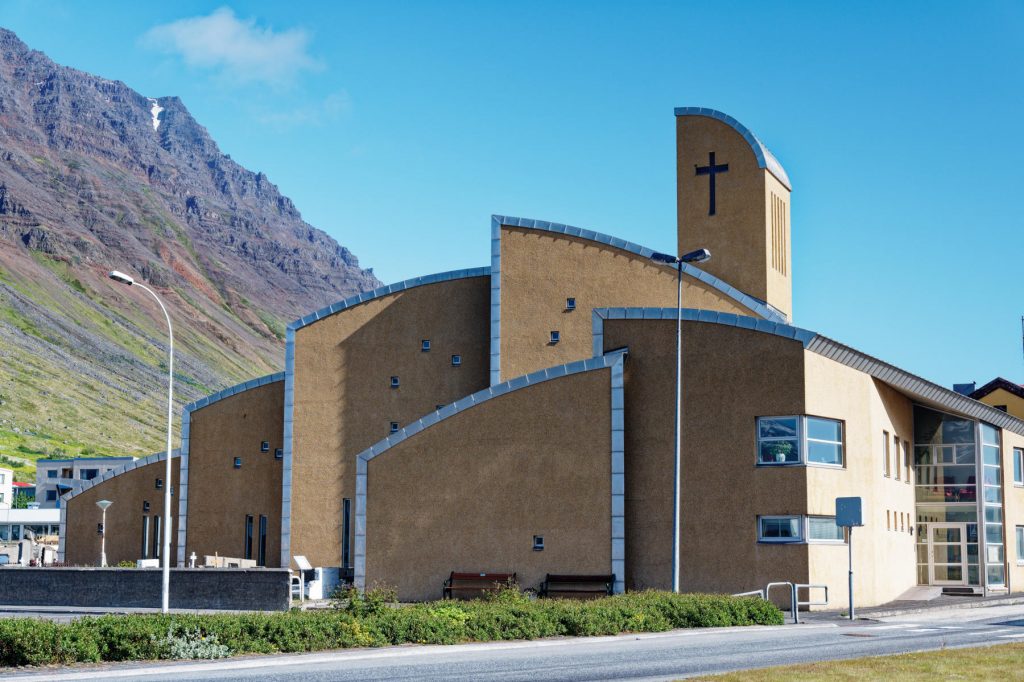 We set off into the sunshine with a song in our hearts and a long day’s driving ahead.

Then we ran into the fog.

However, Dagur Had A Plan, and so took us up into the hills, where we could get some good views looking down on the clouds, which is always nice. 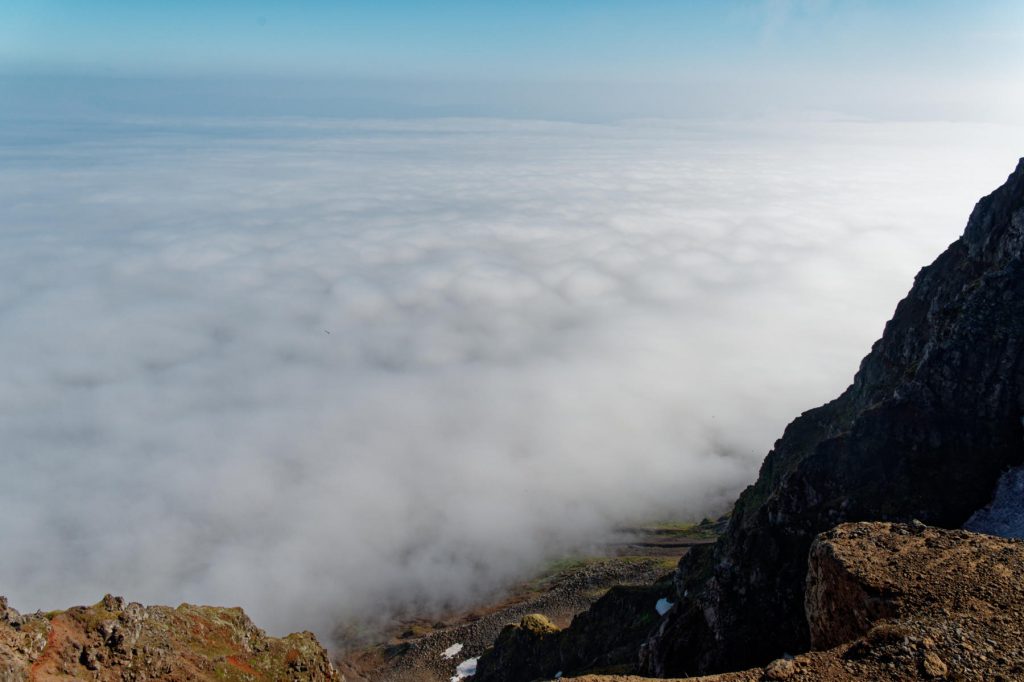 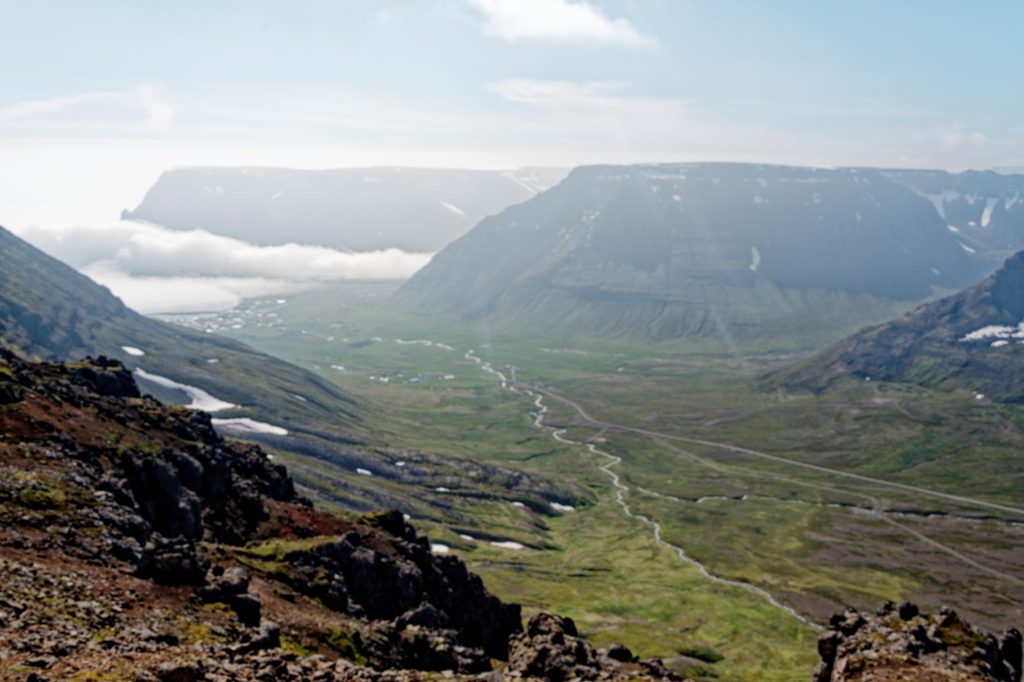 Today, we learned the proper Icelandic word for the “Valley Fog” that we’d first noticed yesterday. It’s called “dalalæða”; “dala” means valley, if my knowledge of Swedish is anything to go by.  This is a form of sea mist, but it’s pretty much unique to Iceland, as far as I can make out. Every so often for the rest of the day we entered a bank of mist, or it figured as part of the view.  So, for example, we stopped at an outdoor maritime museum at Bolungarvik, and could barely make it out through the mist. 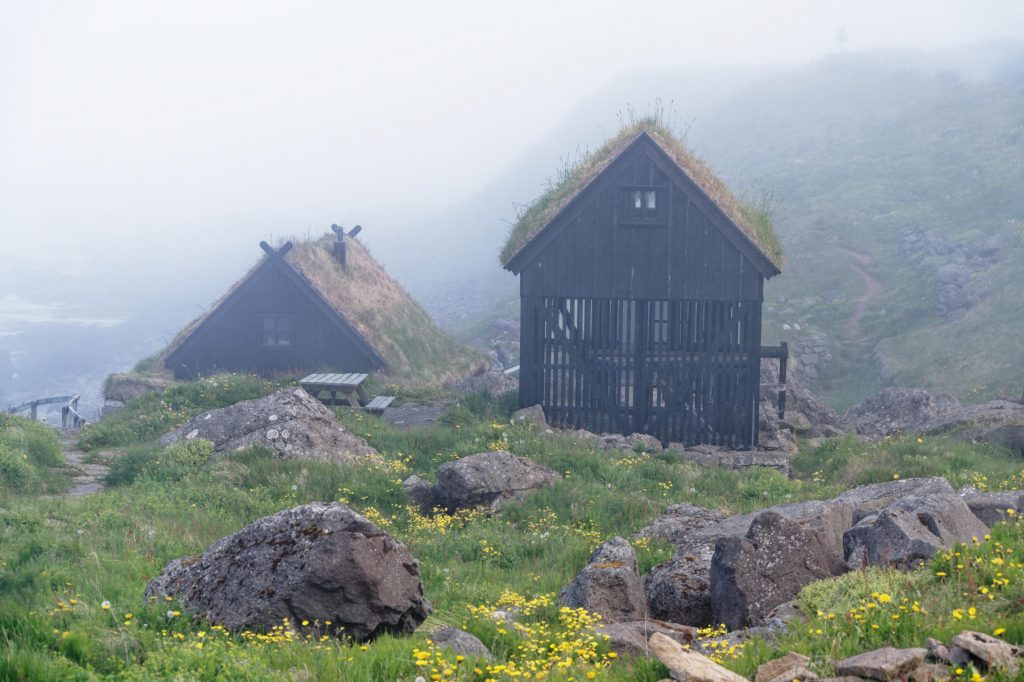 But the mist also provided a lovely backdrop to a photo of Ísafjörður. 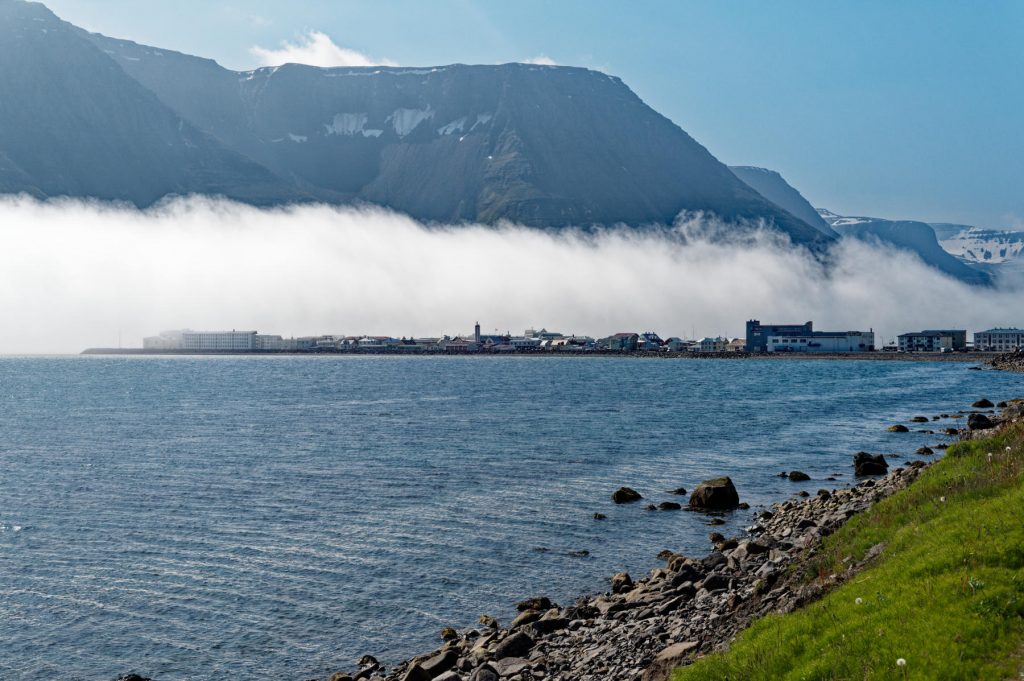 Our next stop was at a museum dedicated to the Icelandic Arctic Fox.  Officially, this is the same as arctic foxes found elsewhere; but an interesting information film gave the impression that actually the genetic makeup of most of the Iceland population is diverging from those elsewhere. It’s an appealing place 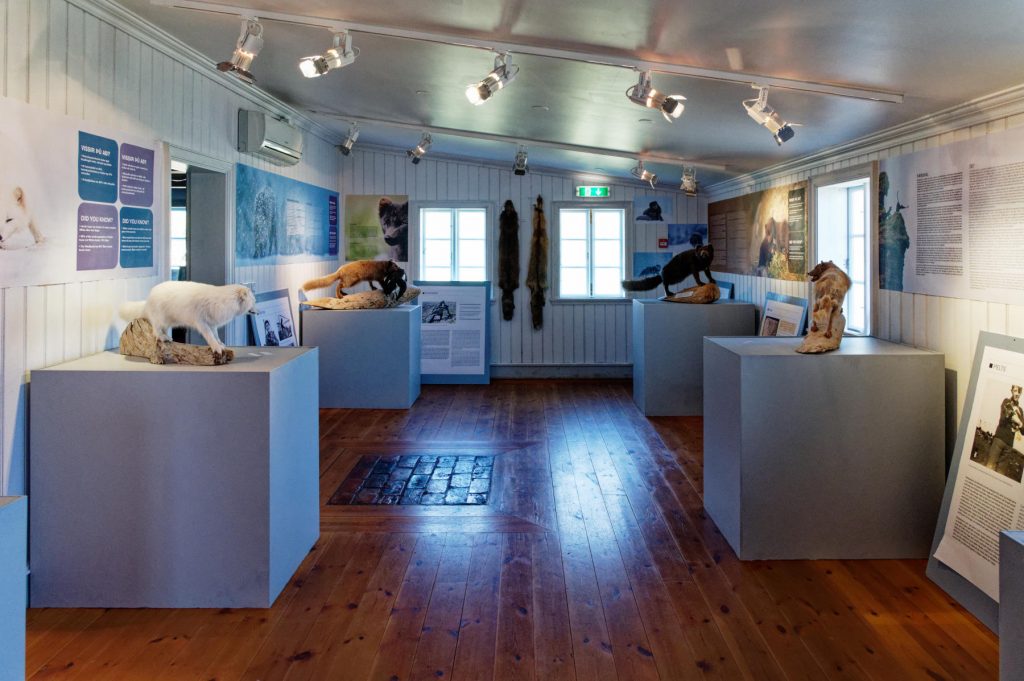 with coffee and cake if you want it, and several (stuffed) examples of foxes, such as this, which we judged to be the finest specimen on display. 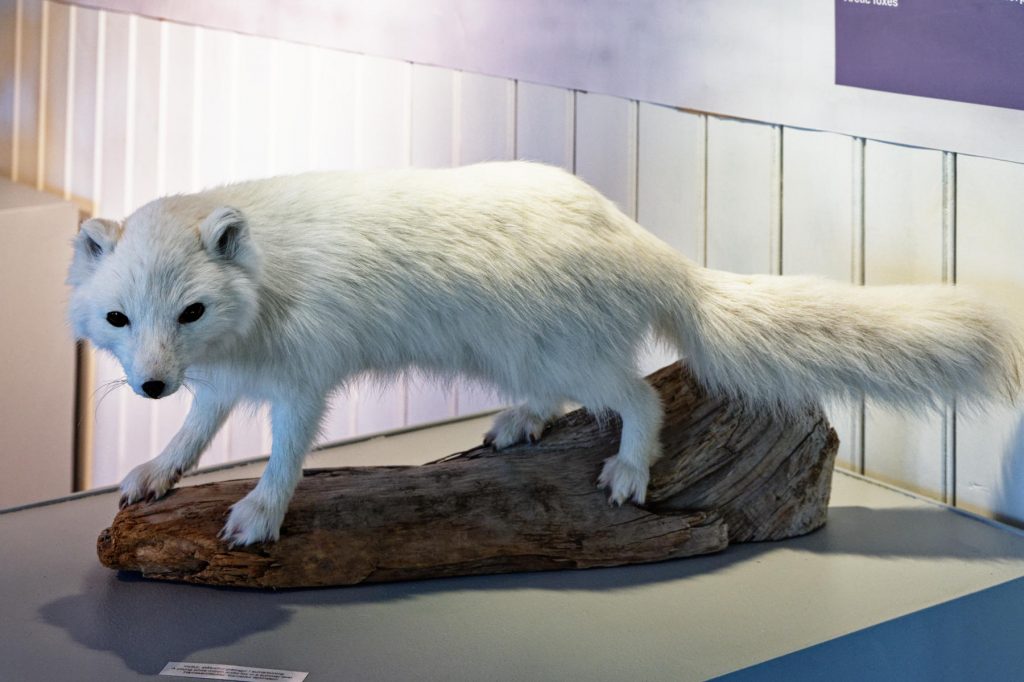 Both Jane and I were under the impression that arctic foxes had a winter (white) coat, which changed into a summer (dark) coat.  It turns out that we were wrong; there are two “morphs”, white and blue, and while their coats may change a little in colour, it’s not the transformation that we’d previously thought.

And outside, in a large caged-off area, they have a real, live, fox. 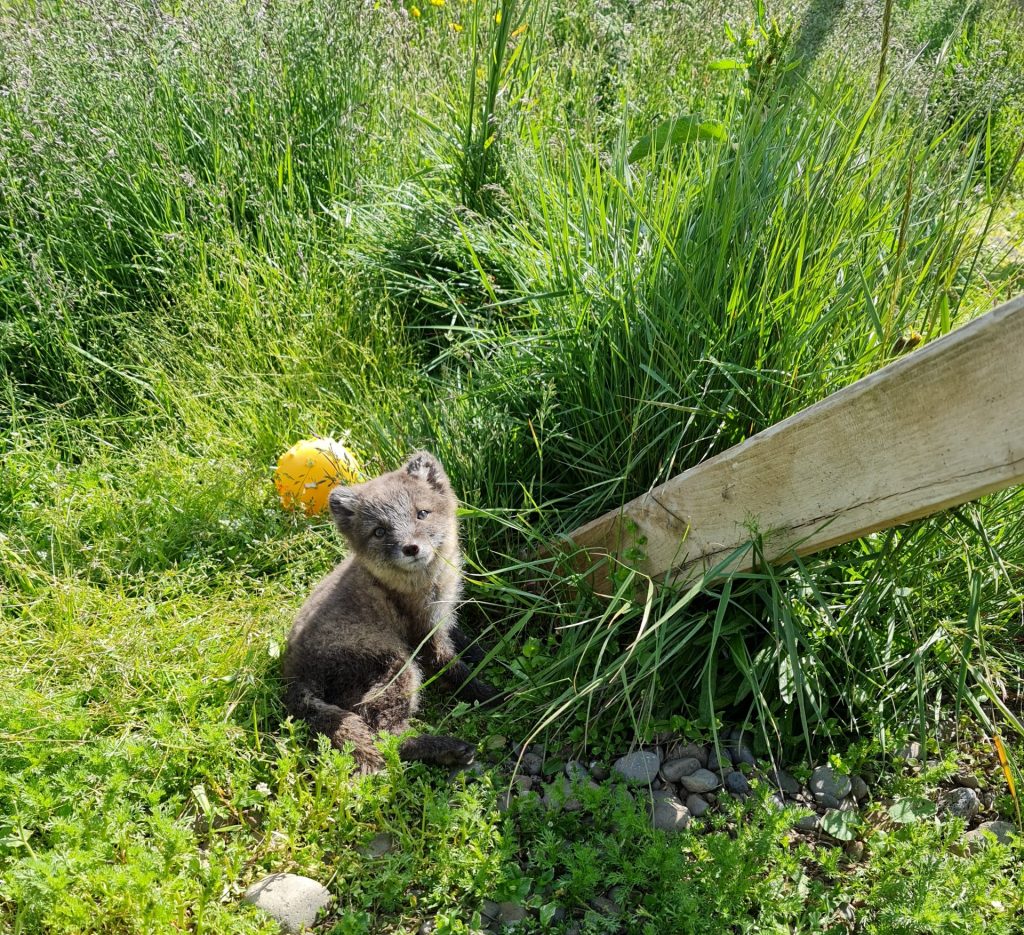 It’s just a pup; a Bambi fox, because apparently it’s parents were shot. It’s not known what its future holds, but for now, it is supremely cute.

Further cuteness was on display a short while later, as Dagur suddenly braked, turned round and went back along the road we’d come along.  It turned out that he’d spotted a lone seal on a rock, and so stopped and took some photos. 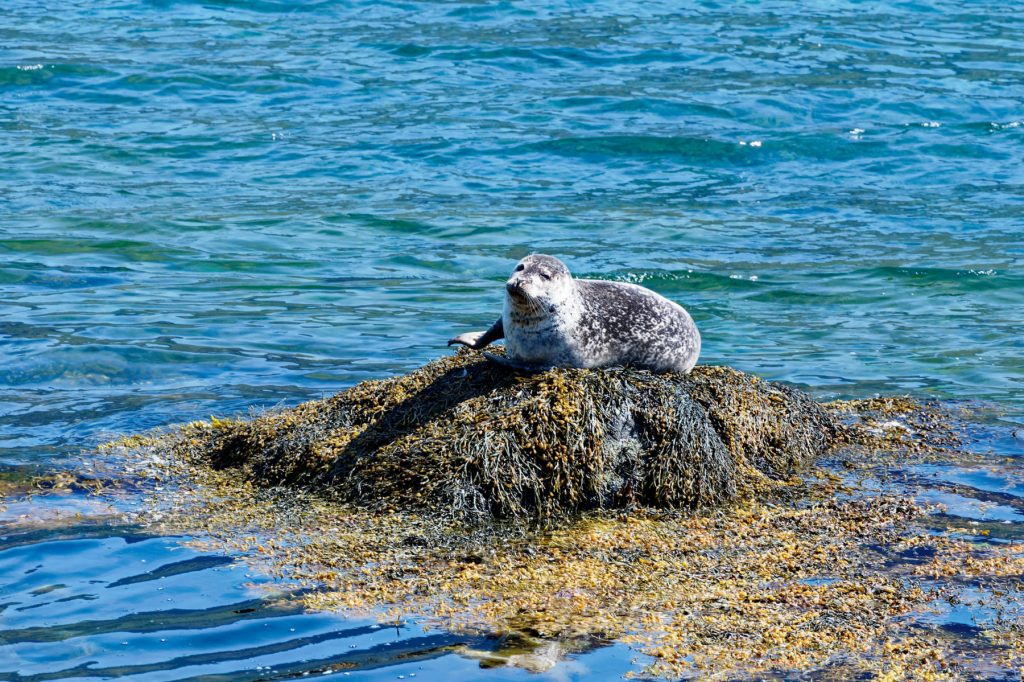 There is an “official” place to view seals a little further around the coast, so we stopped there; but one really needed binoculars to see the seals; my general-purpose lens could barely pick them out. 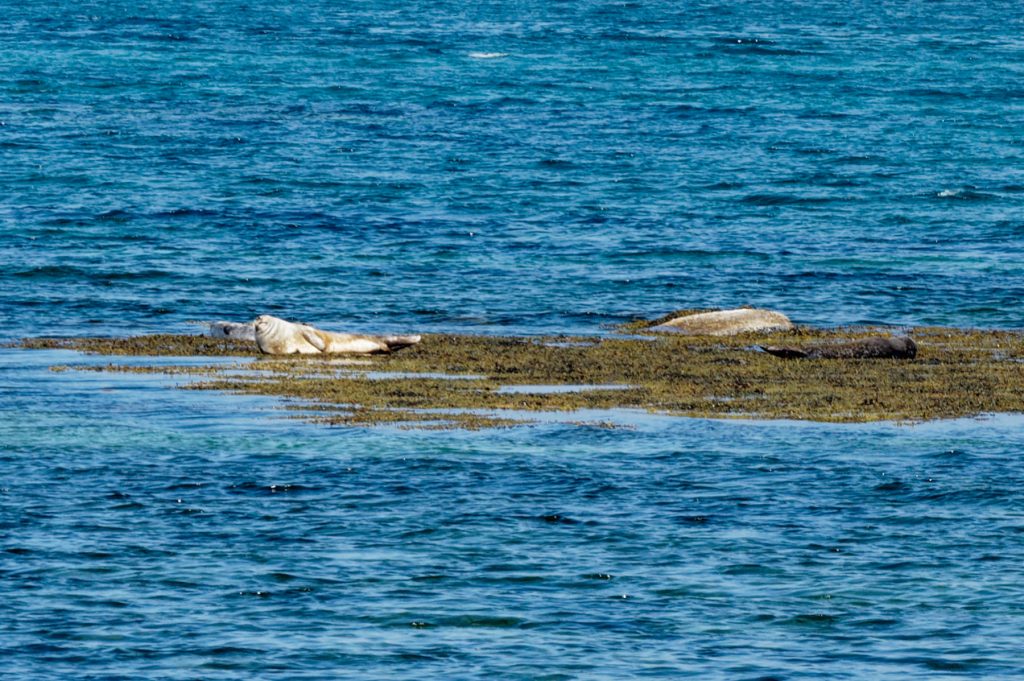 and my phone couldn’t do the scene justice, either. 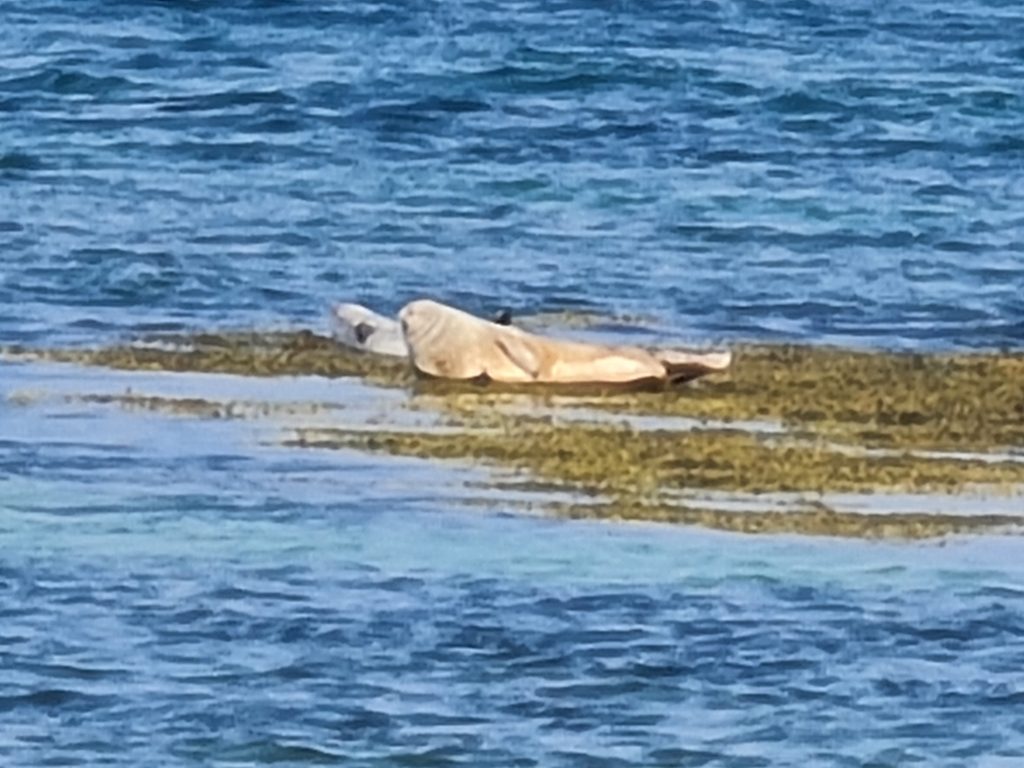 (though, once again, this image is a tribute to the imaging power of modern phone cameras.  I could barely distinguish between seals and stones with the naked eye).

Shortly after this, we had a scenery stop at Rjukandi, where there’s a pretty cascade. But this is Iceland, so it’s not a real waterfall.  We did venture off-piste to try for a photo of three others. 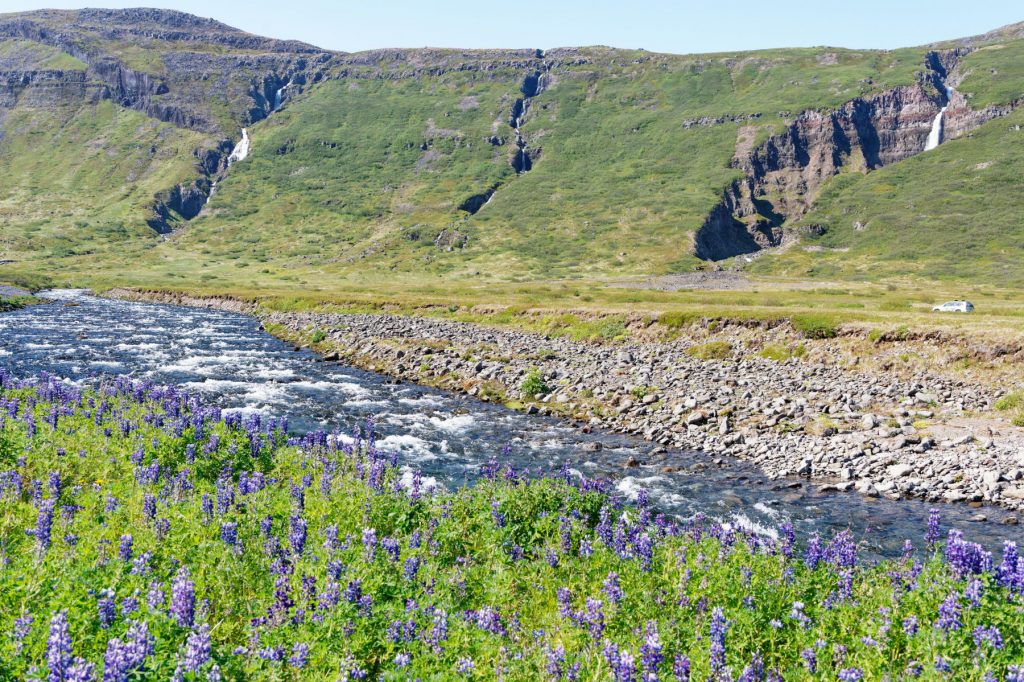 I particularly wanted to capture this as a wonderful demonstration, suitable for any geography/geology lesson, of water’s power of erosion.

It was time for lunch, and serendipity stepped in at this point, as we were near a place where we could see a round of Vestfjarðavíkingurinn 2021, the Icelandic Strongest Man competition.

It was slightly surreal to see these large chaps congregating 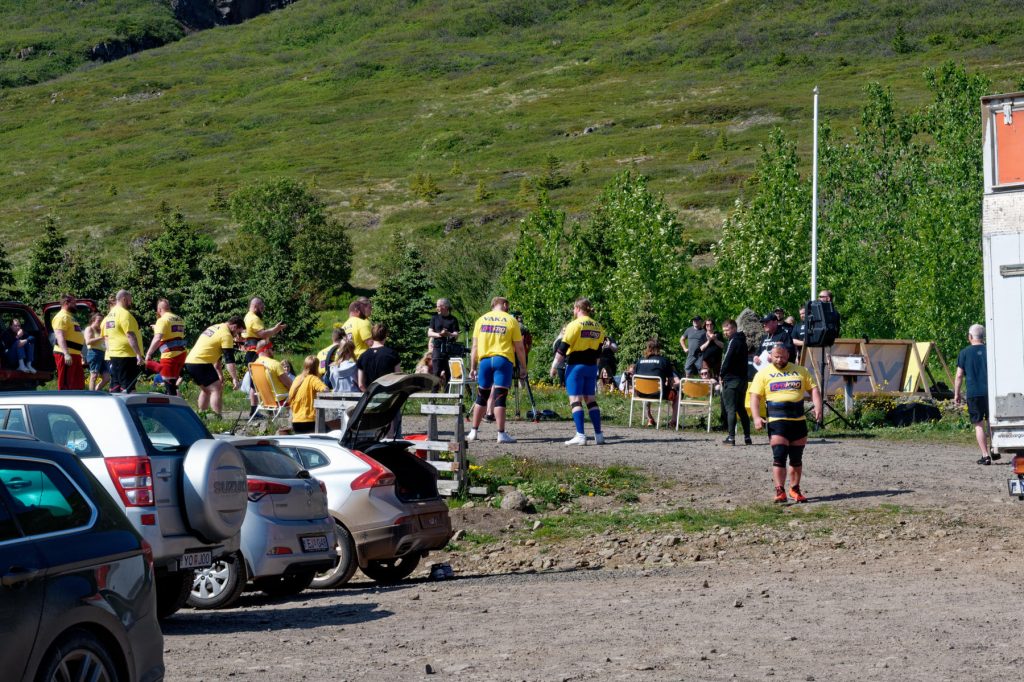 after which they came into the restaurant for lunch. 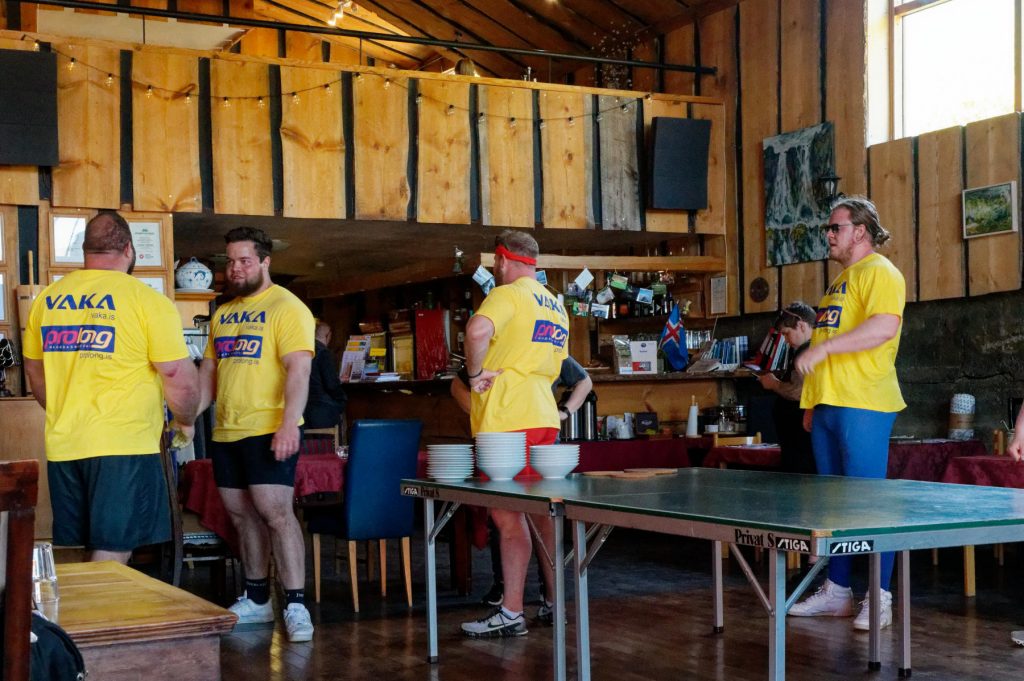 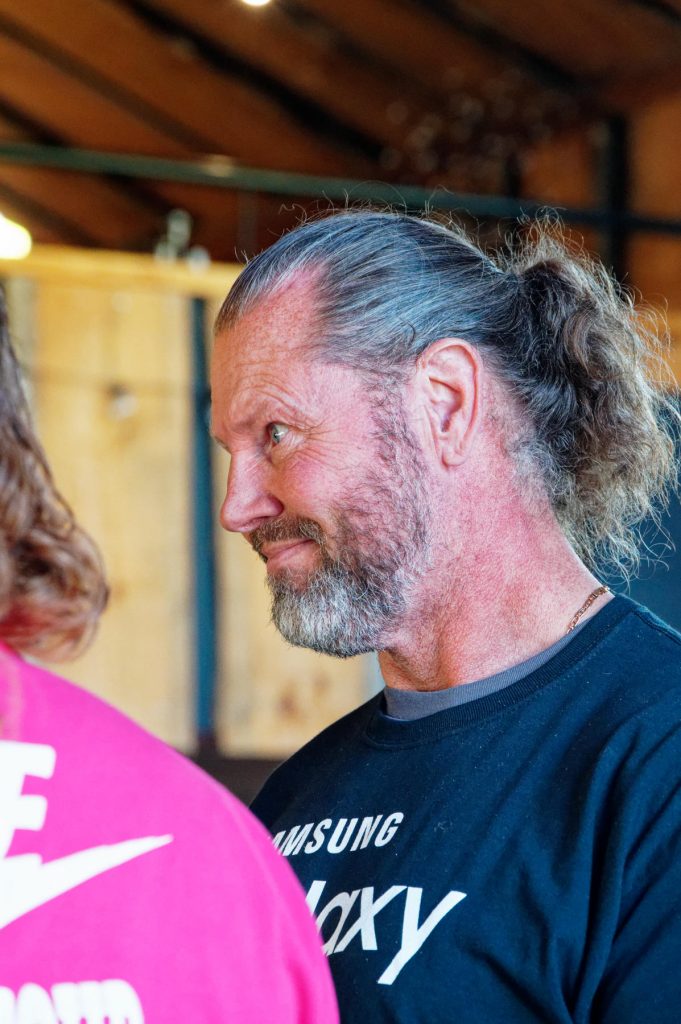 After this unusual lunch stop, we next visited Saltverk, a small factory producing some of Iceland’s (apparently) famous sea salt in a 100% sustainable fashion, based on a geothermal source at Sudureyri. 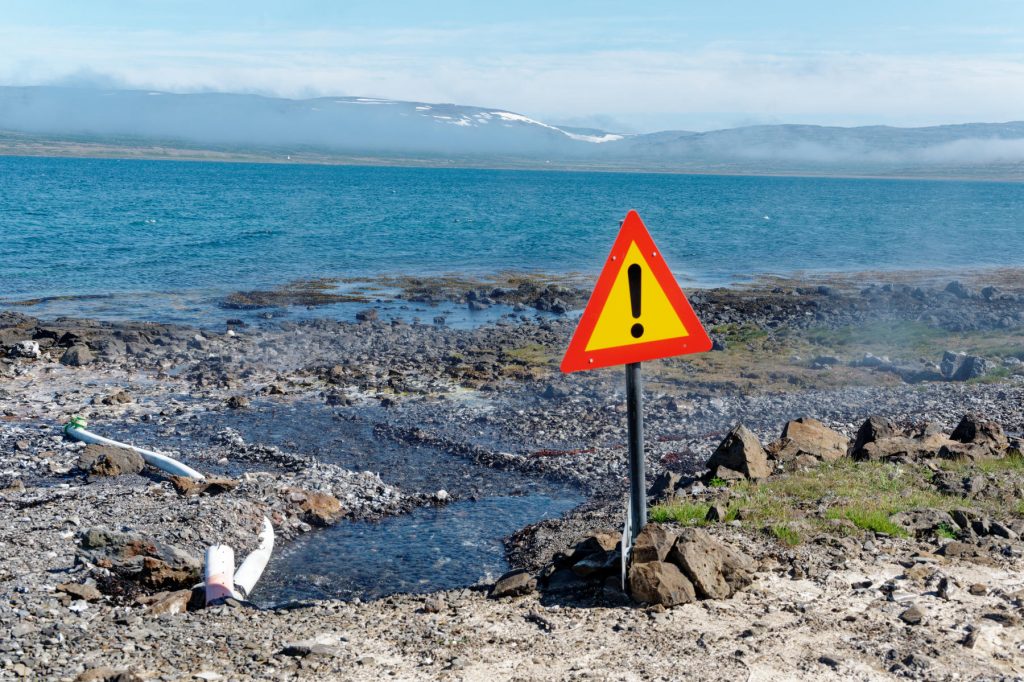 This heat is used to evaporate salt water taken from the sea from its normal salinity of around 3.5%, in stages, to around 28%, where the salt starts to separate out in its tanks and sink to the bottom, where it can be collected. 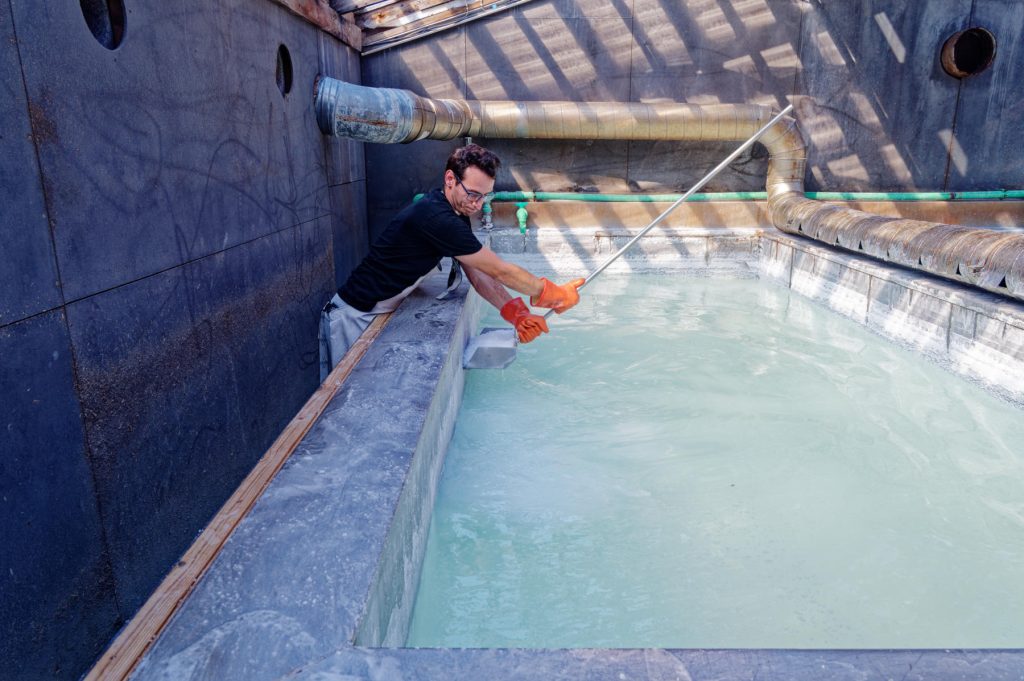 and then put into drying racks before being packaged up. 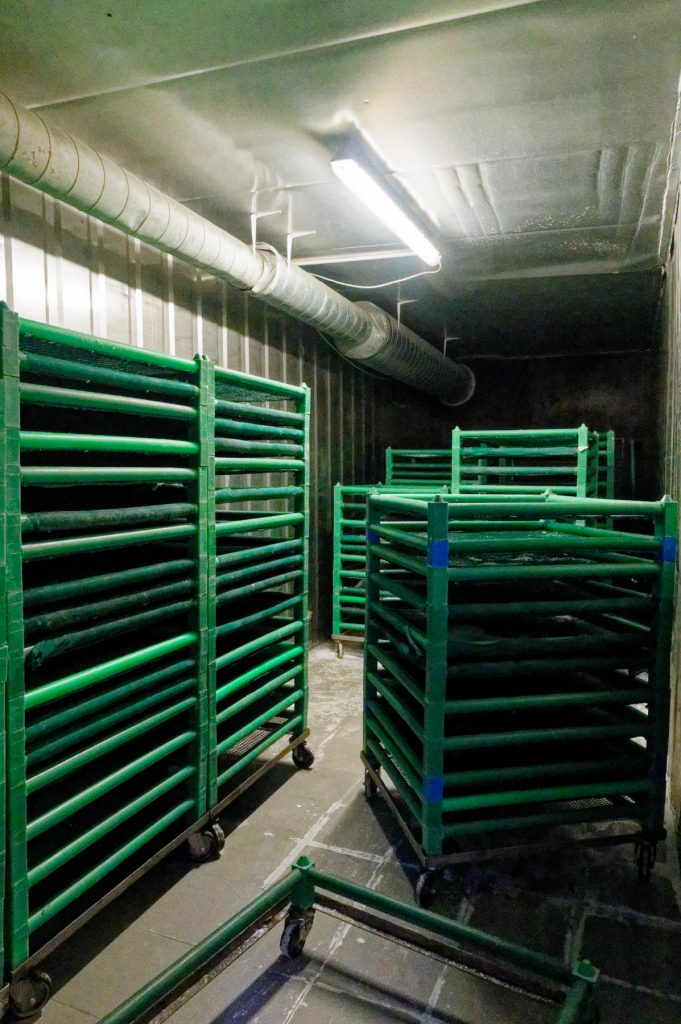 The salt is mixed with other ingredients such as thyme, or smoked, or sold untouched by further processing.

The rest of the day consisted of simply getting to our hotel, and thus completing a journey of over 350km.  The scarcity of towns and villages as we travelled underlines how isolated these parts of Iceland are, and goes some way to explaining why some places are struggling – the distances are too large for any kind of convenience in living.

We passed a couple of noteworthy buildings on our route to the hotel:  a house that looks more like a small castle (unoccupied definitely, and abandoned, it would seem); 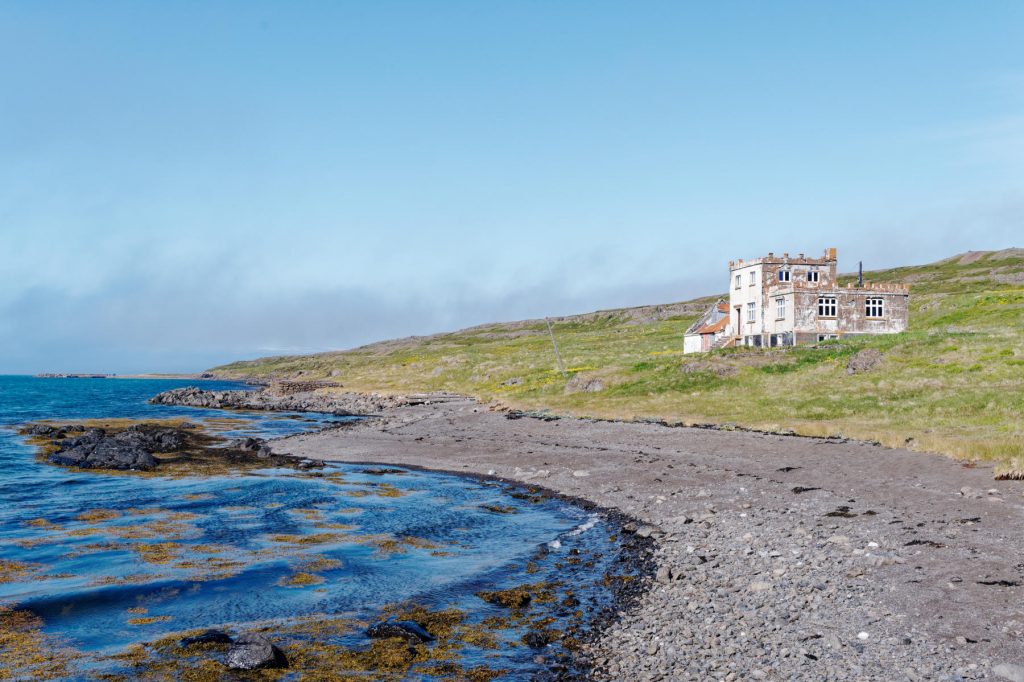 and another for our informal collection of unusual church buildings – this one at Holmavik with rainbow steps. 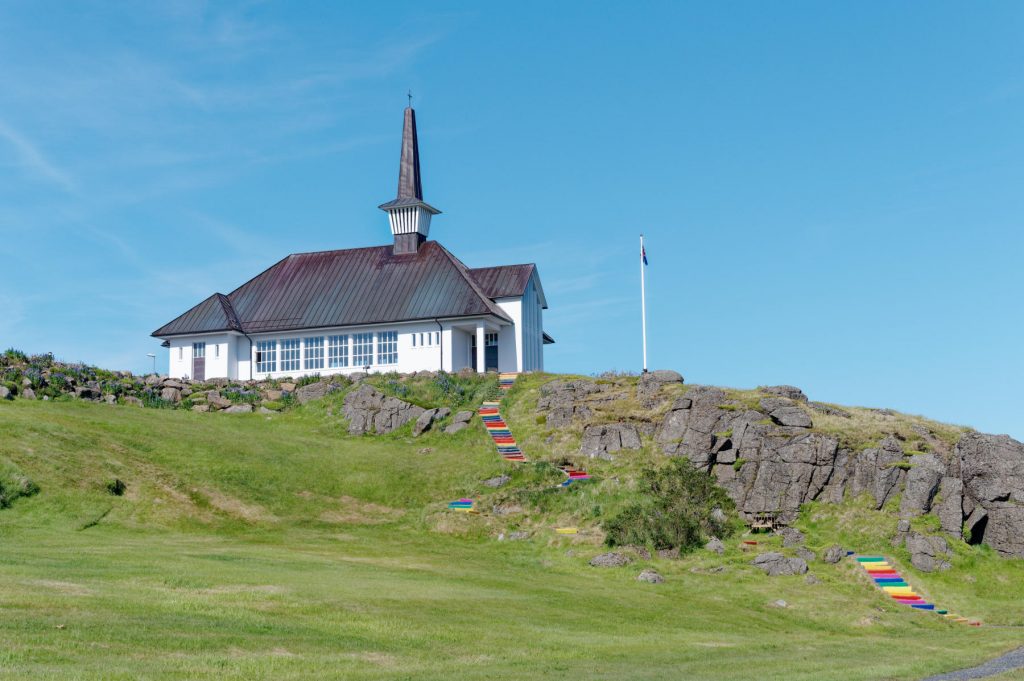 And so here we are at our hotel, at Laugarbakki – a modern and quite imposing edifice, with, as we’ve now come to expect, very good food in the restaurant.  Jane had a salad which included unusual-coloured pea pods: 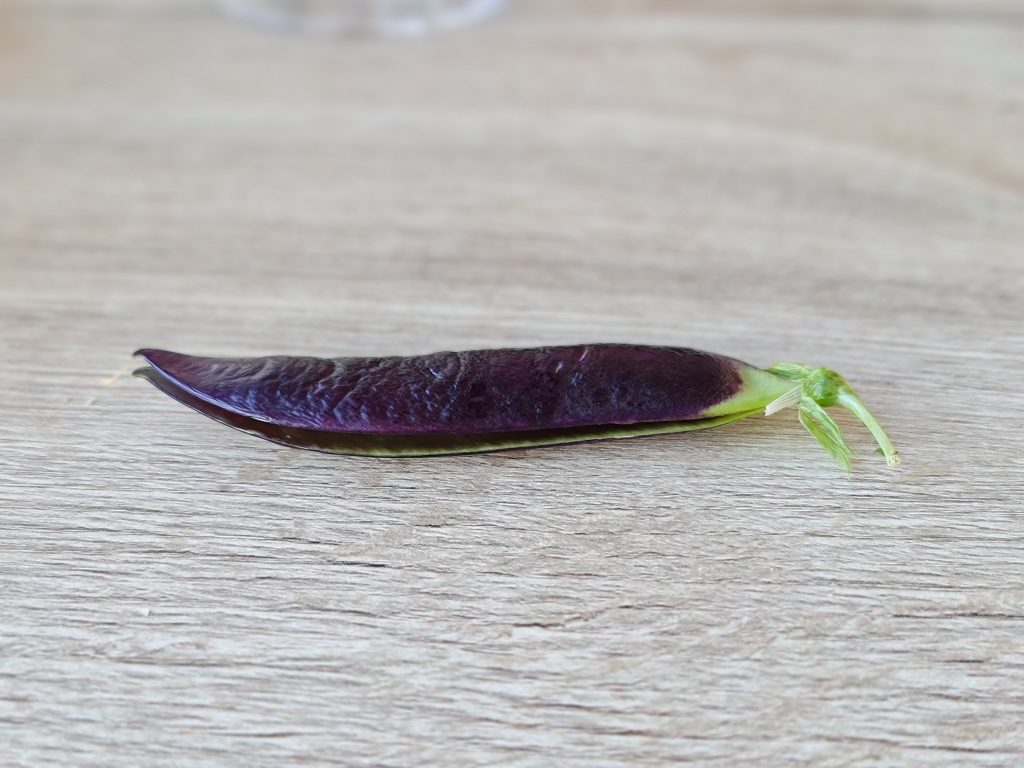 She didn’t eat it, of course, as she’s not a Purple Peapod Eater.

So here we are at the end of a varied day. We have a similarly mixed programme of things to look forward to tomorrow, so I’d be very glad if you were to come back and Read All About It then. For now, good night!