Sunday February 27 2022 – Lanzarote’s usual brisk breeziness turned into a Yellow Warning of wind for today which, combined with scudding dark clouds, made for a very grey day. (Lanzarote was lucky – other islands had an amber alert.) Sloth beckoned, but another welcome injection of Earl Grey gave us the necessary fillip to make at least a local stroll seem like a reasonable idea. There was, at the very least, the matter of the Necessary Steps to be taken.  So we headed out to recreate, correctly this time, the local walk from the Lanzarote book, albeit in reverse and starting from the wrong place.

We located the Necessary Steps that – you’ll remember, because you’ve been paying attention – Needed To Be Taken, walked up them and took them. 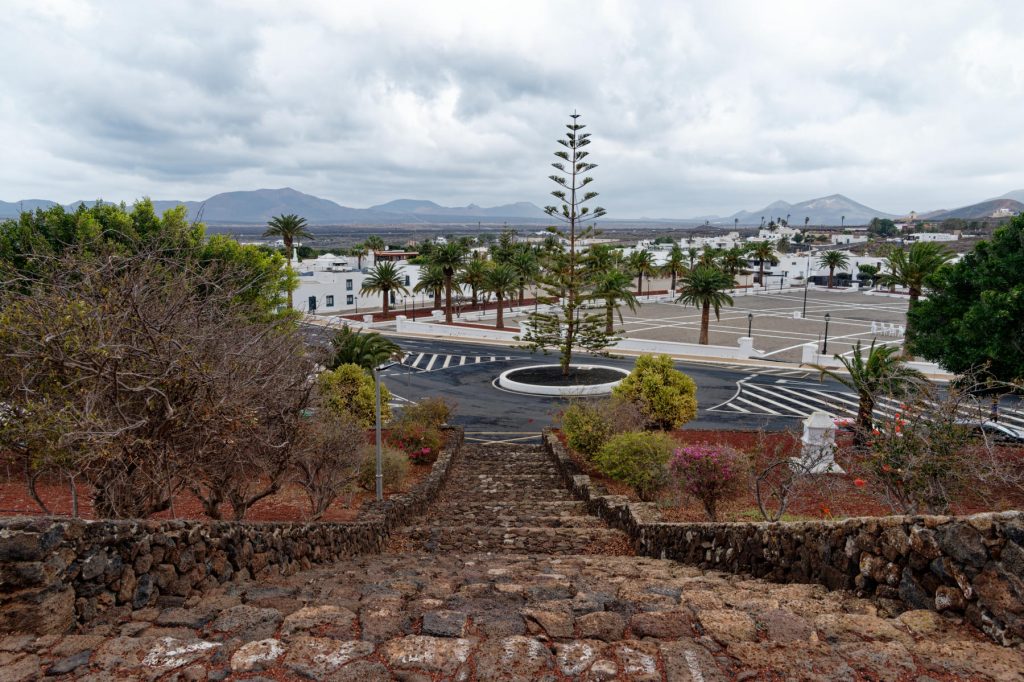 Then we walked the trail which leads from the top of these steps to the ones we’d mistaken them for on Friday, taking in some views of the hills overlooking the town, which show some evidence of programmatic cultivation, 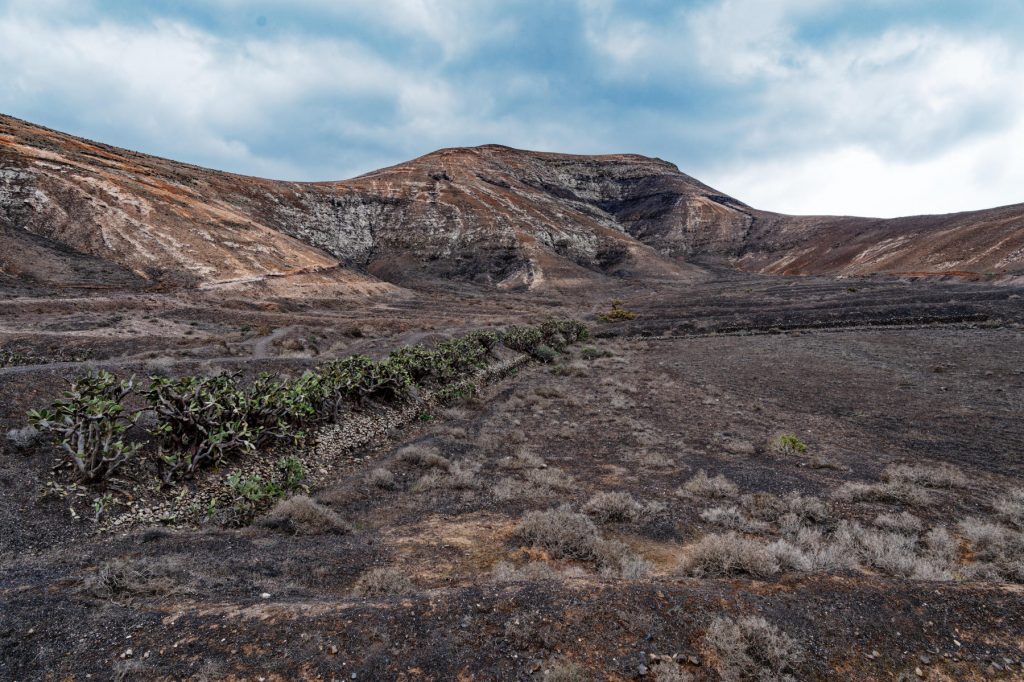 and over the town itself. 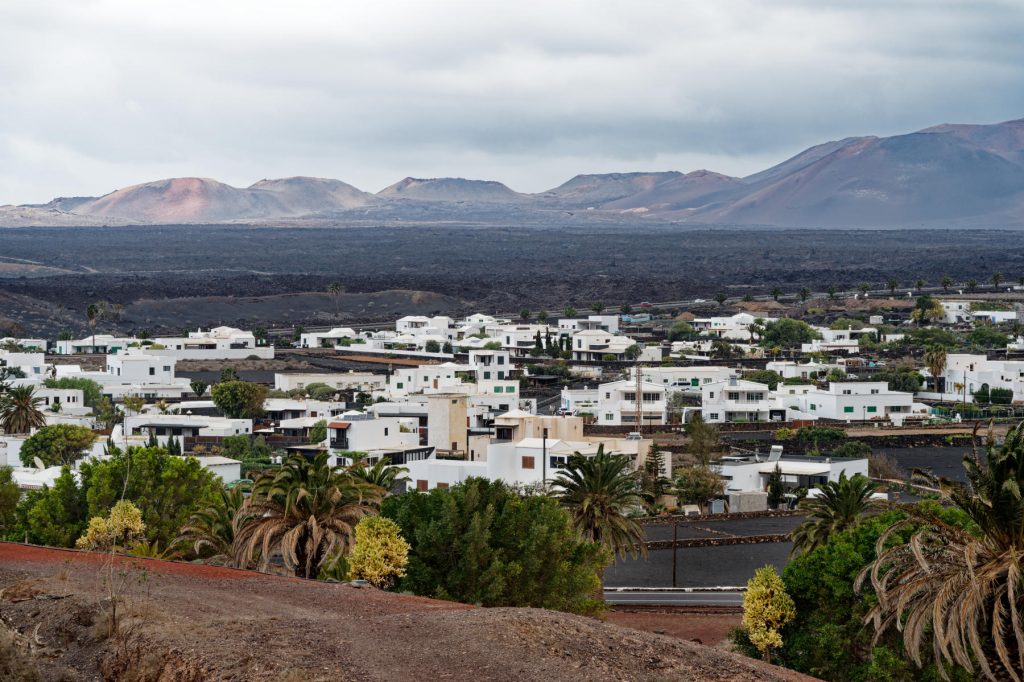 The trail we were walking was in the red lapilli gravel, and below the trail were two plantations laid out to commemorate the 250th anniversary of the catastrophic 18th century Timanfaya eruptions. You can see these to left and right of the following photos. 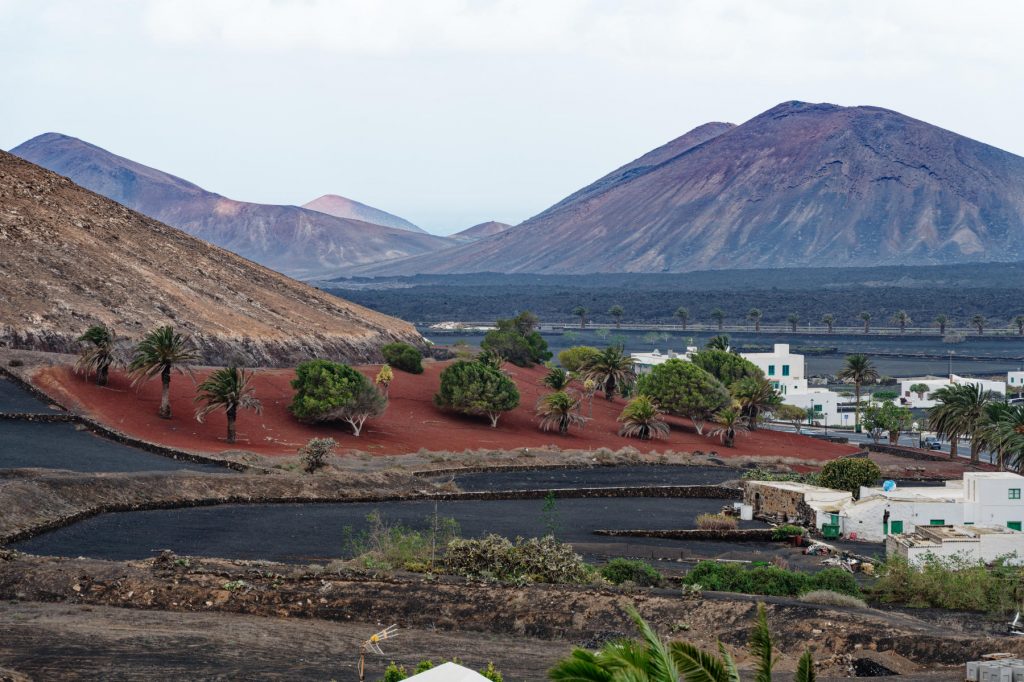 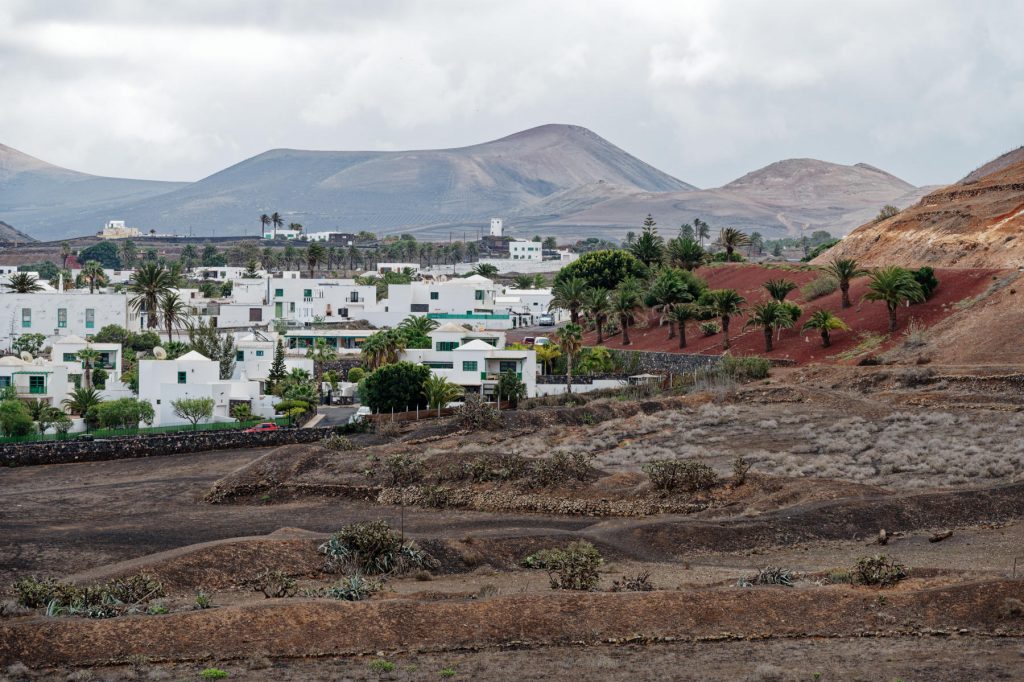 The town has a substantial football field, and, just by it we noted something that looked really rather niche – the Aloe Museum. 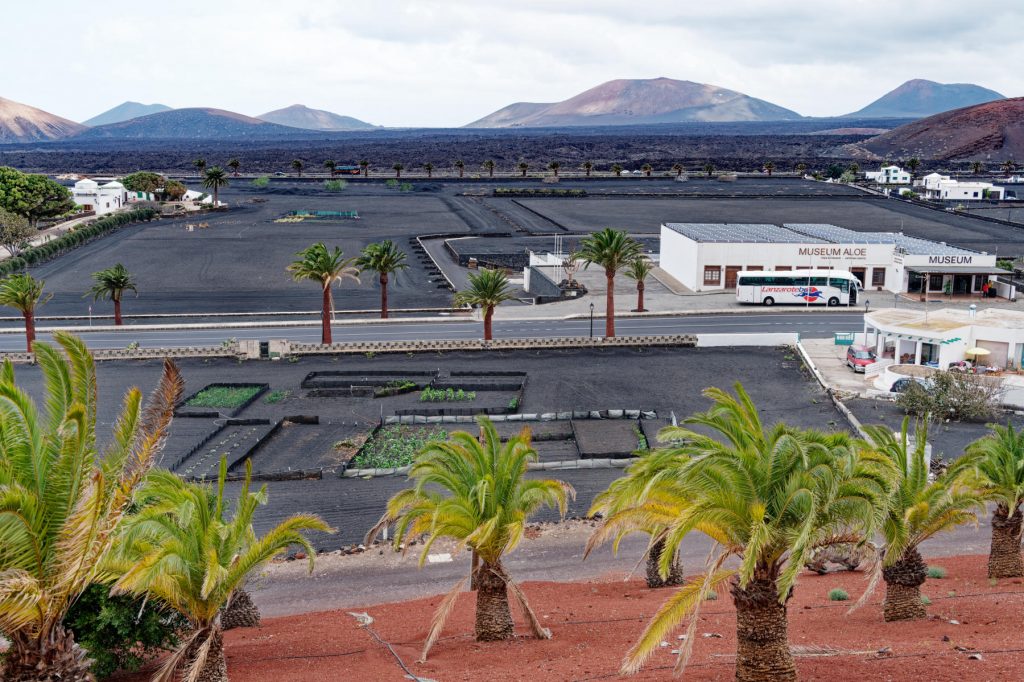 It’s not something that would normally engage my excitement, but: entry was free; and there was a tourist bus in front of it which meant it might have something about it; and we really had nothing better to do; and it had just started to spot with rain. So we thought we’d pop in and have a look.

It’s quite easy to determine its main purpose. 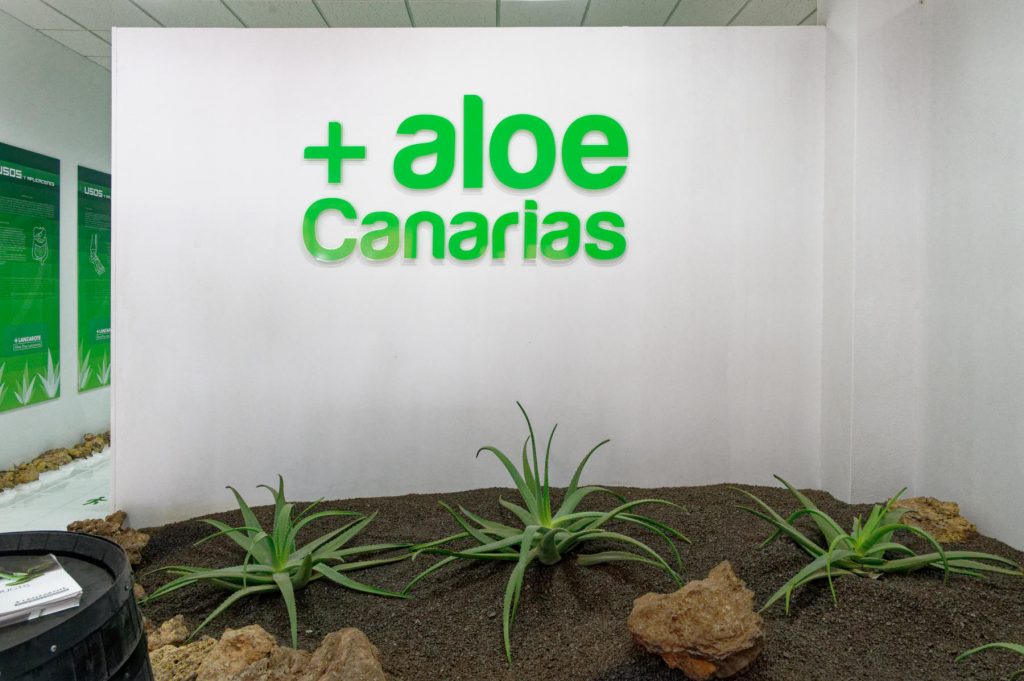 and it has a remarkably varied range of aloe-based products on sale. 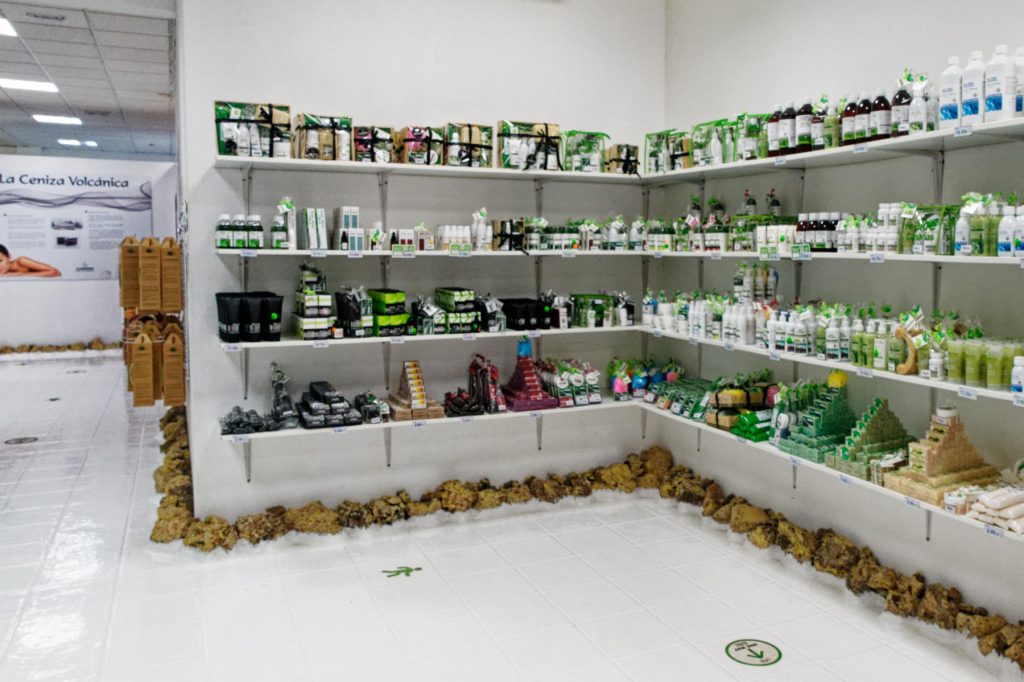 It was, though, much more interesting that I had thought it would be, because as well as paeans of praise to Aloe’s benefits for skin and digestion and as an anti-inflammatory, it showed the aloe extraction process, which I hadn’t known about. The really interesting bit was all the other stuff they had displays about – salt, cochineal, orchilla (purple dye) and argan (oil), each of which has a significant place in Lanzarote’s history and, indeed, its present.  So this idle stroll into a niche venue actually armed us with some more ideas for places to visit on the island and things to see; for example, we’d already seen the salt pans at Las Salinas de Janubio (you’ll have seen the photos in yesterday’s blog. Yes, you will. I’m sure) and there’s another one at Los Agujeros, called Salinas De Los Cocoteros, conveniently near other tourist boxes we need to tick.  We have added them into our list of Things To Be Seen When The Weather Looks Up A Bit.

We headed back to the hotel for some lunch as a temporising measure in case the weather cheered up.  It improved a fraction, and so we thought a further stroll might allow us to be slothful with no further guilt afterwards, and headed into the town to look at the church, Parroquia (Parish Church of) Nuestra Señora de los Remedios, one of the few buildings that doesn’t have a white roof. 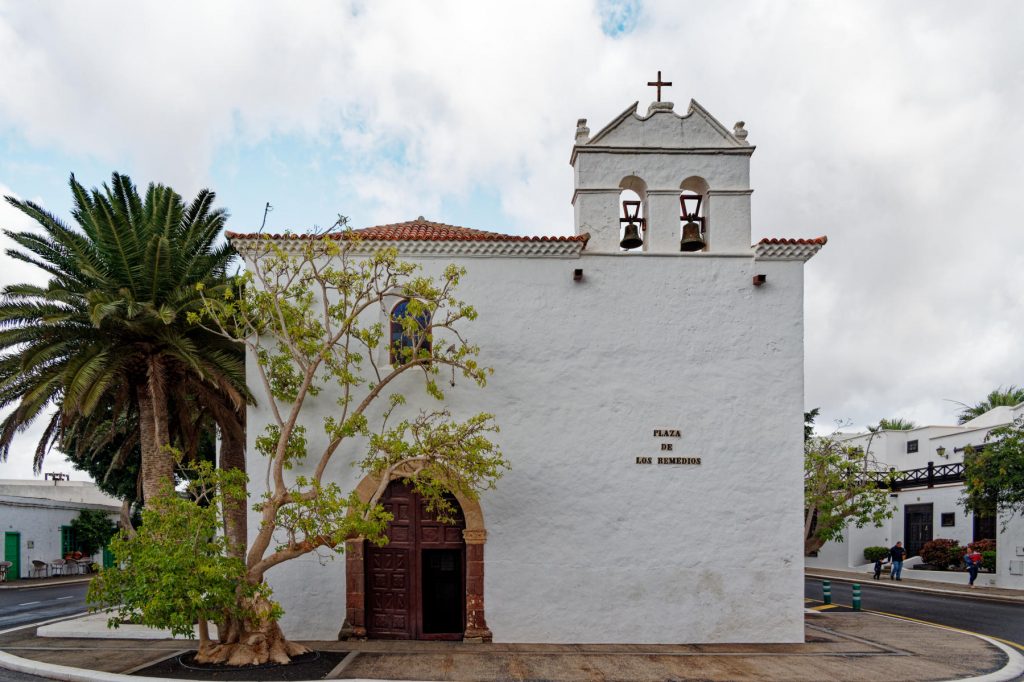 Inside, it’s quite striking, 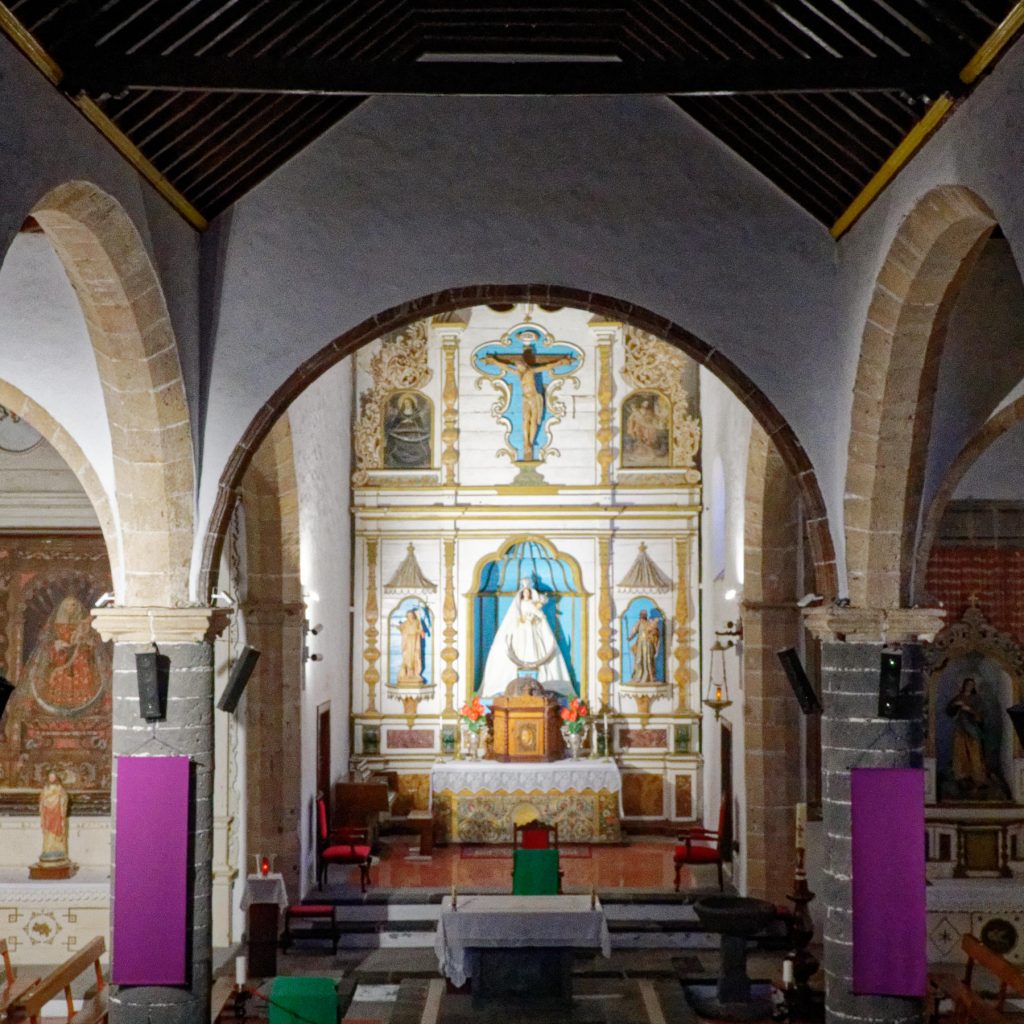 and the far end has a wonderful roof. 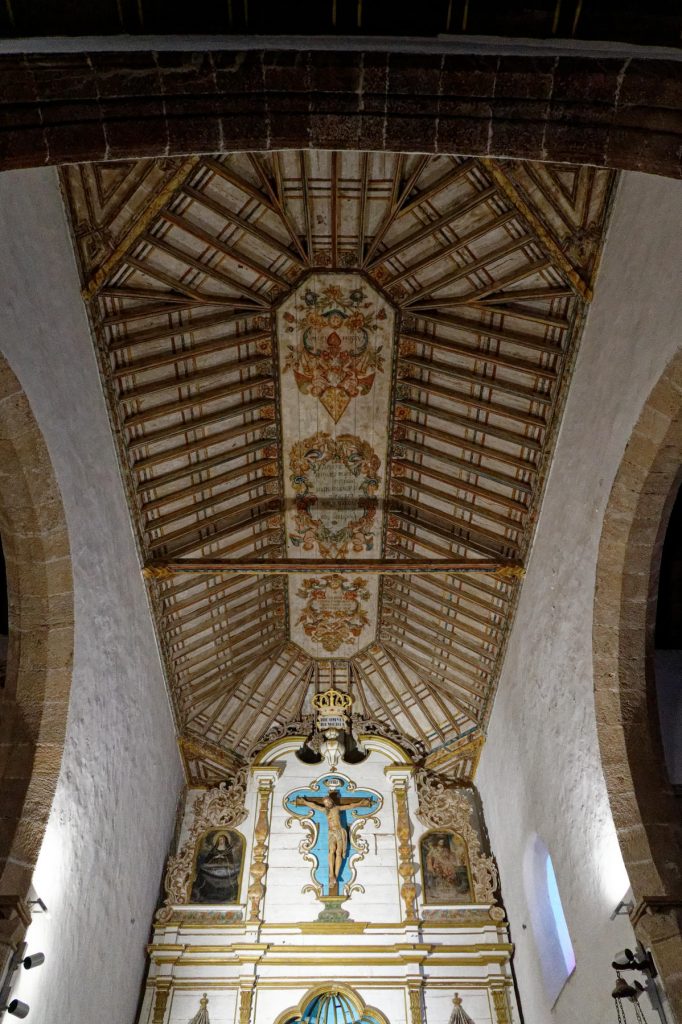 Our route back to the hotel was somewhat aimless, but took in a cactus garden 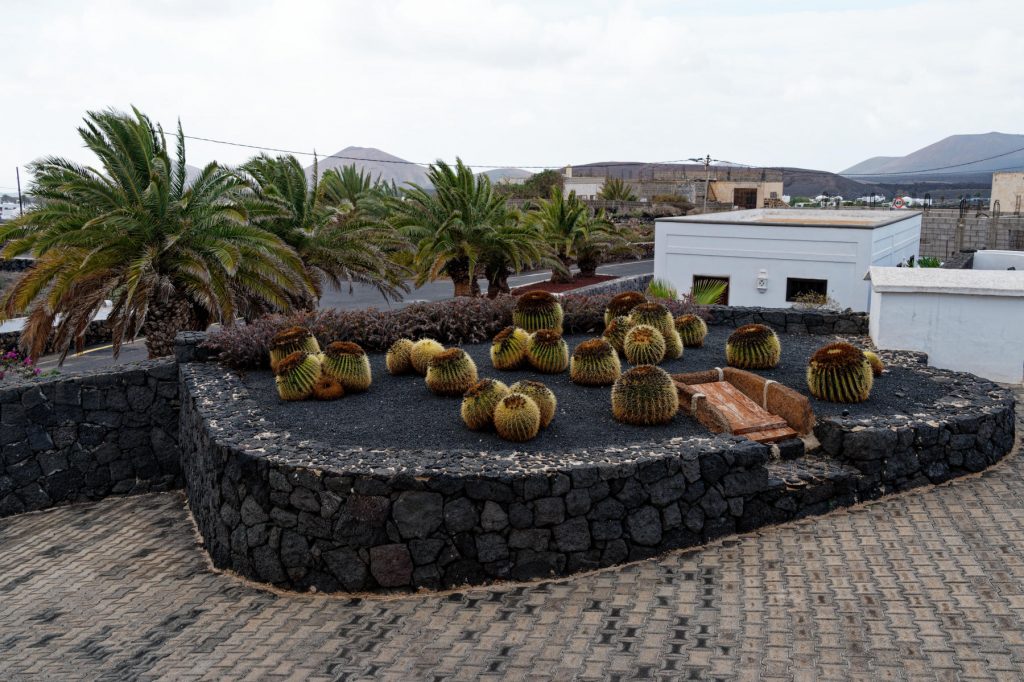 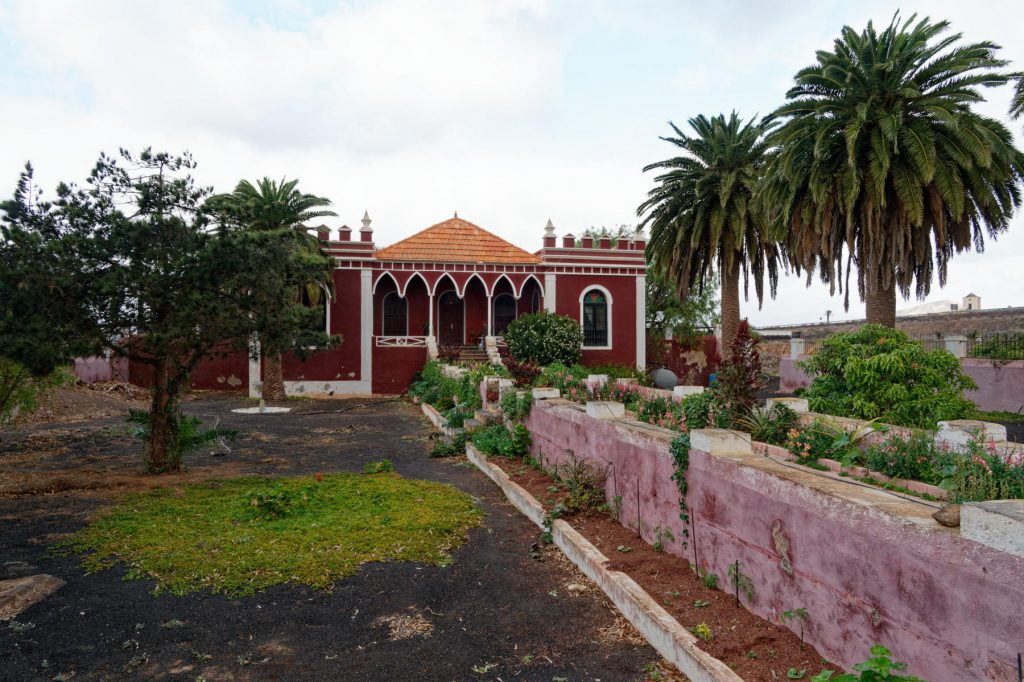 and various views of the town and surrounding countryside, 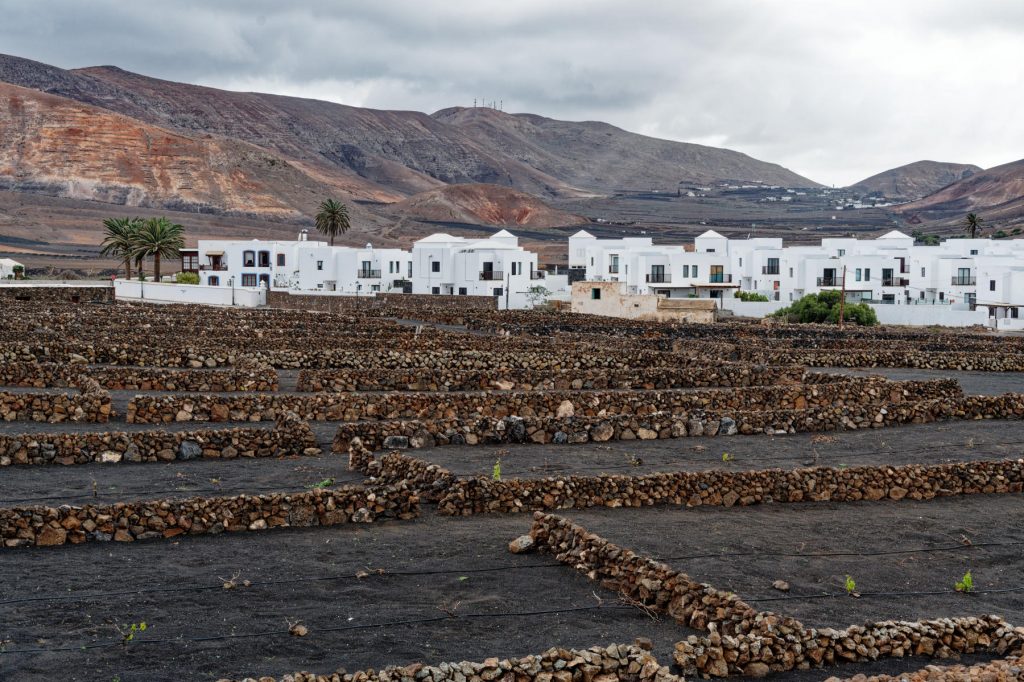 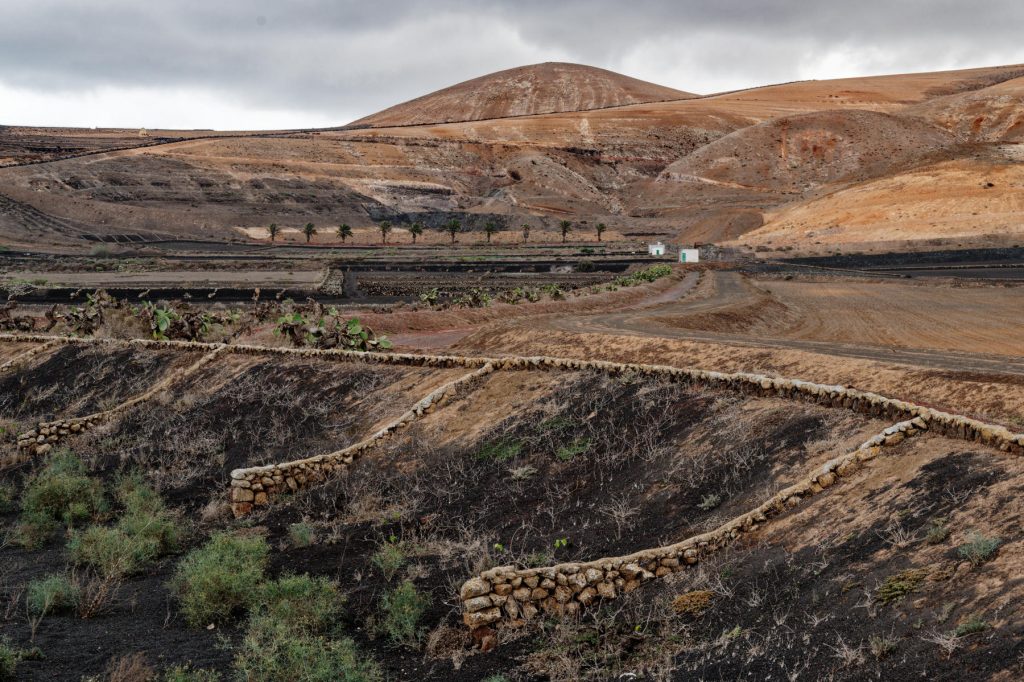 finishing with a nice view of our hotel. 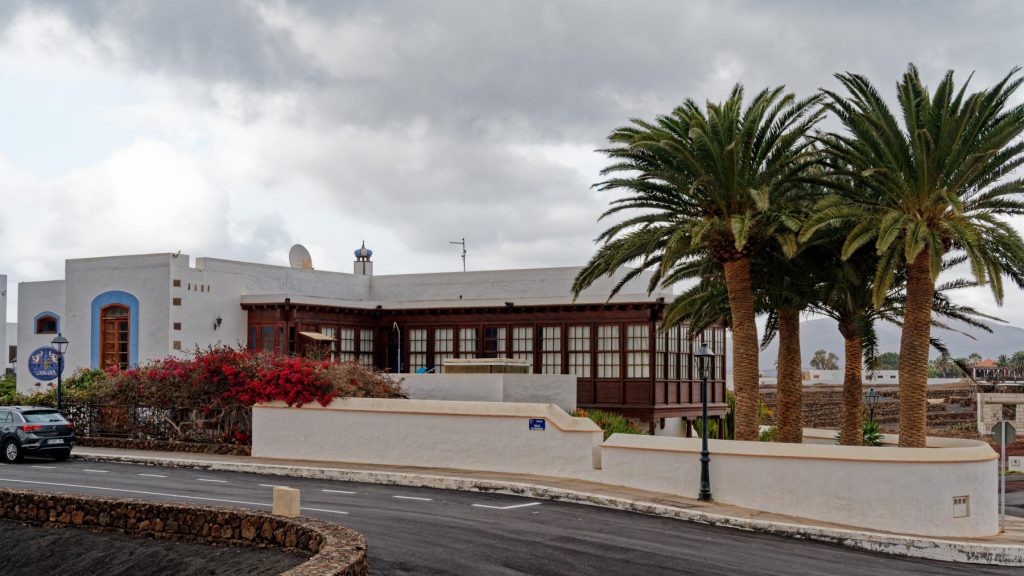 So, although the day had not looked promising for anything more than recharging the batteries, it actually turned out to be quite rewarding – four and a half miles strolled around, several photos taken, including the Necessary Steps, and some further inspiration for places to visit and things to see in the four days remaining to us here.  We’re looking forward to getting out and about to see them, so please check back in and see how we get on as the week progresses.