Tuesday 29th June – Bloody hell, where to begin?  It’s been a day full of new sights and cultural experiences, which arrived in relentless stream; it’s difficult to know where to start. So let’s start with a stream – or, more accurately, a river.

Having met Dagur, our guide for the next fortnight, at out hotel, we left Reykjavik and headed away from the city. The stark nature of some of Iceland’s scenery soon began to make itself felt, and I tried a couple of quick grab shots from the car as we went along. 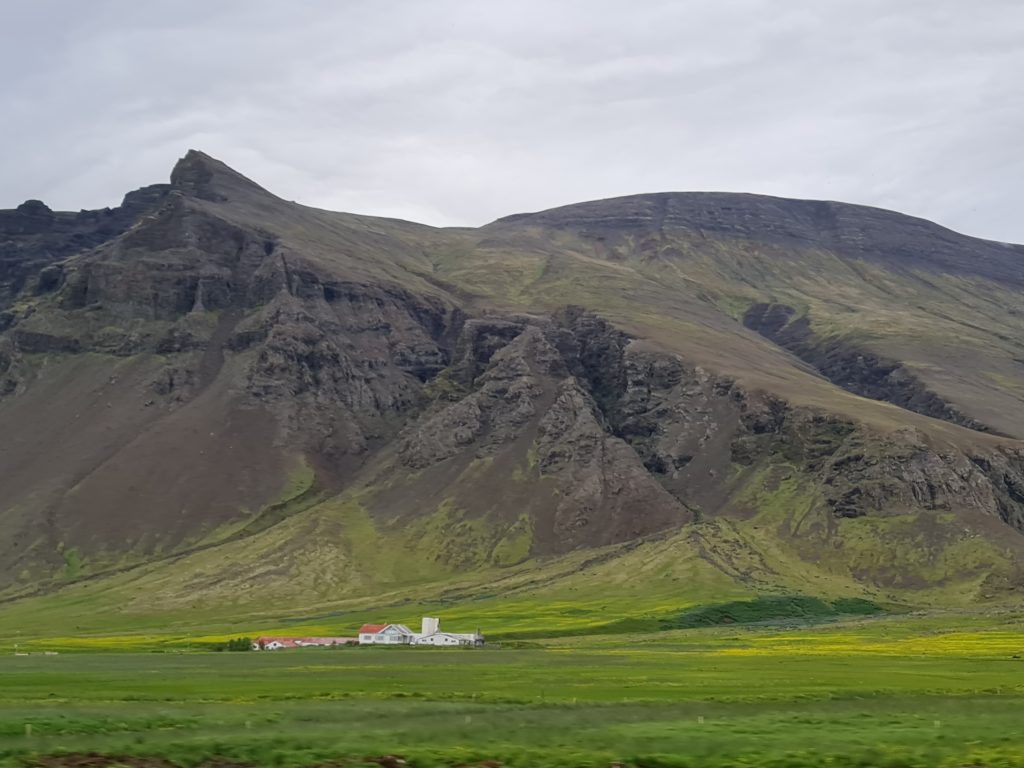 Dagur offered us the choice of sticking to the main road or taking the more scenic Road Less Travelled, so of course we opted for the latter, so soon  it was time for our first stop of the day 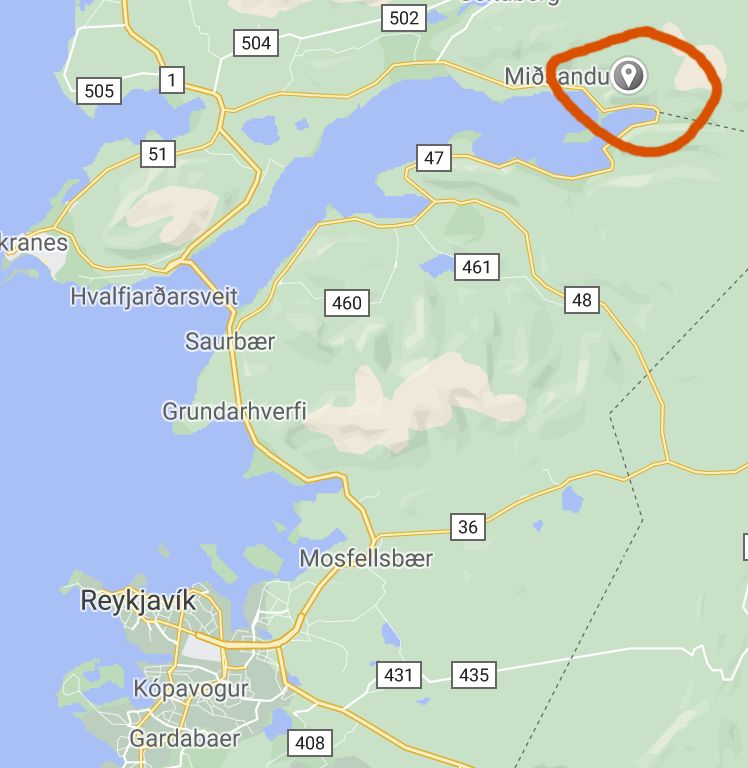 and time to take the first Proper Photos of the holiday with the Big Camera.  The scene was a stream, where a couple of people were fishing. 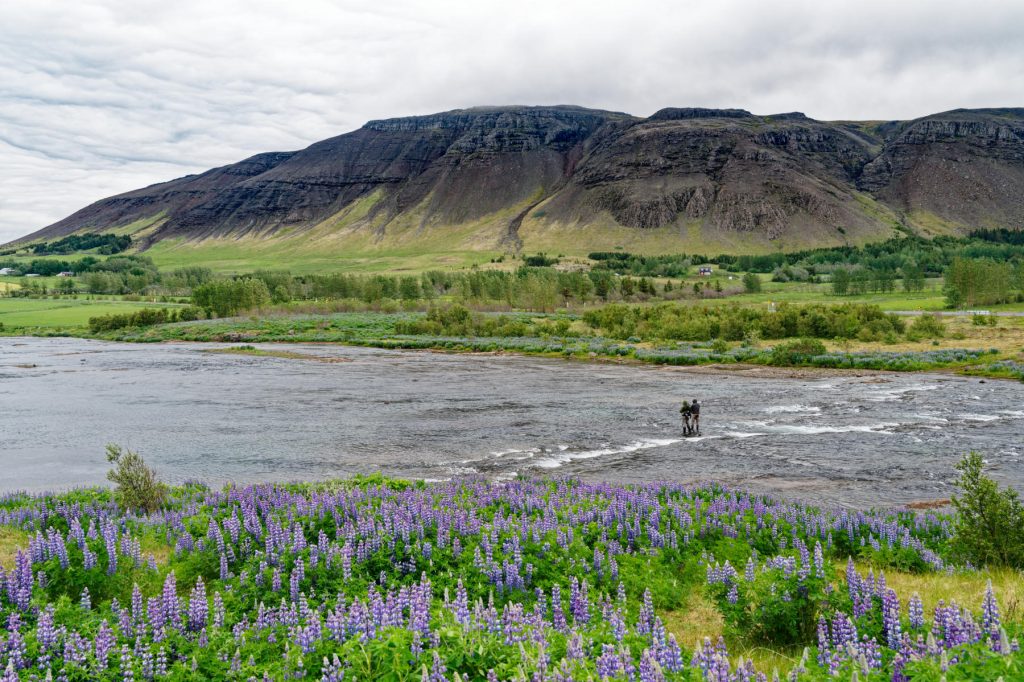 In the foreground are the famous (no, really) Icelandic Lupins.  These can be found in astonishing profusion all over the place, but started as an experiment to stop the black sand beaches from being washed and/or blown away.  Alaskan lupins are, it would seem, the only plant that can grow in black sand, so they were imported and planted on the sands, and have been successful in controlling the erosion.  The trouble is, they rather exceeded their brief and can now be found everywhere.  When we planned the trip, I had sort of imagined a dedicated excursion to see the Special Icelandic Lupins, but frankly it’s difficult to get away from them.  So I used them for an attempt at an arty shot. 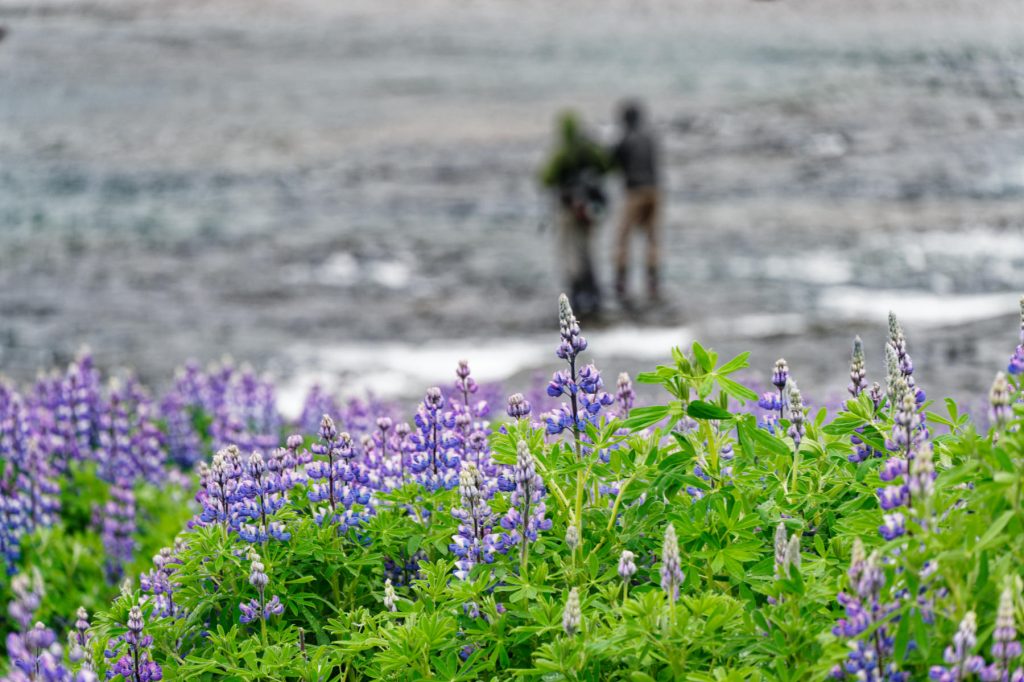 and then turned my attention to the stream the folks were fishing in, which, it has to be said, was pretty scenic. 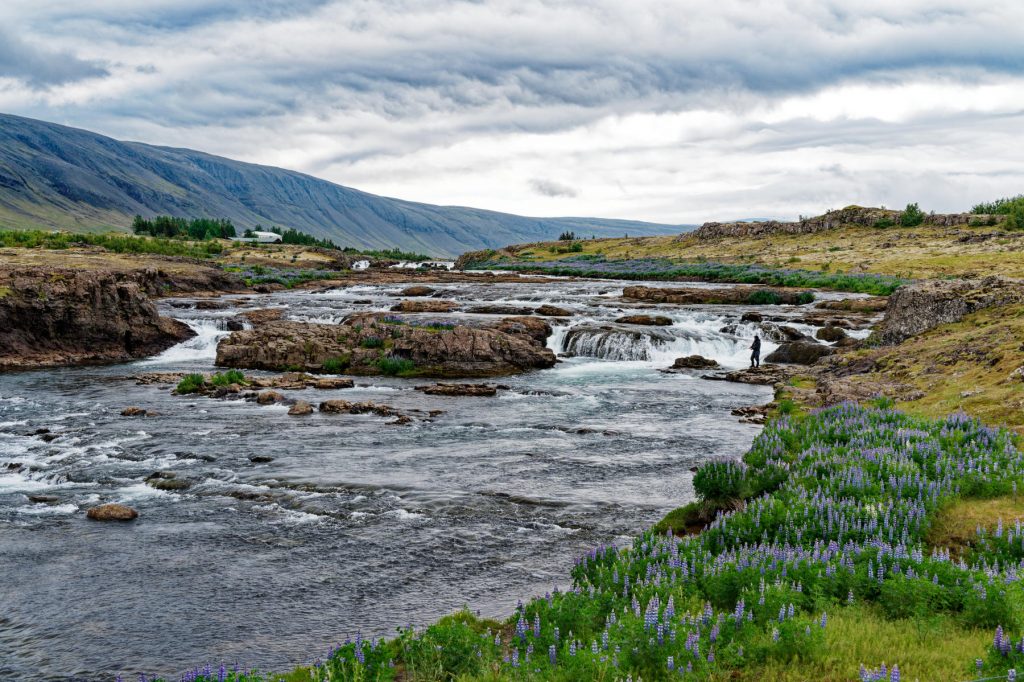 We then stopped at a viewpoint by the sound, looking back over an island 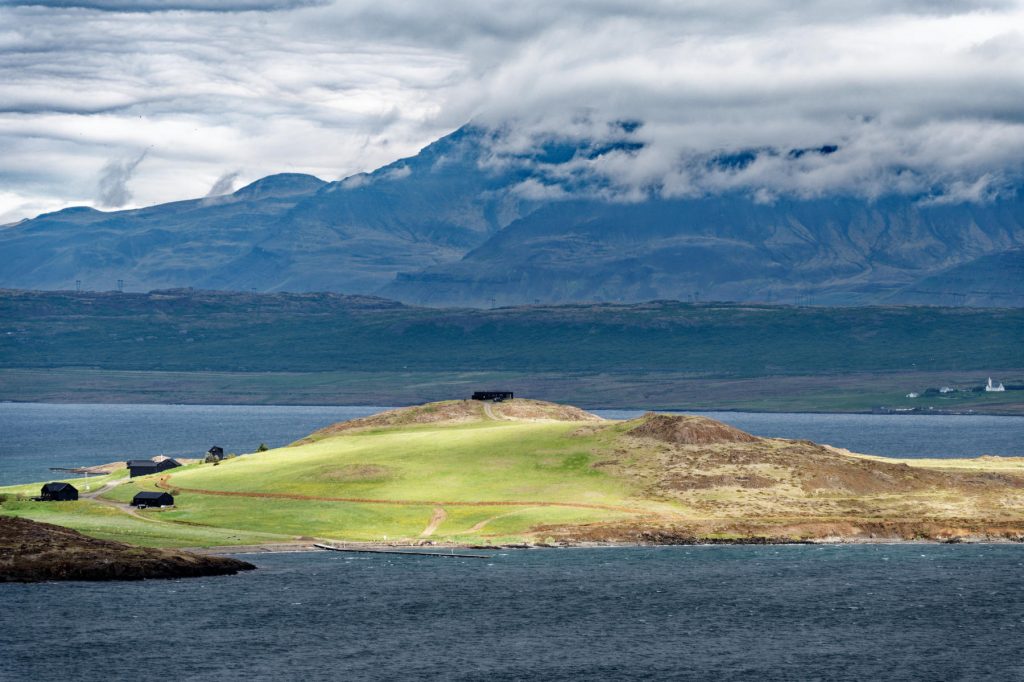 and at a very scenic spot where they used to gather sheep (you can still see the outlines of the walls). Please note that at this point the sun came out and the weather became extremely lovely. 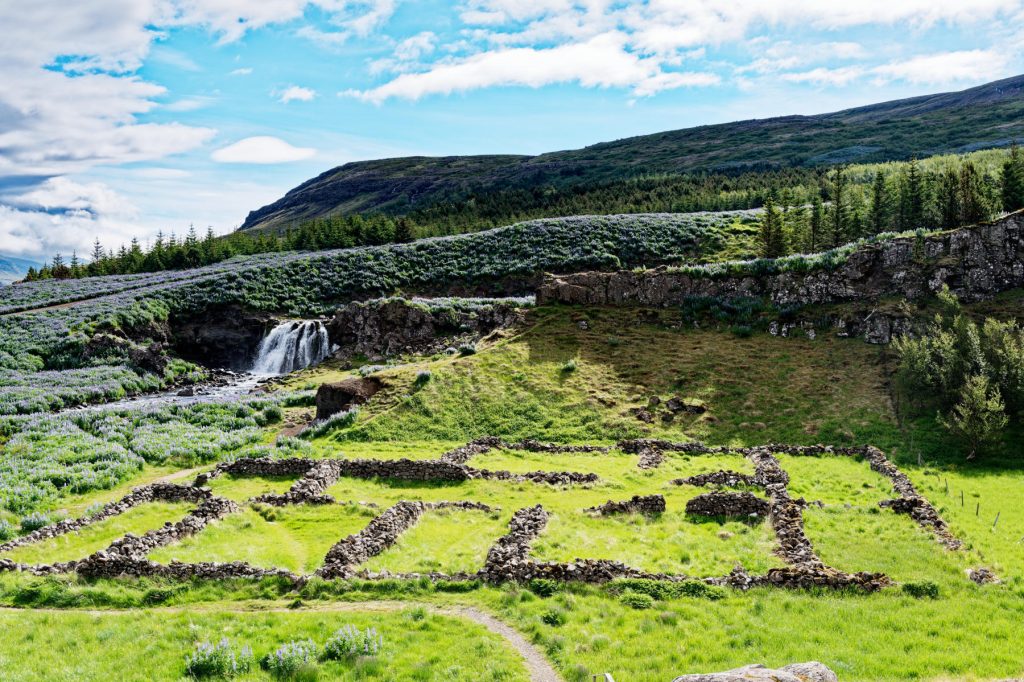 After that, we stopped to gawp at a geothermal spring at Krauma, where the water comes out literally at boiling point and has to be cooled before it can be passed on to be used for heating. 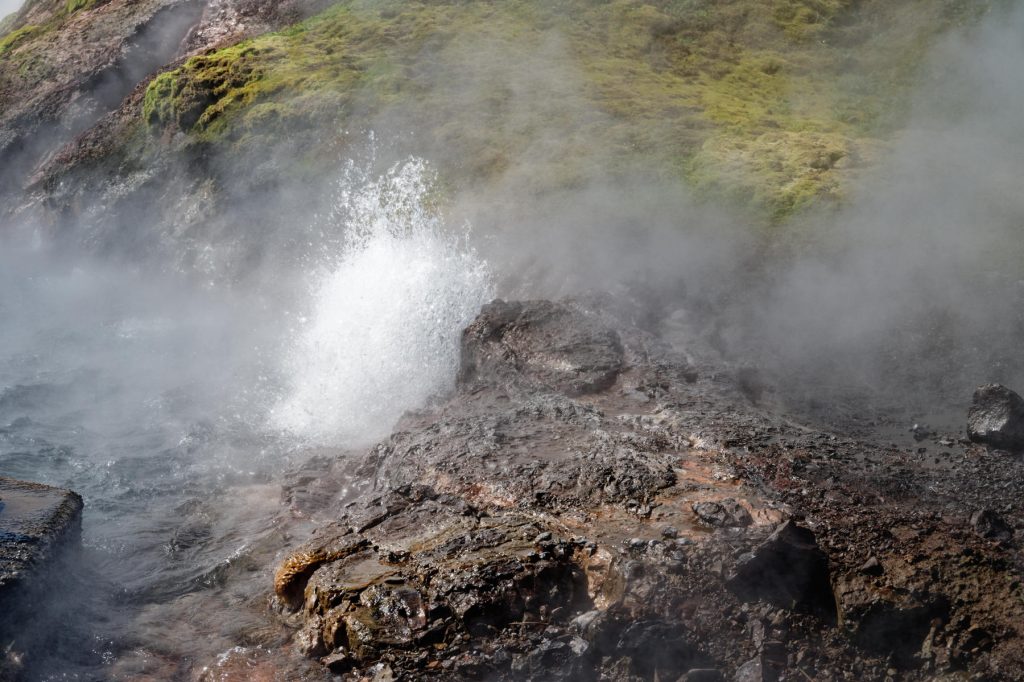 En route to the next stop, I took the opportunity to take some shots of the lupins to give some idea of just how ubiquitous they are, taking over great areas of fields 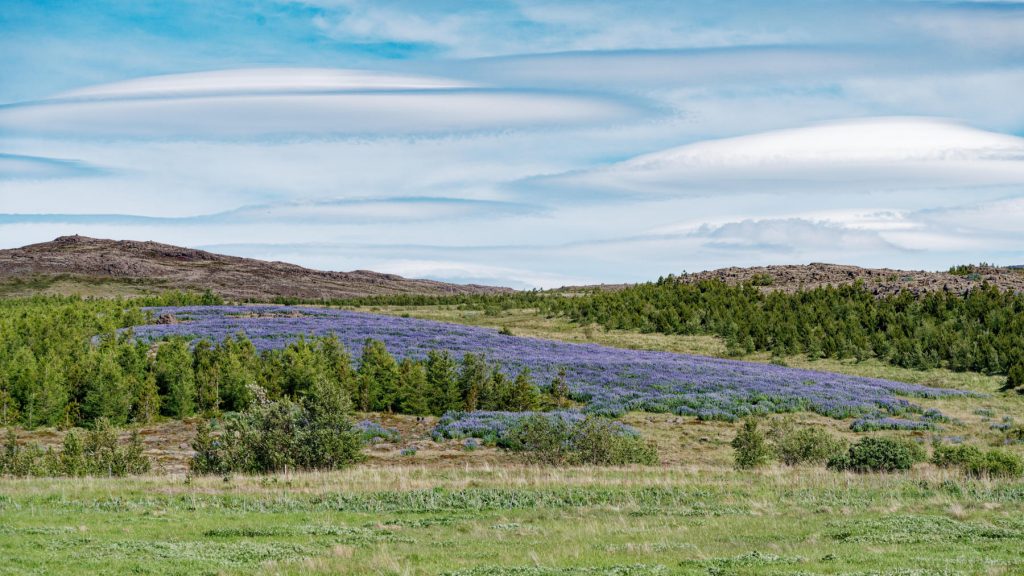 and growing in roadside verges. They’re jolly pretty whilst in flower, but that’s only for one month of the year. 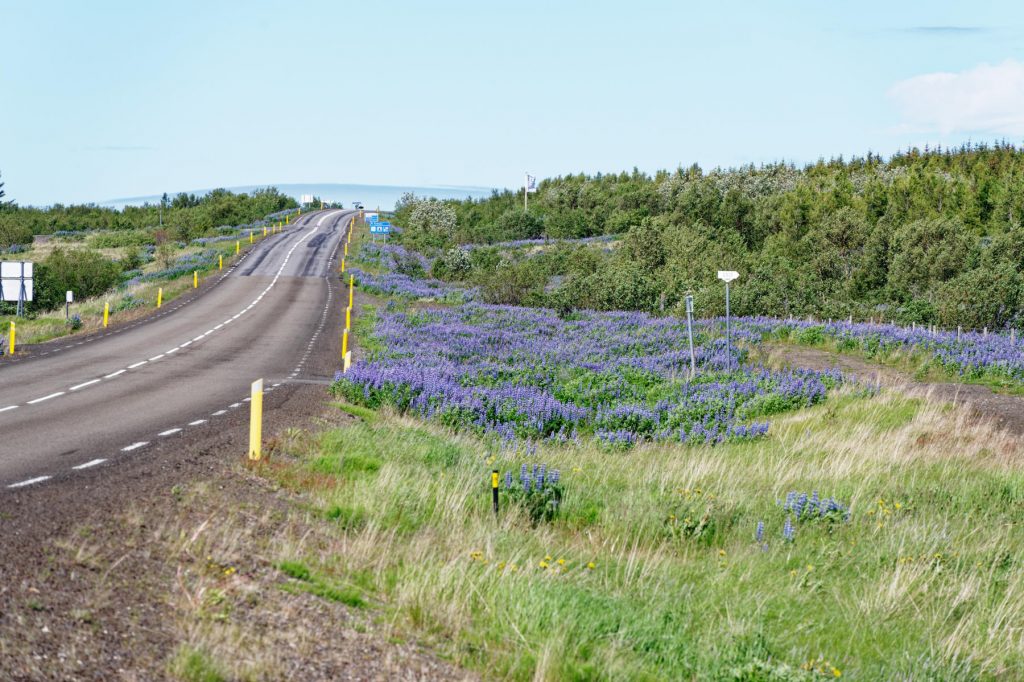 Our final port of call before lunch was to Reykholt, the historical home of one Snorri Sturluson, so-called “Homer of the North” and writer of many of Iceland’s medieval works of literature, including the sagas. The site has a modern church and museum (with associated gift shop, of course), to the left in the picture below, and, behind it, the old church. 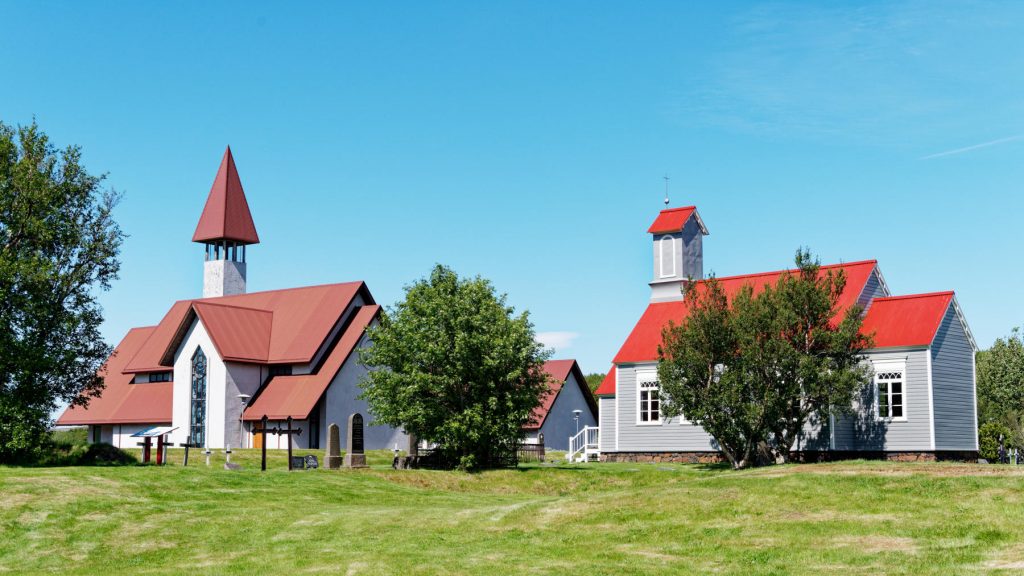 There was more to the site, but there was still much to see, so we pressed on. The next stop was at a series of waterfalls called Hraunfossar and Barnafoss (“Child’s Waterfall).  I’m pretty sure that we’ll see loads more waterfalls before the fortnight’s out, but these were pretty spectacular. 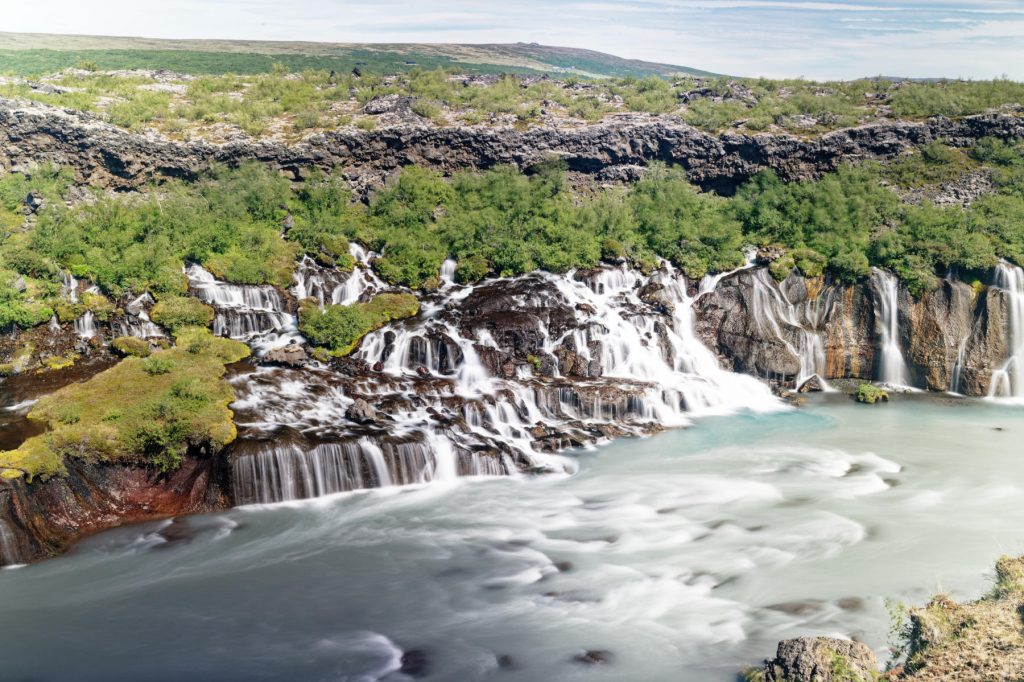 Then it was time for lunch and, when we resumed, it became clear that the weather was closing in. 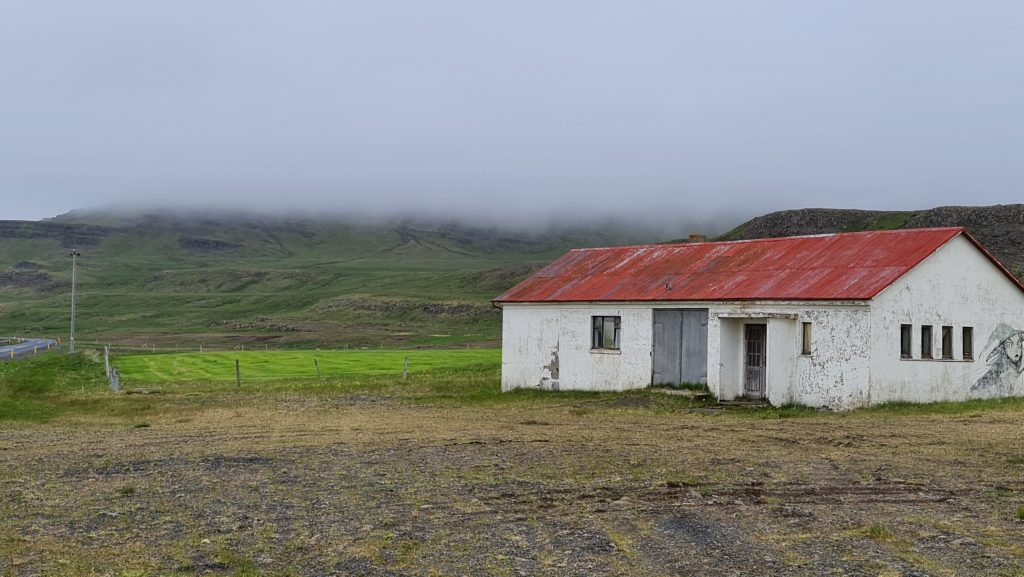 and when we got to the next stop, Ytri Tunga, the wind and drizzle were such that I declined to take my camera along as we trudged into the wind to see if we could see some seals.  With rain-lashed spectacles, I found it rather difficult, but Jane and Dagur could make out some dim shapes in the distance. 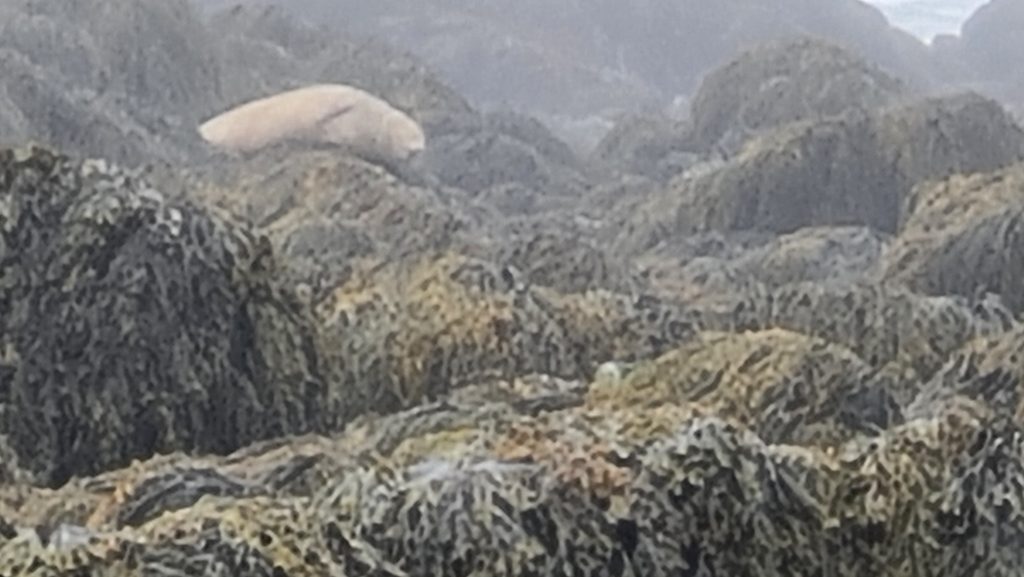 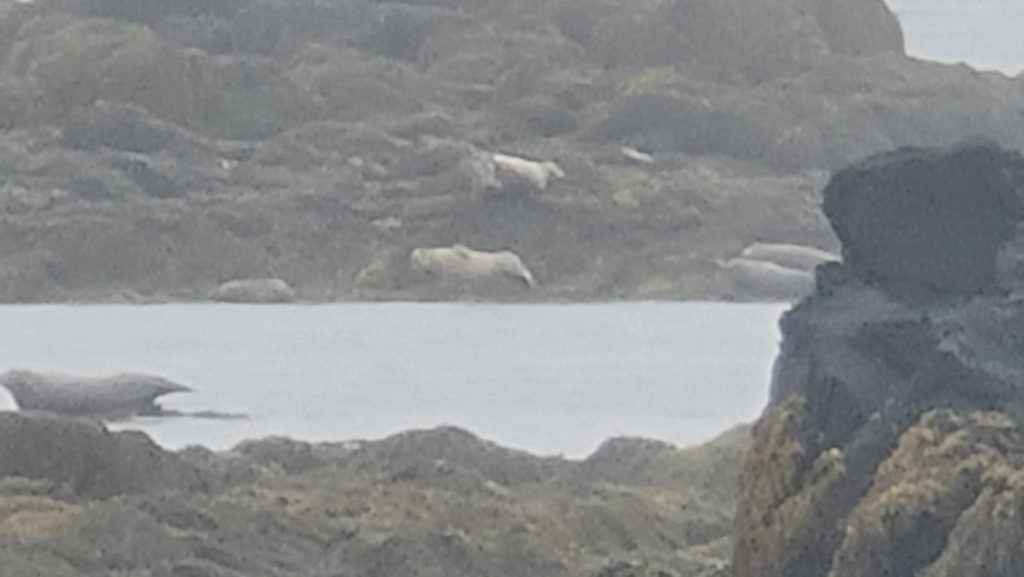 and it’s a great tribute to modern phone camera technology that I could capture these images, but I’d rather lost interest by this stage, and so was delighted when we reached our hotel for the night, Hotel Búðir, on the Snaefellsnes Peninsula. There was talk of midnight sun photography of the Black Church, but, frankly, since you could barely see the thing, I was grateful that we called it a day so I could retire to the bar.

The hotel is a destination location in Iceland, very well-run and featuring an excellent restaurant.  After getting embroiled in the bar in conversation with some other guests, we ended up sharing a table with an American lady called Sherry as well as Dagur.  Having drunk too much we therefore ate too much of the lovely food before retiring to bed and wondering what the next day would bring.  Perhaps you’d like to read the next entry to see what we discovered?

2 thoughts on “The first day – a step into the unknown”