Monday 28th June 2021. Both my wife and I had read many newspaper articles concerning likely apprehension about doing things that were once considered normal – international travel, visiting places and, you know, talking to people and that. And, of course, we completely pooh-poohed them because clearly that was rubbish…until we actually had to do some of these things. It’s not that we’ve lost the knack of talking to people or anything; we still had mastery of the basics of social interaction, but yet there was a definite tingle of apprehension in the air as we waited for our taxi. It’s been nearly two years since we last undertook a journey of significantly more than 50 miles, far less taken a step onto foreign soil; and we’ve lost the familiarity with the process (book the taxi, don’t forget the passports, tell the neighbours, etc etc) which is somewhat disconcerting. Add to that the other stuff that the pandemic has thrust upon us – pack masks, register your trip, arrange tests upon return – and it’s all too easy to worry that Something Will Go Wrong and we’ll spend our fortnight in the Keflavik departure lounge.

Our domestic arrangements, also, were slightly more complicated than for previous trips, though, thankfully considerably cheaper. Cheaper because we no longer had to engage a live-in carer for Jane’s mother whilst we were away; and more complicated because now we had to worry about practical things like leaving an empty fridge, cancelling the milk and turning the heating down. All first world problems, I agree, but still items that added to the general sense of excitement, adventure and slight terror.

Anyway: taxi arranged – it might have been nearly two years since the last one, but our local taxi firm still recognised our phone number and so knew what address they had to get to, which I found quite impressive; flowers watered; people organised to look after the house whilst we’re away; bags into the taxi and off we went.

In the end, the journey from home to aircraft was completely routine with two exceptions. The first was the wearing of masks, which one accepts as a necessary evil; the second was a pleasant surprise, in that we weren’t expected to check in our own bags at an impersonal terminal. We had a good old-fashioned visit to an Icelandair desk where a nice lady took our bags from us and handed out boarding passes. She also, it has to be said, checked our vaccination and Icelandic pre-registration status, so it was clear they were paying attention. 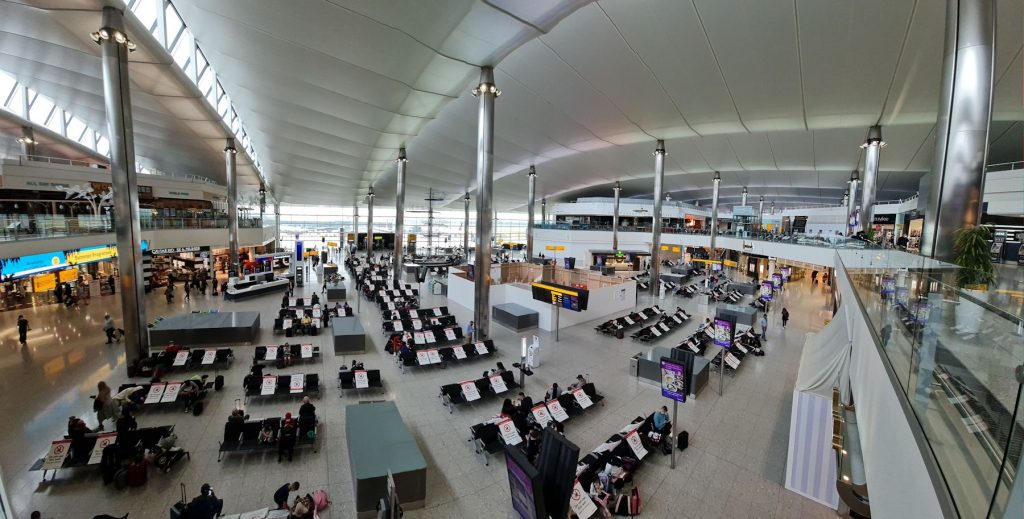 but The Powers That Be had still managed to arrange things so that the usual pinch points still featured a slow-moving queue. But all was well and we soon found ourselves, via a short detour to duty-free to buy some scotch for an old contact of Jane’s in Iceland, at the Caviar House and Prunier bar for our usual pre-flight indulgence. 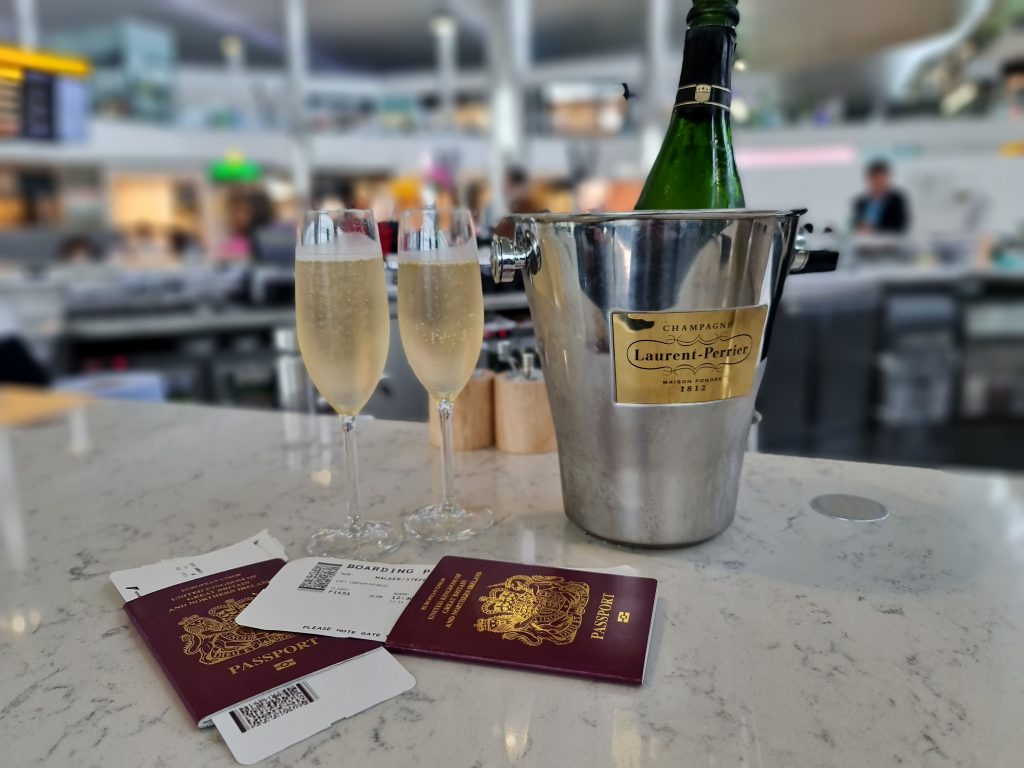 That was a nice brush with the familiar, as was our subsequent trudge to the departure gate which, according to my fitness monitor, was half a mile and which as usual was at the very furthest reaches of the terminal building. It was worth travelling in the walking boots, after all, and not just to save suitcase space.

Mask-wearing aside, the rest of the journey was exactly as it used to be in the Good Old Days. One could take the masks off whilst consuming refreshments and beverages, so I bought an extra beer to prolong the pleasure of being mask-free. The Icelandair 757 was perfectly comfortable, and, furthermore, provided an opportunity to be emotionally prepared for Icelandic (spelt “scandalous”) prices; two beers, an apple juice and a couple of tapas snack packs set us back £28. But it’s a holiday, so it doesn’t matter. It also taught me that Google Pay on the phone works even in airline mode, which quite impressed me, actually.

The flight was otherwise uneventful, and we came into Keflavik airport just enough ahead of time that they weren’t quite ready with the jetway. On the way in, we caught our first sight of Iceland. 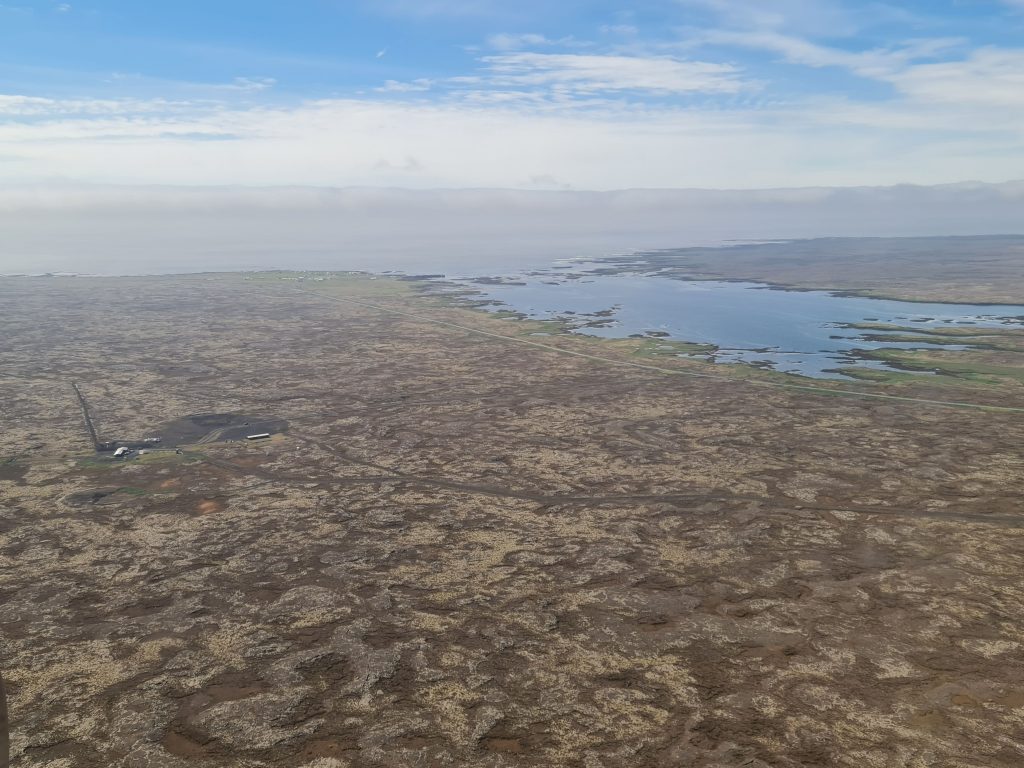 (Look, I know it’s an undistinguished photo, but I want to confirm that the sun was actually shining; I have low confidence that this will be the case for much of this holiday, so just wanted some blue sky for the record, OK?)

The transit through the airport was frighteningly efficient. We were able to produce the right paperwork to convince the authorities that we were probably not plague-ridden and then actually had to dash across the baggage hall to retrieve our bags from the carousel before they disappeared back into the bowels of the building. Our chauffeuse, Sandra, awaited us and we merely had to pop into the adjoining Covid test facility so that we could be swabbed before Sandra whisked us into Reykjavik. This was further than I thought it would be; over 50km. This was my first hint of the size of the island – it’s bigger than Ireland, which I was only just beginning to realise. En route, the terrifying efficiency of the Icelandic Covid response showed itself further in a text that said that I had to quarantine in the hotel room until I got a text telling me all was OK.

So here we are, in the Sand Hotel, in our quarantine cell. 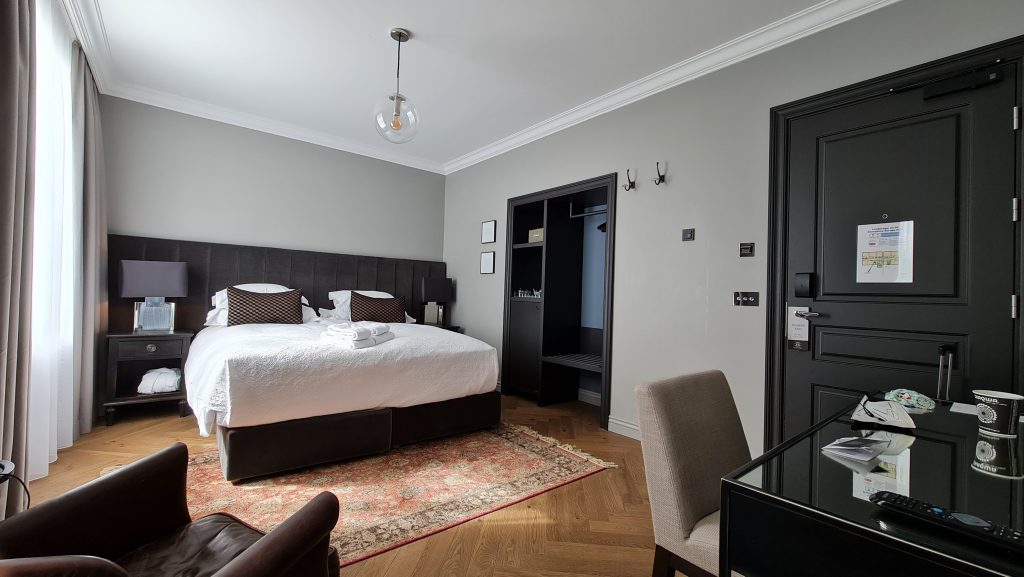 It has the facility to boil water and we brought our own teabags (just as well!), so we could do worse as a place to possess our souls in patience pending the release back into society.

Assuming that we are indeed not infected with the lurgy, our dumb luck continues – Iceland has just announced the removal of all Covid restrictions, so we will be able to enjoy the rest of the holiday without the cursed facemasks! Stay tuned to see how it unfolds….