If you’ve been reading this blog, you’ll have seen that I spent quite a time considering my photography options when going on a holiday to Spain. One of the options I considered was to take only my mobile phone and see what results I got. I didn’t, in the end; my camera backpack weighed in at over 12kg. Given that the major likelihood was simply to get tourist snaps, was it worth carrying all that gear? Yes, of course it was! But I did get a chance to assess how my Samsung Galaxy S9+ would have done as my one and only camera. And actually I wouldn’t have missed that many shots. I thought it was worth summarising my assessment for those who are interested in mobile phone photography.

Note, of course, that this is written about a phone purchased in 2018. At the time, the camera was among the best on the market, but times have moved on. Apple iPhone 11 and Google Pixel 4 have shifted the game on for those who are prepared to spend several hundred pounds on their handset. I think the following reflections are still valid at time of writing (October 2019) about mainstream phone cameras.

What, then, did I notice?

No real surprises here – of course a phone, with its much smaller sensor, is going to struggle if the light is not good. Here’s a marked example. I took a photo of the same scene, inside Palma Cathedral on Mallorca, on two different cameras – a Nikon D500 (RAW) and my phone (JPEG). I then processed them both using DxO Photolab 2 to get the best out of them and also to make them comparable in scene coverage.

This is the one taken on my phone, handheld. 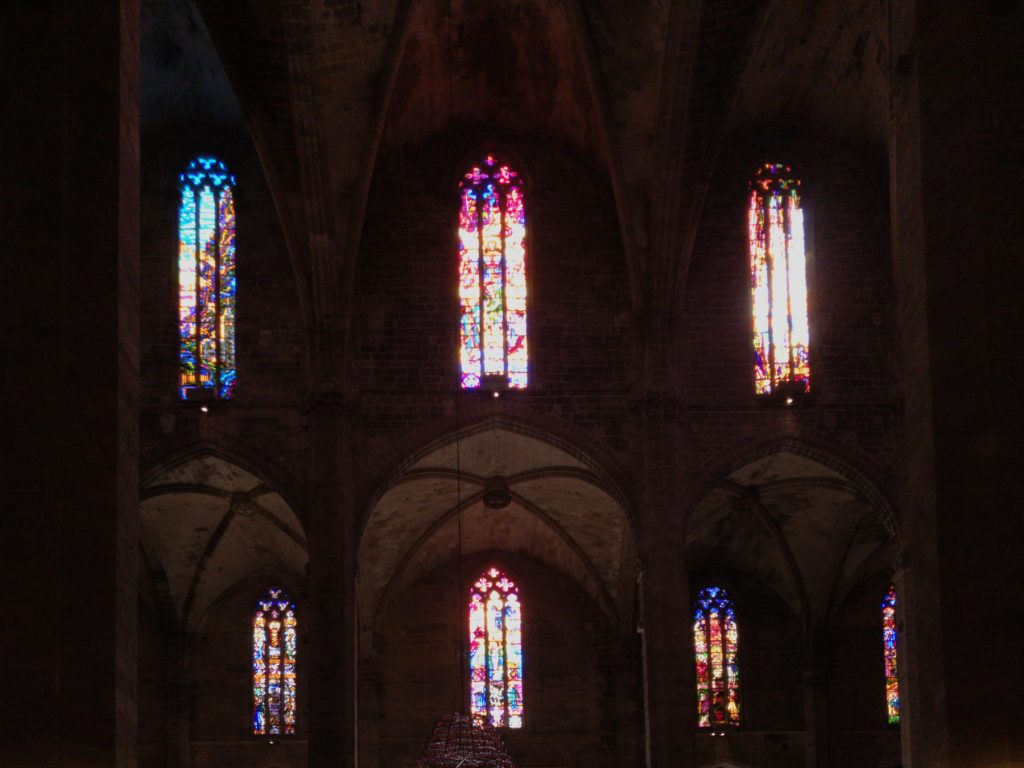 and here is the one from the Nikon. 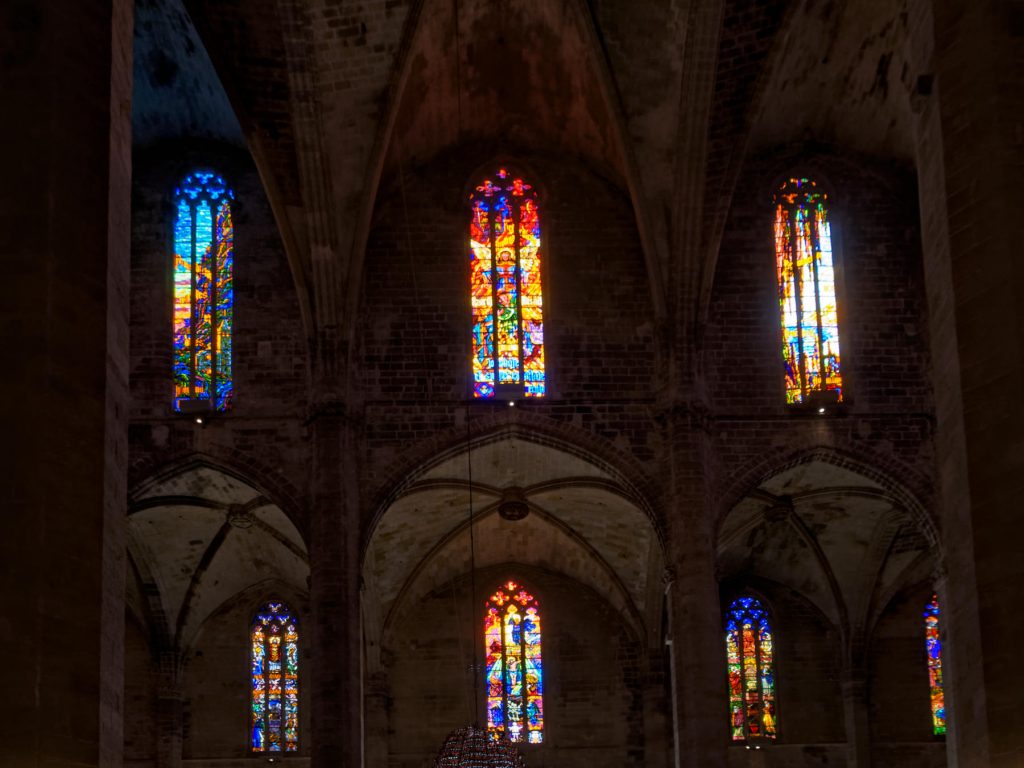 The difference in quality is immediately obvious, as one would expect. Actually, the phone did a remarkably good job, all things considered.

Here are two photos taken at Catell Bellver in Palma, again, one on the Nikon and one on the phone. 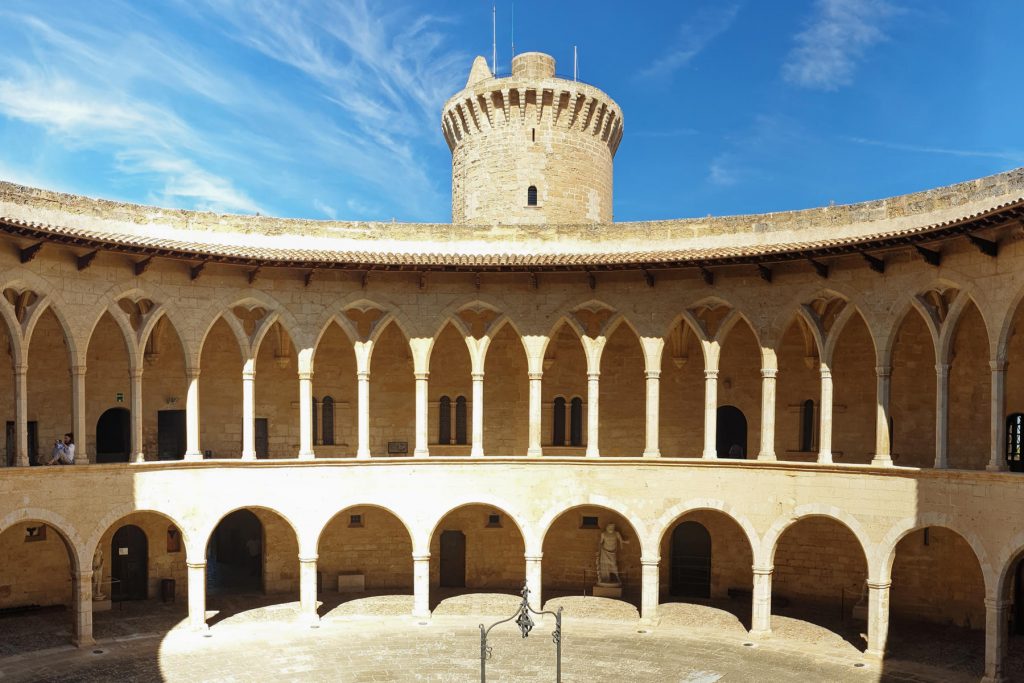 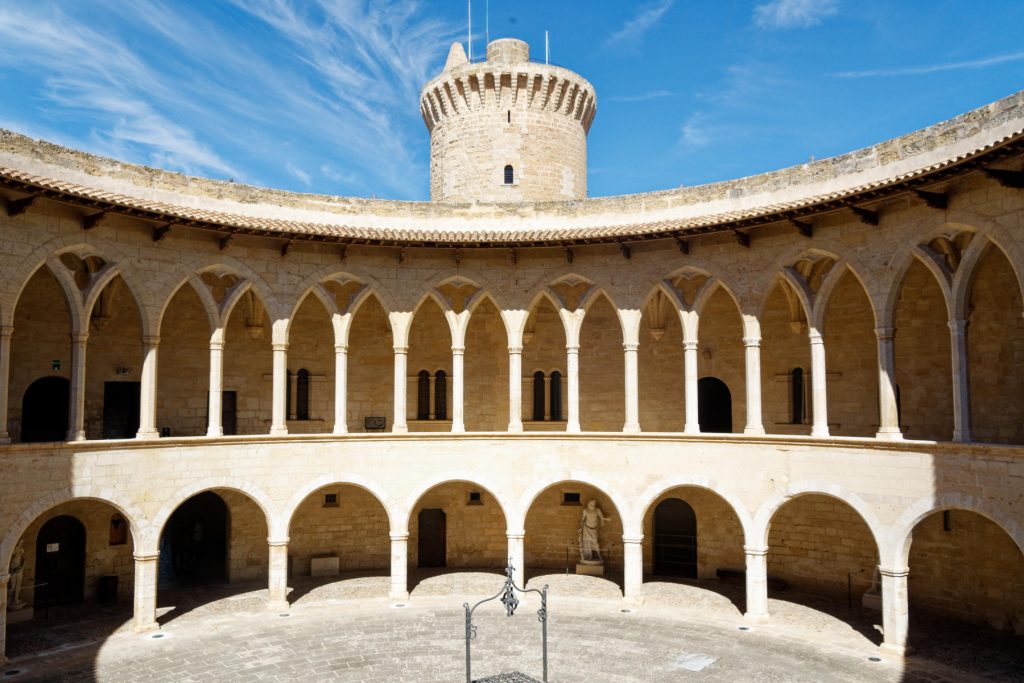 You can hardly tell that the first one is from the Nikon and the second from the phone, can you?

Well, actually it’s the other way round. The first one is from my phone and the second one from the Nikon. An expert would be able to spot that at once, but there really isn’t a lot wrong with the one from the phone – slightly blown highlights in bottom centre is all. Certainly as a holiday snap the phone did a perfect job; you’d have to be really picky to mark it down.

Here’s the actual complete image that the phone captured 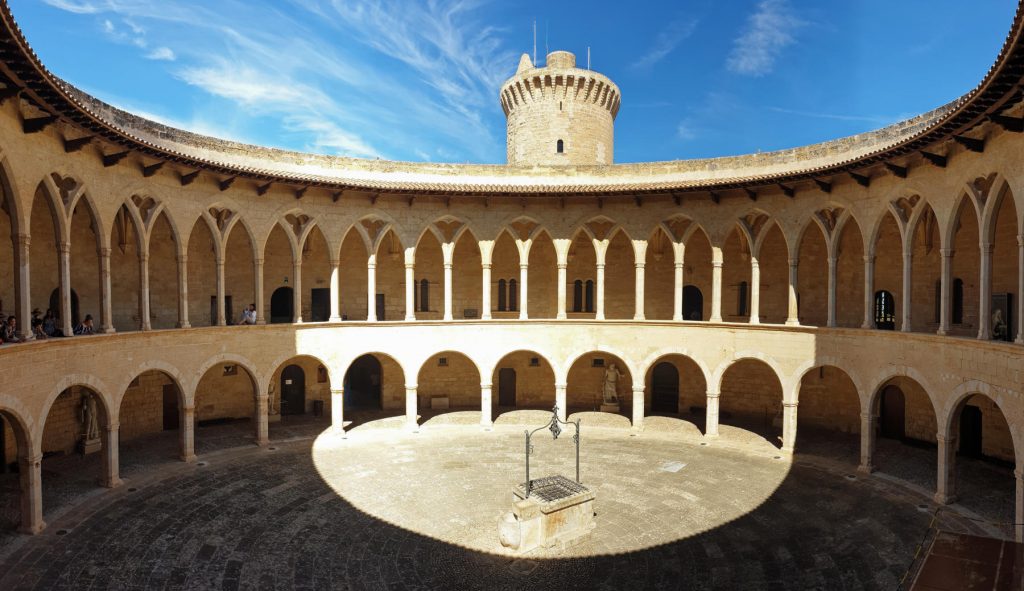 I used the inbuilt panorama feature on the phone in portrait mode (i.e. phone held upright) so that I got a much wider angle effect. And I think that, artistically it’s a more arresting photo.

I could have created the same thing with the Nikon, but I would have needed to change all the settings to manual, take probably a dozen photos and then stitch them together manually. I would have got technically a better image in terms of depth of detail, but at the cost of much time and patience. Definitely a win for the phone, here.

Now we come to the area where I believe it will be a long time before phones can catch up with larger cameras – taking photos of distant objects.

On our walks in the mountains above our hotel we noticed what looked like an observatory on top of a distant peak. Here’s the picture the phone takes of the scene with the phone in normal mode 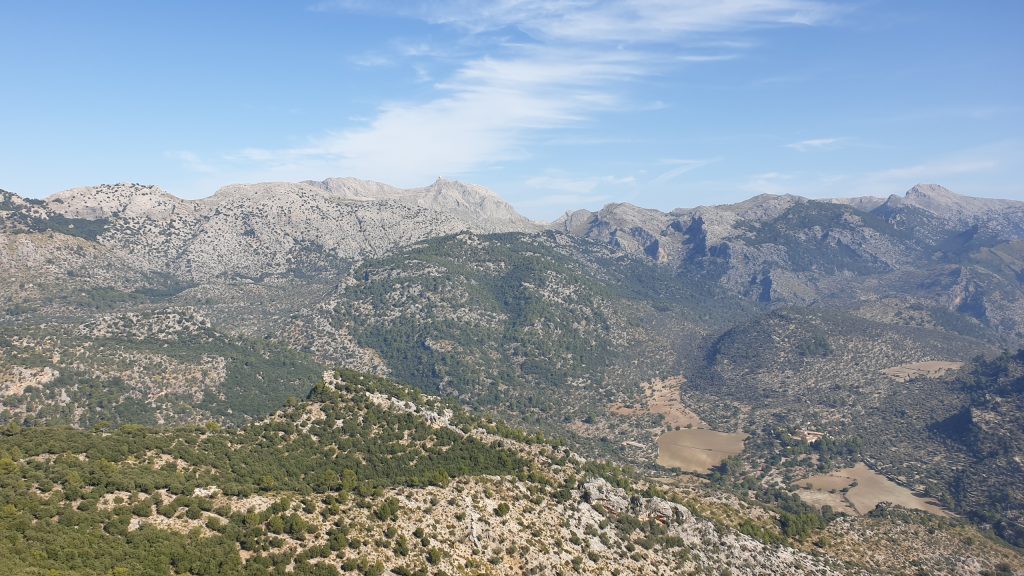 and you can’t really see the observatory at all. (Here, for comparison photos, is a similar picture using the Nikon: 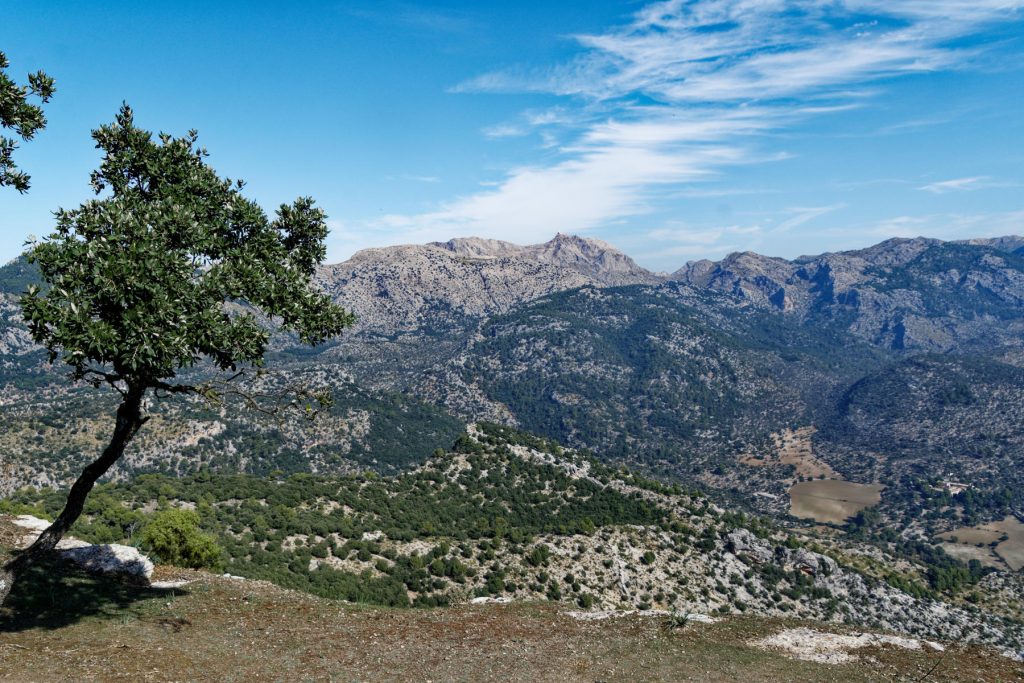 which has more detail in it but is not inherently a vastly superior technical capture.)

Now the S9+ has a 2x optical zoom capability; using it gives you this: 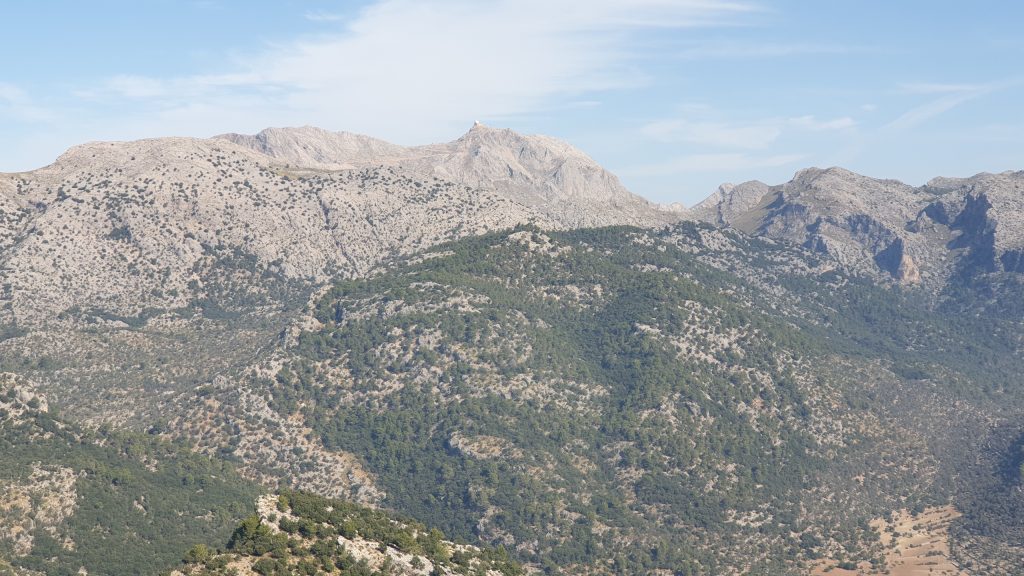 You can now make out the observatory. I had the Nikon with me (despite having to lug it up a bloody mountain!) and so was able to use its capabilities to get closer to the scene: 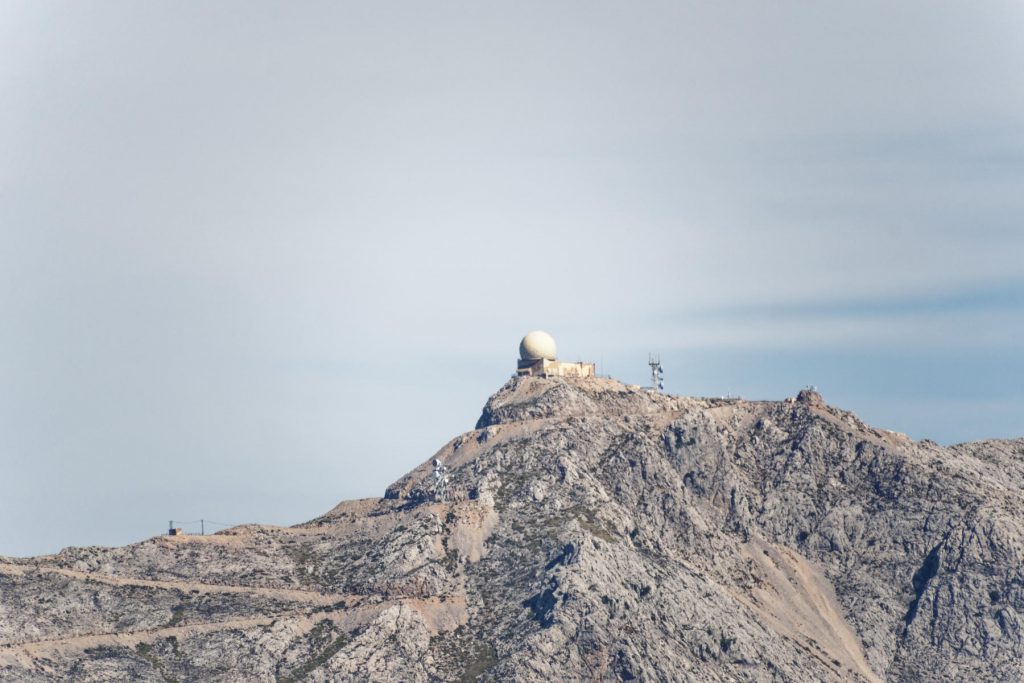 To be specific, I had a lens which was capable of a 15x zoom. To get that picture on the phone would have been quite impossible; I could have zoomed in by what the phone tells me is 10x but it’s a digital zoom and so the resulting picture would look like this 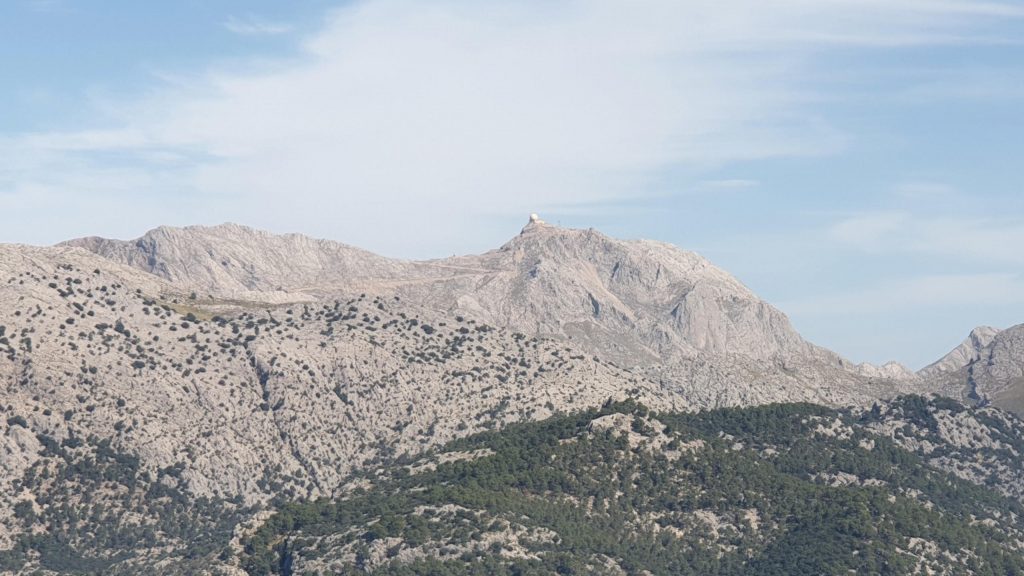 and if you look in detail, you’ll see blurring because of the phone effectively trying to make a small photo larger.

No contest. If I wanted to do even slightly decent video, (a) the Nikon D500 is not the right camera (it’ll do video but to be frank, DSLRs and video don’t really mix without a whole load of gear and a crew to wield it, and (b) even if I’d had my mirrorless Z6 – a better choice for video – I would have needed to lug gimbal or tripod with me as well). I could (and did) carry a small gimbal for the phone (an Osmo Mobile 3 – highly recommended) and get decent quality handheld video, such as this:

(I did take another camera with me for those occasions when video and zoom might be needed – a Panasonic TZ100 and a Zhiyun Crane M2. In Barcelona there was a particular event I wanted to capture and I knew that zoom would be needed and that combination did an OK job:

So, was it worth taking all that gear on holiday?

In sum, yes. I could have captured a decent set of images on the phone and they would provide good memories; but by taking a variety of gear, I got reasonably good results in a wide variety of situations – not perfect, not “professional”, but a lot better than I could have got using just the phone, and of a quality that I am happy to share publicly.

My shoulders ached, but my soul was satisfied.